Amanda Lew Kee more than memoirs of a gothic geisha

She showed a sampling of her collection at Mass Exodus this year to rave reviews, but even with such acclaim, Amanda's pre-preview jitters were strong. "I have a feeling that people will not show up until 8," Amanda remarked, which was the time the show was scheduled to begin. Like most shows, there is always a delay, but in Lew Kee's case, it may have been too long. 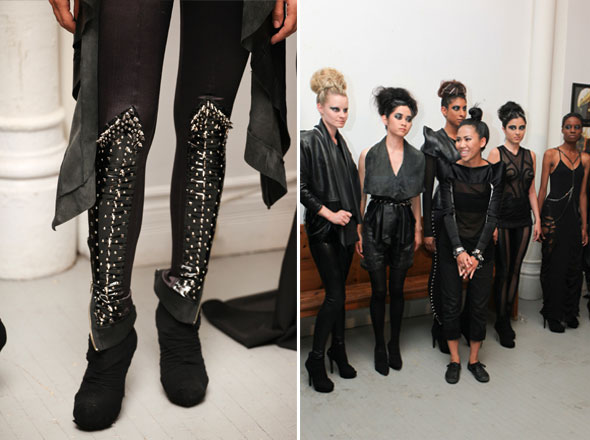 I became worried that spectators would lose sight of the spectacle, focusing more on the sweltering heat and lateness of the preview. I must admit that the sweat beading on my forehead had become a distraction, but the show -- whether on time or 30 minutes late, 0 or 40 degrees -- must go on.

And what a show it was. 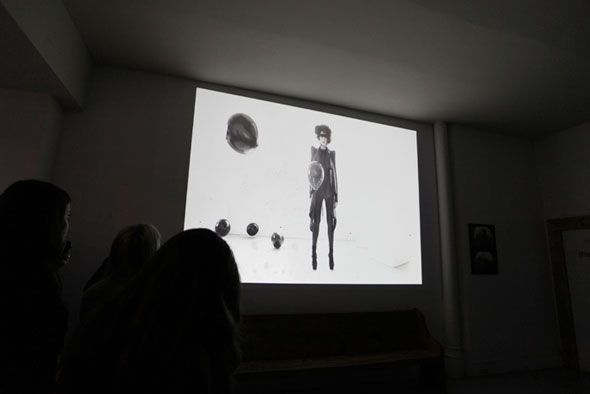 Lew Kee introduced her collection with a short fashion film directed by local photographer Felix Wong. Captured in black and white, model Nadine McAdam walked among oil-slick balloons, whilst showcasing the behaviour of the garments. Viva editor Paul Aguire-Livingston called it, "Memoirs of a Gothic Geisha," a fitting description that Lew Kee would later agree with. She waited backstage, clandestinely checking Twitter, hoping to catch a glimpse of some instant criticism.

The projected film came to a close and early remarks were tapped in 140 characters or less. With a generous splash of red wine hitting a guest's camel suede booties, -- as if a cue to reveal -- models began to walk out into the space. 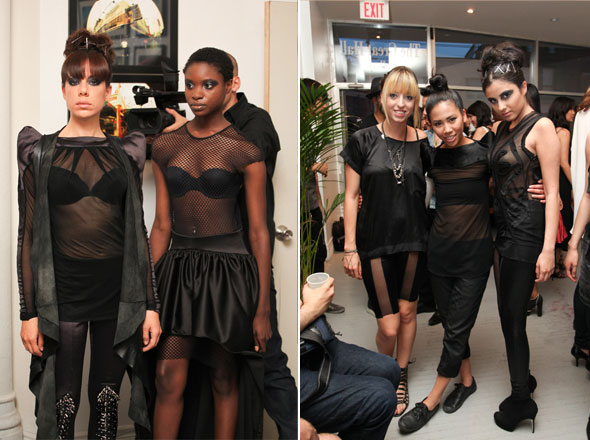 Lew Kee used stronger silhouettes, accented by Margiela shoulders and hard spike detailing. Everything was hand-crafted by Lew Kee herself and when asked if there were shoulder pads, she nodded and offered the chance to graze her own bold should. The essence of the collection was indeed, in the details. 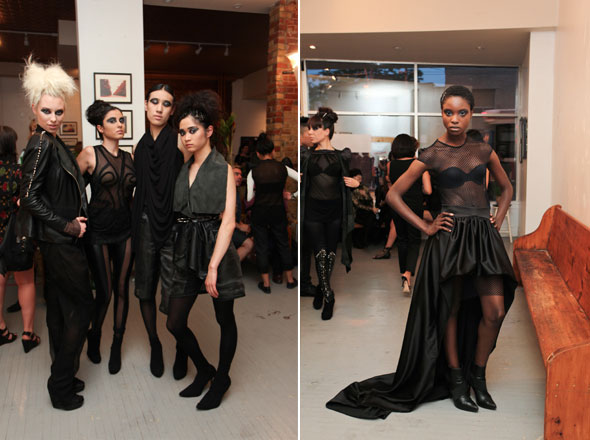 A unisex must-have is a chromed crackled pig skin jacket with zip-in nappa leather vest. Functional, practical and fashion forward, Lew Kee's designs showcase her fascination with trend items -- a patent leather peplum skirt is a variation of a seasonal item-of-the-moment and will suit the more adventurous fĂŞte fatale.

Hardcore spiked leggings are built to last. Spectators tugged at the chrome spike detailing to test the resilience of the tough girl accessory - unlike most shows, where there is a 'look but don't touch' attitude, there is an obvious pride that Lew Kee takes in her construction. Layers of chiffon and leather are too rich and beautiful to escape my greedy hands and each piece is buttery soft to the touch. 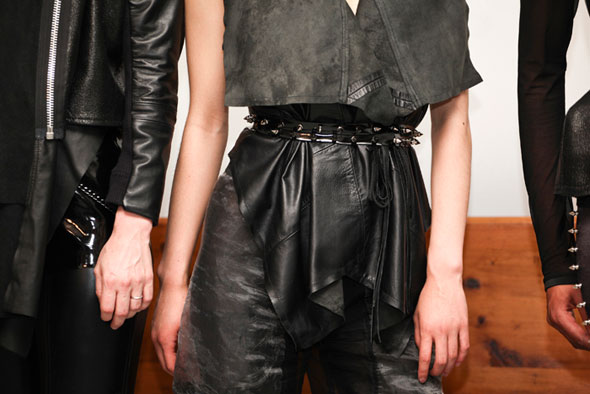 In a never-ending season of black-on-black-on-black, Amanda Lew Kee has created pieces that fill a void in Toronto's marketplace. She is among a handful of young Toronto designers who are showing near-international level designs, a feat that should be applauded.

Recent gossip discussed Lew Kee's acceptance of a design position with local splatter-queen Ashley Rowe, but Amanda informed me that she has decided to see where her own brand will take her. As she boldly enters the Toronto arena, I hope to map the evolution of her designs. As trends change, so will she -- and next time, I'm hoping for a bit of colour.