The Re-Birth of the Barber Shop

Whether it's a massive, light-filled space with big TVs on the walls or a tiny storefront with a couple of chairs, the barber shop looks like it might survive into the next few decades, and not disappear from our streetscapes along with TV repair stores and newspaper stands. A number of new stores have set out their red-and-white-striped barber poles in the last few years, owned by or employing young barbers intent on providing shaves and haircuts, even if the price is no longer two bits.

The window of Mankind on Richmond Street features a shrine to the barber shop - a 1953 chair sitting on a checkerboard floor, where customers can get a straight razor shave in a period-appropriate setting, quite distinct from the rest of the space, with its barnboard walls and flat-panel televisions. Jason Culala opened Mankind a month ago with Noel Naguiat, hoping to provide a high end barber shop experience for men happy to be pampered, but not in a unisex salon setting.

"The straight blade shave is almost like a man's facial," Jason explains, and I have to concur. I didn't shave myself for the whole of the '90s; I didn't even own a razor, but preferred to tour the city's barbershops trying out their razor skills, and enjoying the deeply relaxing ritual of the pre-shave lotion, shaving foam and bracing splash of aftershave, punctuated by hot towels. Mankind's shave is deluxe - an 18-stage process that takes 45 minutes and costs $65, but Jason says it's popular with the shop's clientele, who might even go one step further and take a seat at the manicure bar in the shop's "manctuary."

Over at Blood & Bandages on College, Roger Janes describes himself as a refugee from the salon, who opened his tiny, two-chair shop after years of collecting chairs and other barbering ephemera. Right now he doesn't offer a shave, for very basic reasons. "It's kind of tight in here, but I miss it," Janes tells me. "If I get a bigger location I'd be doing it. I have 97 square feet here - I can touch either wall. It's shame because I do enjoy it."

Unlike the salon experience, Janes says the barber shop offers the straightforward interaction men crave. "Men just want to have somebody listen to them. It doesn't take much - I just have patience and listen to what people want. If you just want a millimetre snipped off, I'll just snip off a millimetre. I think quick and to the point is what guys are looking for. Not a salon where you get tea and sit around for an hour and a half." 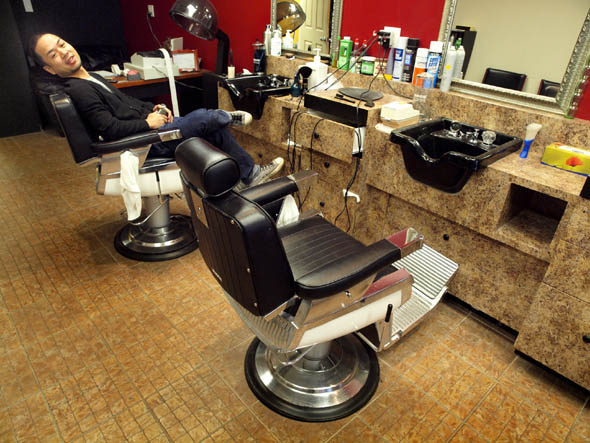 Like Blood & Bandages, Mike's Scissors at Bloor and Dovercourt is happy to follow in the workingman's haircutting tradition. During a Monday lull at Mike's, Beejay, 29, says that he's happy to put in his time running a chair, learning from a veteran like Mike Farzad. He says he looked at going to stylist's school, but decided that it wasn't a good fit - "I just wanted to deal with men."

For another thing, the stylist's schools here don't teach shaves anymore, and he'd have had to go a barber's school in the U.S. to learn. Working at Mike's has taught him a lot of things, much of it about how his customers deal with the haircutting ritual. "You have to gauge how they're feeling that day," he says. "Talk to them, remember their name, try to be prompt, don't make them late, talk or don't talk." Most of all, though, "you've got to be relaxed."

As older barbers start to retire, it's up to guys like Beejay and Roger to continue providing that brief, male sanctuary every month or so. "It's a great profession," Janes insists. "Make your own hours, just shoot the shit with people. It's a great thing to get into." 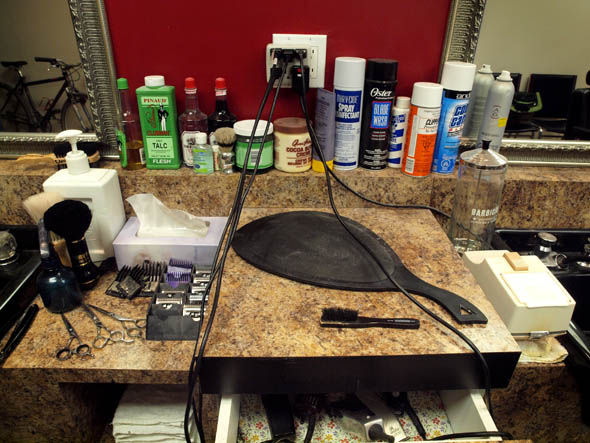