"He can't be serious about the Eurotrash thing," I said to Carolyn.

She had invited me to Gotstyle for the Ultra by Christopher Bates menswear launch party. Christopher is apparently really into the Eurotrash look; the logo is a trashcan with the Euro symbol on it. I was repulsed but intrigued. I had to see what this guy had to offer.

Christopher is from Vancouver. He started out in advertising then decided to pursue his dream of fashion design. His bio is impressive - he studied at Istituto Marangoni in Italy for fashion design and graduated with honours. The school boasts of graduates like Domenico Dolce of Dolce and Gabbana, Maurizio Pecoraro and Alessandra Facchinetti, ex-Valentino designers. 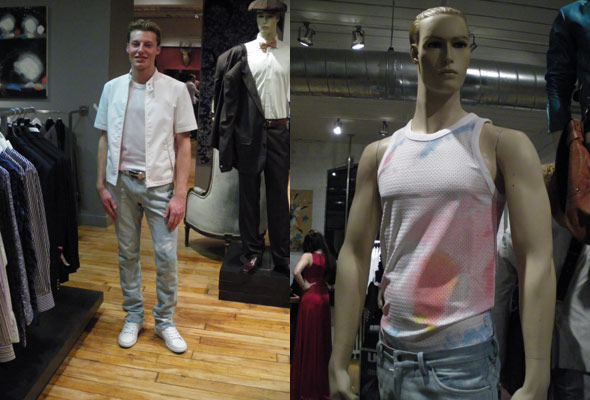 He came back to Vancouver to start his Ultra menswear label in 2007, but he also does couture and has dressed Miss World Canada Leah Ryerse and Miss Earth Canada Denise Garrido.

We walked into Gotstyle and it was business as usual; I didn't see anything incredibly garish lining the racks of clothing and after grabbing a beer, I was beginning to wonder where the collection was in the store.

Carolyn introduced me to Christopher and he took us and a little tour. He was eager to talk about the collection. It is a very European collection, but it manages to do that without some of the more heinous details you would see from Cavalli or D&G. The cut is slimmer than what is standard for North America, and the collection's fabrics were scrumptious: waxed treatments to linen and denim, linen with a metallic weave and nubuck leather in teal and black. He used prints effectively in that they weren't overpowering to the garment. Everything was so well-made and you could tell that production quality is important to this line. The collection features blazers, jackets, dress shirts, t-shirts, tank tops, trousers and belts.

Christopher is a details man. The "razor cuffs" are a very nice detail to jazz up the standard white button up. He used a pixelated pattern that totally appealed to the nerd in me. I'm a big fan of the teal leather jacket. I can only see the bravest of boys wearing the jacket and apparently so can Chris because it's available in your standard black. The light grey waxed linen trousers had me asking Christopher what his smallest size was. I thought it was great alternative to traditional linen washes and perfect for summer.

The landscape for Canadian men's fashion is dire in Canada. It's great to see designers like Christopher carve a niche for themselves in the market. I would have no problems if men dressed in Christopher's Eurotrash style, I actually would encourage it