How (Not) To Be Canada's Next Top Model

Over 500 young women between 18 and 23 years old attended an open casting call for Canada's Next Top Model at Fairview Mall last Friday.

Casting agent Elmer Olsen (pictured above) was on hand to meet potential candidates for season three of the popular TV show.

"I'm looking for the right body," said Olsen. "I can tell instantly if the body is right or wrong for us. Next thing I look at is the face. Is it photogenic? Then does she have the walk?"

Most model hopefuls lined up for over three hours to spend about three minutes with Olsen, who asked them a few brief questions, got them to show their walk and try to impress him with their charm.

Over 4,000 women across Canada have auditioned for their shot at fame and fortune. The casting tour began January 16 in Vancouver and hit shopping malls in Edmonton, Halifax and Montreal before Friday's stop in Toronto. I bet Fairview Mall hasn't seen such lineups since the opening of the Apple Store.

Ten women will be chosen to compete on TV for the title of Canada's Next Top Model. The winner will score a contract with Elmer Olsen Modelling Agency, a $100,000 beauty contract from Procter & Gamble and appear in a feature editorial spread in FASHION magazine. 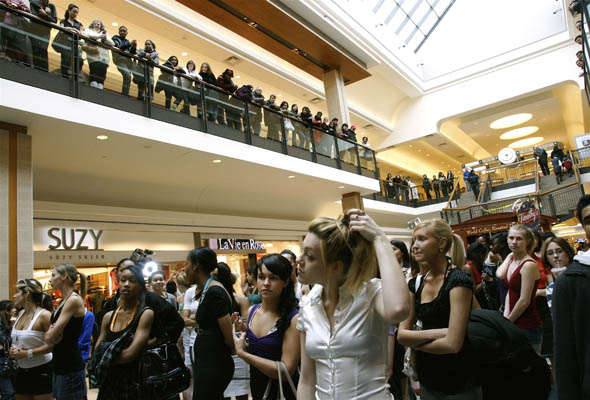 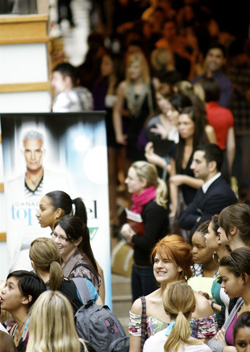 One model hopeful, Carolyn, 21, caught my eye in the crowd. At six-foot tall with red hair and a big smile, she stood out in the crowd (below, right).

She took the day off work to attend the open casting call. "All my friends kept harassing me to try out," said Carolyn, who works as a stylist at Fashion Crimes on Queen St. W.

"I used to watch America's Next Top Model, but there were too many girls being catty with each other. I'm here to show that you can be a happy, positive person, and that you can have tons of self-esteem without being a total bitch."

Shariff is in her fourth year of studying theatre production at York University. I asked her about her outfit, which she said is mostly vintage.

"This dress I paid eight dollars for at Value Village. My bag cost five dollars. And I got my shoes in London for twenty dollars.

"You don't need to spend a lot of money or wear designer clothes to be in fashion. It's about taking small elements and making them your own." 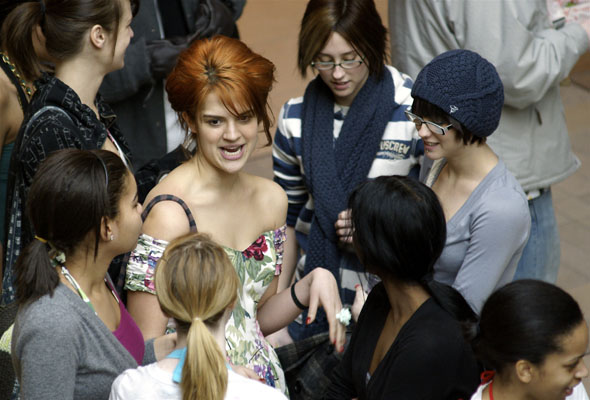 As I walked down the huge lineup of model hopefuls, I encountered Chelsea Muir, 20, from Ottawa (pictured below, left) and Deverell Reid, 22, from Toronto. While they never met before, they seemed instant friends after waiting in line together. I asked them about their outfits and why they want to be Canada's Next Top Model. 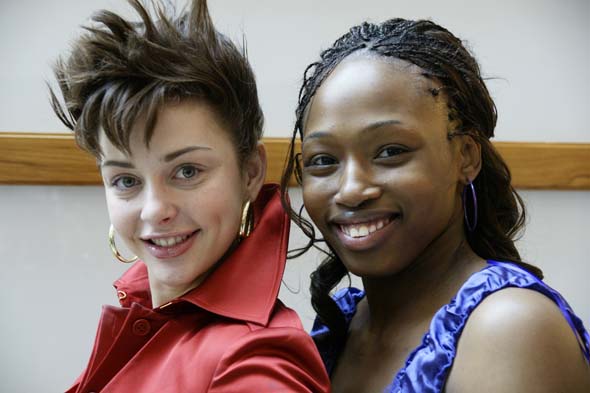 "I'm just trying this out," admitted Reid, a third-year nursing student at York University. "My mom is a fashion designer and both she and my sister were models."

Reid actually works at Fairview Mall, at the Footlocker store. Her purple top ($20) is from Urban Behaviour. She got her skirt (on sale for $10) from Costa Blanca. Her shoes ($25) from Payless. Her earrings ($5) are from Arden.

"My friend Diondra did my hair yesterday," said Reid. "It took six hours."

Muir's sense of style is much different from Reid. Or the vintage chic of Shariff. "It's been my dream for a while," said Muir, a hairstylist at Amalfi Spa in Ottawa. "You get to travel, have fun and be with different people. And I like being in the fashion world, trying different styles." 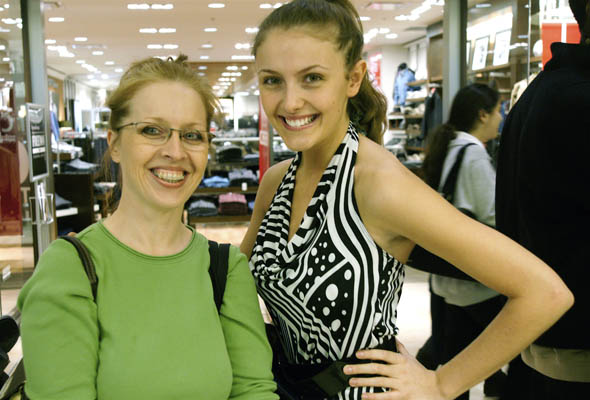 Further down the line I met Ashley Ross-Arsenault, 21, who made a four-hour drive from Sudbury with her mom Carla (pictured above) for the chance to launch a new career in the fashion industry. 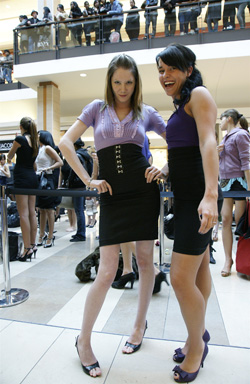 "This is my summer outfit," explained the young Miss Ross-Arsenault, who is in her third year of theatre studies in Laurentian University. "Living in Sudbury, most of my clothes are much warmer."

"I think she's perfect," enthused Mrs. Ross-Arsenault. "I hope they can see that."

Unfortunately for her, she didn't fit the "perfect" requirements for a woman, according to the show. At five-foot-seven-and-a-half (without her shoes) she came up half an inch too short.

A blonde Carlee Virolainen, 23 (pictured right) made the trek from Pickering, Ont. and faced a similar fate.

"I'm three centimeters too short, but I've got the walk and a big personality," she assured me. "And I can rock it in six-inch heels.

"It's not fair. Kate Moss is five-foot-six-and-a-half."

Joining her in the too-short department was Alexandra Hertz, 21 (right) who travelled to Toronto from Guelph, Ont. for this opportunity.

Knowing she was too short, she lined up for three-and-a-half hours anyway. "Cause now I can say I tried," said Hertz. 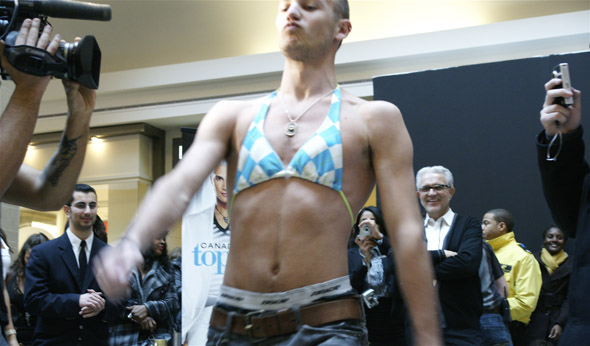 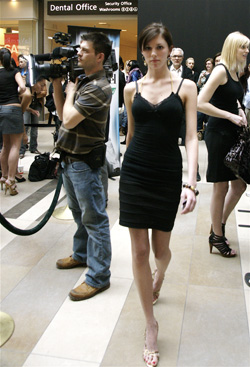 One guy tried to sneak into the auditions.

Celebrity blogger Zack Taylor, perhaps best known for his Hot or Not Gossip website, got the crowd's attention when he made a big splash on the makeshift runway (above).

But I doubt that even Olsen would deviate from his strict ideas of what makes a fashion model. Who makes up these rules anyway?

Although the open casting call started at 2 p.m., several young women, hoping to get a jump on the crowd, arrived much earlier.

By the time Olsen got to see them, they had been waiting 11 hours. Some were standing in their heels the entire time.

Others came in their Uggs or other winter footwear and changed just before their moment veritĂŠ. 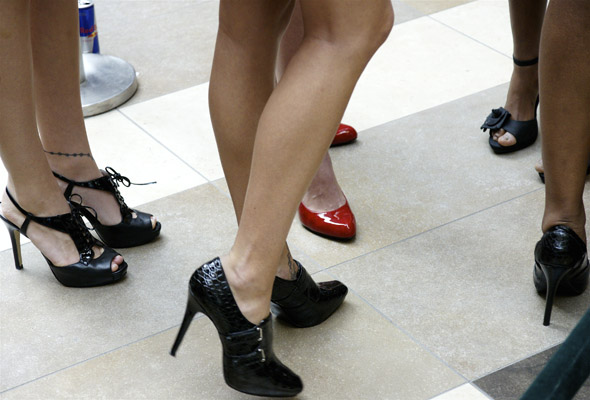 The long wait proved a bit much for one young woman. By 4 p.m. a group of sighs and gasps came from the crowd as one young woman collapsed and fainted in the excitement. 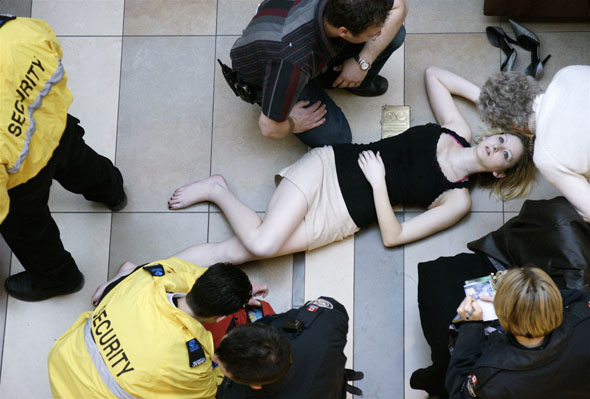 Mall security was quick on the scene to ensure her safety. Soon a police officer came by to make sure things were alright until the paramedics came to take her away on a stretcher for observation.

Her grandmother travelled with her all the way from the Woodstock-Ingersol area to try out for the show. Must have been a really long day for both of them. At least she made a good floor model.

Here's a photo slideshow with more images taken at the audition at Fairview Mall: