And so we come to the end. Friday was the last day of runway shows during L'Oreal Fashion Week's spring/summer 2009 collections. I donned a vintage full teal-fossil-printed Louis Feraud skirt; my trusty silver ballet flats; a gold lion necklace; and a wide-sleeved black shirt, and off I went to see the Melinda-Mae Harlingten, Lucian Matis, Afshin Feiz, and Denis Gagnon shows.

The night started off with many a yawn at the Melinda-Mae Harlingten show. Granted, she designs more casualwear, but the collection was still pretty underwhelming. 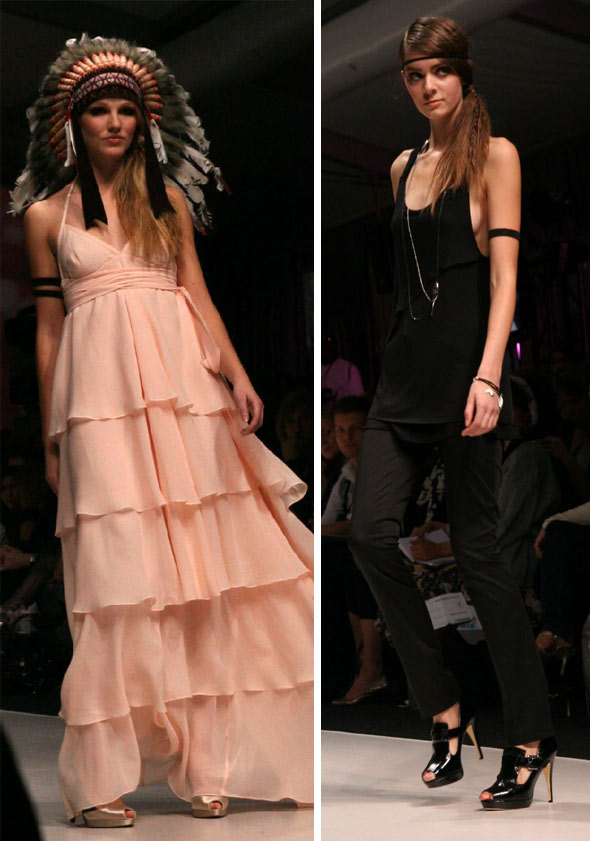 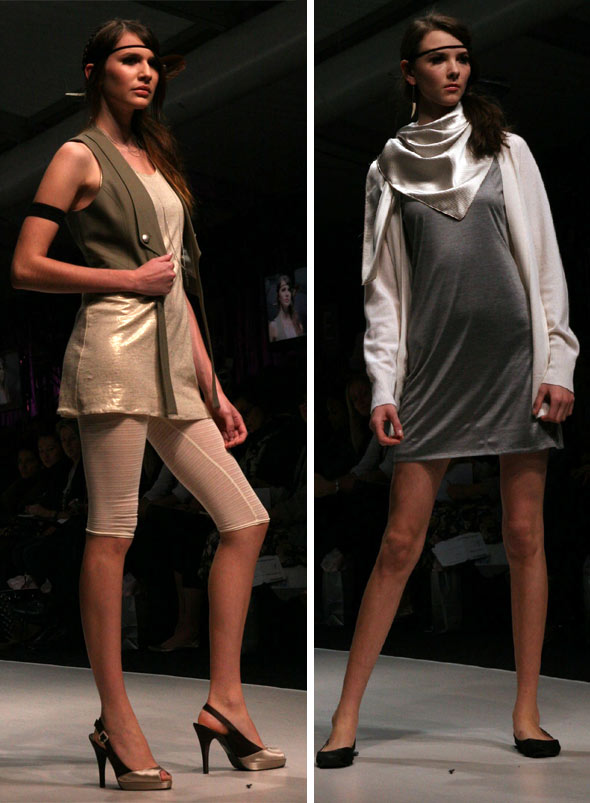 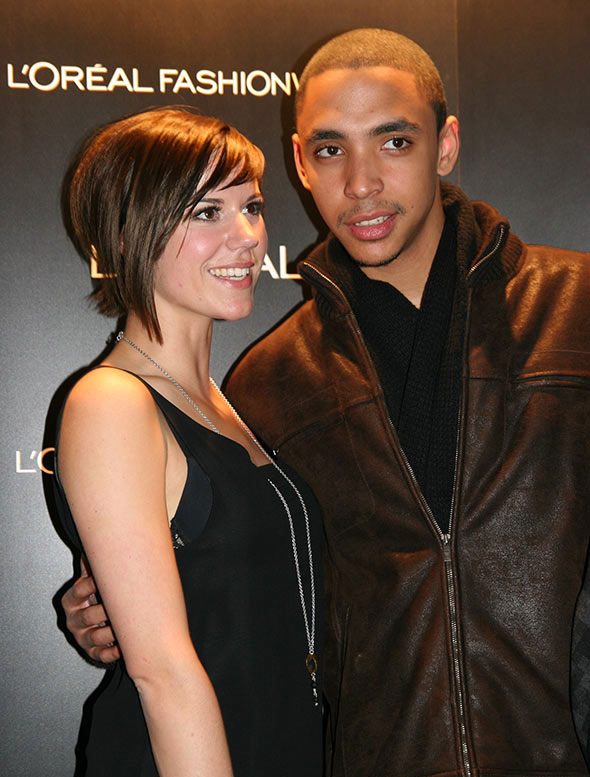 From olive boyfriend blazers and tweed shorts to patterned tees and khaki jackets, the clothes, for the most part, didn't rise above what you might luck into at H&M. (And some pieces were even worse, such as a black-Spandex-bodiced floor-length gown with a flowing skirt in a different shade of black, or a tiered sage babydoll dress.)

There were a few pieces that managed to transcend the line's ordinariness, such as a shiny, nipped-in one-button blazer; a pale pink v-shaped top; a dead-sexy long white cardigan that buttons up half-way; a wispy thin-knit cardigan in a paisley-like pattern; and an open-front drop-waisted lilac silk dress.

Promise, sure, but promise does not a good collection make this time. 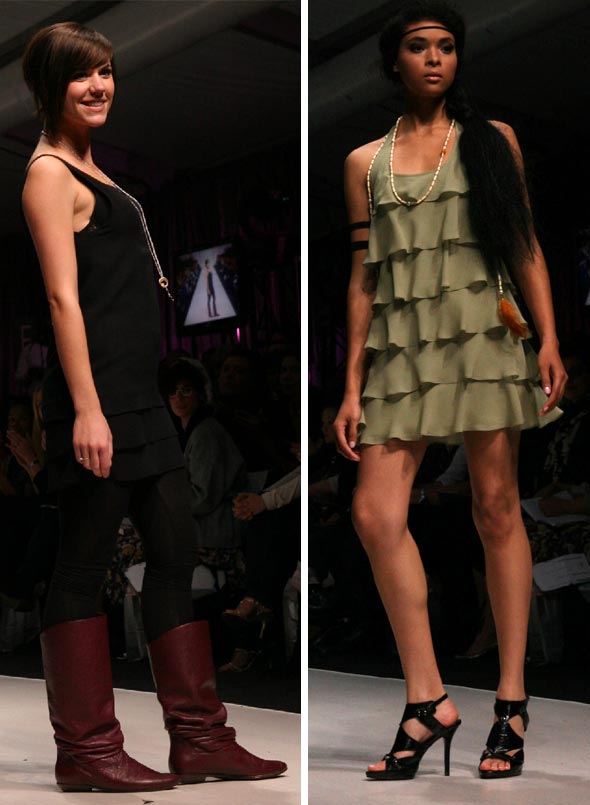 The Project Runway Canada runner-up is another current Canadian fashion darling, and his spring/summer collection kept the fever alive around the foxy young man. Lucian Matis' show - which, refreshingly, opened with no opening montage, ads, or pretentious voiceover - was clearly one of the week's favourites, with spontaneous applause throughout and a modest standing ovation at the end. 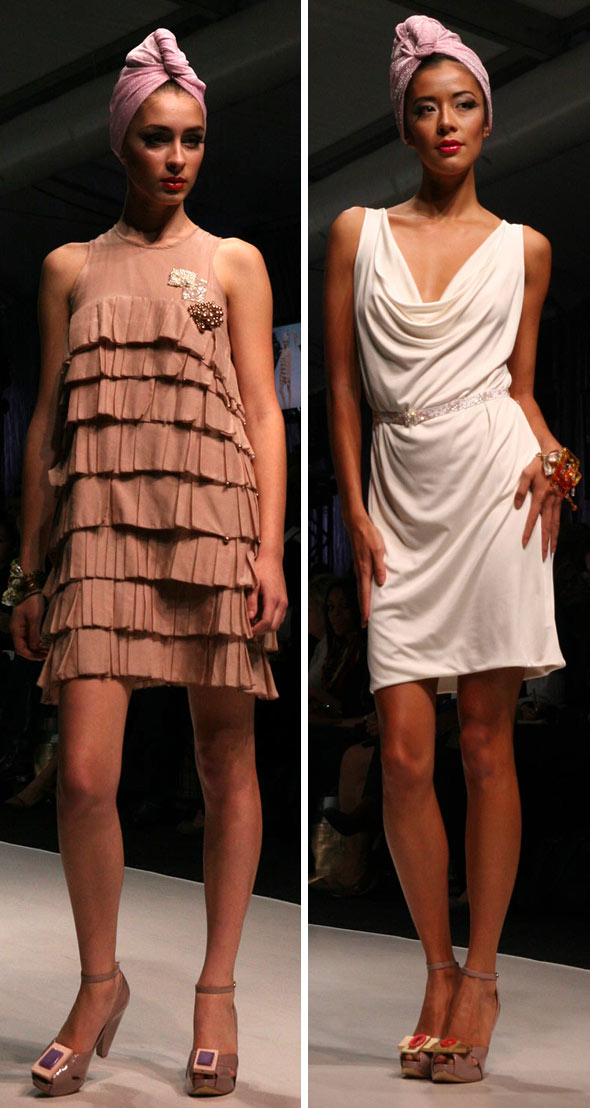 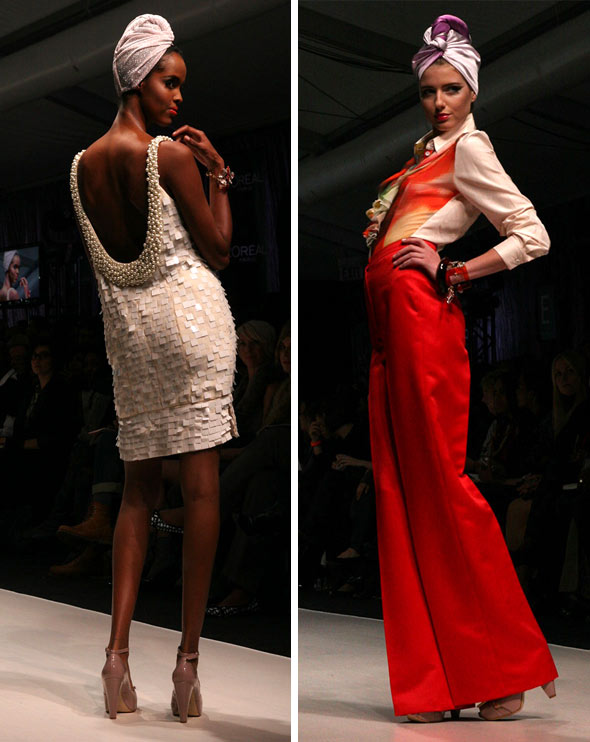 Matis' gowns touched back on the recent trend of pixellated, space-age florals, with plenty of blowsy, blown-up flowers, either super-sized or run through the computer. This gave the uber-feminine collection some nice edge.

The gowns often felt like the sort of clothing ladies who will later lunch might wear before they later graduate to Thien LE's voluminous silks. There were some sexy separates--like a lemon-yellow blouse with a collar lined in matching pearls, high-waisted silk pants in cherry-red, and a thin-knit tank in the palest pink--but where Matis shines is in his luxurious dresses and gowns.

(The weakest points were when he went more casual, like a loose-fitting red shirt splashed with a cartoon face, or a cheap-looking stretchy pink skirt. Fancy is Matis' forte.)

The shorter pieces included a close-up flower print on the white silk bubble-hemmed frock, an A-line party dress flapping in pink and white sparkly squares, and a tight silk number adorned with sparkly squares, one bejeweled shoulder, and a big ruffled bottom (it looks more subtle than it sounds!).

Representing for the longer gowns were tight-bodiced, floral-fantastic goddess dresses with long, flowing skirts (there's that Grecian trend again). It's a lot of elegance from such a young designer, but those at Fashion Week were clearly glad to have it.

The press crammed themselves into the teeny-tiny Studio space for Afshin Feiz's by-invite-only show. The air of exclusivity was matched by the high couture feel of his collection, which was populated by exquisite elegance, ethereal fairy dresses, and designs to die for. 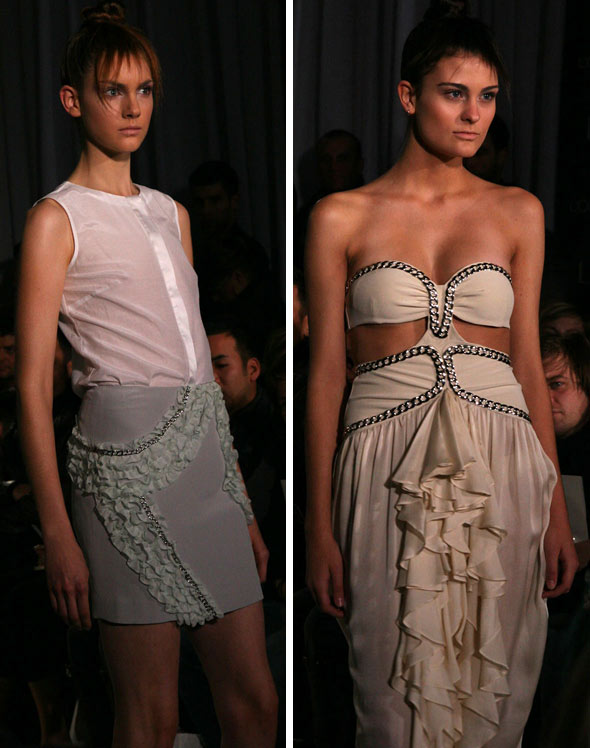 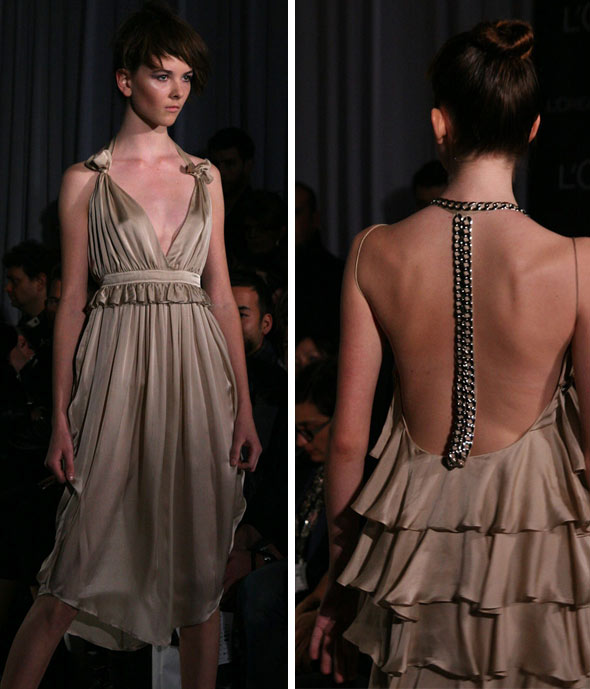 The collection was very much of a piece: there were only a few items--a jumpsuit or a pair of shorts here, a boyfriend blazer or mini-skirt there--that strayed from the staple fabric and motif of the show. Pretty much everything else was a study in three things: small ruffles, pastels, and...chains.

The contrast between the delicate, pale silk ruffles of ice-blue, pistachio-green, and butter-yellow and the chains snaking all over the clothes was quite stunning. And it wasn't too obvious, either--it was just the right amount of surprise without being too outlandish.

The chain appeared in many places, from a t-strap down the back of a formal gown to criss-crossed suspenders on a pair of pants. They even wiggled around cut-outs on the back of dresses.

And what dresses! There were giant skirts of mint-green ruffles that cascaded down from the waist of a gown, and then there were ruffles that formed the bodice of an empire-waisted dress that streamed out behind the model in wafts of silk. They were the dresses that dreams are made of. 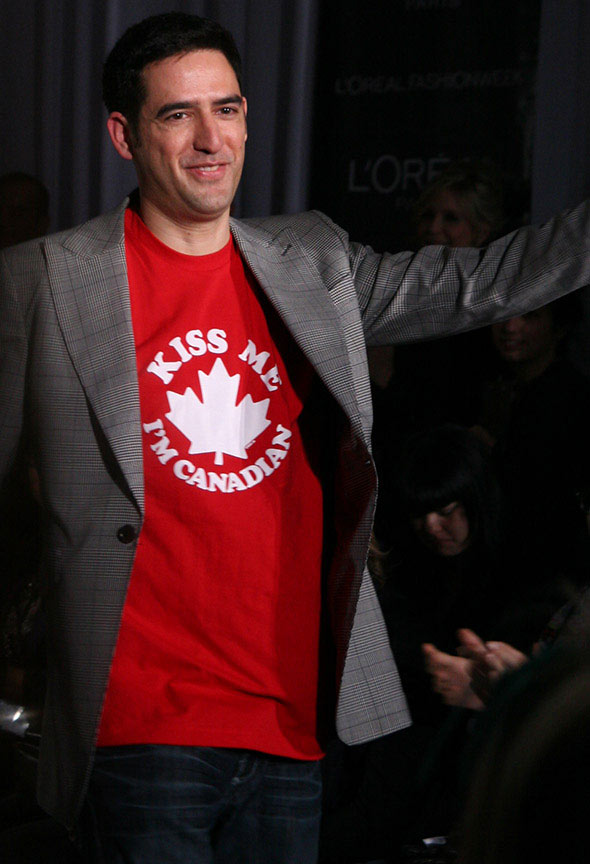 In a nod to his international clientele and overseas HQ, Feiz took his bow in a shirt that proudly proclaimed, "Kiss me--I'm Canadian." And after seeing this collection, I definitely wanted to pucker up.

Comeback kid Denis Gagnon stomped out a dead-serious, dead-sexy collection that hearkened a little to the darker visions emerging from the now-hot London fashion scene. Unlike the frothier style of all three designers earlier that night, Gagnon had something more meaty in mind.

He started off with several leather pieces, including a skinny jacket with ruched arms and dainty bow at the neck, and a thick-braided hood joined to a ruched, long-sleeved mini-dress. Even the styling was aggressive: the models donned thick, spiked, black and blood-red rubber jewelry, carried sturdy leather bags, and managed sky-high blood-red patent platform wedges. 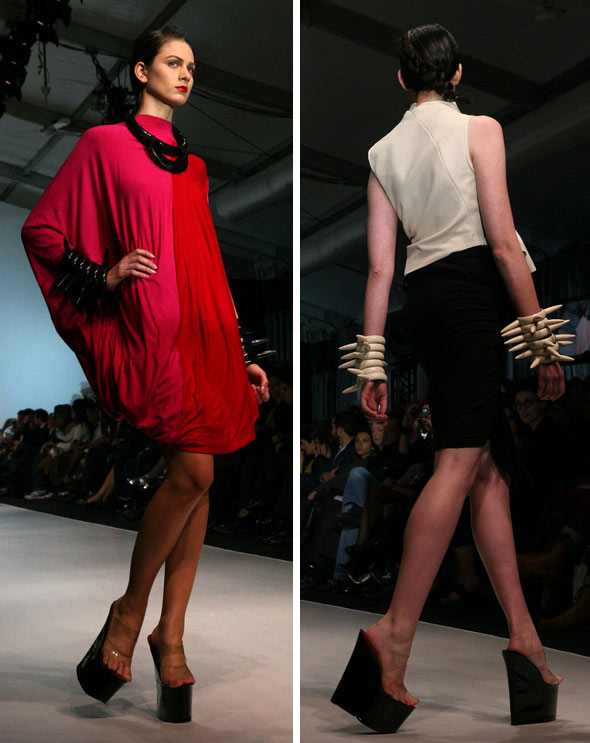 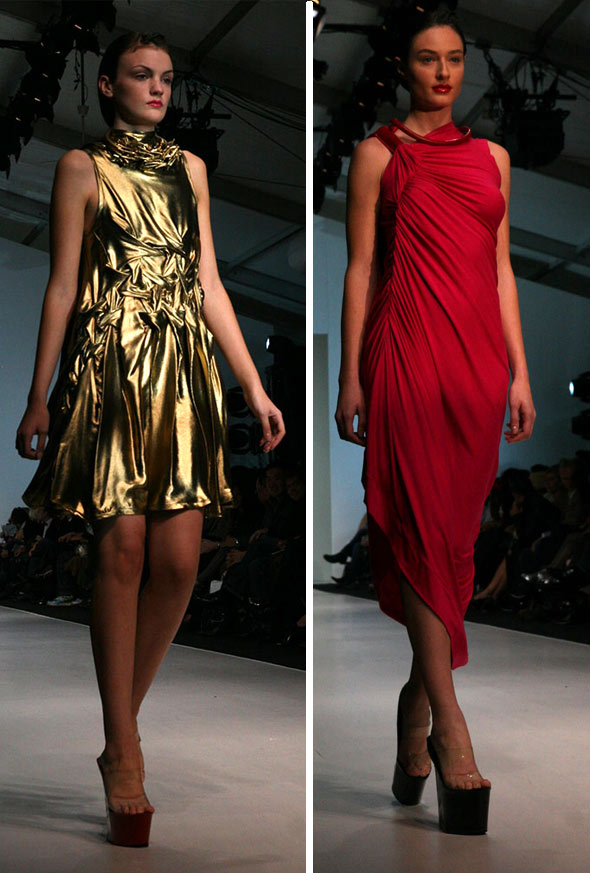 From there, however, he took a sharp turn into soft jersey, while still retaining the fat braids and the extreme draping and pulling (and the agro accessories). This collection has Denis' hands all over it--literally. You can see where he's manipulated and braided the fabric, ruching and twisting it this way and that, and draping it in the back, the front, and sides. The whole thing was a punk love-letter to handmade clothing.

Yes, the collection was on-trend in terms of the Grecian influence, but it was one of the few collections this week that took the trend and did something individual and memorable, courtesy of the thickness of the braids and the extremeness of the draping. The statement colours of red, hot pink, and black also fit well with the bold lines of the collection (and was a nice change from the usual Grecian pastels), even if the final few flimsy pieces in gold lame were more cheesy than charged.

Examples of the collection's power-pieces included a dress that had its top tethered to the bottom of the dress via four thick braids attached to either side of the shoulders, and a tight skirt with a giant knot at its front topped with a sharp, shiny, asymmetrical cream-coloured mini-blazer.

Then there was the dress that twisted up the middle and to the side into a demure little turtleneck, and the super-draped sack-dress revealing two panels of flesh via a shiny black bar cinching one point of the dress's back together.

It was a great way to end my first Fashion Week--out with bang, not a whimper.