I broke an unspoken rule I had with myself - I don't do fashion shows related to undergarments.

Most shows end up being hosted in a club, where I can view the best in Playboy underwear, with models on risers (and way too much to be seen). This is great if you are a guy or a lesbian, but I'm usually just interested in the clothes when it comes down to it. The models are just hangers and I don't want to be distracted by their crotches. Note: Ginch Gonch is an exception, because, well, there are hot men in their shows. 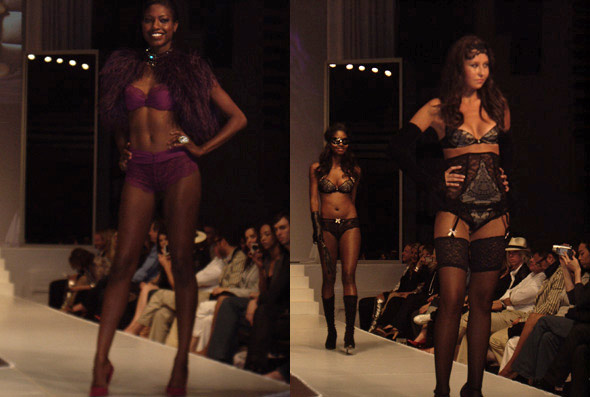 I received an invitation to The Art of Seduction - a presentation of the Fall/Winter 2008 collections of the top 11 French lingerie brands. It took me a long time to decide if I was going to go but that changed when I was rummaging through my underwear drawer and picked out this lovely light blue lace bra and panty set to wear. They were French, and happened to be one of the eleven designers featured. My mind was made up. 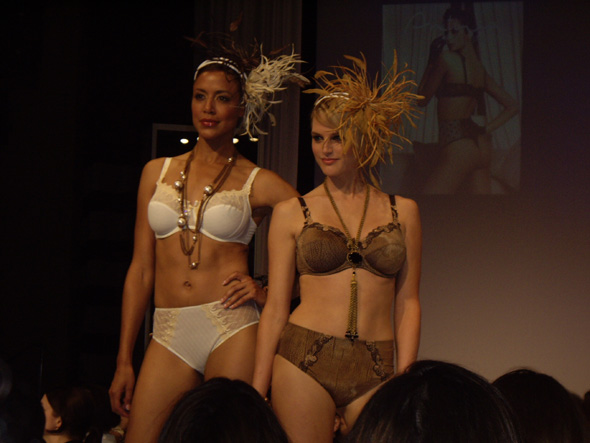 The night was hosted by Glen Baxter of Fashion Television. The audience was comprised of members of the Toronto FC, actors, models and many fixtures of the Toronto fashion community. I was curious to see where the runway would be in The Carlu, since the venue isn't conducive to fashion shows. When they opened the runway room I was happy to see that they made great use of the space. The runway was a U shape extending from the stage. Seats were placed on the inside of the U and on the outside. The runway was perfectly elevated. There was plenty of room and the standing-room only guests got a great view too. 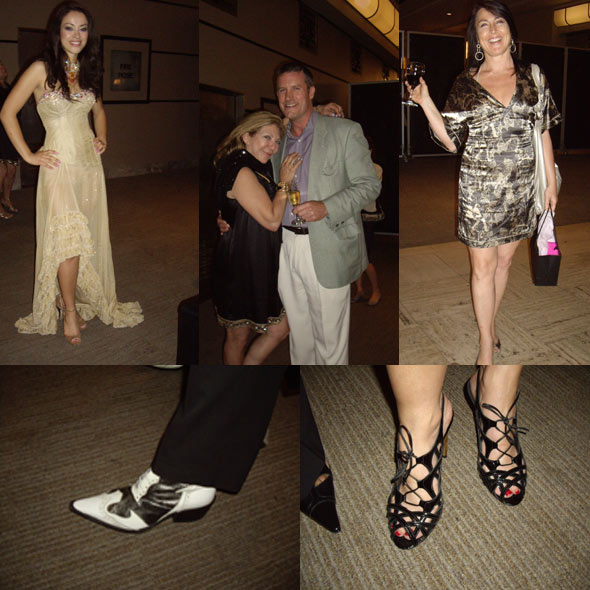 Mississauga native, Cindy Gomez (top left in image) sang for the audience before the show. She is a wiz kid who can speak fluent French and Spanish and can sing in Italian, Latin, Chinese (Mandarin and Cantonese) and Hindi. She sang a very popular French song, which I don't know the name of. I was convinced that it was a Parisian singer they brought with them. I had no idea she was local. She was also wearing a beautiful dress by Toronto's own Lucian Matis. 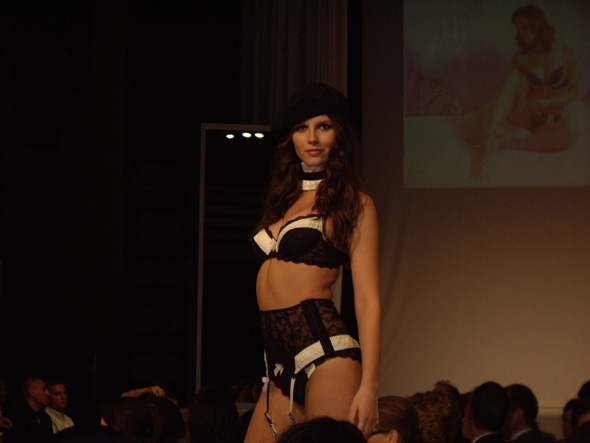 The parade of models started and each brand presented five looks. None were trashy in any way shape or form. It was a vision of lace, corsets, garter belts and g-strings of all styles. I swooned. As predicted, black and red were the dominate colours but splashes of colour turned up in the accessories to complement. Amazingly everything looked really comfortable. I didn't see any underwear riding up places it wasn't suppose to. French Lingerie is sensual, classic, beautiful and most important in my books, functional. 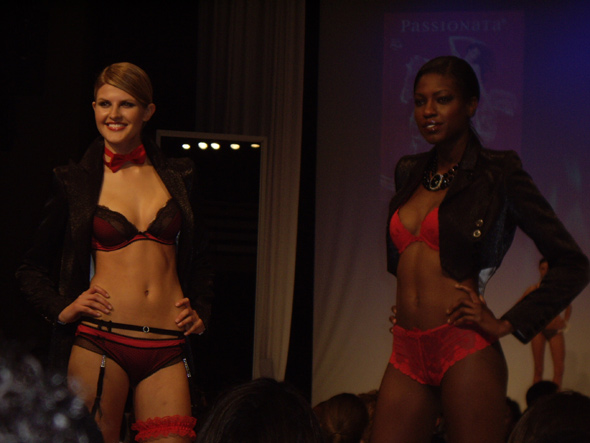 A report on a lingerie show wouldn't be complete without commentary on the models. The casting was great. They had figures that look great in lingerie, which isn't what you would see at fashion week. These were women, not teenagers pretending, and you could see it in the models. They were a brave, confident bunch. 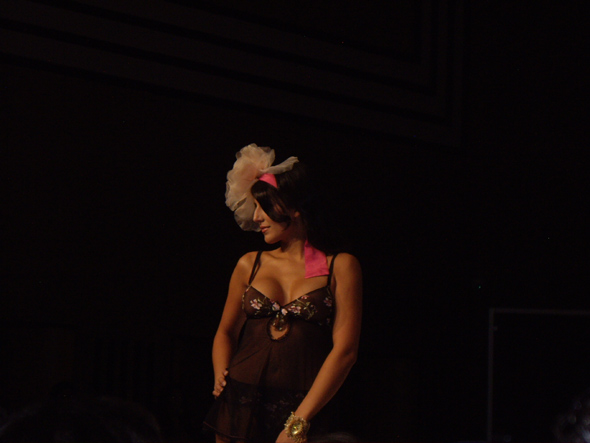 There were a lot of men in the audience (can you really couldn't blame them?). It was funny to hear about how the FC guys were using hand signals to communicate their favourites to friends on the outside of the U. Glen Baxter reminded all the men at the end of the show that he was backstage, reaping the perks of being the host. 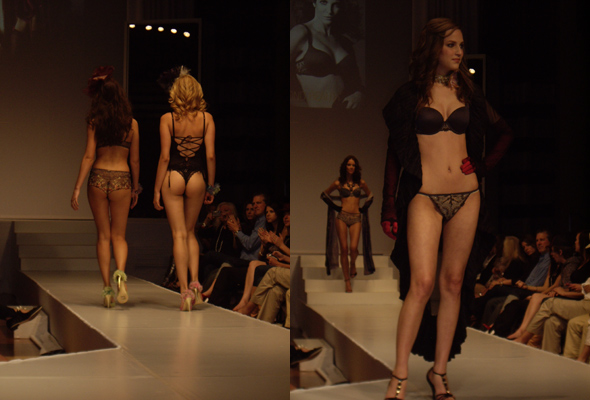 The brands featured were Simone Perele, Barbara, Lise Charmel, Chantelle, Passionata, Elixir, Lejaby, Princesse tam tam, Rosy, Aubade and Antinea Lise Charmel. There was something for every size and some companies are dedicated to the larger busted ladies. All these brands have Canadian distribution and I've seen many available at Secrets from your Sister, Holt Renfrew, Tryst. 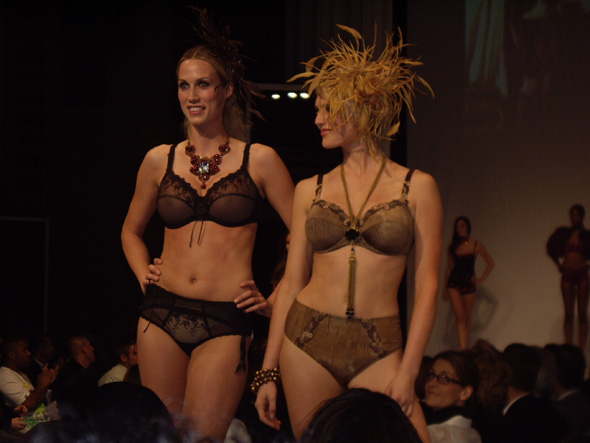 It wasn't just about the French that night though. Toronto designers Indiva, Izzy Camilleri, Lucian Matis, Pat Mc Donagh and Saniya Khan provided pieces to complemented the show. On the accessories side, Designs by Naomi, Lilliput Hats, Jewellery By Karen and Monikque Costume Jewellery provided the great jewellery that held its own with the lingerie. 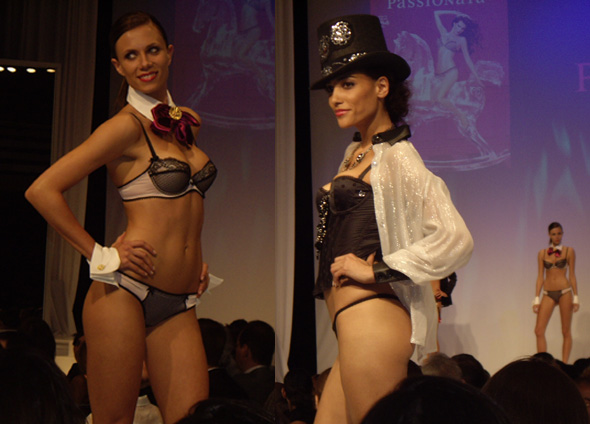 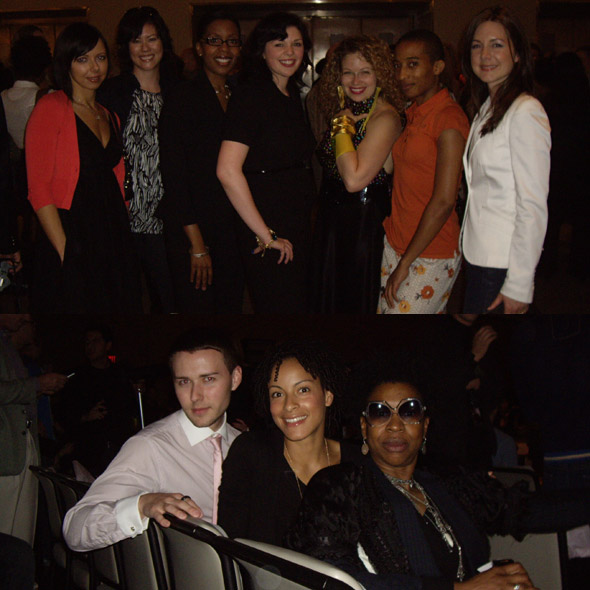 See more image from the show at my flickr page.