Taking the Fashion Battle to the Streets

Street Clash is a street style blog that takes the genre to a new level. On this site, cities around the world battle it out, tournament style, in order to be crowned the king of street style in the world.

The site was started in July 2007 by Toronto resident, Darryl Natale. He took 38 street style bloggers and put them up against one another. Blog readers voted on the city they felt had the best street style. The winning cities moved on to the next rounds until the final winner was chosen. Tel Aviv was crowned the champion in the first Street Clash competition. 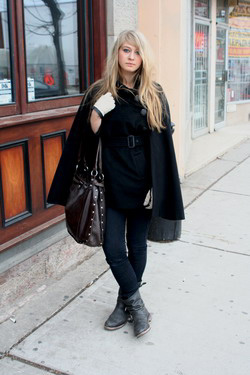 Toronto placed horribly. I was really disappointed. I didn't think we could take on places like Copenhagen, Paris or London, but to lose to Washington in the first round is pretty embarrassing. Hopefully, Torontonians will be stepping it up in 2008.

I'm not into street style blogs personally and the only one I read is Toronto Street Fashion (shameless plug). I did take notice of this site and it was refreshing to see someone change up the modus operandi. I was already over the street style blog craze.

Darryl has huge plans for the site in 2008 which includes moving off of blogspot.com and adding a lot more interactive features for readers. He is on the hunt for great street style right now in the city. So, dress to impress people and make me proud in the 2008 Street Clash competition.

If you run a local street style blog, please comment with your url!