I rarely need an excuse to dress up, but it's a lot easier when I have one. As luck would have it, I got my wish. This past weekend a small group of Toronto fashion scenesters got together to model in the ad campaign for this year's Buy Design for Windfall, a fundraiser for the Windfall Clothing Service. Started in 1991, Windfall is Canada's only clothing bank which distributes only new clothing and other basic needs to social service agencies in Toronto. Windfall has a strict policy when it comes to agencies it deals with and ensures that the items they provide get to the people who are living in poverty or crisis. Donated items come from participating retailers and manufactures. Buy Design is their yearly fundraising event.

I wore a dress from Juma's first collection to channel Studio 54. Andrew punched up the outfit with a vintage fur stole and combined with my McQueen pumps I was ready for my close-up. The Holt's girls were both wearing stunning fall 2008 dresses from Greta Constantine. Adrian looked like a young Bob Dylan with his black velvet jacket, crisp white shirt, black bow tie and wayfarer sunglasses. There were lots of sparkly metallic outfits in the group. I loved the way Danielle draped her grandmother's dress which resulted in a very modern silhouette. 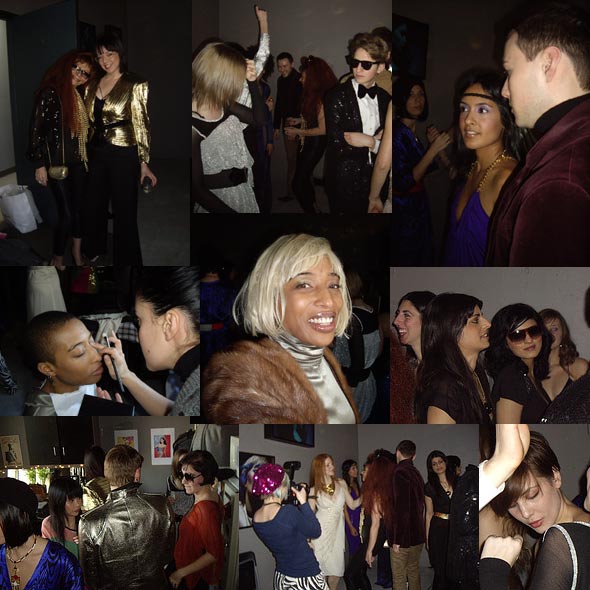 We spent a few hours air kissing, dancing and posing for the camera. Acting silly for a good cause is always a lot of fun. A few glasses of Prosecco later, I was talked into trying on a blonde wig. I find it slightly disturbing that the blonde bob suited me. Blonde really changes my appearance and I discovered that it renders me unrecognizable to my friends. I was Eris on Halloween and everyone I knew gave me dirty looks when I went to talk to them.

The final shots will be posted on the Buy Design for Windfall website in February when it opens officially. The Studio 54 themed fundraiser is on April 26, 2008 in The Distillery District.