"Are you going to Ginch Gonch?"

This was the first thing my friend asked me over brunch at Flo's. I hadn't even looked at the menu, let alone the Fashion Week schedule. "Who the hell are they?" I replied

"Male models in underwear!? You bet your ass I'm going."

And I was happy I did. Aside from the bare manflesh, underoos from the 80s and tighty-whities inspired Ginch Gonch's style. The spring 2008 collection, Jungle Fever, featured five themes that used colourful prints. Erect Eagle, Tickling Tiger and Panther Play all featured large prints of their namesakes. Monkey Business had cute cartoon of "See no Evil, Hear no evil, speak no evil" monkeys repeated. Totems were very Canadian with their native owl, eagle and bear images. 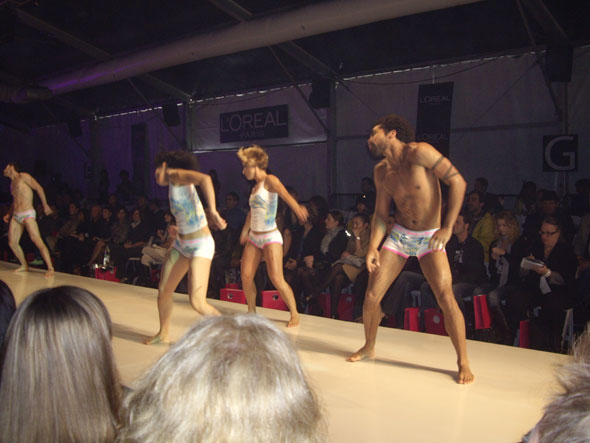 The show started with a troupe of dancers in Ginch Gonch. This was the was the first time I'd seen dance incorporated into a runway show. The choreography made good use of the runway. The dancers left and the models came out, wearing clothing from the Erect Eagle theme. Once finished the dancers came back and performed. The models returned in the next theme. This continued until all the themes were exhausted. I felt the show was too long and could have used some editing. Yes, I did enjoy the hard bodies and I can't believe that I'm actually griping about the length. I was sitting besides Rolyn Chambers (Fab, Dance Camp, Circa) and he had me in stitches the whole show.

I managed to get my hands on a couple Totem bikinis at the after party. I'm impressed at how comfortable they are despite being extremely row rise. They are well constructed and don't ride up when you walk. Major bonus points. 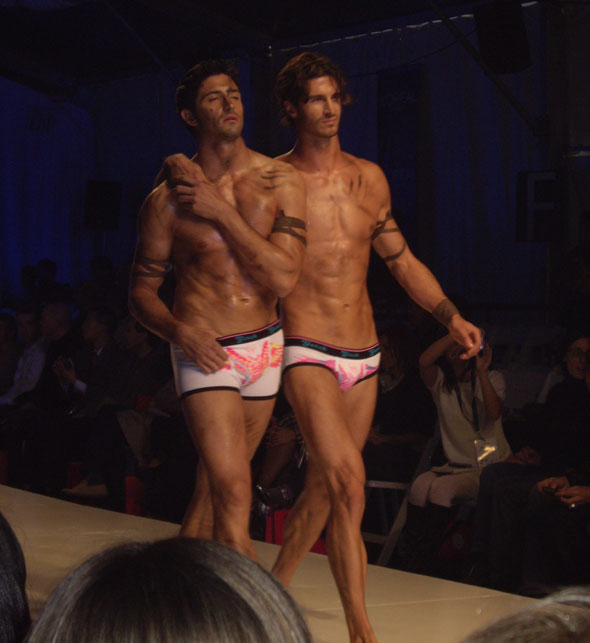 Edit: Thanks for the spelling correction David