Throngs of women, young and old, chasing the latest fashions -- and their youth -- lined up as early as 8:30 this morning at Yonge and Dundas for the opening of the new Forever 21 retail store.

By 10am opening time, over 60 people are in line. I chat with a bunch of young women already waiting over an hour in anticipation of the opening.

"I'm in my 30s, but I'd rather look like I'm in my 20s," says Eleanor Micallef, 31. Along with her friends Yo and Ange, they made the trip all the way from Brampton to get the forever 21 experience. 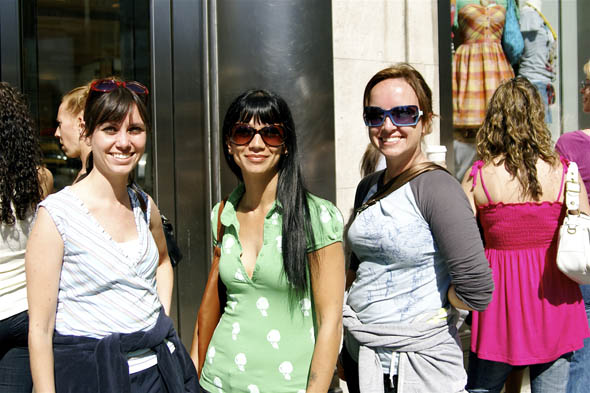 Even those younger than 21 already wish to be forever 21. Nicole, 17, was at the very front with her mom because she wants "to get the best of everything first." Why does she want to be forever 21? "More freedom.... And independence." I guess shopping has its privileges.

Nicole's mom Sarah says she's been to a Forever 21 store in Chicago, but it's a smaller store than the Toronto one. "I like the store because the prices are good and they've got up-to-date fashions."

Just then the doors open and customers pour into the store to the sounds of "Take Control" by Amerie. Lineups soon start forming at the change rooms. The accessories shelves are among the most popular areas, but leave many a young lady confused for the lack of nearby mirrors. 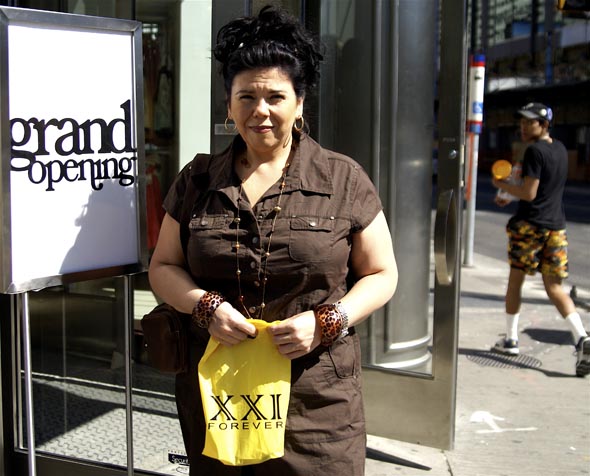 Adele Castanedo, 38, is the first through the cashier with two bracelets that total $18.66. "We were nearby and my husband went to get a coffee nearby and I just strolled in. At first I thought it was The Gap."

The Gap was the previous tenant at this prime location, now home to the second Forever 21 store in Canada, after Edmonton. The chain already has over 300 stores in the US with 70 planned for Canada. 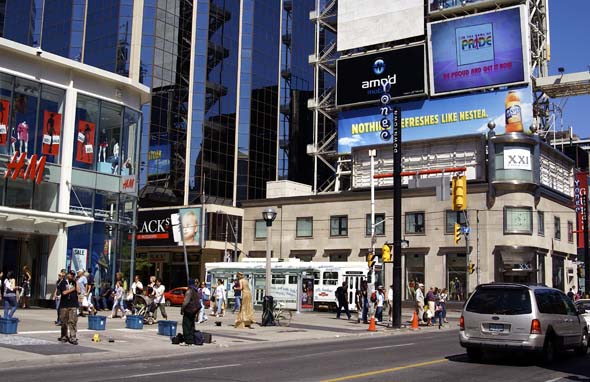 "Our aim is to be very hip and now and very fashionable," says store manager Jeremy Cookson. "It's a mindset. Everybody wants to be 21."

Including me. But for now, only the ladies get to be forever 21. There's no men's section in the Toronto store.

But all hope is not lost. "We're launching a men's line in August," says Cookson. "Just in time for the back-to-school season." Now I'm especially glad to be going back to school in September. 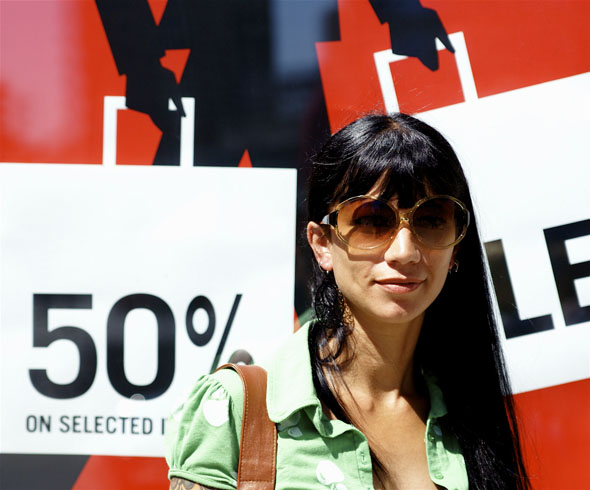 After an hour of shopping I catch up with Micallef, who emerges with a new pair of black earrings and olive sunglasses, but is a little disappointed. "The Forever 21 store at the Walden Galleria in Buffalo is bigger and has better deals and selection. People in the US are way bigger, so there's a lot more smaller sizes still available."

Upon exiting Forever 21 Micallef and her two friends cross Dundas Street to shop at the H&M, where they're having a 50% off sale.