Pushing the limits of shoe design

The winners of the Bata Shoe Museum International Shoe Design Competition were announced on April 13, 2007. I was a bad museum member and didn't read the April newsletter so I missed out on this information. The shoes were also on exhibit at the museum during the month of April but have since been returned to their respective owners. All is not lost; you can view the winners online.

The competition was organized with the help of Ryerson University, School of Fashion and the International Foundation of Fashion Technology Institutes. Post secondary students from four continents submitted designs that pushed one of three design elements to the extreme; function, elegance and provocation.

The first prize went to Nadia de Nobrega of De Montfort University in the U.K. That design is pictured above and was inspired by origami. 2nd place winner was Haruka Kikuta of Bunka Fashion College in Japan who chose to interpret a functional design element and make a shoe for space travel. This shoe is still under development; however the design specs were enough for it to take 2nd place. Anne Celeste Blackman of TAFE in Australia used pearl pins to explore the idea of inner pain. The designs will be online till at least September 30, 2007. 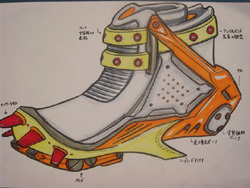 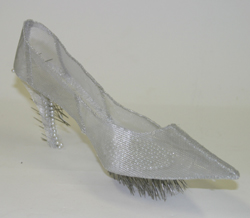