My Toronto Week of Style roundup

The Toronto Week of Style entered without fanfare and left the same way. I attended two of the events, Bambumoda and Fashion Fringe. I wasn't interested in watching Lust & Seduction, a swimwear and lingerie show. Sparkle! was the Saturday night finale at The Docks. The venue totally turned me off attending; it's a complete pain in the ass to get to. As I said to friends, "I don't do The Docks. Only three people could get me there, Trent Renzor, Bjork and Tori Amos."

Bambumoda was held in the stunning Arcadian Court. The venue took my breath away with its super high ceilings and Art Deco decor. The rectangular room was perfect for a runway show. There were a lot of chairs set up in the space. In fact, too many. From the amount of people I saw waiting to get in there was going to be a lot of empty seats.

At the media launch, bloggers stressed the importance of starting on time. Of course this rule wasn't executed correctly. The show was 45 minutes late. The bloggers in the front row started taking bets on the start time. Gail won with a time of 8:36pm. Thank God it wasn't 9.

The long runway had one great feature; there was a break in the centre which didn't have any chairs. Instead the photographers set up shop and the models would stop and pose for them and then continue down the runway. This made my picture taking experience a lot easier from my vantage point.

Bambumoda featured designs from Mehanz, Obey, Artful Dodger, Lifetime and Mooks. Except for Mehanz all the other collections were streetwear. It's hard for me to get excited about a streetwear fashion show. That isn't to say streetwear isn't exciting but it really needs to be seen in its natural habitat and that's on the street. It needs an individual's touch and not a stylist one. 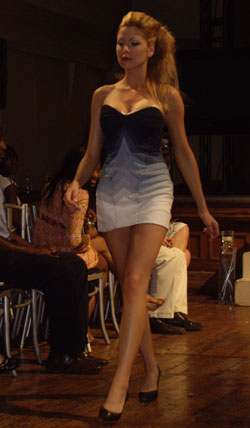 The Fashion Fringe show was a little disappointing. It was late of course, this time half and hour. It was much too short and the complete opposite of Bambumoda which probably could have used some editing. There were four designers competing and they only showed 3 complete looks. 12 looks does not make a fashion show. I wish I could tell you the designers' names but I was unable to hear them when called by the MC. I do know Irene Stickney was one and only because I know her personally. After the show, we were asked to leave the building and wait outside for the Art of Denim to start. Not wanting to hang outside on the street at Queen and Sherborne, (especially because Danielle and I were asked if we saw anything going down by the cops before we entered the place) the bloggers decided to part ways and head home. The Berkeley Church has a basement, why didn't they let us wait there?

This was the first attempt at the Toronto Week of Style and I do have to applaud the team for putting it together. Organizing events like this is never easy. I do have some points that they might consider for next time.

1. Get a professional MC. It was very hard to hear the designers name when called and isn't really about them
2. A line sheet and quick bio of the designer works wonders. A fashion show attendee should walk away from the event with something that provides them information on the designers they just saw
3. Ditch the stupid guest list. Maybe 4 or 5 years from now it will be needed, but not right now. People shouldn't get harassed because they are not on the list. You want people to attend right?
4. Commit to the dates you set for yourself. The press site was supposed to be updated with information regarding the designers on May 15, 2007. This didn't happen which makes it difficult for me to let people know about the event when I don't even know what to expect
5. If possible make the event space and the after party space the same. People will most likely stay for the after party if they don't have to go anywhere
6. Advertise. There should have been flyers blanketing the city but I didn't see any. You need to get the word out if you want to attract a large audience.