Between shows, most media types make a beeline back to our sanctuary, the media room. Some people are looking to get at the computers and fax machines; others are just looking for a meal. I'm part of the latter group, but I also use the media room to reconnect with friends and make new ones. This year, there were no little fruit tarts and I was more than disappointed. The coffee tasted a lot better.

Mackage was a BIO (by invite only) show. I contacted their PR people to get on the list and they were nice enough to add me. I'm the proud owner of an Anita Mackage Jacket in black. Yes, they named a coat after little old me. No, actually, they didn't, but it's nice to dream. I'm an egomaniac and this jacket had to become part of my collection. The fact that it was military inspired was total icing on the cake. Mackage is a Quebec company gone international with additional headquarters in Paris and Osaka and sales agents across Asia, North America and Europe. 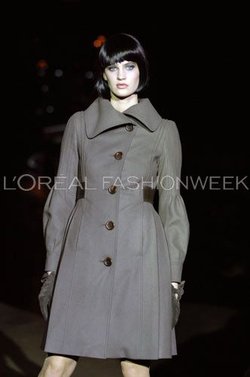 I love the Mackage silhouette, long and lean. The colour palette brought no surprises and consisted of black, brown, crĂ¨me and grey. I wanted every Âž-length jacket with princess sleeves. Put a bell sleeve on a jacket and I'm a fan for life. They even sent a cape with a leather belt down the runway. I didn't like it as it didn't drape or move the way a good cape should. The knitwear was 50/50 with me. I don't like the style of jumper that was shown. The chunky sweaters and dresses were much more to my liking.

I loved the styling for the show. If I were a white girl, I would definitely rock the black bob with bangs hairstyle, it's badass. All the models wore identical wigs with smokey eye makeup. The music was dancey and aggressive which worked for this urban collection.

After all that good stuff, I have only one not so nice thing to say. I thought the show could have used an editor to tailor the looks down and make the show a little more focused. Some of the jackets were very similar in style and colour after awhile everything blended. I think I saw the same style jacket several times in different colours.

Final Pass of the Models

You can view pictures from the show at my flickr page, the official site and Wire Images.