I'm doing my best to get to the Liberty Grand to see Andrew Majtenyi's show. His PR rep, Melisa, invited me and it would be horrible if I missed it. But fashion is always late and I made it on time.

I had the pleasure of joining Andrew Sartone from Now Magazine in the front row and was excited to see what kind of photos and video I'd get from this vantage point. (I was going into the show completely blind; having left all the press material at home.)

The show started with a short film. I groaned aloud.

At Feral Childe in January, I had a horrible experience with a pre-show film. Unlike that movie, this one didn't make me ill. But I was lost. There was no connection between it and the fashion. The movie started with two people being carjacked. The thief is chased by the police and this resulted in a series of car crashes. By the end of it, I just hoped he didn't want his show to be a complete disaster.

The film ended and the models emerged. There was no connection between the fashion and the film, but I decided to ignored this. 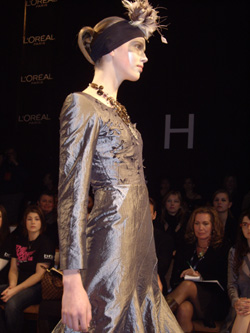 Later at home, I read the press material. The collection was called Smash. It was inspired by the fascination with police car chases and the models were supposed to suggest crash-test dummies. But their make-up was the wrong colour. Andrew used a silver and grey combination instead of yellow and black. (Like Vince and Larry.)

Andrew was one of the few designers at L'Oreal fashion week that didn't use leather or fur. Except for silk and cotton, his fabrics were synthetic. (These came from exclusive Italian mills that specialize in creating multidimensional fabrics.) He used striped, weaved and metallic cloth with cutouts for suits, skirts and jackets. Andrew created bias cut dresses with flared hems, lace godets and paneling. Some of my favourites included the brown leaf dresses with leaf cutout details, brown smashed full swing dress [see video], icy swirl jacket and the grey, tight-hem, angular swing dress with floral cutout details.

Prior to L'Oreal fashion week, Andrew showed his fall collection in London. He's been invited to Croatia Fashion week and plans to show again in London for spring 2008.

Final Pass of the Models

You can view pictures from the show at my flickr page, the official site and Wire Images.