Feral Childe presented their Fall 2007 collection called Alphabet City at the Drake Hotel Underground. Jillian Lock, representative from the Drake, mentioned that this was one of the first fashion shows held in the Underground. They did a great job with the setup. The runway was prominent and elevated. The event was packed and the all the available seating was taken leaving late comers to stand. I was impressed with the turnout. I didn't think it would be busy on a Tuesday night. There were many media personnel in the audience including a representative from FT. I think the fashion insiders were surprised to see Robin Kay, President of the Fashion Design Council of Canada, sit down in the front row. It seemed this show was on a lot of people's radar.

Before the show was a short video with a very interesting concept. It was a side view of marathon runners going by with the odd non-participant walking in the background. It seemed the artist overlaid the individuals to create the effect. It was intriguing for a few minutes and then I began to feel ill. I had to stop looking for a while, which means to me it was a few minutes too long.

Alice WU and Moriah Carlson attended Wellesley College together studying art. After graduation, the duo created Feral Childe. The name was inspired by "the idea of everything behind rough or uncivilized, [which] was true of how we approached creating the clothing, how we worked with the materials." Their interest in fashion came about because of their performance art. 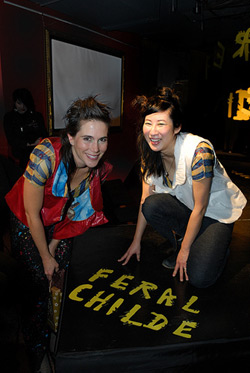 The Feral Childe man loves layering. Vests featured bold prints and colours that covered printed pullovers and multicoloured speckled denim. Moto Jackets were more subdued in black. For women dresses dominated in wool jersey and silk. Women's denim also received the speckle treatment. Silk-screened prints played a strong part the collection. The women's version of the Moto jacket featured a sleeker silhouette. It was among the several jacket styles presented. The duo threw in a bit of flash with gold lame skirts. I noticed a few owl accessories that instantly pinged my radar. I love the owl trend right now.

Taigaa! accompanied the fashion show. The female trio from New York creates music that I cannot explain but do enjoy. Their music and the direction the models were given matched each other. I did feel the clothing was a little more fun that how it was portrayed.

Alice and Moriah had a huge support staff behind them that included make up by Brandi Boulet and Robin Wright; hair by Jessica Lasagna, Ryan Bone, Tristan Brocklehurst and Olivia Woods; styling by Jessica Nicholson and photography by Charlie Lam. You can view the entire collection at his flickr page. My favourite piece is the Dufferin Jumper.

After the show, I didn't quite see the local connection to the clothing. There were prints that showed typical Canadiana like wolves, maple trees and Mounties but nothing that suggested a theme. It wasn't until I received the show photos did I see the local connection. The clothing had cute names like Dufferin Jumper, Beaconsfield pullover, Dovercourt duster and Queen Street jean.

Some of my fashion blogging friends also reported on this show and you can read their reviews.
Final Fashion
TFI Diaries by Carolyn Rohaly - 23 January 2007 entry

Feral Childe is sold in select boutiques in New York and Japan. They do take custom orders through their website.