The Globe and Mail Shows Us Common People How to Party

My dream would be for Karen Von Hahn to come to my dinner party. If only because it might get me that much closer to getting a write-up as shockingly pretentious as the twenty page spread in the Globe and Mail's spanking new Entertaining section which debuted this weekend.

The only thing more surprising than the fact the Globe conceived and supported this embarassment was that the host (Judith Tatar) and her dinner guests agreed to be in it. Then again, nothing says vanity than having your nation's national newspaper show how hip you are by outsourcing everything from your event invites to music selection to flowers to the food itself.

Quiet for a moment as we listen to the sounds of all the people not living in Rosedale in Canada puking in their morning Shreddies.

The Globe's editorial product once again fails to reflect the diversity of both this city and country. Tatar's oh-so interesting guests include twelve white people plus George Yabu and an Upper Canada College grad. Name dropping is par for the course.

Judith has been known to reschedule parties around the availability of Tony and his teammate Barton Cornego. "They know just the way I like everything done, but they are almost impossible to get," she said, "partly because they are better-looking than most of my guests."

"In the last eight days, I've been in Madrid, Paris, Dubai and Delhi. I've got more air miles than I'll ever use."

Two weeks before In honour of Pushelberg's predilection for Air France, Tatar's office designs and sends out an e-vite that looks like a boarding pass. Forwards e-vite to the hired professionals, so "that they know the attitude of the occasion." 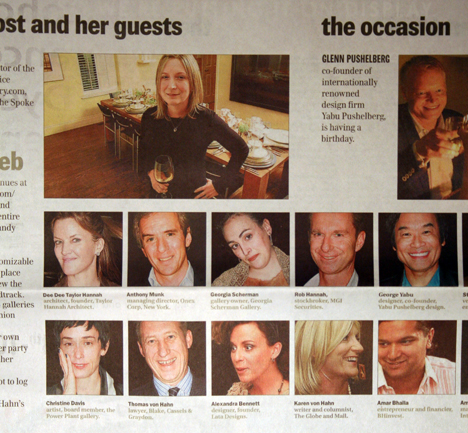 My big contention with the article is not that they actually ran it. Publications the world over, be they Toronto Life or The New York Times, have certainly printed their fair share of society and trust fund kid exposees. (And many can be interesting anthropological studies)

What is more discouraging is the extent to which the Globe featured and promoted it. (Really, an entire new section?) And pretend this is actually relevant, important, helpful, admirable, interesting or something to which we should all aspire.

And there's more! The party continues online at the globeandmail.com/entertaining where we get to learn more pointless details and exchange repartee with Von Hahn herself who will be logging on Monday to perhaps fill us in on what soap was featured in the washroom; and who conceived it, purchased it and whether someone remarked it was fabulous.