I haven't talked about the free stuff that comes your way at L'Oreal Fashion Week. They provided the media with a L'Oreal Fashion Week branded tote filled with free goodies. There were many product samples like razors, perfume and toothpaste. A few gift certificates were among the products. I was happy with the free mascara I got. In the media room, you could find dishes full of lipstick and nail polish. The washroom had a huge bowl of razors. I don't need to buy another razor for a while. The media room had great food and non-alcoholic beverages. The sponsor's room had all the free alcohol; however, the food wasn't as good. I managed to get a peek at the VIP room because I knew a few people that were part of the Holt Renfrew buyers contingent. 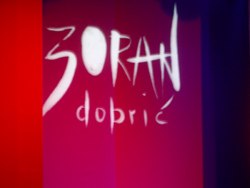 Day 3 started with Zoran Dobric. His collection featured prints on jackets, shirts, and skirts with both asymmetrical and traditional hems. Japan influenced the spring 2007 collection. The kimono-inspired jackets were standout pieces. Geometric prints adorned most of the collection. I prefer a traditional hem for skirts but I found myself admiring the small rouching along the hems of the asymmetrical skirts that were coming down the runway. I think some of the sheer garments would have looked better with a shirt underneath them instead of bras. They were distracting and didn't coordinate with the outfits very well.

Common Cloth took the stage next. The models were walking too fast and it was hard to see get a look at the clothing. I did love this royal blue baby doll dress with a peter pan collar and a few of the dance-inspired dresses. The Common Cloth boutique is now open and is located at 1100 Queen Street West.

The Bustle show was well produced and executed. The golf and the country club lifestyle inspired the collection. The runway looked like a fairway and golf prints were present throughout the collection. They strategically placed the graphic on ties, hats and the lining of jackets. The models were enjoying themselves and that made the show fun to watch. The clothing was not my style but it looked very well made. I did like the short shorts actually. The music was from the 80s. It was funny to hear songs that I haven't heard since then like "How to Be a Millionaire" by ABC.

There are many people at Muzik for the Andy ThĂŞ-Anh show. It's the final show of my day 3. It was a high-energy show complete with loud dance music and club like lighting. Dresses and skirts dominated the large collection and the occasional pantsuit made an appearance. Metallics were a large part of this completely wearable and marketable collection. I enjoyed the show, anything that incorporates Slave to the Rhythm by Grace Jones is okay in my book. Seems the crowd liked it too, Andy got a standing O.

I started day 4 with Izzy Camilleri. She has gotten a lot of buzz recently. Meryl Streep wears one of her jackets in the movie The Devil wears Prada. Peopled filled Muzik once again and I was glad to have an assigned seat. Media and sponsors gained entrance into the seating area before the general masses. Like Andy ThĂŞ-Anh, this was another well produced show. It had two sides, the soft and the hard. The soft side featured turquoise, cream, gold and topaz colour schemes. The harder side of the show featured black, silver and white. Black leather corset belts left me drooling in the stands. The collection used taffeta lace, leather and brocade fabrics. As with others, metallics were a major component of this collection.

Joeffer Caoc had the task of following up Izzy's well received show. He delivered a collection of easy to wear feminine pieces. The palette was a lot of gray, white and silver. The relaxed style of the collection had a sexy edge with the use of shimmery silver fabrics and sheer layers.

The final show I attended was Charles & Ron from Malta. The duo came to Toronto to show off their talents. The collection was inspired by Hollywood films of the late 30s and early 40s, particularly, The Women. The palette consists of black, ivory, sand, red, white and silver gray. French lace, silk and crystal organza, printed stretch cotton, chiffon, silk and crepe satin are the fabrics. The collection featured many gowns and there was series of black gowns with French lace cutouts placed strategically for a dramatic effect.

I tried to get invites for Paul Hardy and Pink Tartan on the Friday but I was unsuccessful. The Paul Hardy rep was great and returned my email. She mentioned that I would be included next year. Pink Tartan didn't even bother to reply. I did hear from a little birdy that their show was an hour and a half late, which also delayed Paul's show. 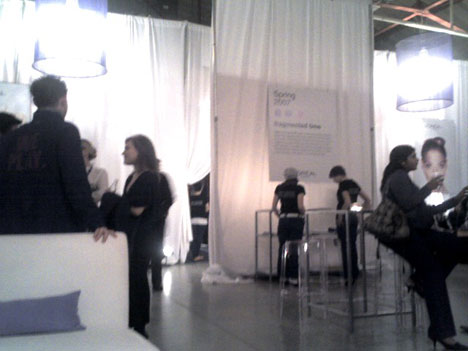 I liked it when designers left descriptions of the collections in the media room (pictured above). Not all the designers did this and I didn't know any of the inspirations for the collections. I also had no idea of what fabrics the designer used. I don't have best eye for that kind of thing. Overall, I had a fun time at fashion week. I'll plan to attend more events during the Fall 2007 shows and perhaps I will book some time off work so I can party into the wee hours of the night.

Other sources for fashion week coverage.

Toronto Street Fashion - Rachel and Sonja were featured on Canada.com click the link "Video: The girls behind the web site" in the Take it to the Street section

On a side note, Jeremy Laing's SS 2007 collection was part of Olympus Fashion Week. You can view Jeremy's collection at Style.com.

photos: top - George Pimentel, all others me