Terminal Barber Shop 2 is currently open but their offerings and services may be affected due to the pandemic. Please contact the business directly for more information about any changes. Is this your business? Please contact us if you would like to update this message.

Terminal Barber Shop 2 has recently sprung up around the corner from the original . When Karim Saaden and Omar Mahrouk bought The Terminal in 2005, the venerable barbershop had been in business for eighty years. They gave it a retro makeover, rewinding it past its founding decade to a clubby, Knickerbocker baroque. They've kept the same theme with their newly-opened location.

While it might seem mad to set up a shop to compete with themselves, Saaden says the reason was simple - they were turning customers away when the tiny shop got busy, and figured that it would be better to send them around the corner than lose their business altogether. The new shop retains the same love of Victoriana and gilt, right down to the century-old reconditioned barber chairs and the polished, ornate brass on the vintage cash register, but there's a lot more room to move. 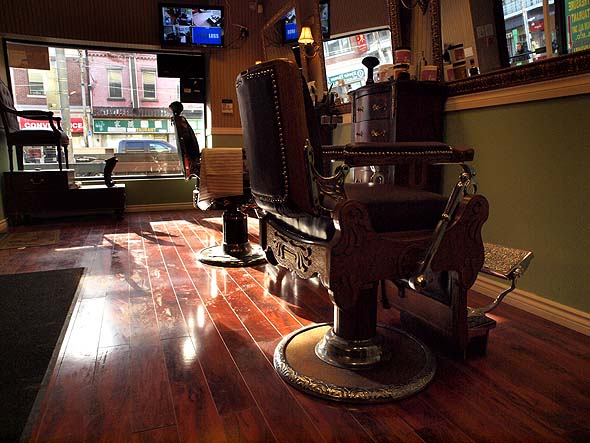 A few years ago, it looked like the old school barber shop was going the way of the hatmaker and the cobbler, but fresh blood has been entering the business, both from young cutters more interested in being barbers than hair stylists, and an influx of immigrants who learned their trade abroad, many of them from North Africa (Saaden and Mahrouk are from Algeria) and the Middle East . The latter come from a full-service tradition that was preserved in upscale shops and high-end hotels, and insist that a shave and a haircut is more than a few passes with a straight razor and a buzzing hair clipper. 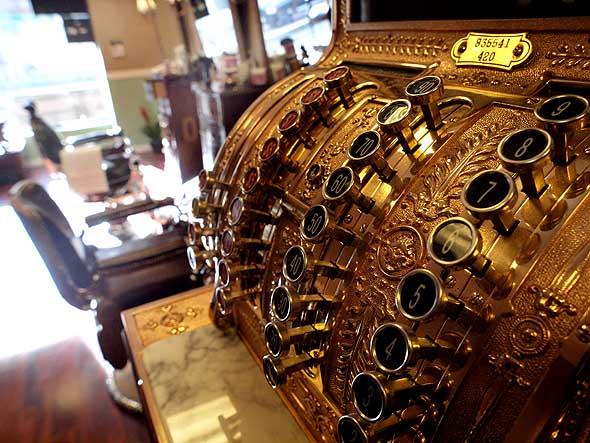 During a morning lull in the new shop - two blocks over, three of the four chairs in the original shop are filled - Saaden tells me that retaining customers is the key to a barbershop's success, and the reason for the satellite location. "When a person comes here and sits in my chair I make sure that person comes back - no matter what it takes."

The prices are a bit higher than the average fluorescent-lit barber shop - $22 for a haircut and $27 for a shave - but the attention to detail is worth it. Saaden offers me a shave, and sporting a coarse, sandpaper-like two-day growth, I know that I'll be able to test him out much better than if I had a full week's worth of fur. 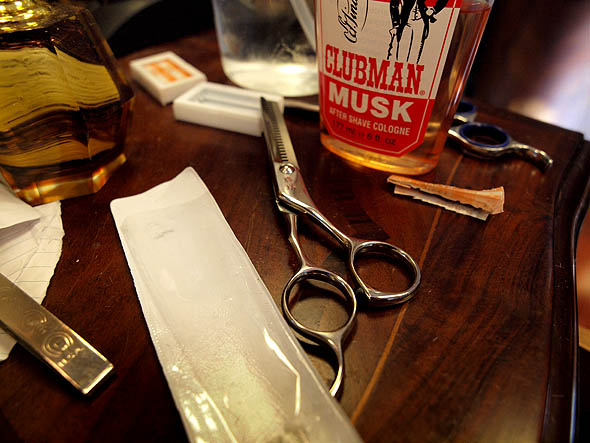 It's a methodical process, with alternating applications of cocoa butter, shaving soap and hot towels, with nice little details like the tiny splash of Clubman's floral shaving musk to the first hot towel, just beneath my nose, to cut through the steam and wake me up. At the end I have a close, clean shave, nothing missed, and no hint of rash or razor burn - a stellar bit of work. It all ends with a quick massage on my scalp and shoulders, typical of the attention to detail that Saaden and Mahrouk are sure keeps customers.

As I leave, Saaden tells me their favourite joke: "We know more men who've left their wives than their barbers."