Plus is currently open but their offerings and services may be affected due to the pandemic. Please contact the business directly for more information about any changes. Is this your business? Please contact us if you would like to update this message.

Plus is a luxury consignment streetwear store dealing in limited sneakers and collectors' items from brands like Supreme, Bape, Nike, and Off-White.

An acronym for People Like Us, this is the second location of the highly-popular concept launched in Vancouver by Ibrahim Itani and Andy Zhu, a pair of young streetwear enthusiasts. 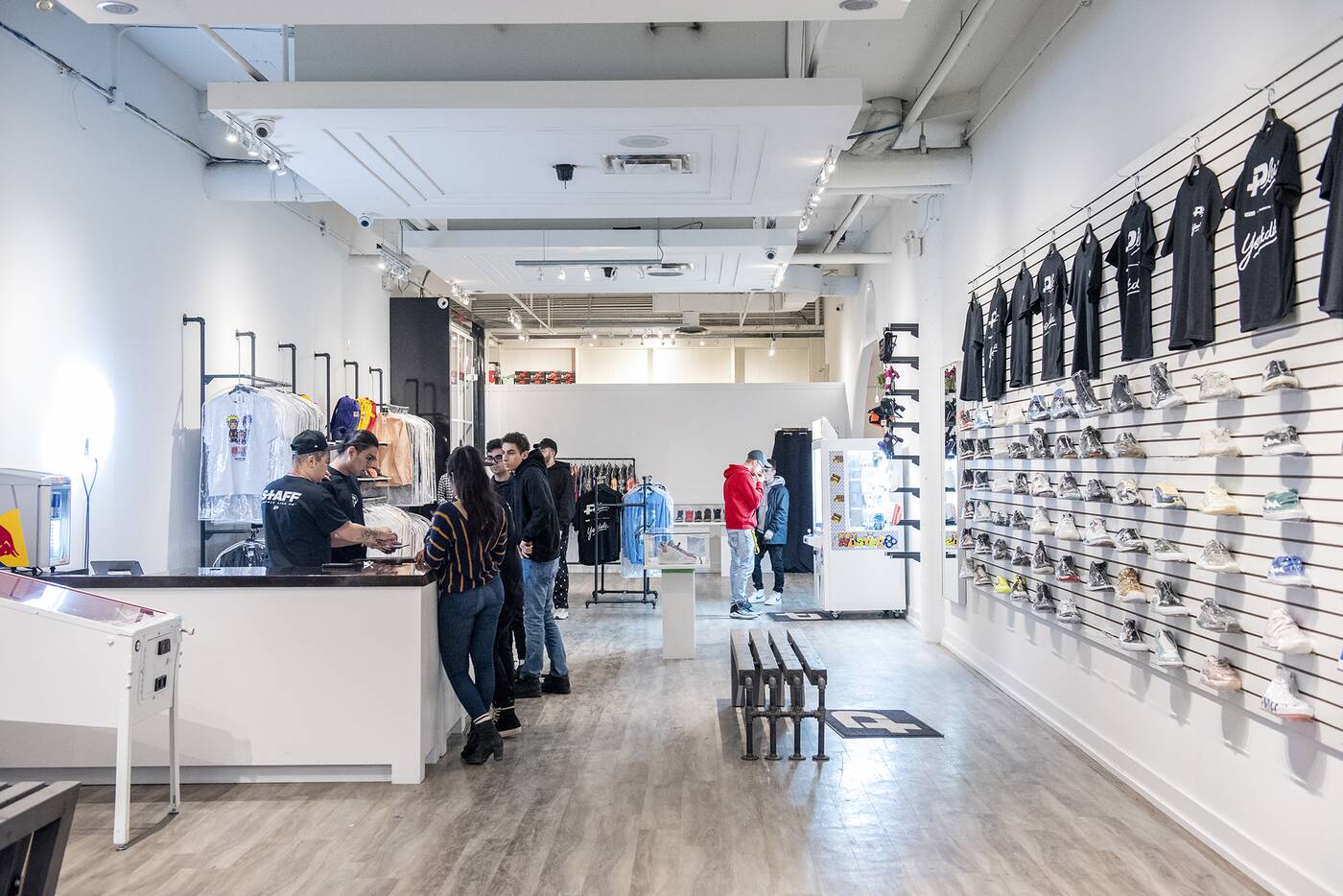 Catering to a new generation of well-moneyed shoppers, the Plus era of luxury is one where traditional brands like Louis Vuitton co-exist with Supreme—the poster brand for new age opulence—and other names from the streetwear world. 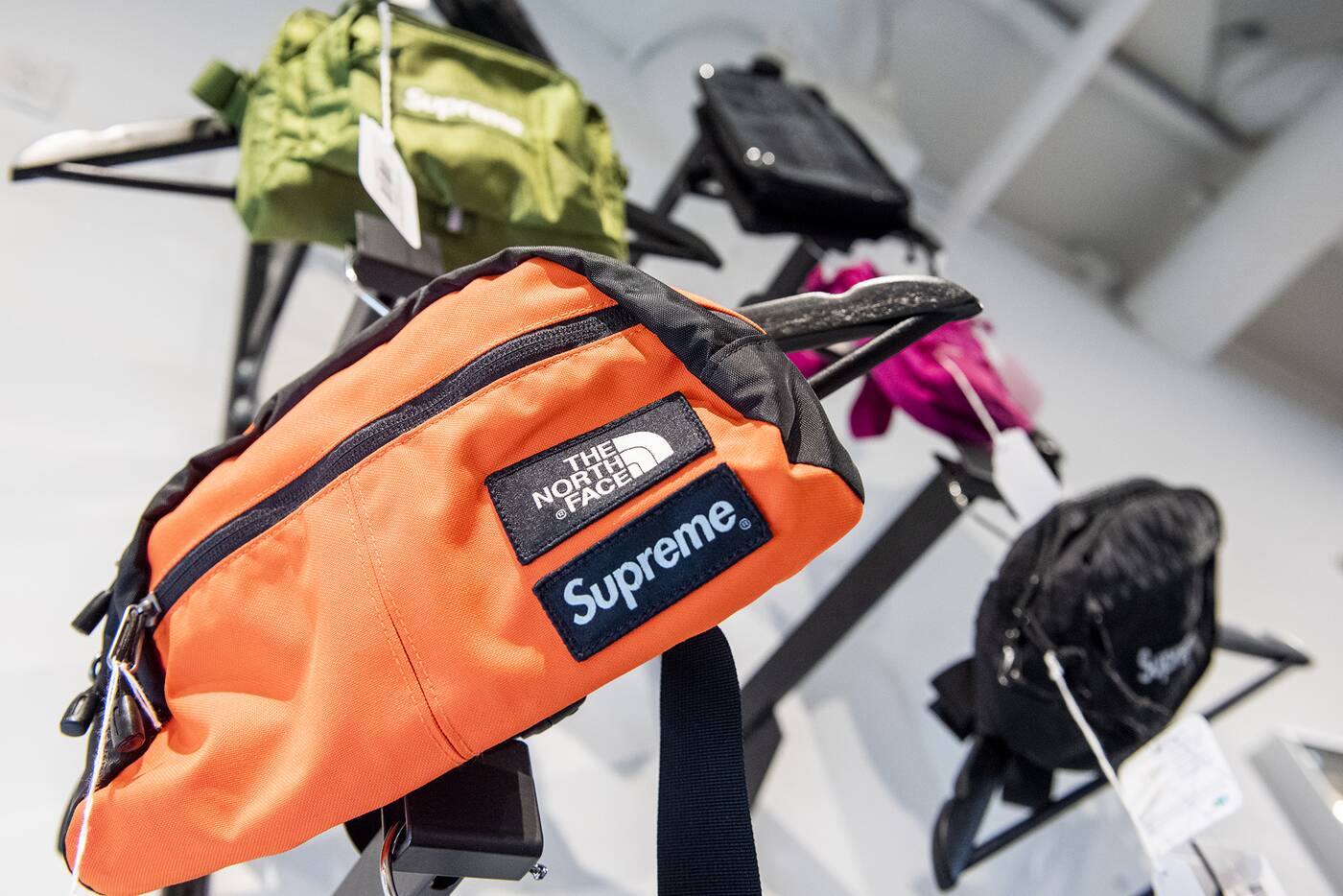 The store is pretty easy to find: it's just a five minute walk from the Yorkdale subway station entrance in the mall, and has a loud store display stocked with brand name stuff, like the first Supreme punching bag to ever be displayed in Canada. 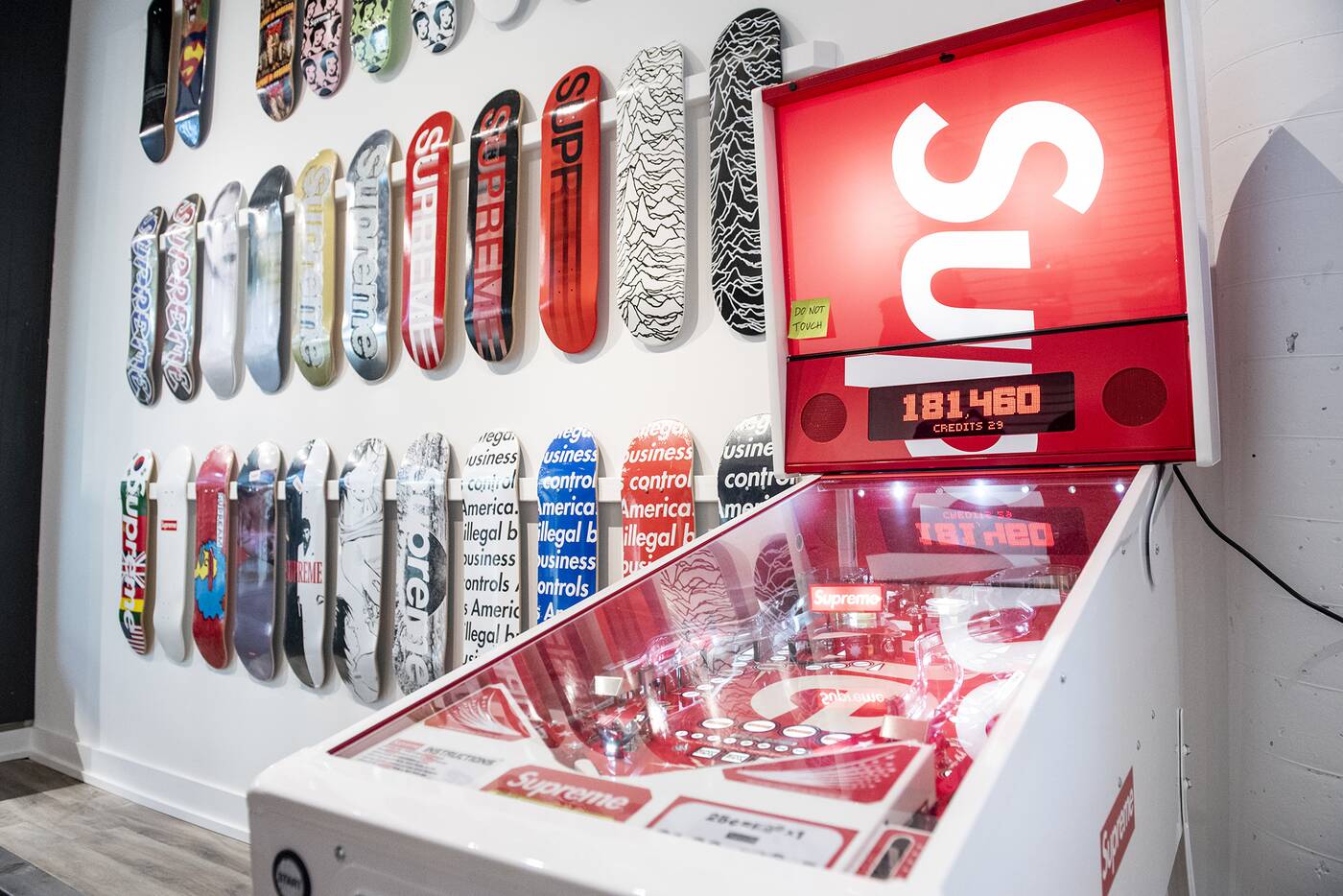 Other ridiculously huge and branded items include a last-season Supreme pin ball machine acquired from a collector in the States, that's more for display than actual use. 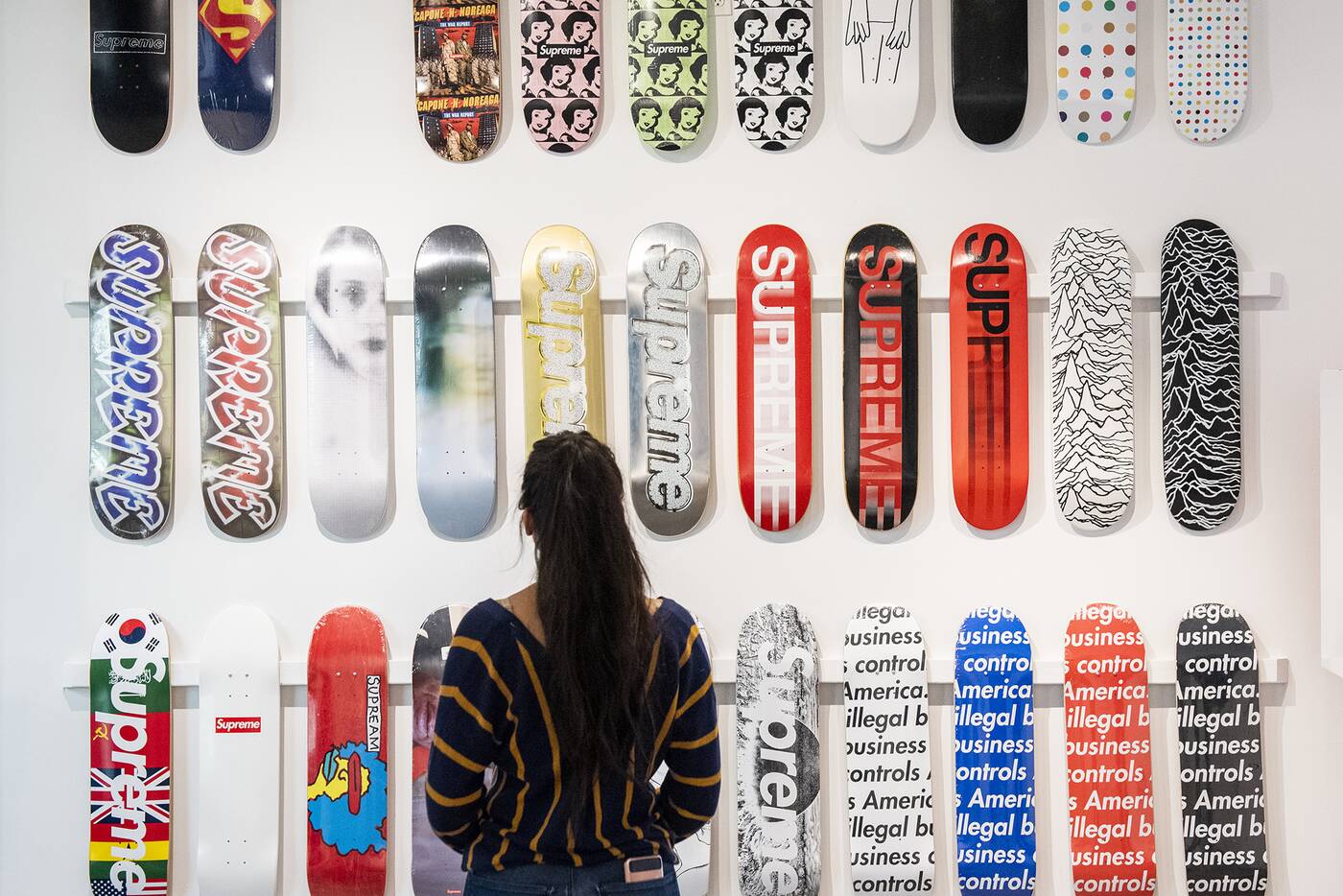 Also more for display, a Supreme skateboard deck wall featuring rare sets made in collaboration with Damien Hirst and Disney, though there are more accessible decks in the back for purchase. While the majority of items here will require you to drop at least a few hundred dollars, there is a sneaker wall of standard general releases that run at average price points for Vans, Adidas, and Jordans. 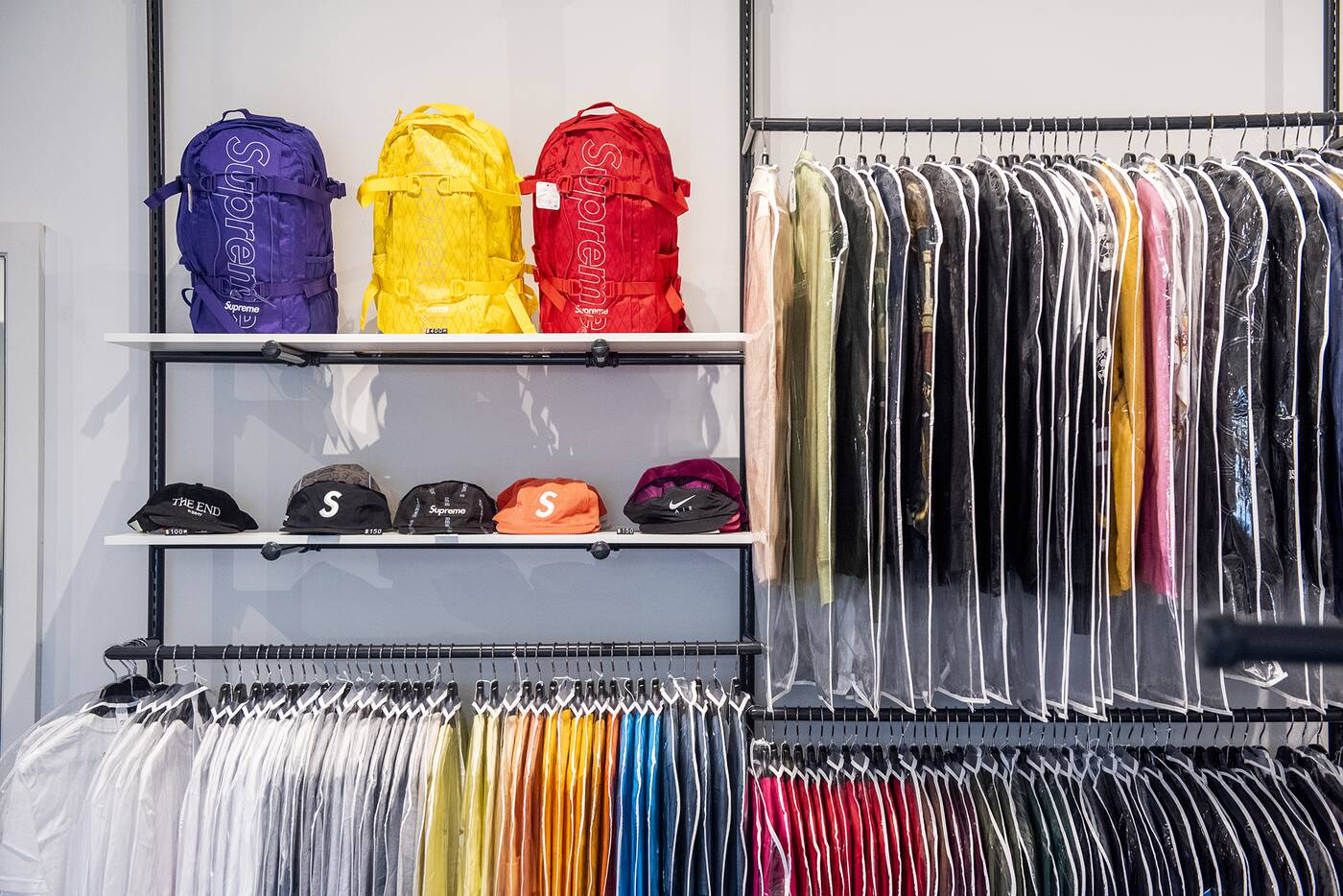 While the red and white logo of Supreme definitely represents the majority of collectibles and clothing here, the store also carries several racks of sweaters and t-shirts from core brands like Off-White, Bape, and Anti Social, all safely sealed. 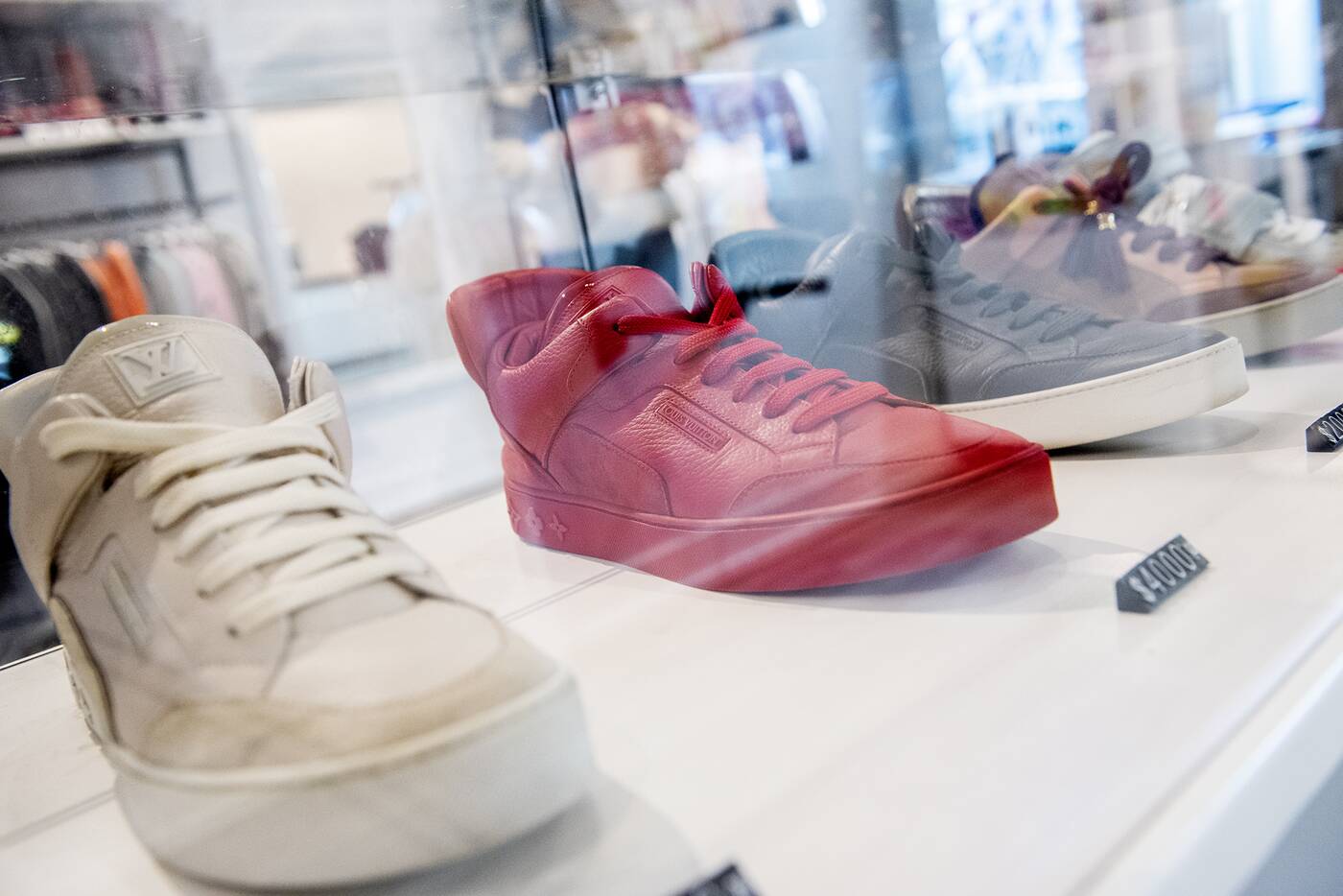 Not so cheap: glass displays dedicated to Kanye West's shoe designs including some from his original Louis Vuitton collaboration released in 2009. 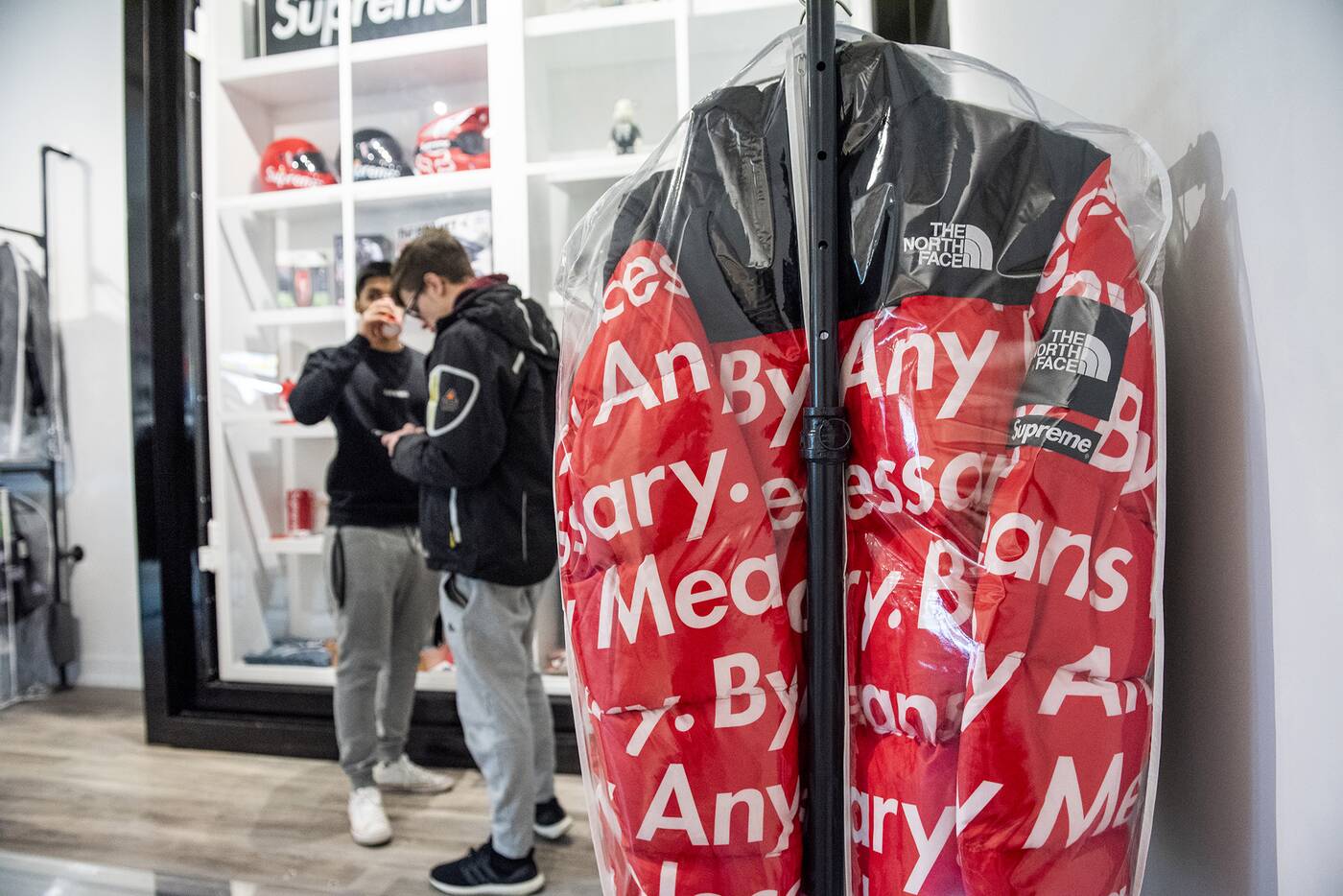 In the back, a rack of Supreme and North Face Nuptse jackets from the 2015 By Any Means Necessary collection, next to the Leopard collection ($3,000-$4,000) more widely known as the jacket Drake wore in The Motto music video with Lil Wayne. 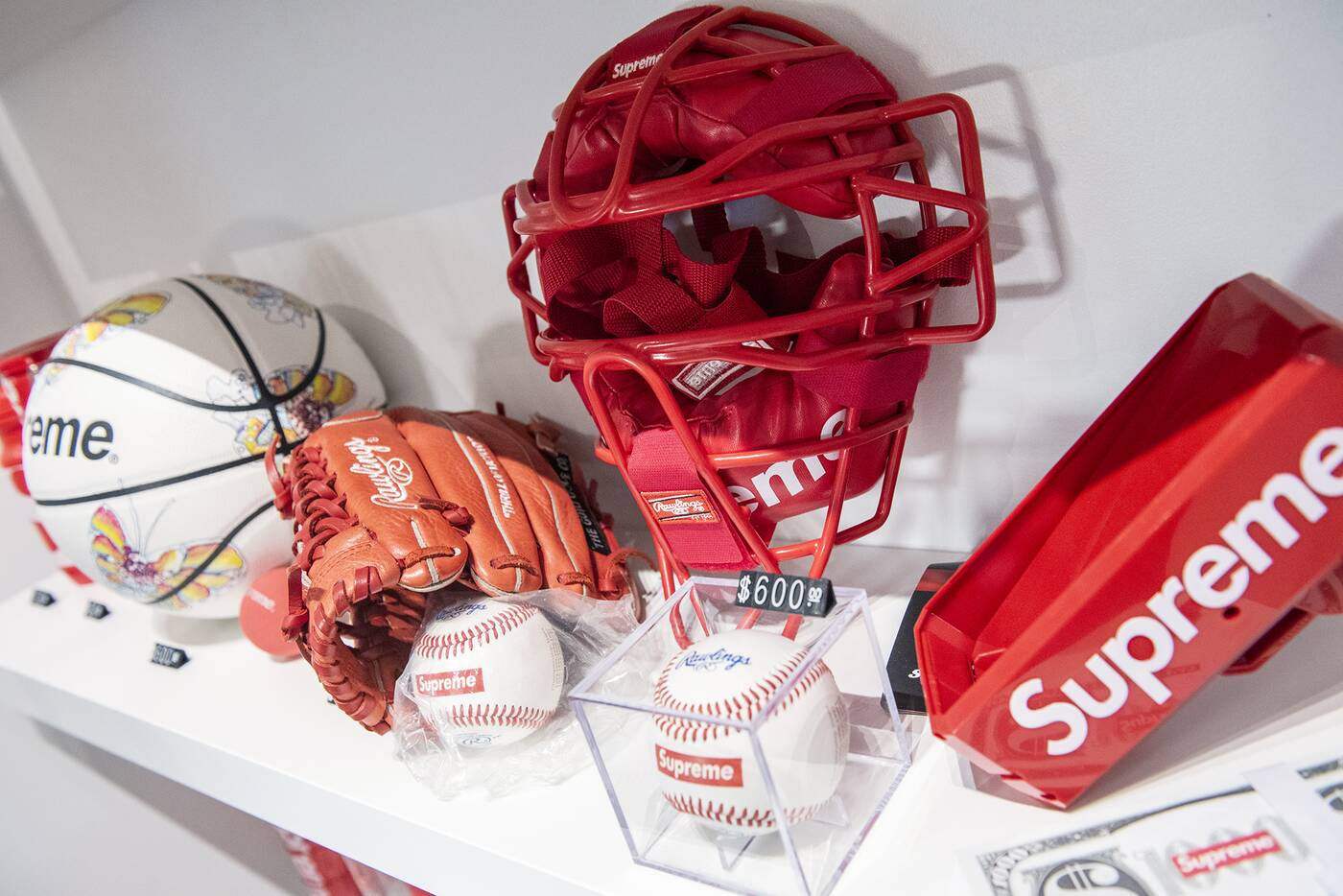 Located past that is the real mind-boggler: a giant glass case filled top to bottom with collector accessories that range from the mundane to the outrageous. 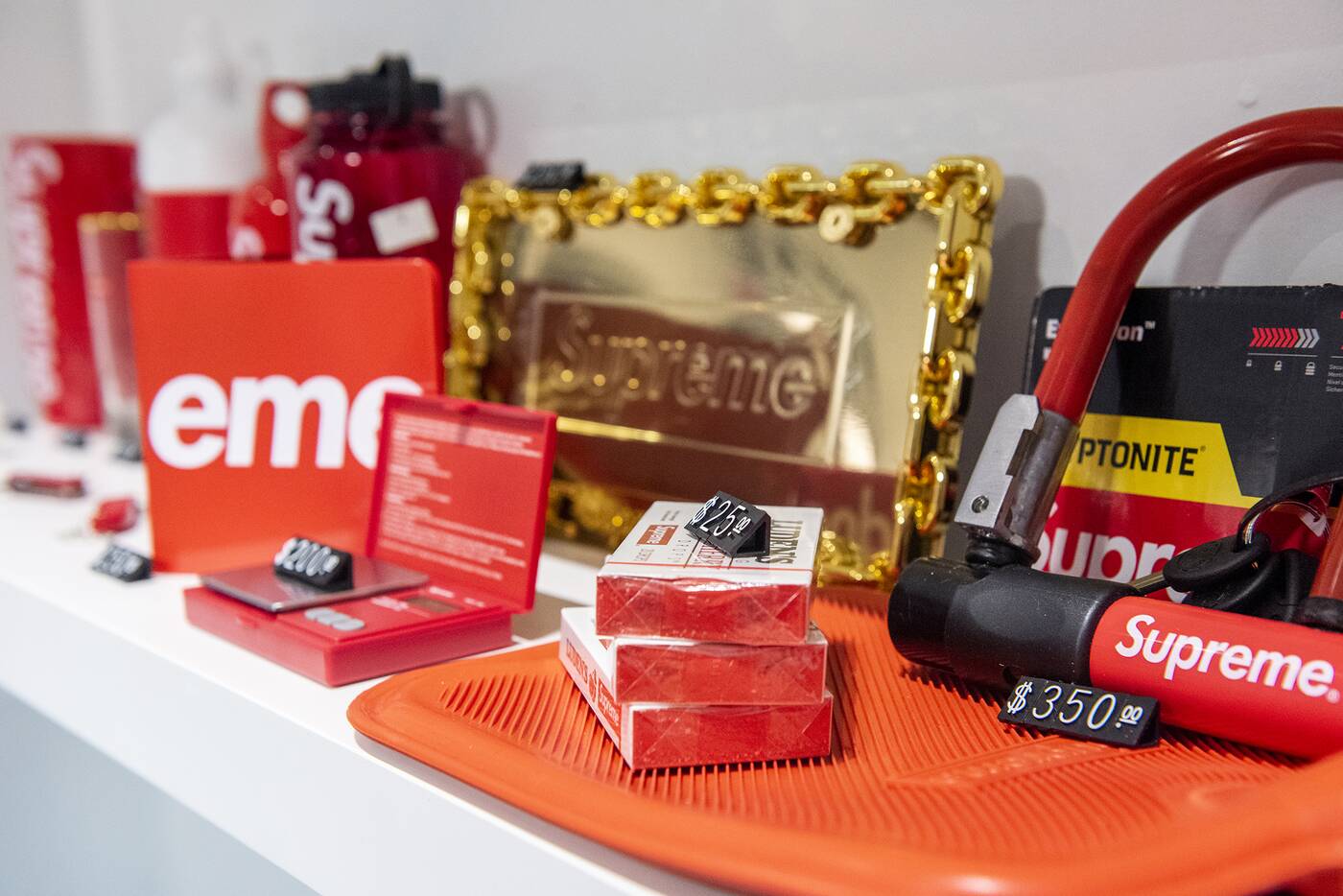 Red and white sports water bottles ranging from $110 to $400, a beer glass for $300, a trio of Wilson tennis balls for $80, a basketball for $300: all everyday items transformed into luxury items of status by the ubiquitous Supreme logo.

Up top, Nike's first edition Back To The Future (not the self-lacing ones), first debuted in 2011—one of 1,500 pairs released. 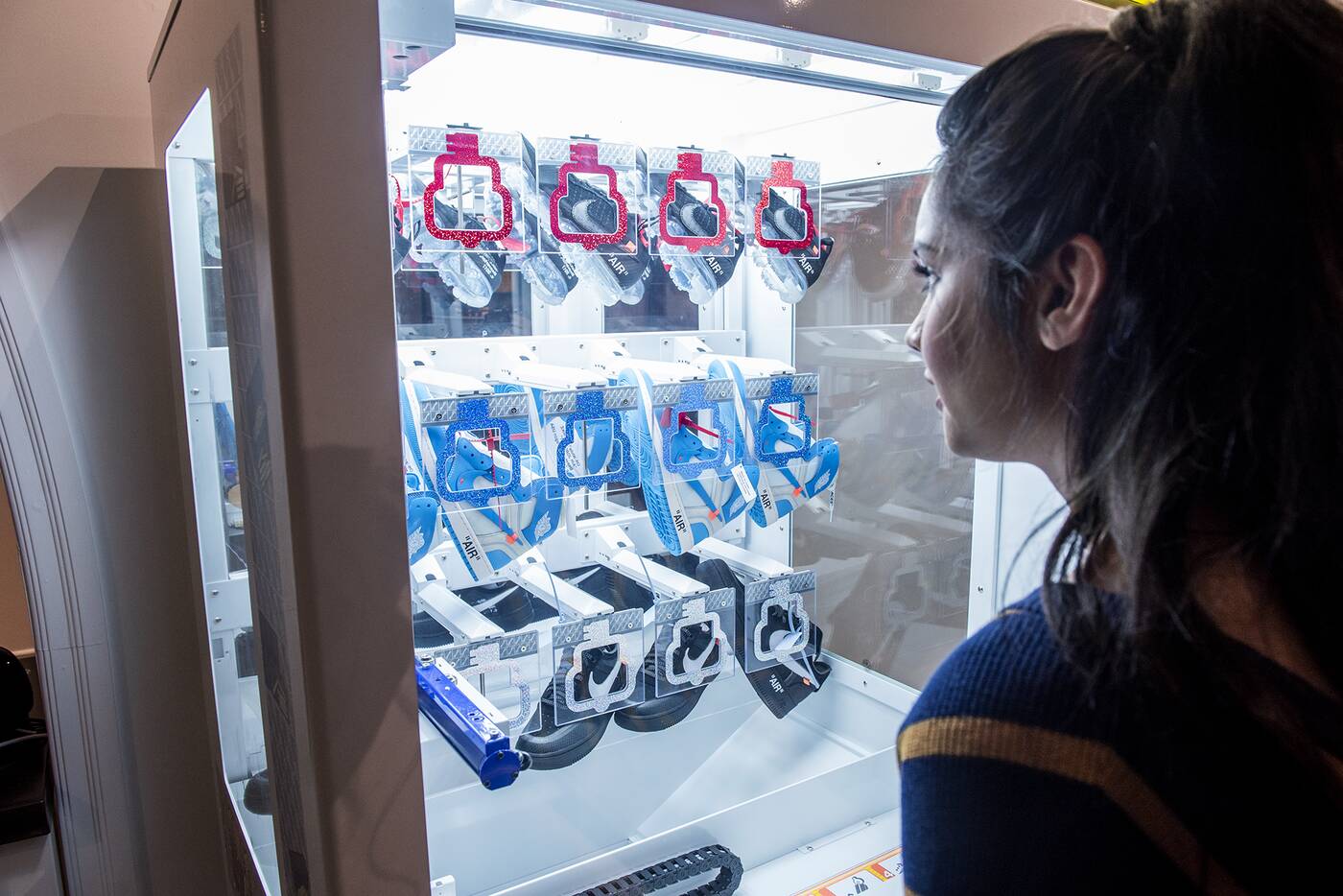 Cough up $5 for a chance to win some sneakers from the Key Master Pit: the cheapest you'll pay for some Nike Air shoes. 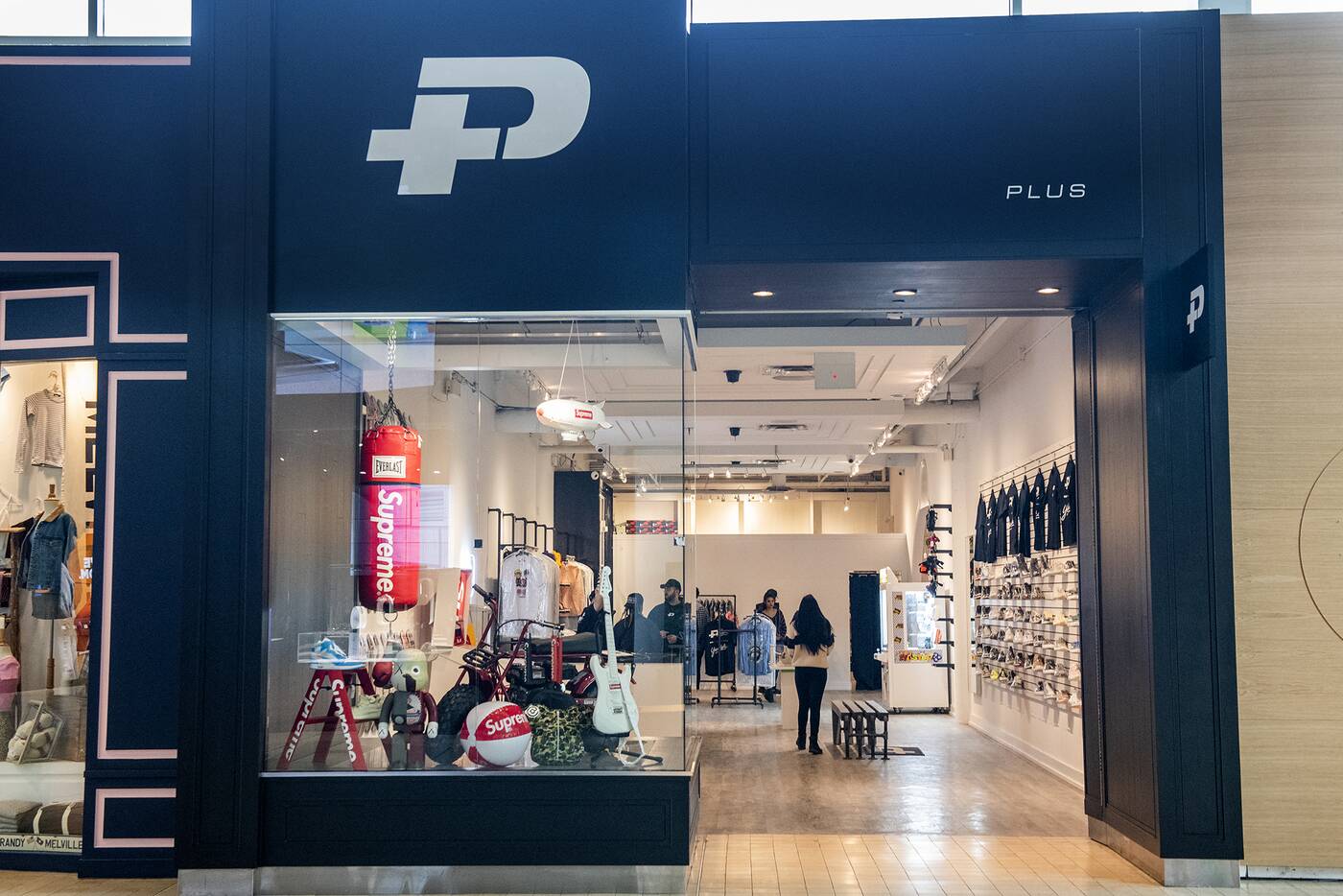