Goorin Bros. is not your typical downtown hat store. For one, none of its pieces come with stickers on the brim, nor it is not recommended that you keep tags on after purchase. That's a healthy start, now isn't it?

Indeed, this is not a place of team logos or snapbacks, but a shop with a rich history that dates back more than 100 years. Started by craftsman Cassel Goorin in 1895, the business migrated from Pittsburgh to San Francisco in 1949 under his sons' ownership, and has since opened more than 20 stores across the United States. 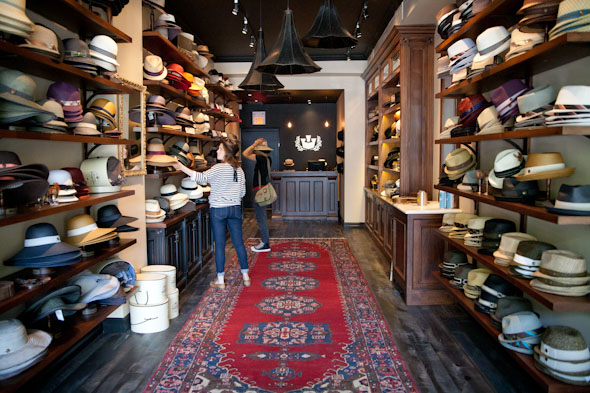 About two years ago, Goorin Bros. made its Canadian debut on the streets of Vancouver, and now it is Toronto's turn. On Queen West just east of Spadina, Goorin Bros. has doused its shop in nostalgia with reclaimed wood floors, hanging lamps made from vintage gramophones, and other little trinkets of times past. But it's the hats, surely, that emit the strongest vintage vibe. 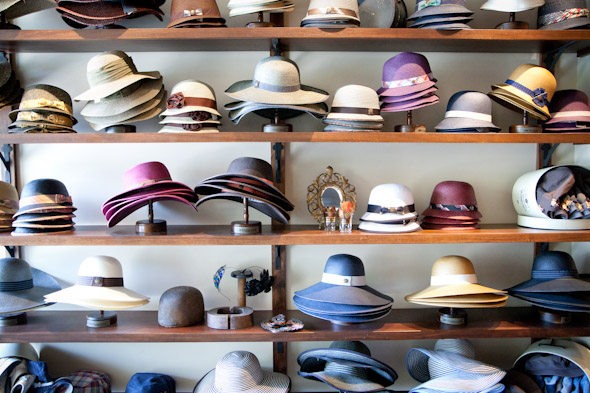 First there's the Heritage line, which manager Jen tells me are cut by hand using the original 1920's hat blocks. These are primarily your classic leather and wool fedoras and cloches, including the short-brimmed wool "Smitty" for men in charcoal ($120) and refined "Blueberry Hill" for women in violet blue ($150). While all of the hats can be purchased as is, you can customize your piece with individual feathers ($3), and one-of-a-kind sterling silver pins ($51) that are sourced from an independent collector in the States. 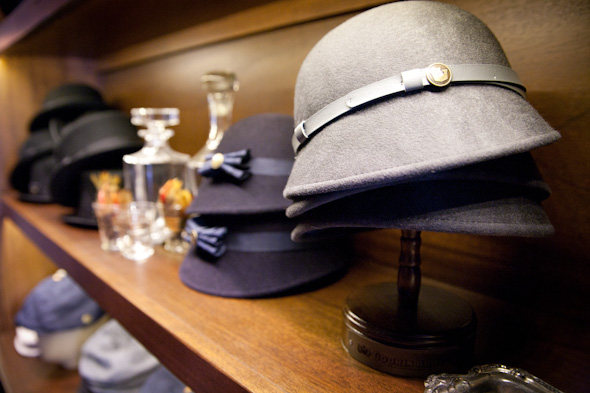 "This line is made in the U.S.," Jen says, referring to the Heritage hats. "But these," she says, walking over to the shelves of Panama pieces, "these are all hand-woven in Ecuador." 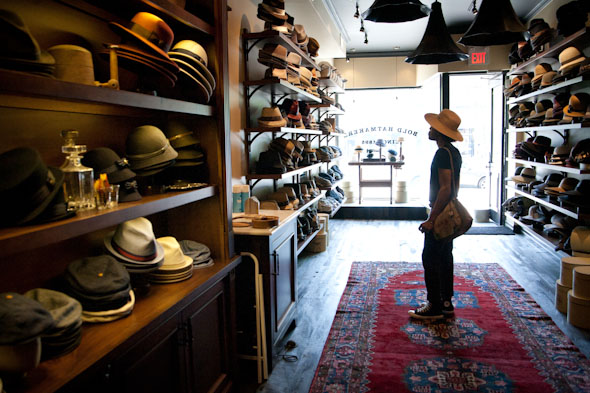 Jen tells me that Goorin Bros.' owner (Cassel Goorin's great-grandson) travels to any factory where production is outsourced. "Just to make sure it adheres to our values," she says. The Panama line seems perfect for summer, with a Kentucky Derby-inspired straw hat with an oversized rim and band steals the spotlight ($160). 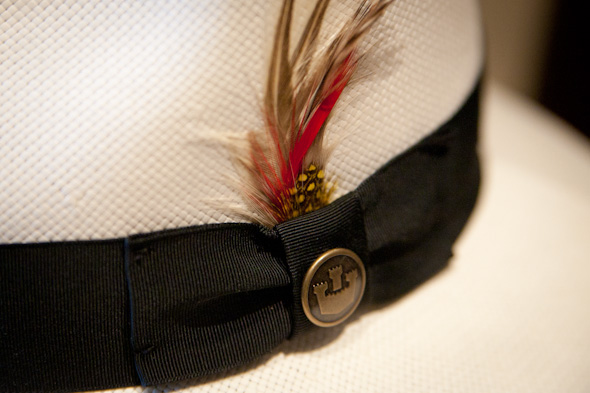 In terms of contemporary streetwear styles, Goorin keeps up with its XO caps designed by artist Victor Reyes, and its Animal Farm snapback trucker hats with rooster, beaver, and cat patches on the front. Jen says most styles with stick in store for the summer before switching over to more cooler-weather options for the fall. 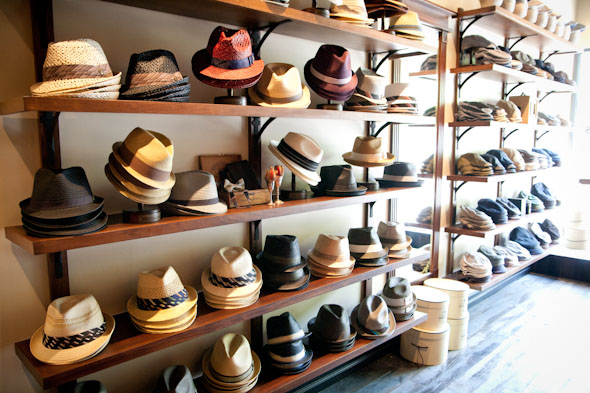 The coveted Goorin Bros. hat boxes do come at a price — about $18 for the nude boxes and $12 for black, though Jen says stretching and steaming will be offered for free. 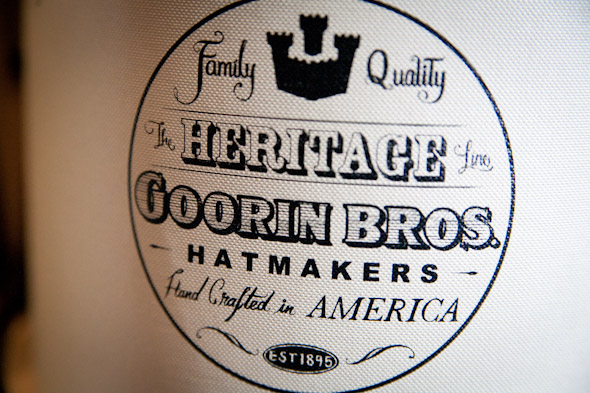 "If you got an old hat from your grandfather or something — even if it's not ours — we'll try to stretch and out and make it work," she says. "If we can rescue it, we will."

And if not, Goorin Bros. has more than enough new options that will give you that same feel. And no stickers on the rim. 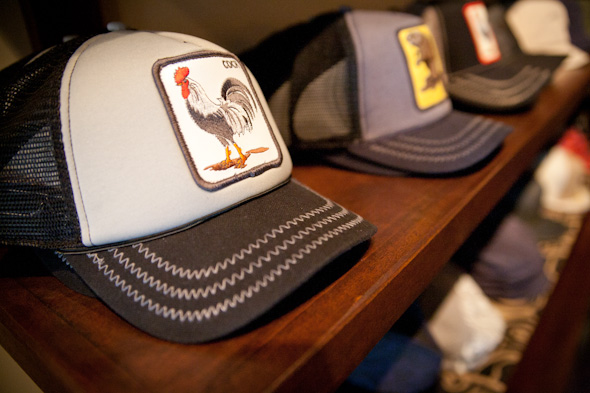 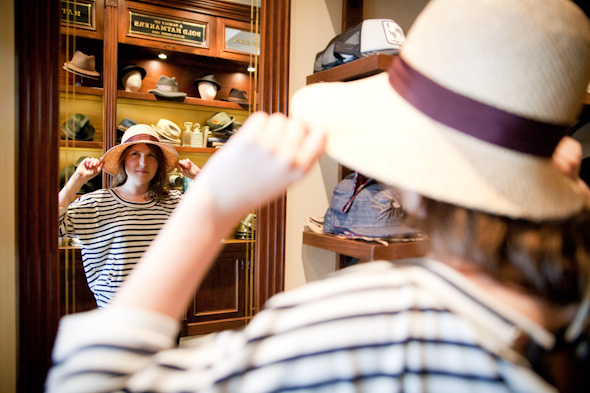 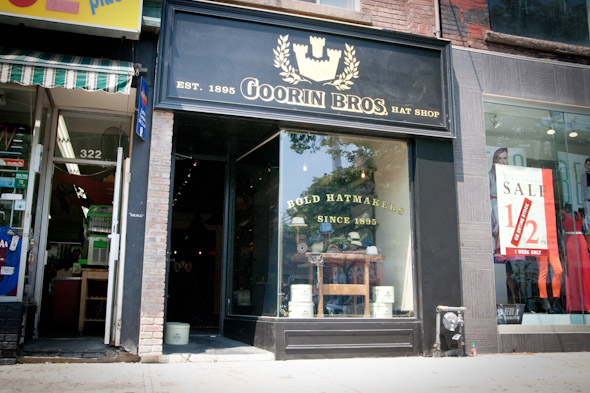