A single mom from Oshawa, Ontario, claims she was ill for three days after eating undercooked chicken from a Toronto McDonald's location, and alleges that management of the franchise in question has been less than helpful through her nausea-inducing ordeal.

blogTO reader Rebecca Boyd says that after picking up her three-year-old daughter from Scarborough Town Centre on January 7, the pair stopped at a nearby McDonald's at 1280 Markham Road, grabbing some chicken nuggets from the drive-thru.

Boyd says that, at first, the nuggets were too hot for her daughter to eat, "so she waited," which would soon prove a lucky choice for the wellbeing of the youngster.

Rebecca was less fortunate, telling blogTO that she "ate two and a half before noticing that they were raw and mushy on the inside."

"I might have noticed earlier, but I was super hungry from not having eaten all day," she sasid.

Out of concern that the undercooking was more than just a one-off mistake in the kitchen, Boyd says she called the manager of the fast food restaurant right away, but was unsatisfied with the outcome of the exchange.

"All that was offered was a refund, and only if I drove back to the same store, 36 km away, with my three-year-old in tow," says Boyd.

"The manager, Deepam, wasn't accommodating at all and didn't seem to care much about this happening, which makes me wonder how many other people have had this," says Boyd.

Frustrated by her exchange with the fast food joint's manager, Boyd contacted Toronto Public Health, though she says that an inspection deduced the incident was likely the result of human error, and ultimately, no action was taken by the city.

After consuming the undercooked chicken (photos provided to blogTO show what appears to be pink, almost raw meat beneath the breading), she went to bed "expecting the worst, set out some buckets, towels on the bathroom floor and got the Gravol ready." 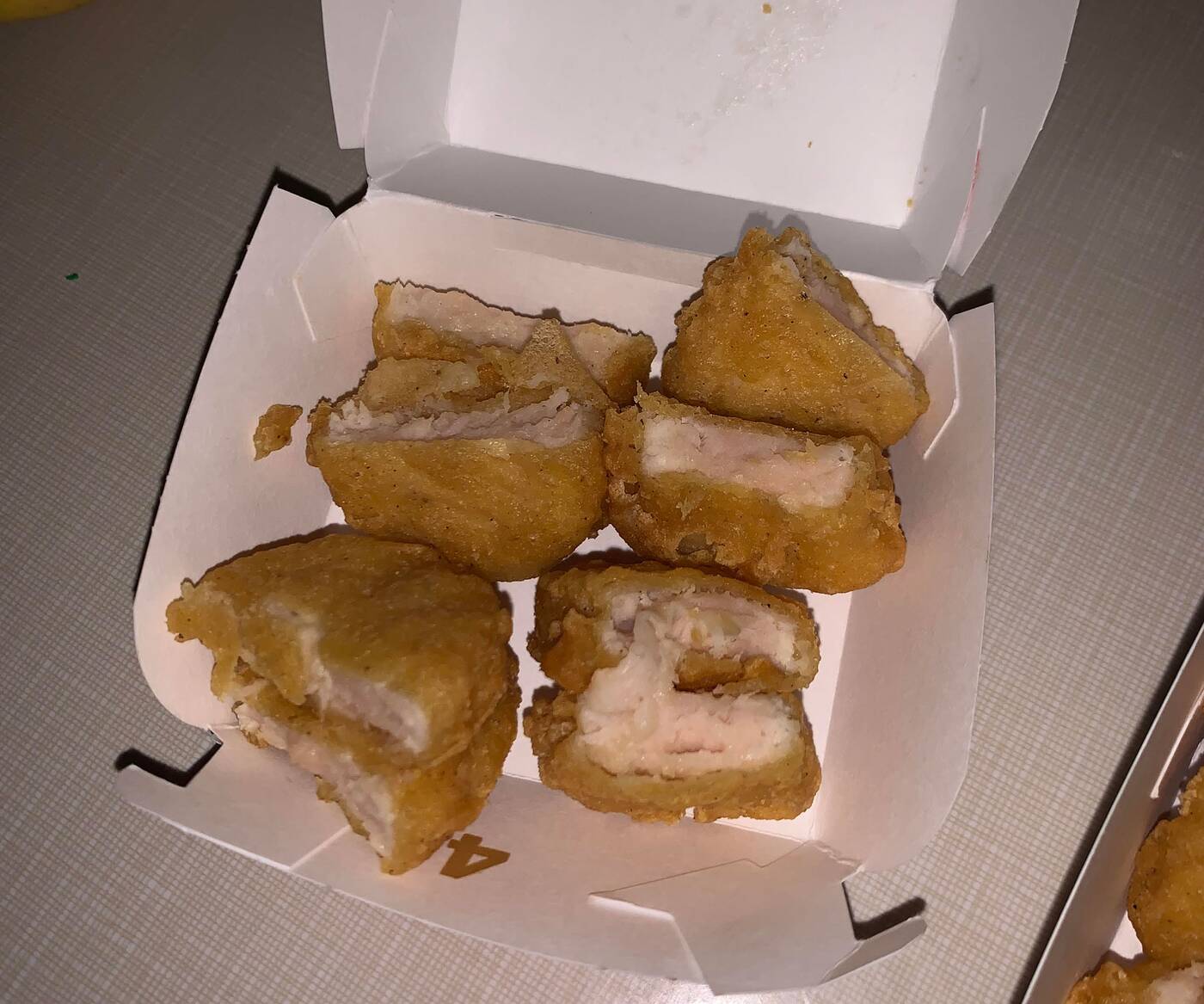 Her intuition proved correct, as after going to bed, she alleges that she woke up with nausea and flu symptoms that persisted for a day and a half, and was feeling generally ill for three days.

She tells blogTO that, despite all of the unpleasantness she endured over what was supposed to be a quick snack, she's thankful her young child didn't get sick.

Boyd says the visit to the Midland Ave. and Progress Rd. McDonald's location and the subsequent handling of the situation by the restaurant's management left her feeling "totally disgusted."

As for McDonald's Canada, blogTO contacted the corporation's media relations office early Monday morning seeking a perspective from the other side of the golden arches, but representatives of the ubiquitous fast food brand have not responded to the request.

Left on read by McDonald's corporate folk, blogTO also made multiple attempts to contact the specific franchise for comment, though phone calls to the location went unanswered.