Montréal undoubtedly eclipses Toronto in some sectors of the nightlife category; need I remind you that there are only five strip clubs remaining in Canada's largest city? A city that's notoriously stingy when approving licenses for such establishments?

The Jack Dorsey-founded tech giant Square has in fact declared, based on our spending habits, that Toronto is now one of the most party-hardy cities in North America, beating out the only other two Canadian contenders — Vancouver and Montreal, obviously — by quite a bit. 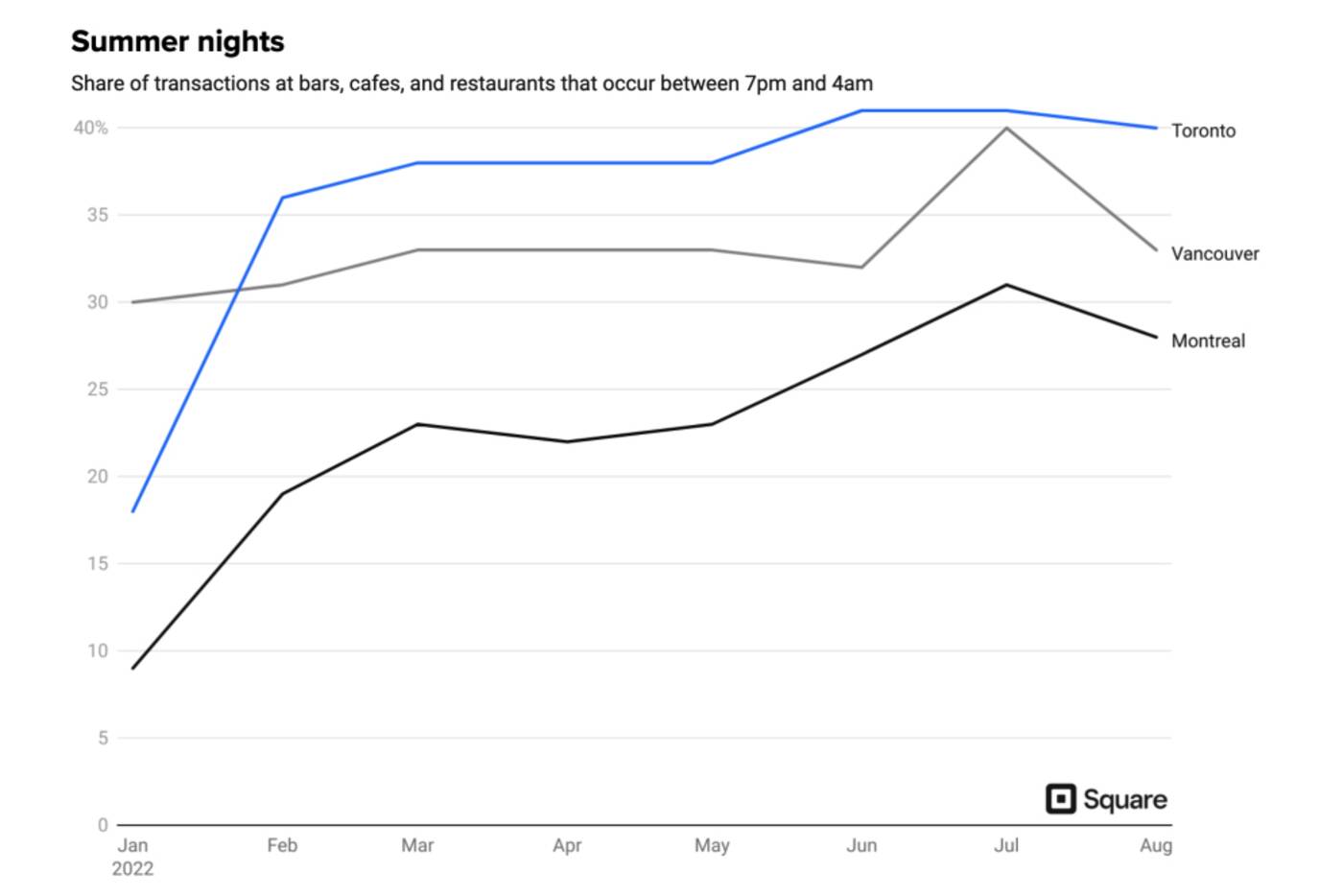 Warmer weather leads to greater spending at night, according to newly-released data from the payment processing company Square. Image via Square.

"Square analyzed millions of in-person nighttime spending transactions from Vancouverites, Montrealers and Torontonians at bars, cafes and restaurants, and the results were surprising," wrote the company in a release on Tuesday when announcing their findings.

"Montreal has long been hailed as the sophisticated, worldly and fun city compared to Toronto, but the data shows that Torontonians lead the nation when it comes to nighttime payment transactions."

More specifically, it means that Toronto had the highest share of payments made in-person at bars, cafes and restaurants between the hours of 7 p.m. and 4 a.m. over the period of time.

Square reports that 39 per cent of Toronto's daily transactions occurred at night, compared to 25 per cent in Montreal and 34 per cent in Vancouver.

Miami and New York bested Canada's new party capital with shares of 40 per cent and 42 per cent respectively, but Toronto did beat L.A., which tied with Vancouver at 34 per cent.

Consumer trends suggest that major cities are starting to recover from the impacts of lockdown measures in 2020 and 2021. Image via Square.

This all differs from what was observed prior to C19. In 2019, Montreal was leading nighttime payment activity in Canada with a share of 27 per cent compared to Toronto's 24 per cent and Vancouver's dismal 19 per cent.

Canadians are spending more money at night across the board, however, than they did during the height of lockdowns; Montreal alone saw an increase of 96 per cent in activity between 2021 and 2022, but much of this can be attributed to Quebec's harsh restrictions during that time period.

"Despite the shift in consumers staying out and spending money later at night, the post-pandemic economy is unique, and businesses are facing new challenges, including soaring inflation and rising interest rates," reads the Square release, attributing the information to Research and Data Lead Ara Kharazian.

"The success of bars, restaurants and cafes will depend upon their ability to respond, whether that means adjusting their offerings or adopting technologies to make their staff more efficient."

As for when we were spending all of that cash, Square's data shows that warm weather definitely contributes to the night economy; spending in Toronto spiked in June this year, while the other two Canadian cities studied saw the most money spent at night in July and August.