As a global mosaic city where all cultures and nationalities live side-by-side, global events are often mirrored right at home in Toronto.

Anyone who consumes media has likely heard about the rising tensions between Russia and Ukraine, and it seems that the threat of hostilities in Eastern Europe is contributing to conflict here in Canada.

Future Bakery, a European bakery with branches around Ontario, has become a battleground in this political clash after company president Borys Wrzesnewskyj installed a banner voicing support for Ukrainian independence and condemning the rumoured imminent invasion of the now-democratic former Soviet republic.

That banner placed on the exterior of Future Bakery's factory outlet store in Etobicoke, reading "#StandWithUkraine" and "#StopPutinNow" was the opening salvo in this war of words, and the only one fired legally.

But a photo emerged on Tuesday showing that the banner and the store's detailed mural had been vandalized with black spray paint messages, the culprit making their pro-Putin stance known to the bakery. 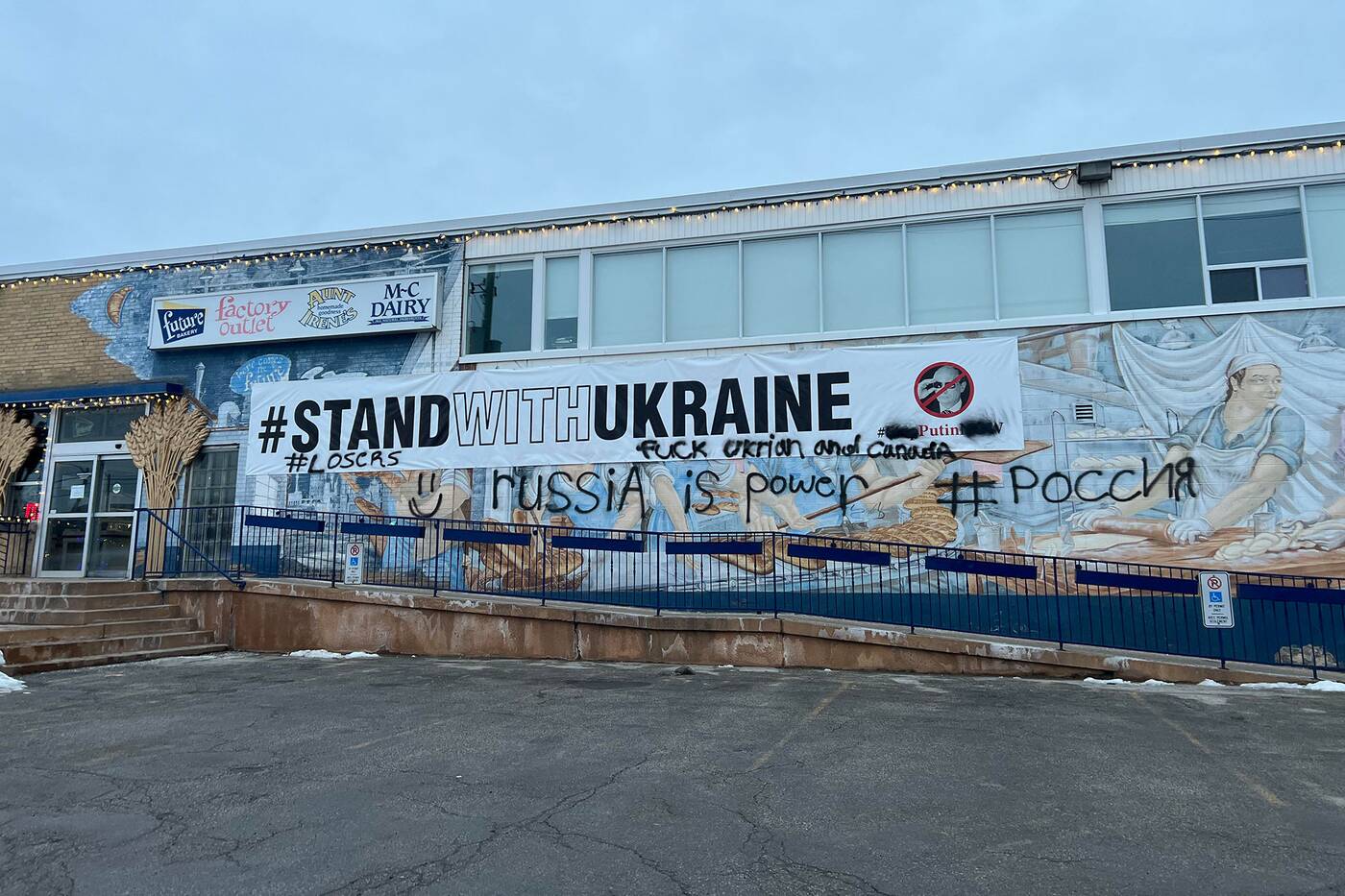 View of the vandalized banner and mural at Future Bakery's factory outlet store in Etobicoke.

Borys Wrzesnewskyj, President at Future Bakery, tells blogTO, "we put the banner up last week on Tuesday. I received a call around 5:45 a.m. today when we had one of our delivery trucks notice the graffiti."

The vandal, who seems to have a tenuous grasp on spelling and grammar, added their own narrative, with crudely-painted messages like "#Losers," "russia is power," and "f*** ukrian [sic] and canada," the latter completely butchered despite having the exact word spelled out directly above. The anti-Putin hashtag was also scrubbed to just read "Putin."

"A lot of people are very concerned," says Wrzesnewskyj, who has Ukrainian, Russian, and Polish roots. "Europe could be on the cusp of the biggest conflict since World War Two," he continued, making it clear that his stance is anti-war and not directed against the Russian people.

"We have people of all backgrounds come that to our store. That's what our city is. Because we have a lot of central and eastern European food, there are a lot of Russian Canadians who come here," notes Wrzesnewskyj.

In conversation with these customers, he has learned that the majority of them don't support Putin's warlike posturing, "but unfortunately, there is a minority out there, and it's disturbing. The graffiti is meant to intimidate."