Putting food on the table will be more of a challenge for many Canadian families in 2022, according to a new report, as prices continue to skyrocket at restaurants and grocery stores alike.

The 12th edition of Canada's Food Price Report, released today, predicts that an "average Canadian family" consisting of two adults and two children will pay roughly $14,767 for groceries alone next year — nearly $1,000 over what they spent in 2021.

This represents a year-over-year increase of roughly seven per cent, and the largest jump in grocery prices ever predicted by the widely-respected annual Food Price Report. 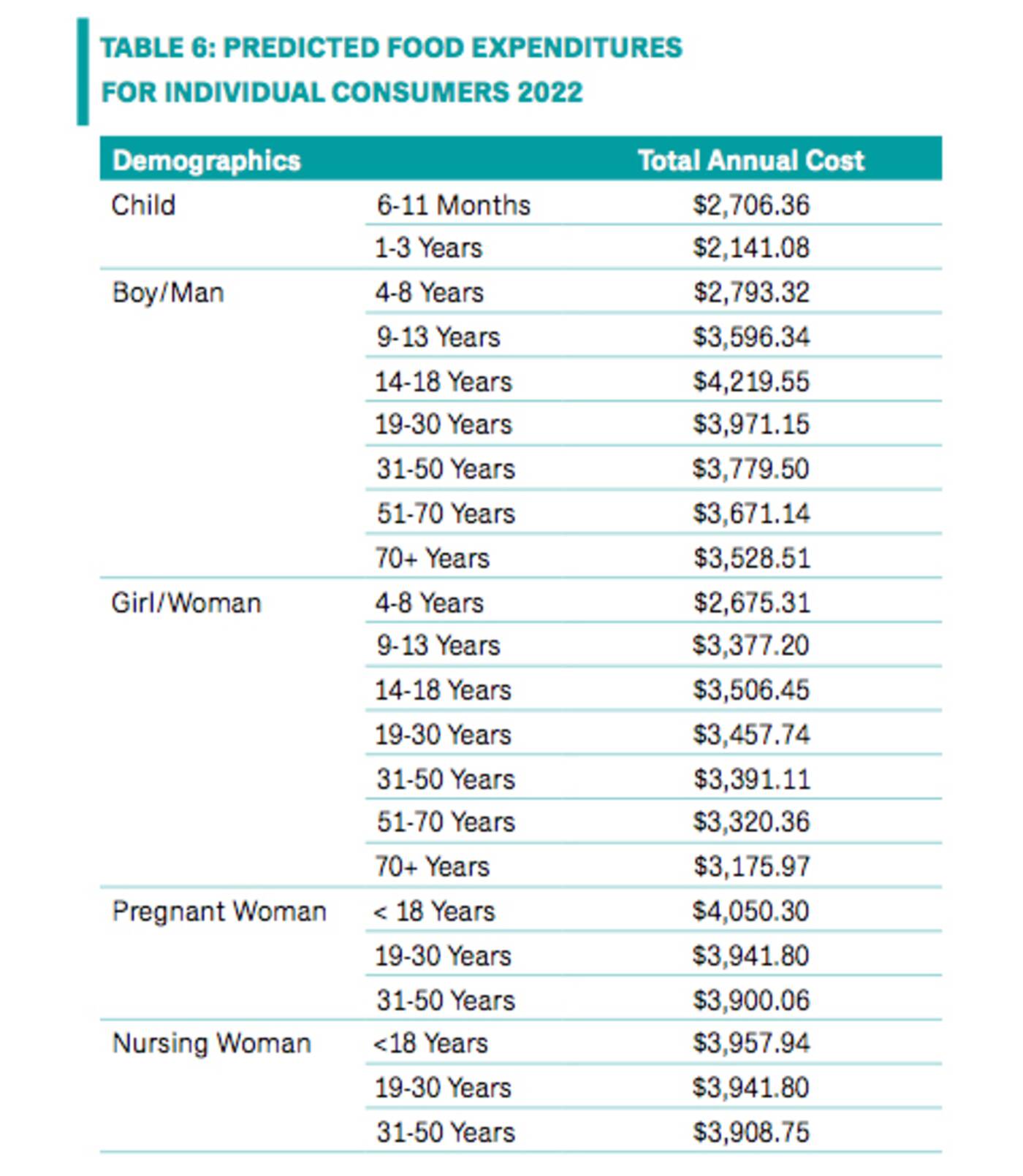 Not all Canadians eat the same amount of food in the same quantities. Here's roughly how much researchers predict we'll spend on an individual basis based on our demographics in 2022. Image via Canada's Food Price Report.

And then, of course, there's the undeniable impact of the COVID-19 pandemic.

"In 2021, Canada's food supply chain experienced logistical disruptions due to the ongoing COVID-19 pandemic, as public health– mandated lockdowns and stay-at-home orders continued during the third and fourth waves of the virus," the report explains.

"In 2022, we expect to feel the continued effect of COVID-19, but to what extent is still uncertain as many Canadians are now fully vaccinated, and we are gradually regaining a sense of normalcy."

Whether we reach the long-promised "new normal" or not next year, food security is predicted to remain a significant issue in Canada thanks to rising prices and general inflation (which reached an 18-year high in 2021 at an increase of 4.4 per cent.)

Incomes simply aren't growing fast enough to keep up with the rising costs of housing, oil and other essentials, let alone more expensive food — and food prices have been among the worst when it comes to inflation over the past 20 years. 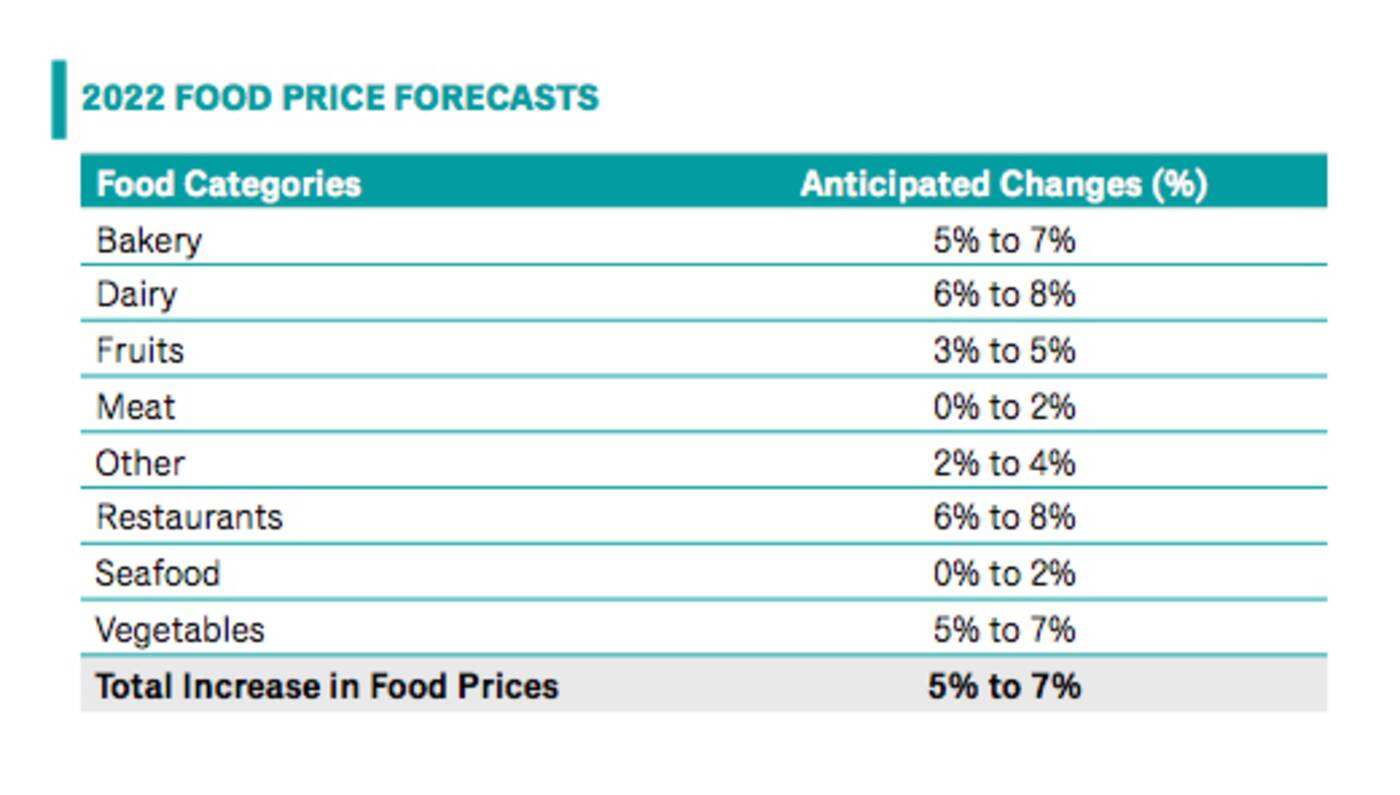 Daily prices are forecast to rise by the highest percentage across the country in 2022. Image via Canada's Food Price Report.

"A typical grocery bill rose by 70 per cent between 2000 and 2020. Historically, Canada has ranked among the few countries that consumers spend less than 10 per cent of their income on food," reads the Food Price Report.

"However, maintaining this allocation proportion may become more difficult for Canadians as data show that while median income in Canada grew by 6.6 per cent between 2015 and 2019, the national average food expenditure (including both food retail and food service) increased by 16.3 per cent, with food retail on its own increasing by 19 per cent."

In other words, more Canadians will be forced to allocate higher proportions of their incomes toward food, with lower-income households hit the hardest.

"Disproportionately higher food prices will have a more severe impact on women, Indigenous populations, people of colour and other vulnerable populations," say the researchers, noting that this phenomenon is only growing more pronounced. 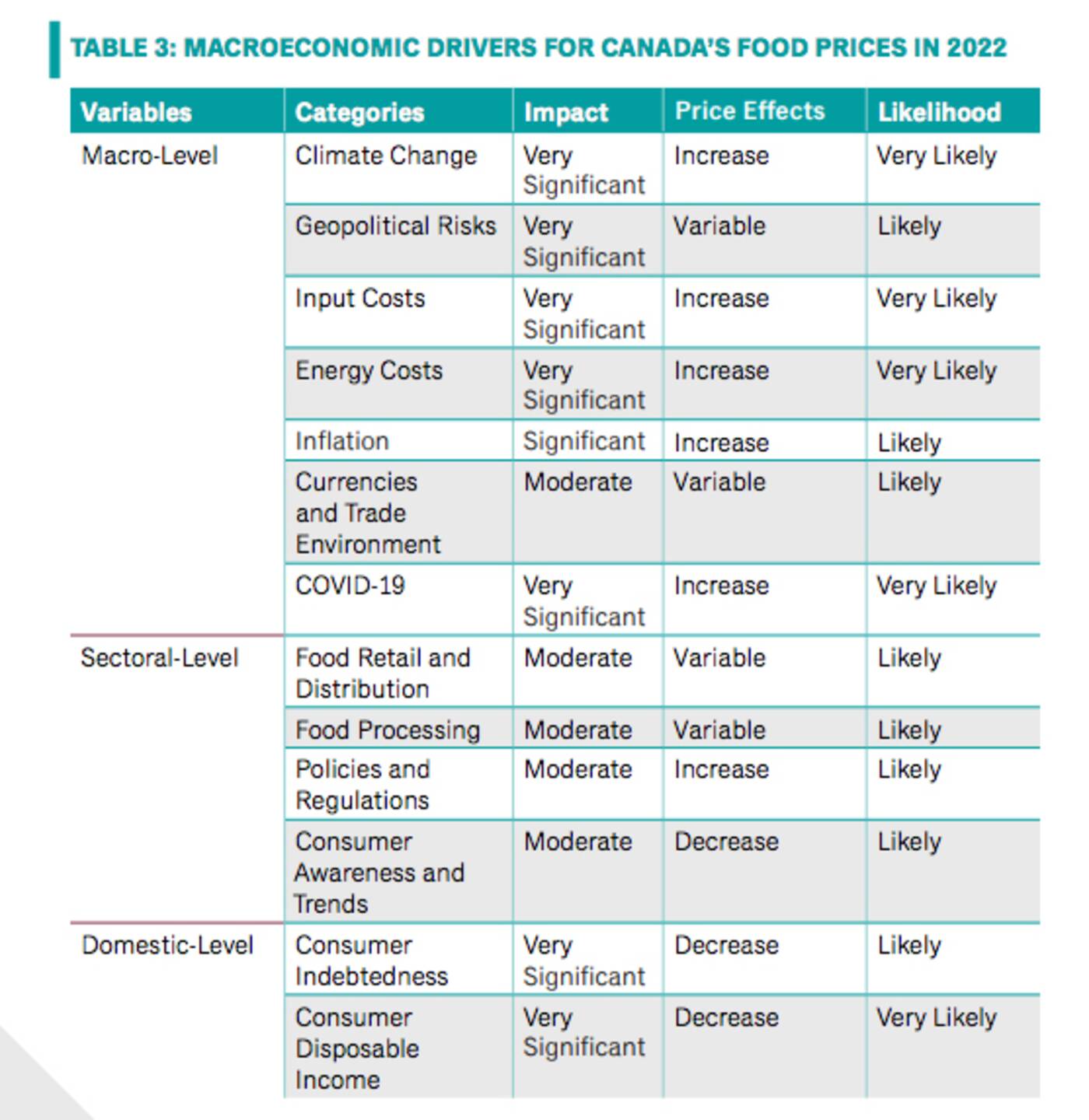 Climate change, energy costs and COVID-19 have all been deemed "very likely" to cause "significant" price increases throughout 2022. Image via Canada's Food Price Report.

So what does this all mean for consumers and society at large?

Experts are already seeing a shift in the types of food people buy due to rising prices: Meat, for instance, is becoming less popular thanks to something researchers describe as "meatflation" — a disproportionate uptick in meat price.

"Almost half of surveyed Canadians have changed their meat purchasing habits because of observed price increases, while 73.5 per cent had noticed a phenomenon called 'shrinkflation' in which food is sold in smaller quantities but for the same or a higher price," states the report.

Without enough of their own resources to live, consumers may also start needing more help from the government and corporations.

"Food programs may face increased demand along with higher costs for food, and food retailers may see increased rates of theft," reads the 2022 Food Price Report. "We will continue to feel the growing impact of climate change and the continued effect of both transportation and labour market challenges."