A hidden back patio with a fountain and an aesthetic of "liminal iconography" has just opened up in Toronto, and it'll make you feel like you're the main character in an old Hollywood movie.

Octopus Garden operating partner Cameron Wilson was inspired over lockdown to think of the three places he wanted to be most other than his apartment in Toronto in the middle of winter, and came up with Parisian park Place des Vosges, Polo Lounge and Chateau Marmont. 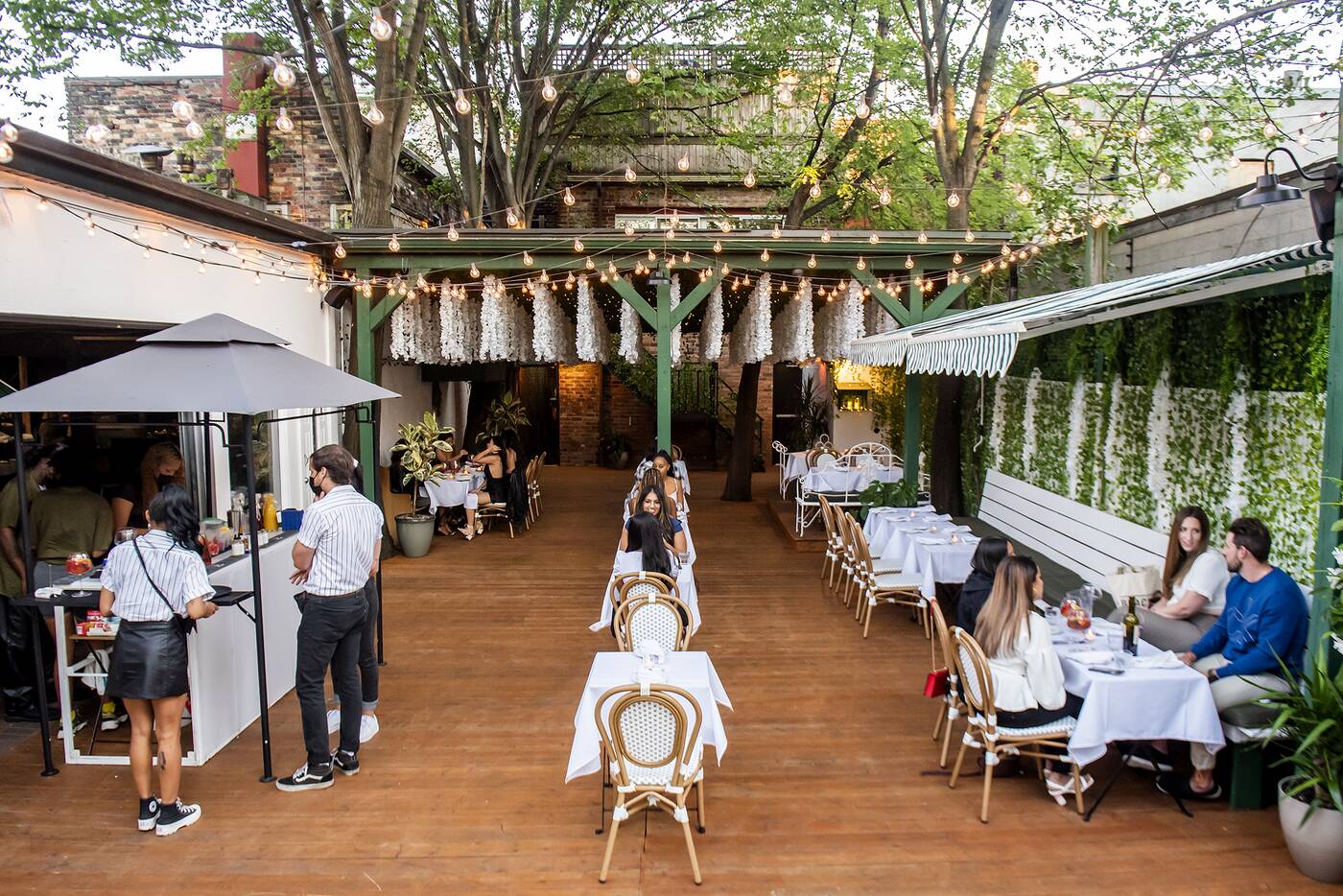 These places provided the inspiration for the back patio area, the VIP area with a fountain specifically inspired by Place des Vosges. 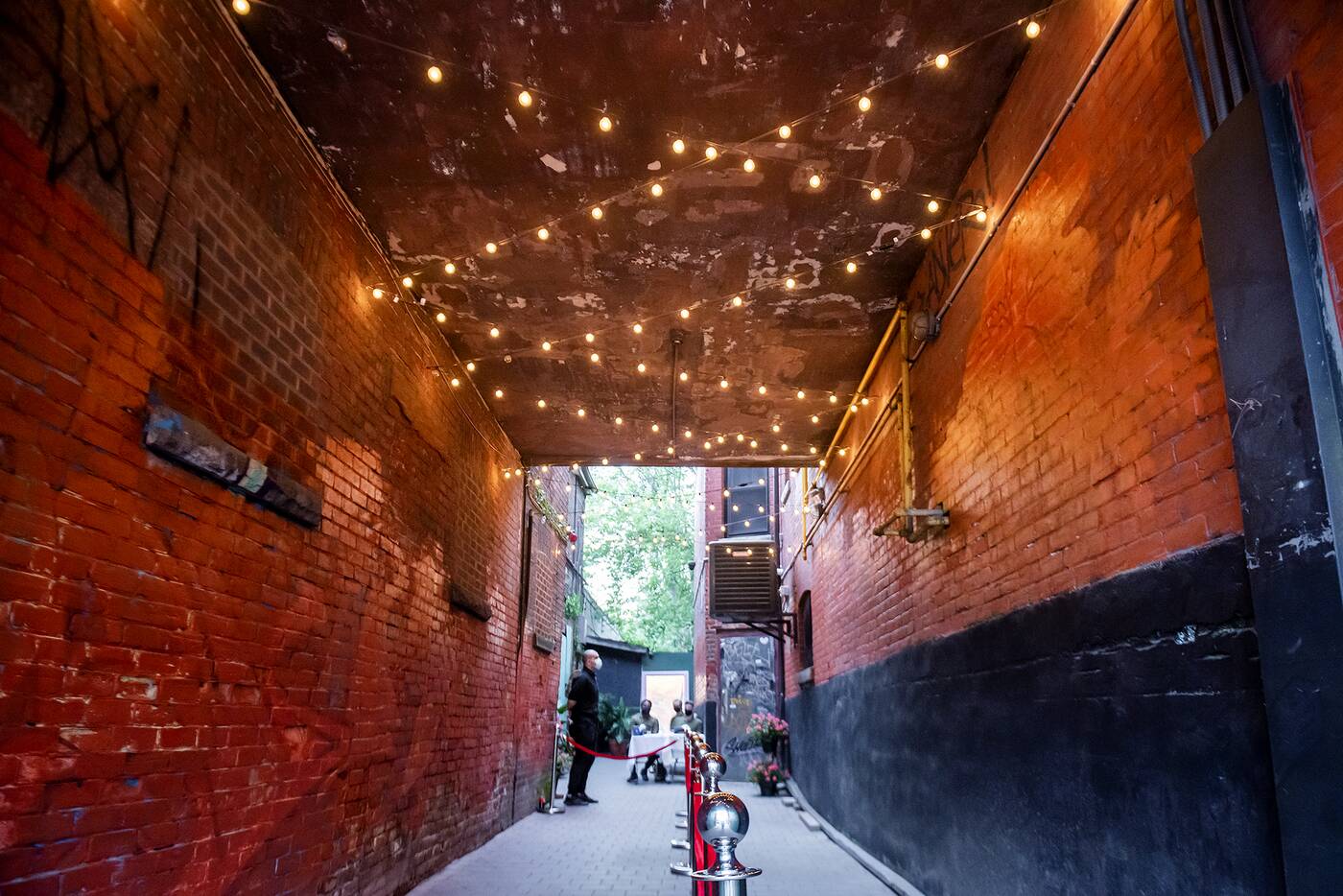 "What will people need when the world reopens?" Wilson tells blogTO he asked himself. "Not something that aleady exists." 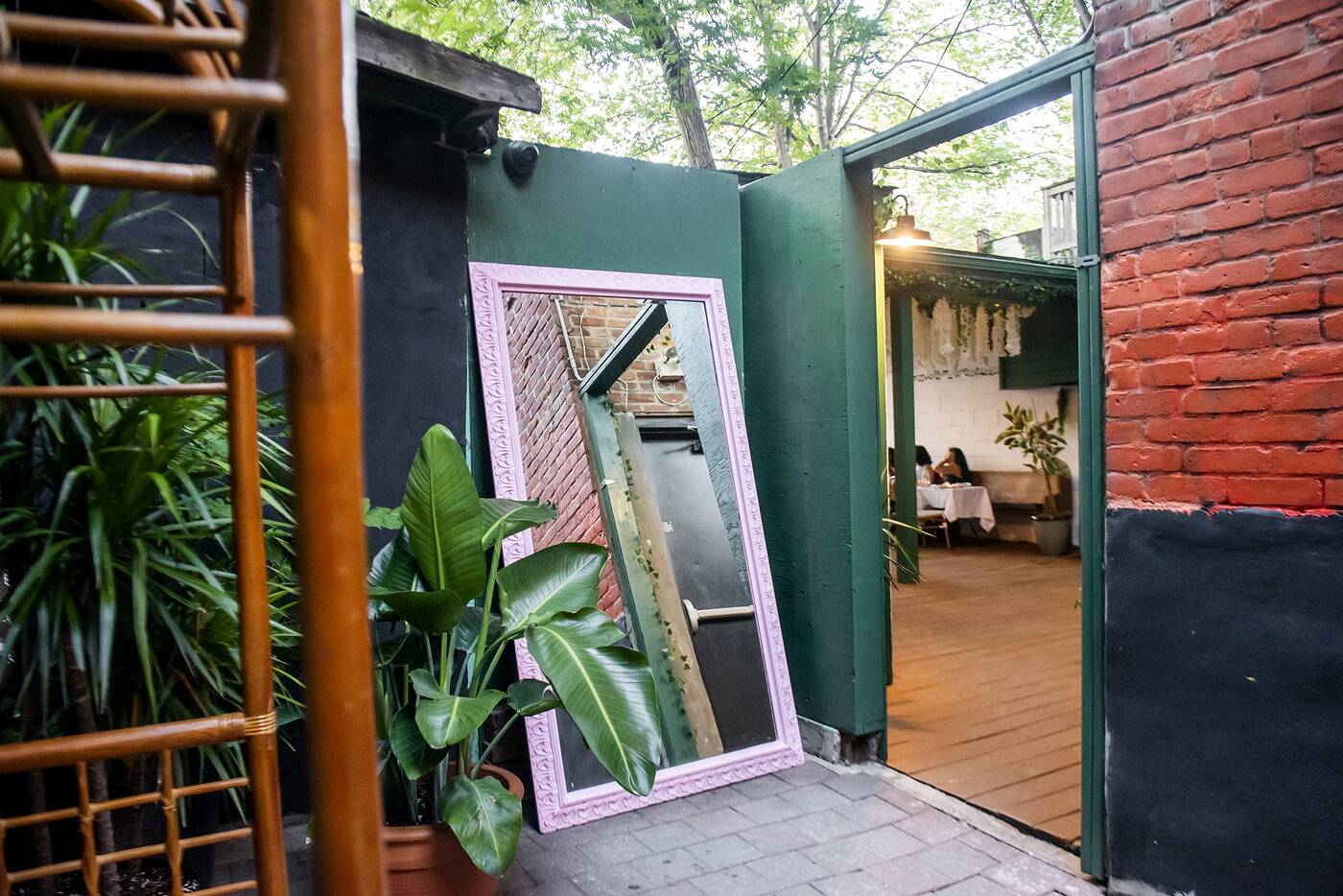 Soft opened since July 14, the space that was once the back patio for the Cadillac Lounge is now dripping in garlands of white flowers and green vines and seats about 120 distanced. 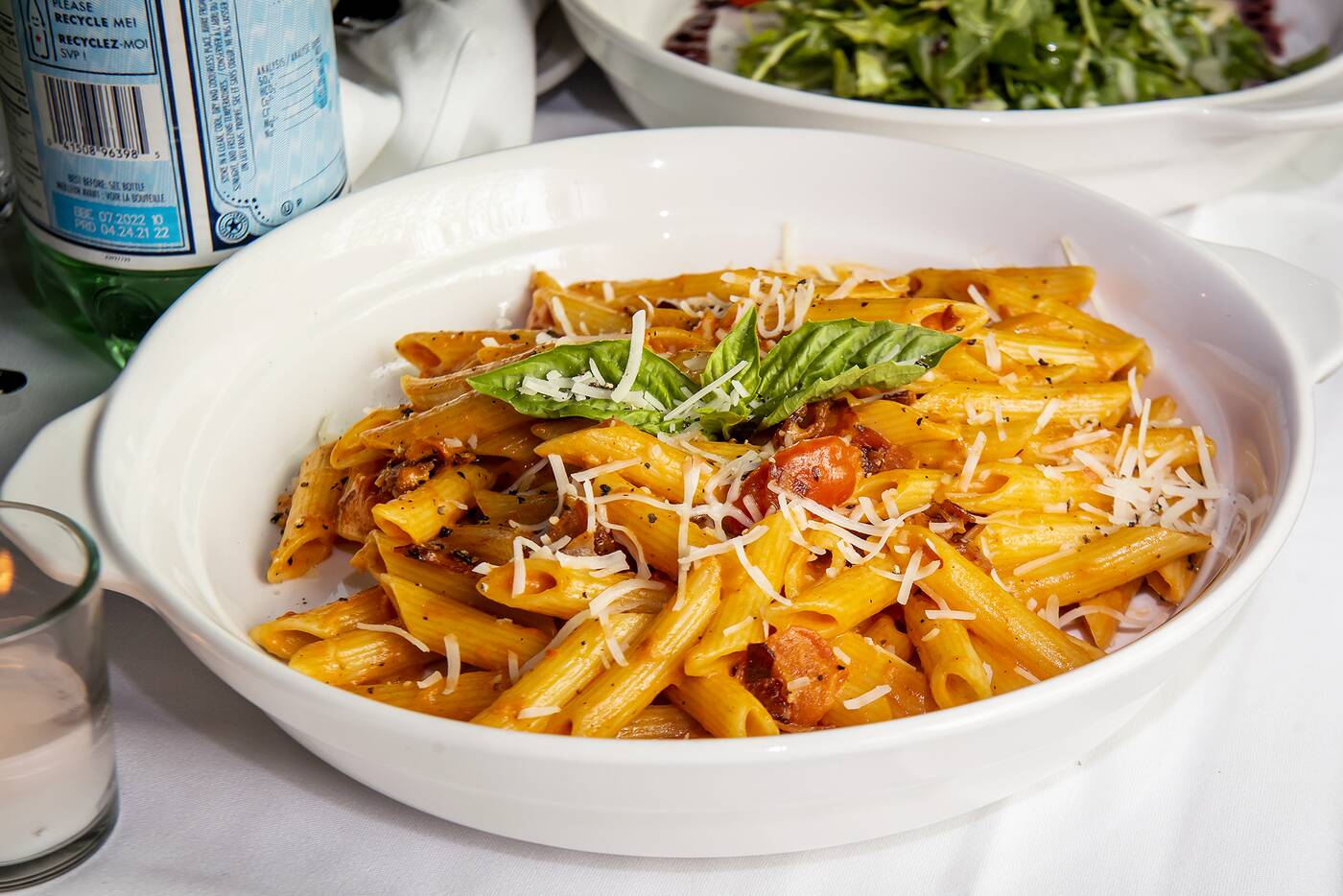 Wilson also says Octopus Garden is "more than just a restaurant" and "meant to be experiential." 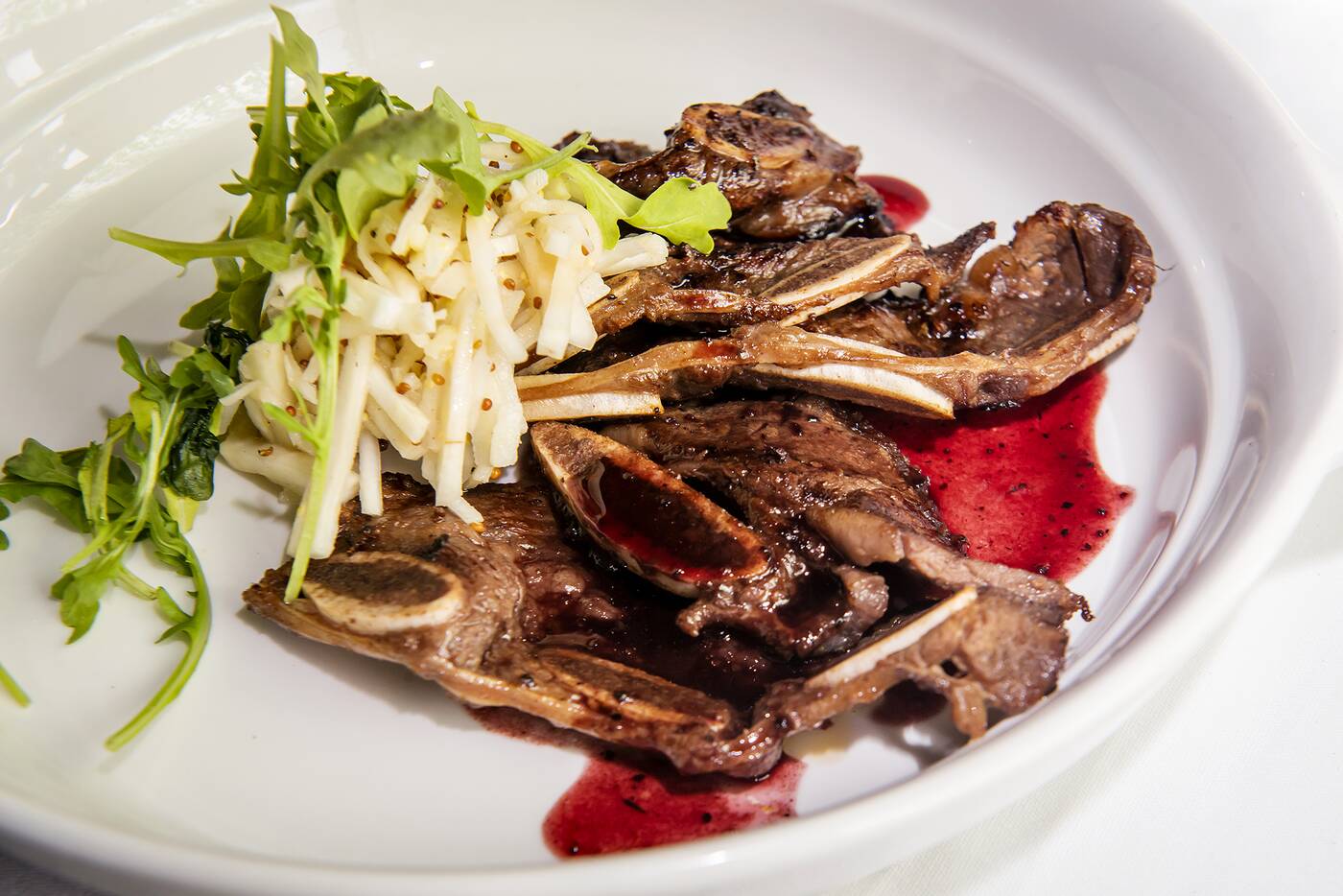 A bistro menu consists of continental/American contemporary eats, and of course there are cocktails served in ballooning goblets. 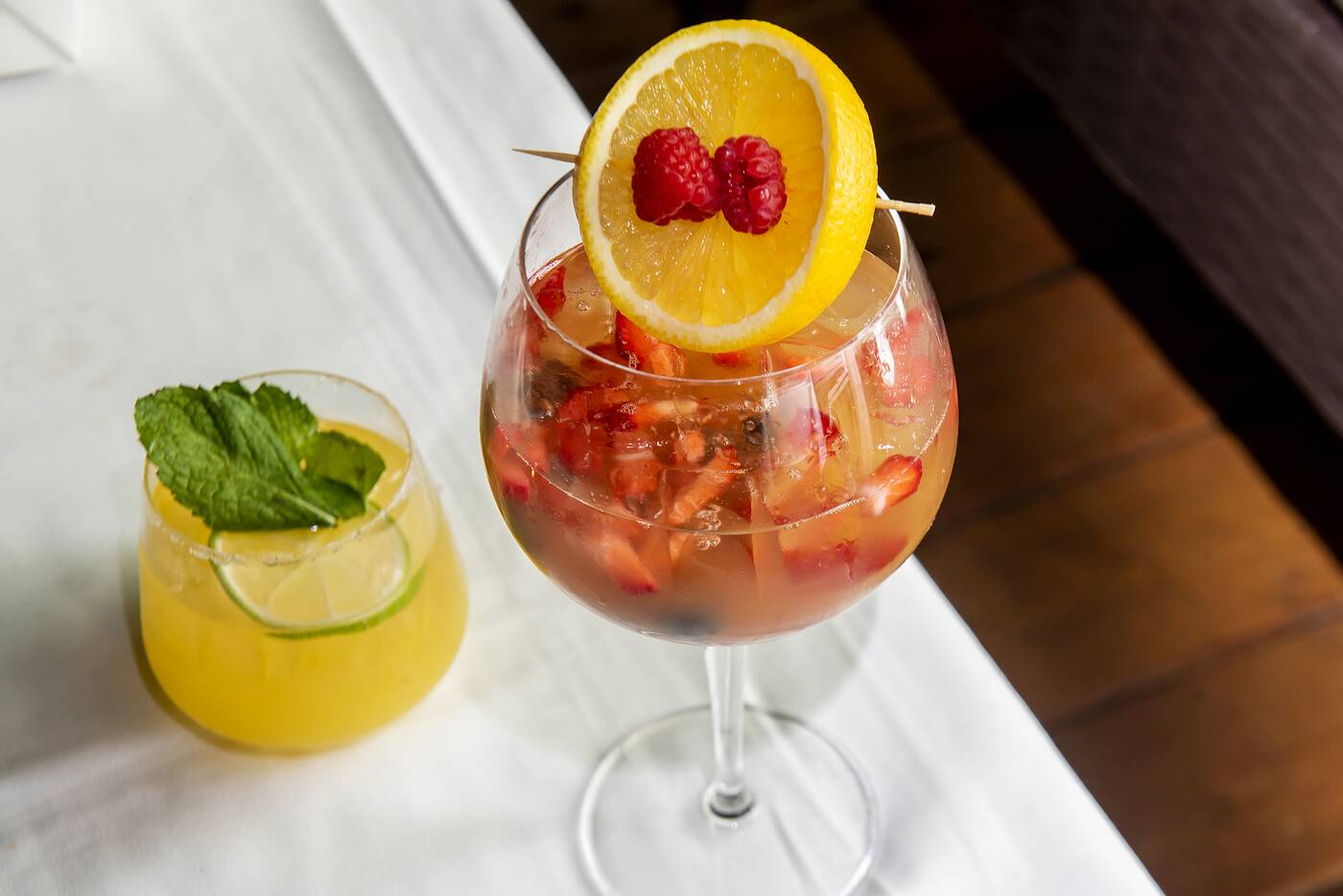 Last summer the space temporarily operated as The Caddi, which was on a six-month lease. Wilson actually wanted it last summer and put an offer in, but had to wait to take it over until their lease was up.

Wilson is known for operating clothing brand Untitled & Co. for eight years, but what many people might not know is that his background is in hospitality, starting out in 2007 along College working his way up from dishwasher to server at Vivoli. 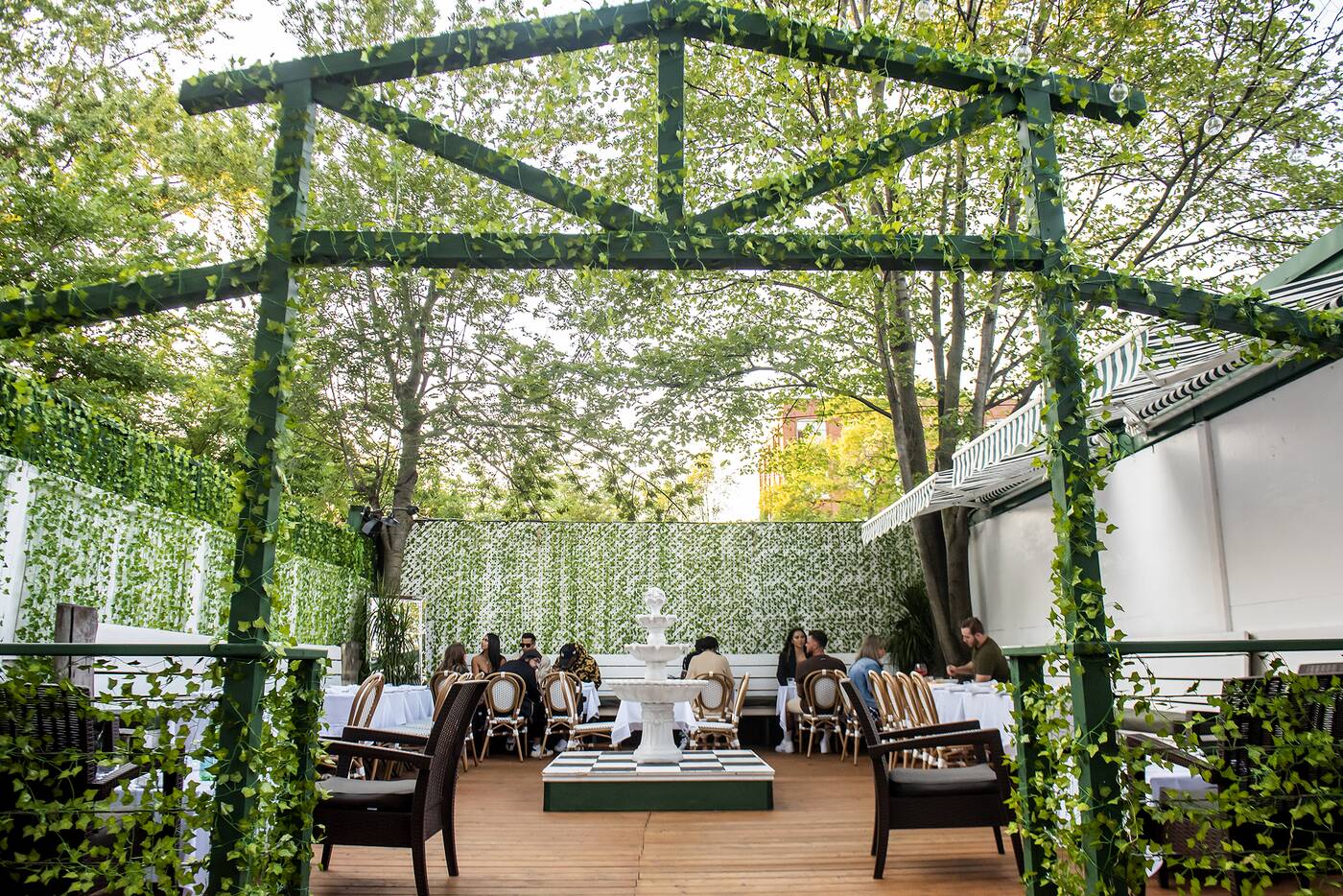 From there he moved on to Nervosa, where he developed a close relationship with Janet Zuccarini, who he considers his first mentor.

He eventually became a design lead with Zuccarini, designing all the tees that function as uniforms for her Gusto restaurants, using the money from that gig to start up Untitled. 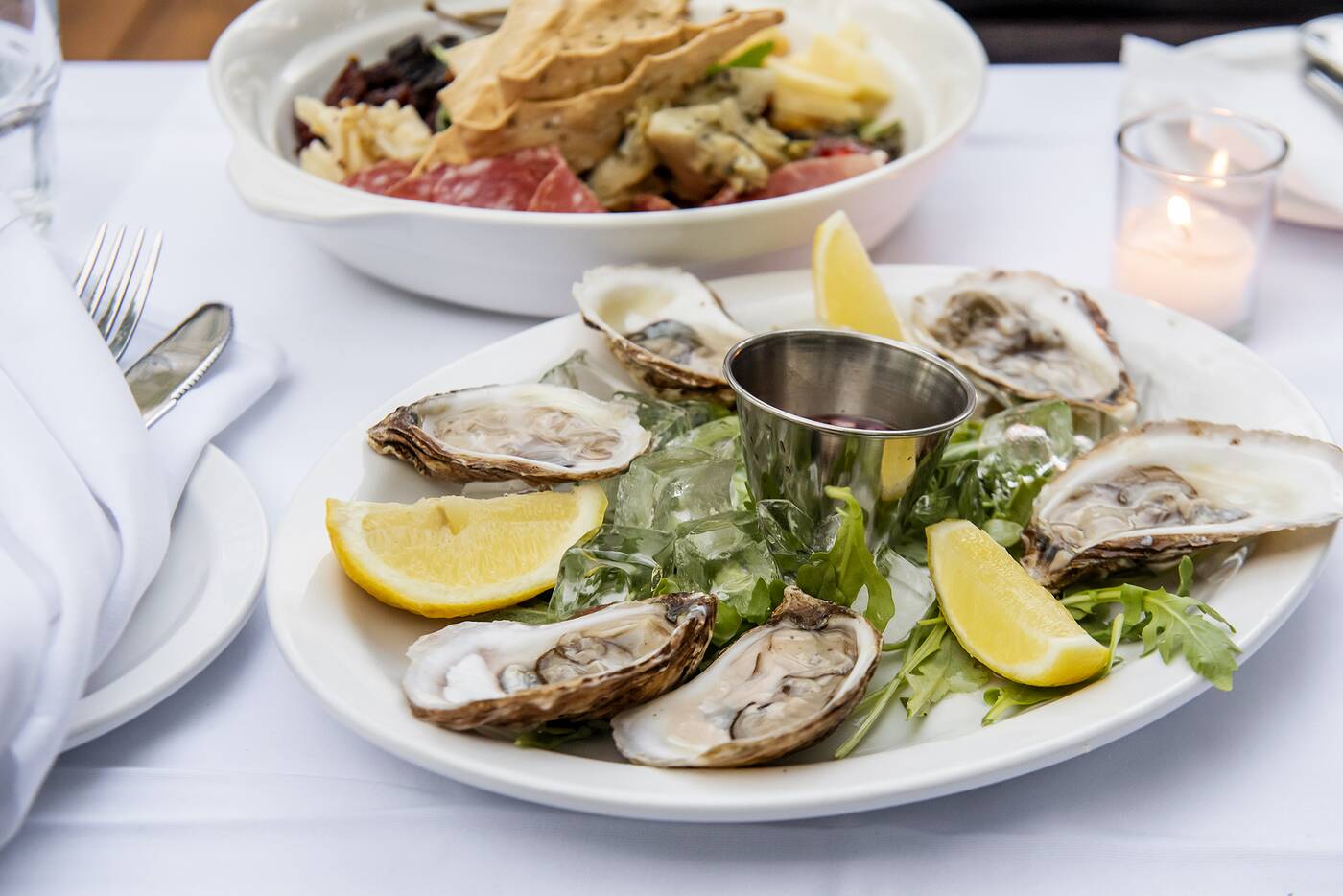 He says he actually flipped a coin when deciding whether to start a design business, and hospitality was always the other option. 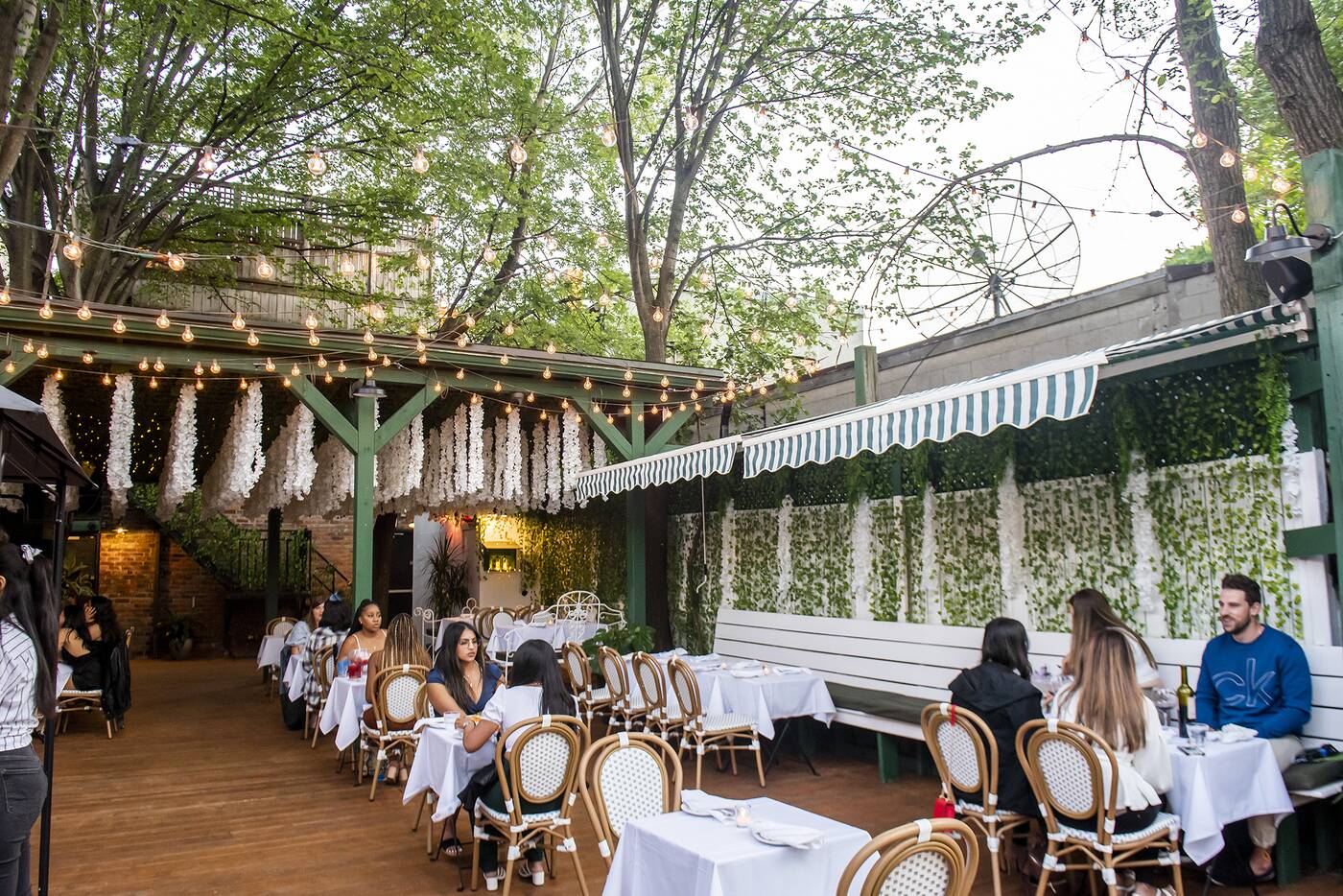 This design background helped influence the look of Octopus Garden, along with all the TikTok Wilson consumed during the pandemic, seeing Gen Z create different "aesthetics" like "utopian scholastic" and "neon ooze surf shack." 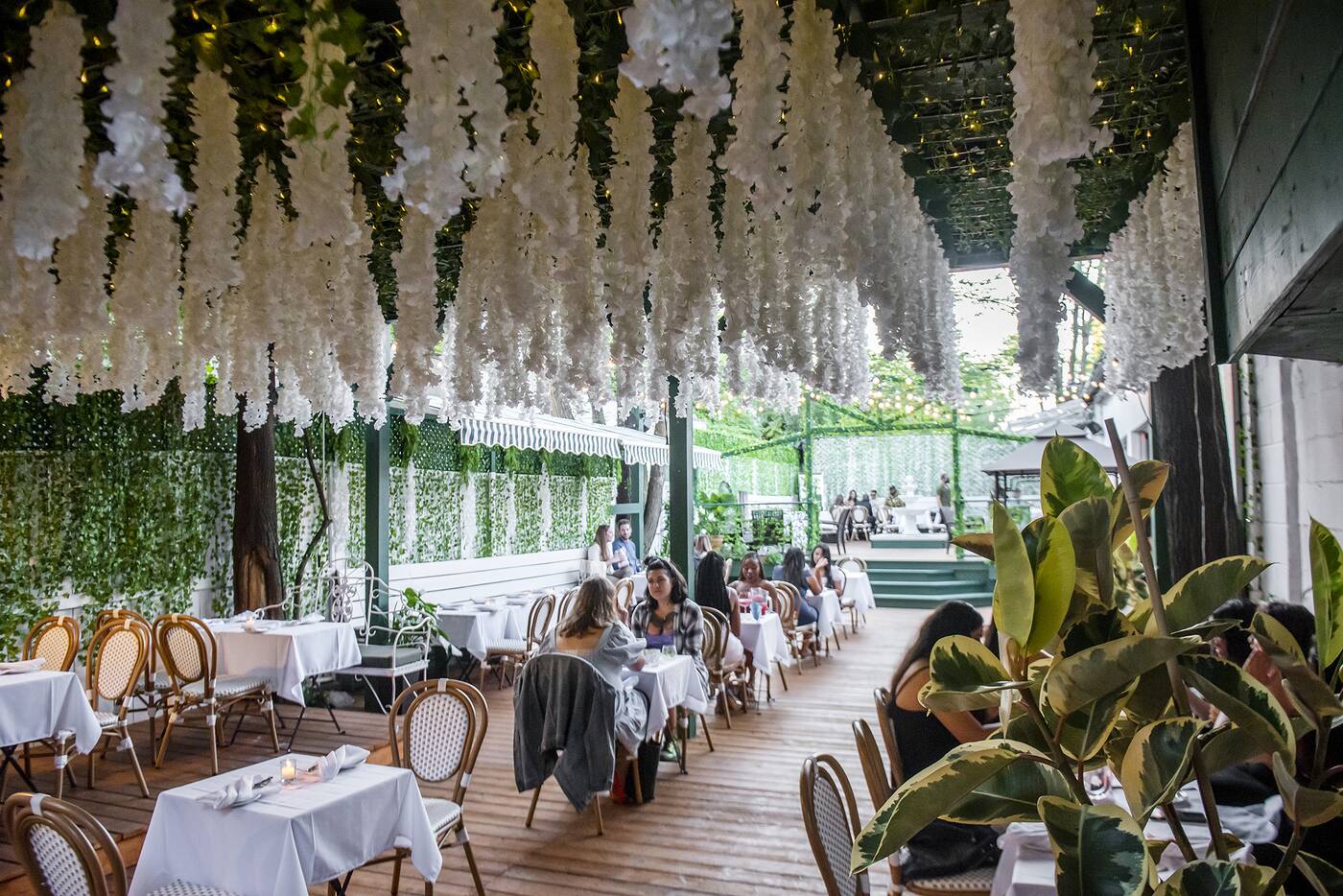 That's when he figured he'd create his own, "liminal iconography," to theme Octopus Garden around. 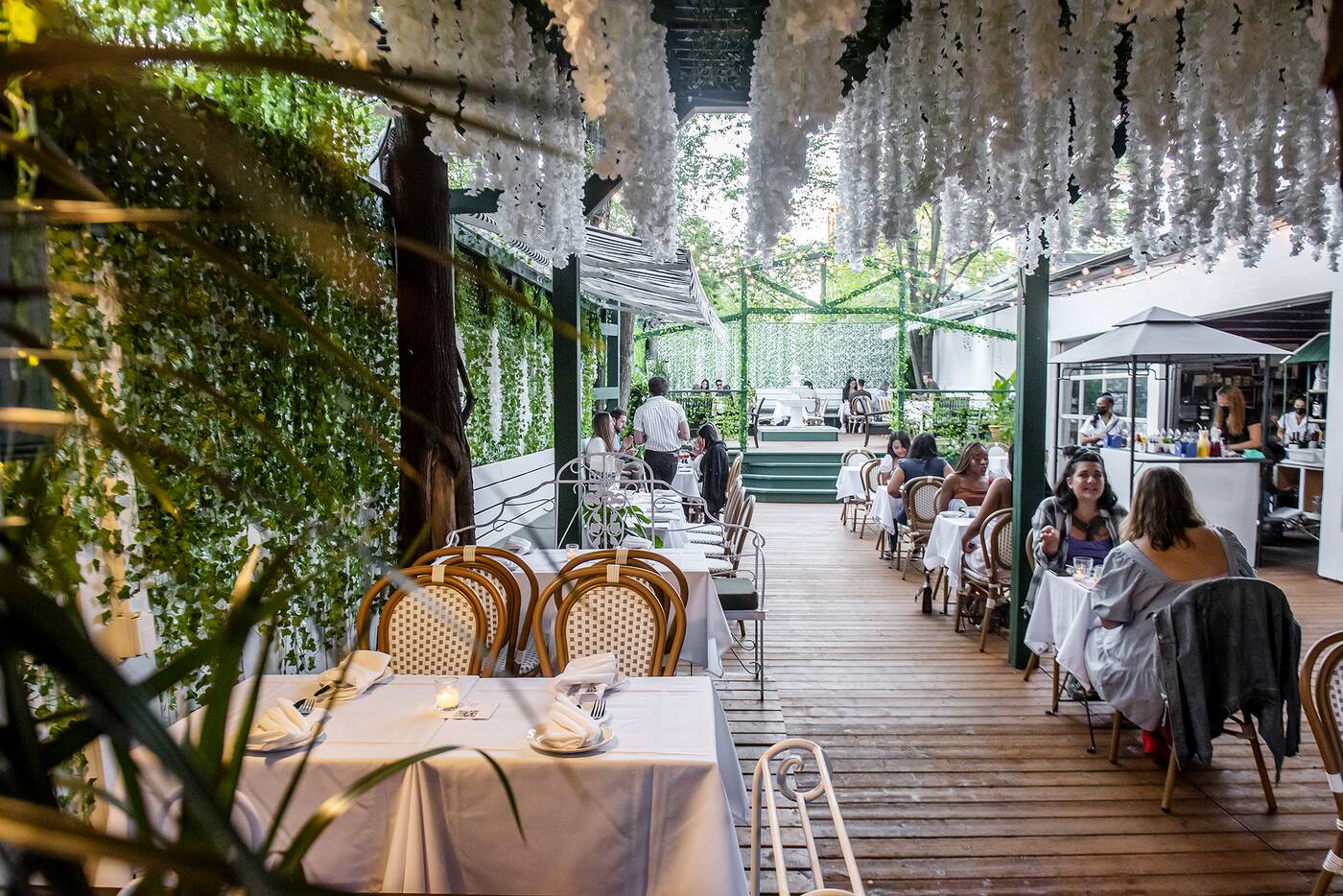 The concept takes inspiration from this for both their decor and menu. An independent artist who actually started as a bartender at the spot is creating 90 illustrations that will decorate the space, and designing an illustrated menu.

There will also be a gift shop component to Octopus Garden where you'll actually be able to get the menu printed on a hoodie, and that's just the beginning of the future plans for this space. 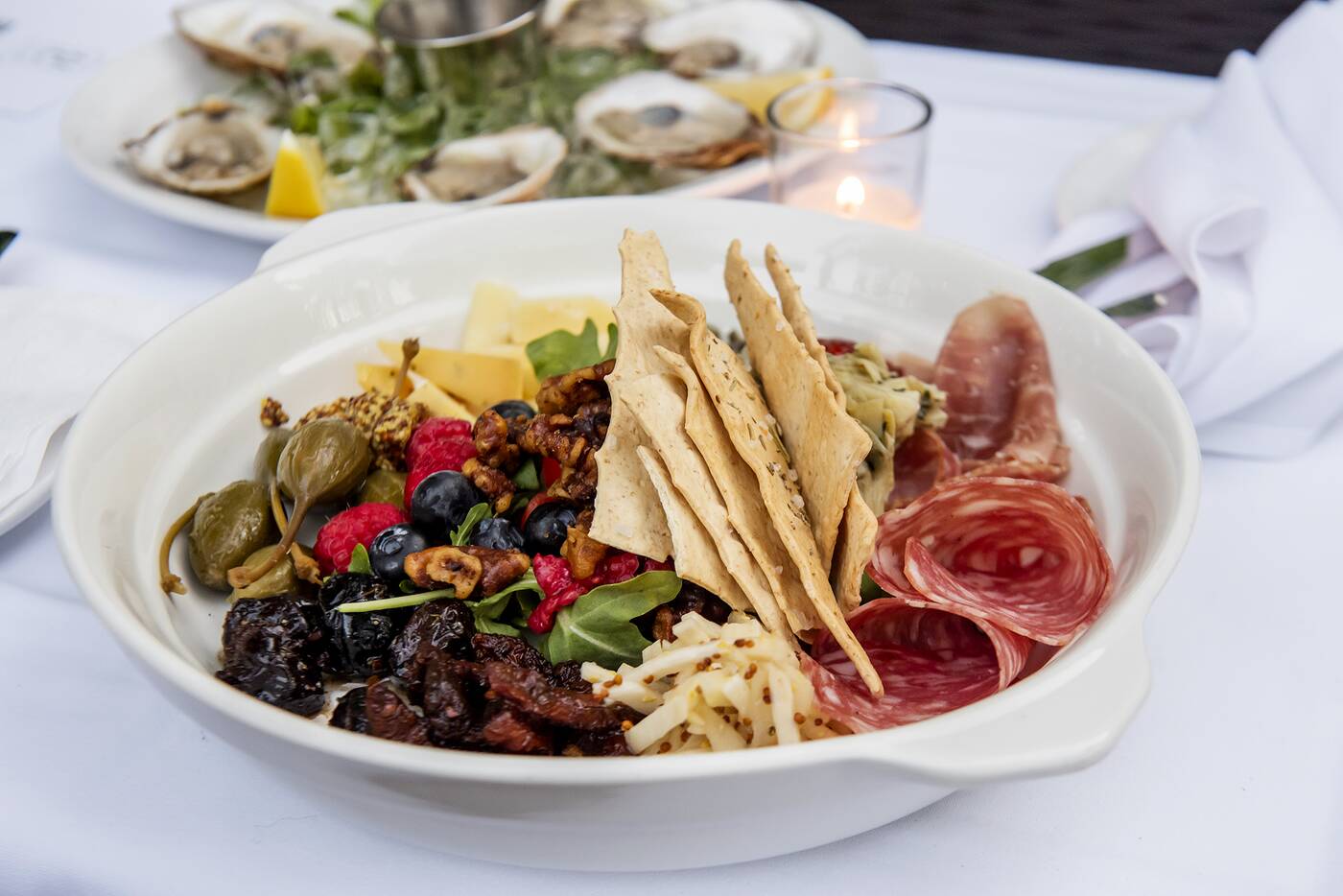 Unlike The Caddi, Octopus Garden isn't going anywhere, and should soon encompass three concepts within the entire 15,000-square-foot space, which renovations haven't started on yet. 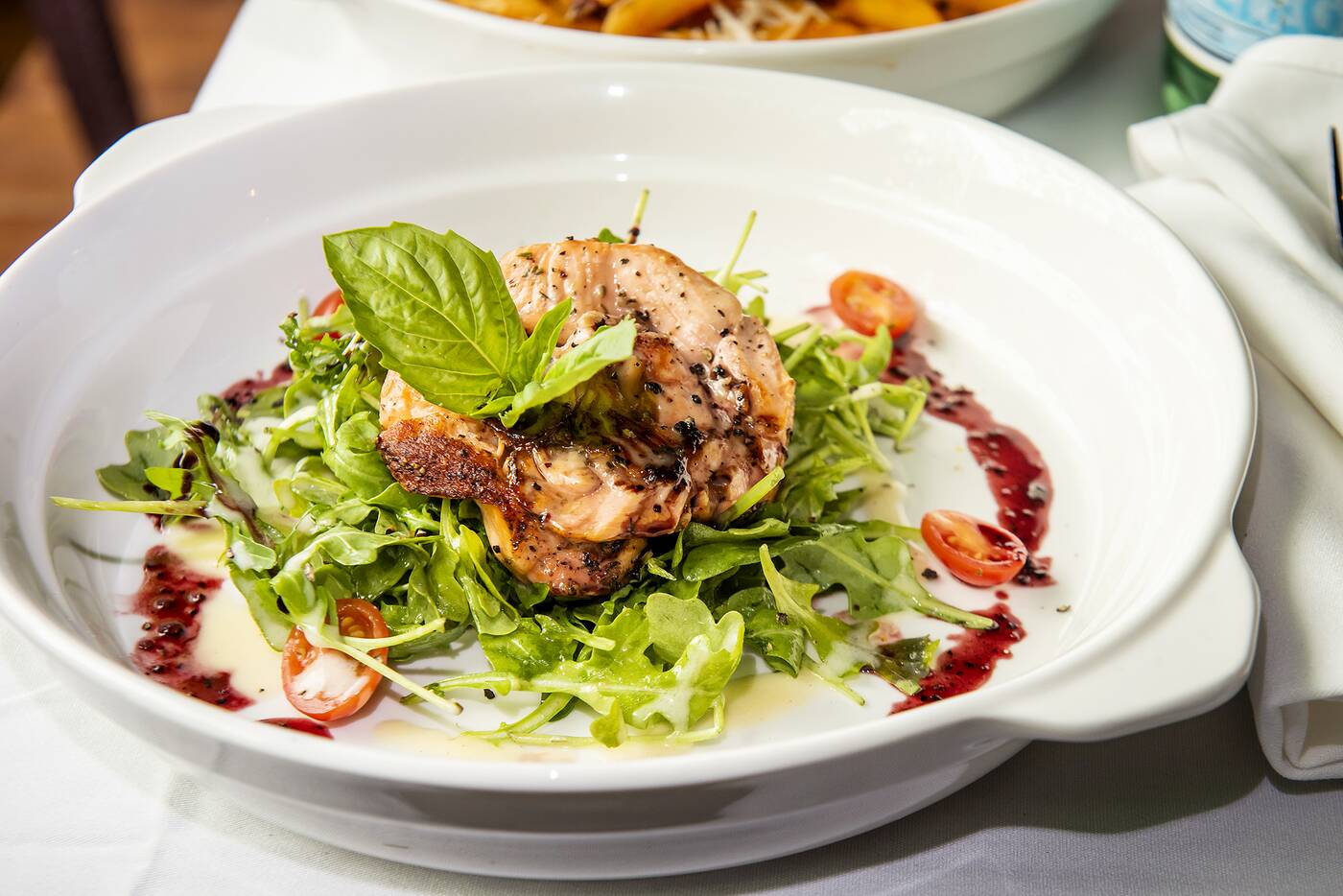 All Wilson will reveal is that there should be an indoor bistro concept, and more of a nightlife concept influenced by Cipriani.

The space will be fully open to the public on Friday, Aug. 13, but until then they're taking limited reservations, walk-ins, and are booking private events, all of which can be arranged through Instagram DM's.

Octopus Garden is at 1300 Queen St. West in Parkdale.