The BTS Meal from McDonald's has, just like previous collaborations between the fast food giant and seemingly random celebrities, become a highly coveted commodity reserved only for those lucky enough to live in one of the cities carrying the limited edition spread — and yes, Toronto is one of those places.

Given the fact that K-pop septet BTS is the most popular band in the world right now, the meal — which is really just a standard 10-piece nugget meal that comes with specialty sauces and different packaging — is highly buzzed about as fans worldwide wait for it to hit their hometowns.

As of May 26, the $13 CAD (on Ubereats) meal has been available in ten countries including Canada and the U.S., with plans for a rollout in dozens more over May and June.

And, of course, people are already listing their wrappers and dips from the meal for sale online, as the purple branding and the cajun and sweet chili condiments are really the only things that make it remotely exceptional. 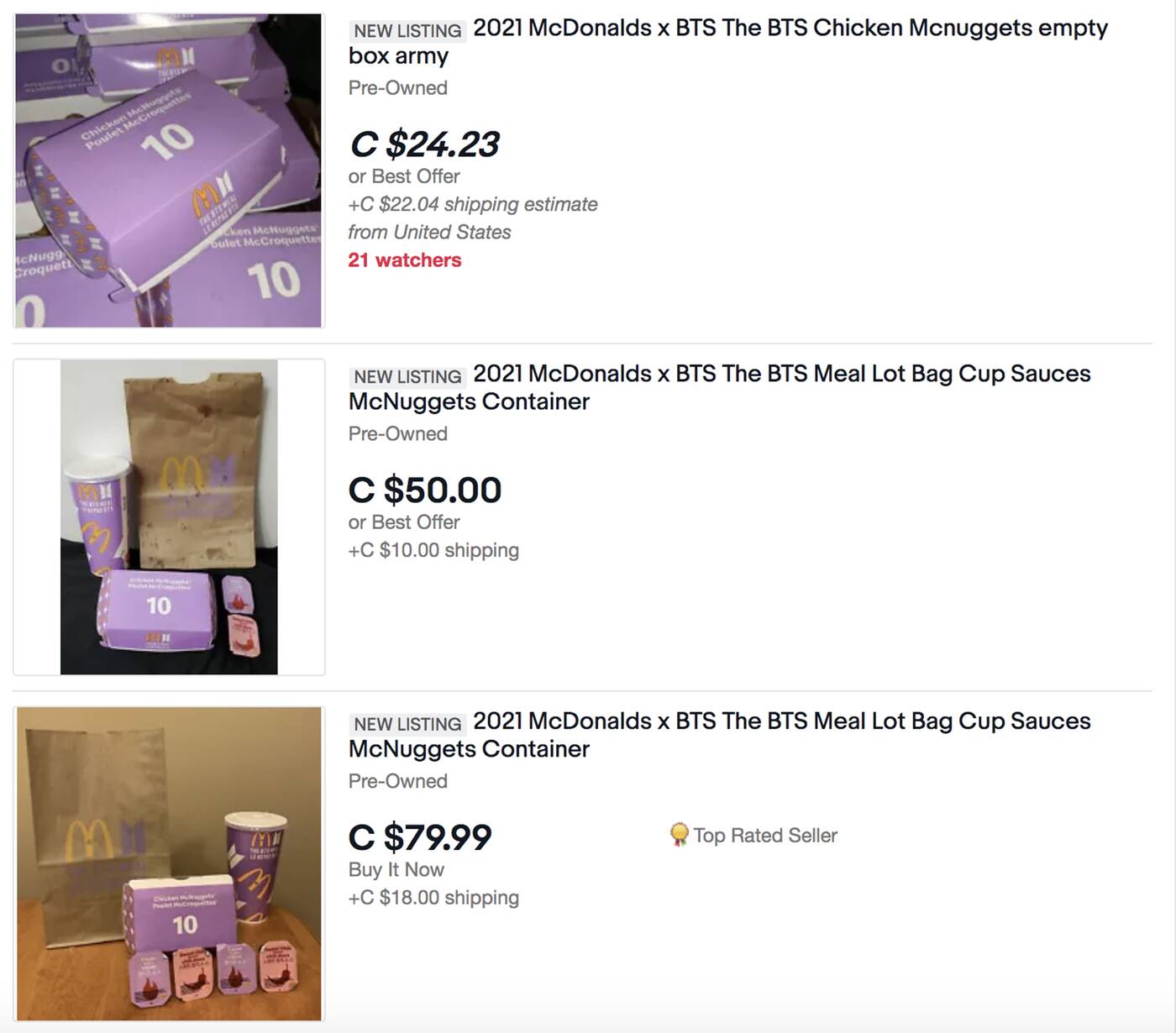 For a cool $50 on eBay.ca, you can get a lovely grease-stained McDonald's bag bearing the lavender BTS logo next to the signature golden arches, along with the limited-edition cup and nugget box (all disposable, obviously) and, perhaps the only useful items in the lot, the two sauces that come with the meal, still unopened.

(This listing is obviously from Canada, as the bag comes complete with the words "THE BTS MEAL LE REPAS BTS" underneath.)

For $30 more, you can get not just the standard two sauces, but FOUR total — a pair of each rare flavour. 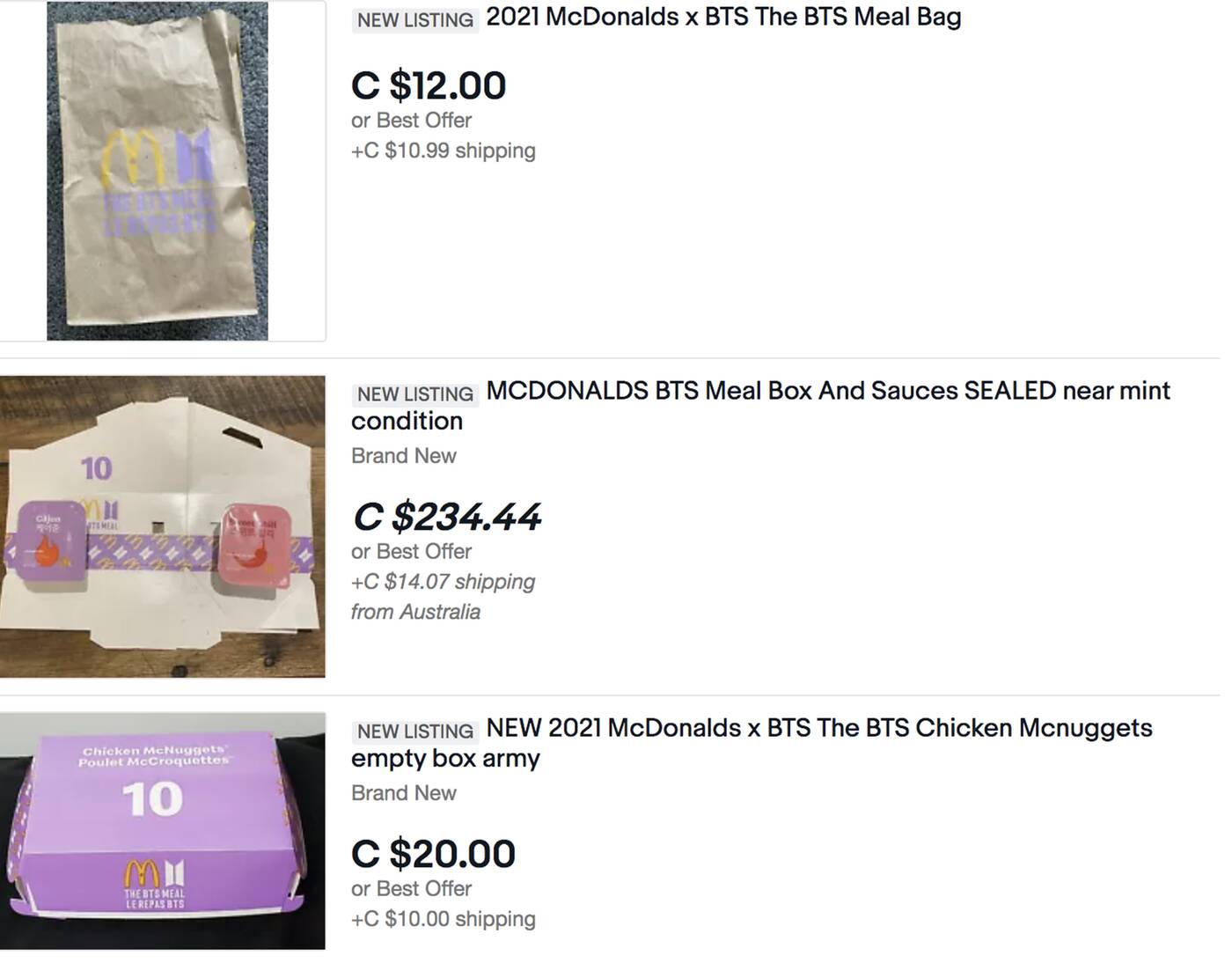 There are also countless listings for individual components of the meal — or, rather, what the meal comes in — such as the brown paper bag or nugget box, all for various prices, all of them ridiculous given that buyers are paying for literal garbage.

But, the BTS fandom or "Army," as they're called, is absolutely massive, extremely organized and also hugely influential, so the resales within a day of the special collab becoming available do make some sense. 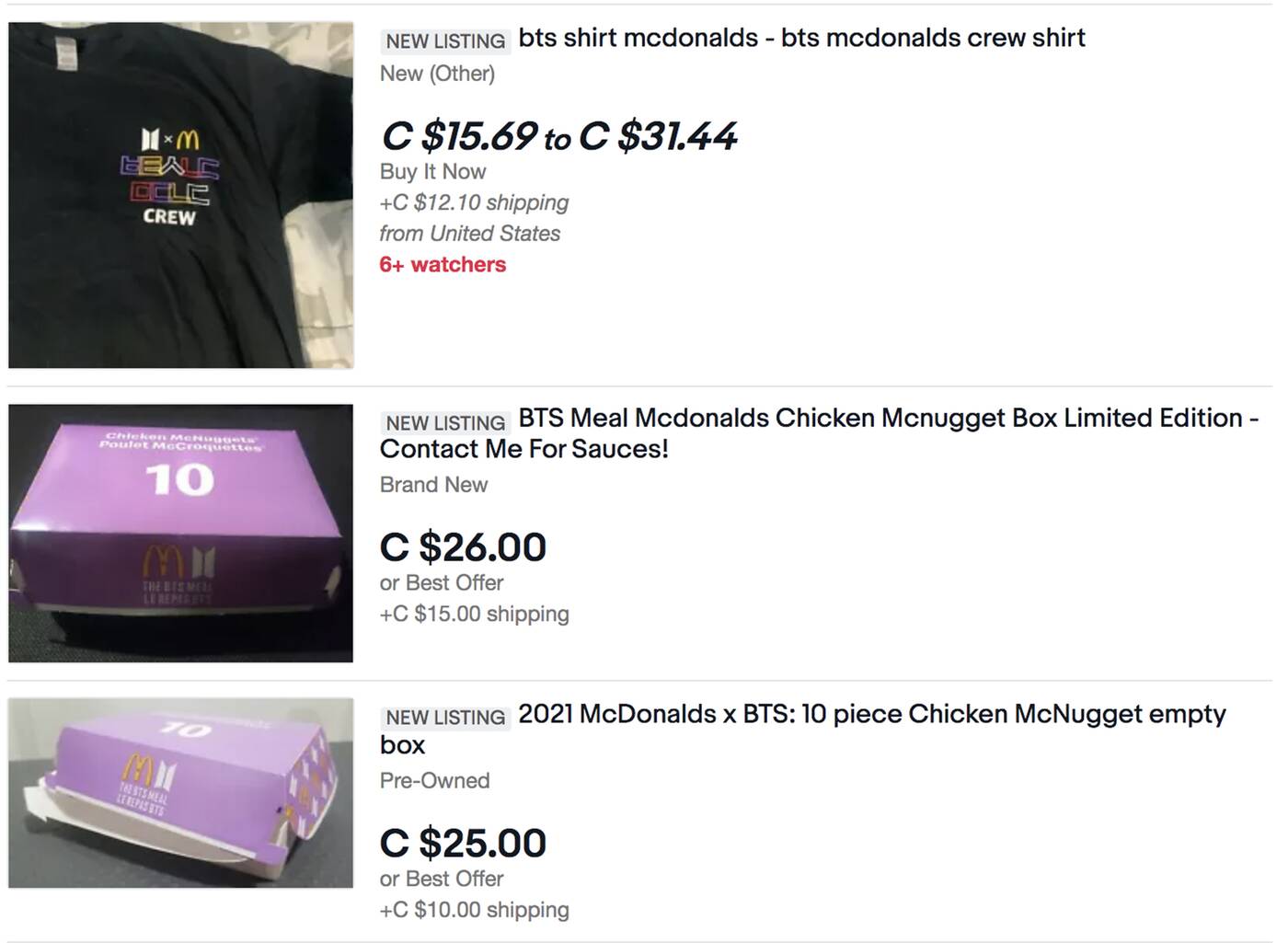 Also up for grabs are a few BTS + McDonald's crew shirts printed on standard Gildan black tees, presumably given to staff.

As part of the whole promotion, there will also be some "never-before-seen digital surprises each week featuring the band" available through the McDonald's app at some point, the company says, as well as the release of special merchandise that is somehow inspired by the McNugget meal.

The partnership follows massively successful ones between McDonald's and artists like J Balvin and Travis Scott last fall.