Cabana Pool Bar may have recently changed its name to the classier, more pandemic-friendly "Cabana Waterfront Patio," but the notorious summer party venue appears be rambunctious as ever.

Video footage is going viral today of some high-rolling Cabana patrons throwing alcohol into Lake Ontario — and I'm not talking about dumping the rest of a drink over a patio railing.

I'm talking full on chucking several very expensive bottles of booze, far out into the Toronto Harbour, for no apparent reason.

As explained by 6ixbuzzTV, which uploaded the clip on Sunday evening, "these guys spent $10k on bottles just to dash some of them in the water."

Members of the group can can also be heard in the background yelling such things as "throw that sh*t away," "everything in the lake!" and "hoes don't deserve that sh*t."

Then, after one man throws what appears to be a half-full bottle of $300 Hennessy VS Cognac into the water, the video cuts to a hand holding a stack of cash, followed by a receipt.

Among the big-ticket items on the bill: Two bottles of Jose Cuervo tequila ($520), two bottles of silver Patron tequila ($680), one bottle of Armand de Brignac's Ace of Spades champagne ($800), the aforementioned bottle of Hennesey and a bottle of glow-in-the-dark Dom Pérignon "luminous" champagne ($775).

"As long as everybody had a good night, we're cool," says someone in response to the bill. 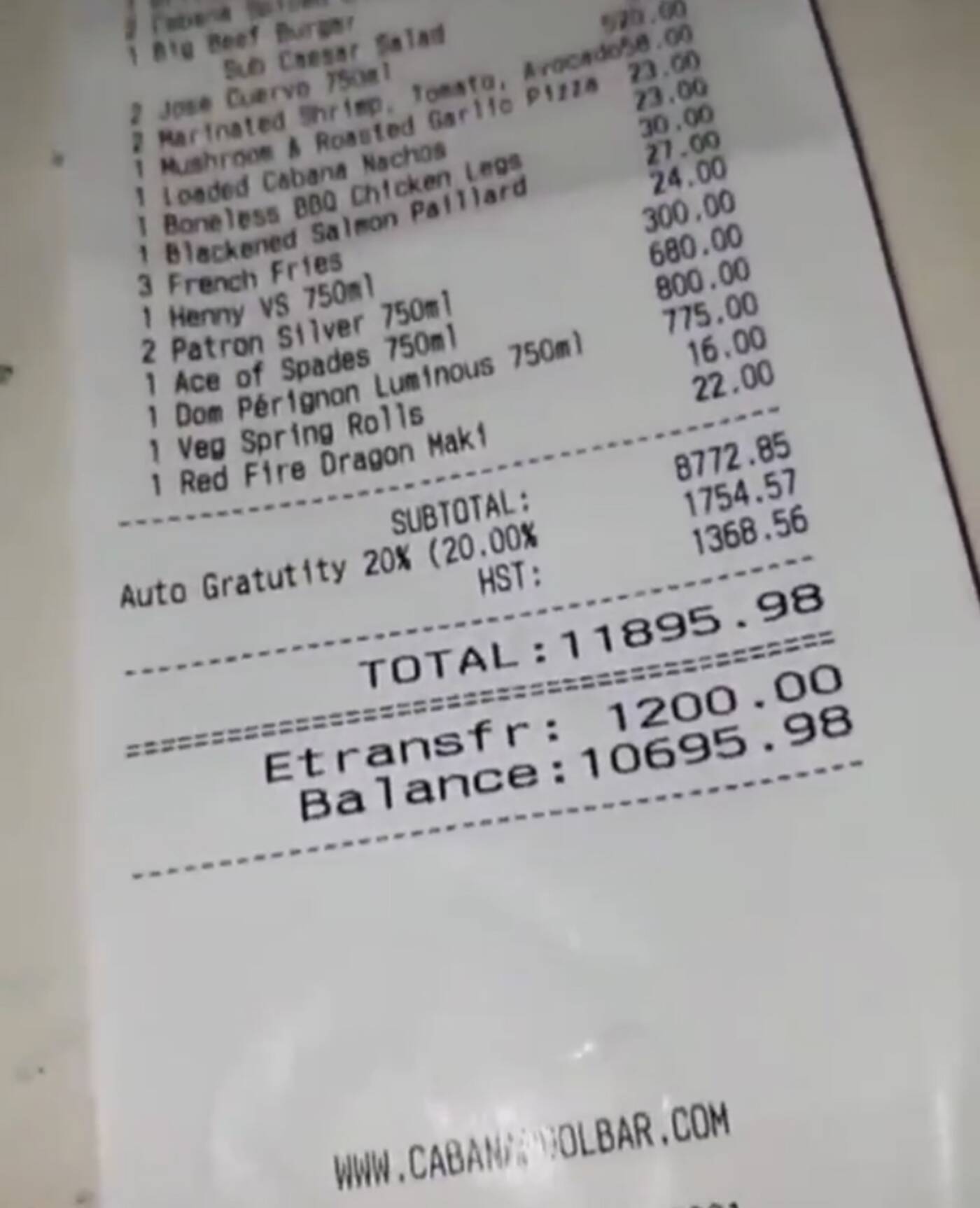 While clear that the stunt was intended as a conspicuous display of wealth, some of the more than 330,000 people who've watched the video on 6ixbuzzTV's Instagram are taking it as an affront to our environment.

"Littering in one of the world's largest fresh water sources ain't a flex," wrote one commenter.

"Pollution. That's nice could have used that money on something better," wrote another. "But no, let's throw it in the lake."

Others are more upset to see money spent on wasted booze that could have been put toward helping Torontonians in need, such as people experiencing poverty and homelessness.

"Fish don't need your alcohol. Should've given that money to a homeless shelter," wrote one person, while another wrote "there goes my tuition for 1 year."

I’m sorry but they clearly stated the reason in the video. If I recall correctly, it was because they had no “hoes”

Police say that if officers had been present, the men could possibly have been charged with mischief, but their actions would be more likely to attract the attention of city bylaw enforcement officers, who could ticket them for littering,

Most people who've seen the video seem to agree that what the guys did was stupid, either way.

"This is everything that's wrong with humanity summed up in one post," wrote one 6ixbuzz commenter.

Joked another: "This guy may as well just come out and say 'I have a micropenis and I'm doing everything possible to compensate'."

The names of the men in the video have not been publicized, and any medical diagnoses from people on Instagram are purely speculative.

Thus, we cannot state for a fact that any of the men involved in the bottle stunt have abnormally small genitals. Should this be the case, Toronto Mayor John Tory would say that they might also drive excessively loud cars.