With temperatures in Toronto soaring as of late, ice cream parlours in the city are absolutely thriving in the peak of their best season, pandemic or not. But for one bustling frozen treats shop, their popularity with customers has meant some disfavour from the neighbours.

Dutch Dreams, which has been serving up cones on Vaughan Road near St. Clair and Bathurst for years, has been the subject of a slew of complaints from locals because of its long lines and crowds amid the health crisis.

But, owners say that the grievances are part of some long-running drama between the business and select residents of the area.

I love your cones, Dutch Dreams, but your social distancing is crap.

"These issues go way back. It has nothing to do with COVID-19... we just have some challenging neighbours," says co-owner Dina Aben, saying that Dutch Dreams has had disputes with a few families in the area over things like lineups, garbage, and more throughout the years.

One local even made a comment about the parlour's customers being "of a certain kind" from a certain area of the city, saying "we don't want them on our corner," Aben alleges.

And now, neighbours have been calling various types of inspectors in with complaints that the business isn't following proper health and safety guidelines, among other things.

"They think by having all these inspectors, they're going to shut our business down. Their goal is to have Dutch Dreams gone, but we're not going anywhere," Aben says.

In recent weeks, locals have taken issue with what they see as a lack of proper social distancing by customers crowding to wait in line for ice cream until late into the night, as the parlour is open until 11 p.m. on weekdays and midnight on weekends.

"They are open long hours until midnight most days, with crowded queues, lack of masks, no social distancing, noise due to overcrowding, and a horrible litter problem being caused throughout the neighbourhood," one local, who asked to remain anonymouse, claims.

"When approached about these issues, my polite but concerned comments have been responded to with ‘you are 100% wrong’ and other such dismissive comments before being deleted from social media."

They also say that some residents have had to go as far as posting No Trespassing signs on their lawns to keep Dutch Dreams customers from littering or loitering on their properties.

"Absolutely no Dutch Dreams customers on our property. Please enjoy your ice cream in the designated area on Vaughan Road. Love for all respect for all," one sign reads.

"Your ice cream dreams = garbage nightmares! Please take your trash with you, thanks," another states. 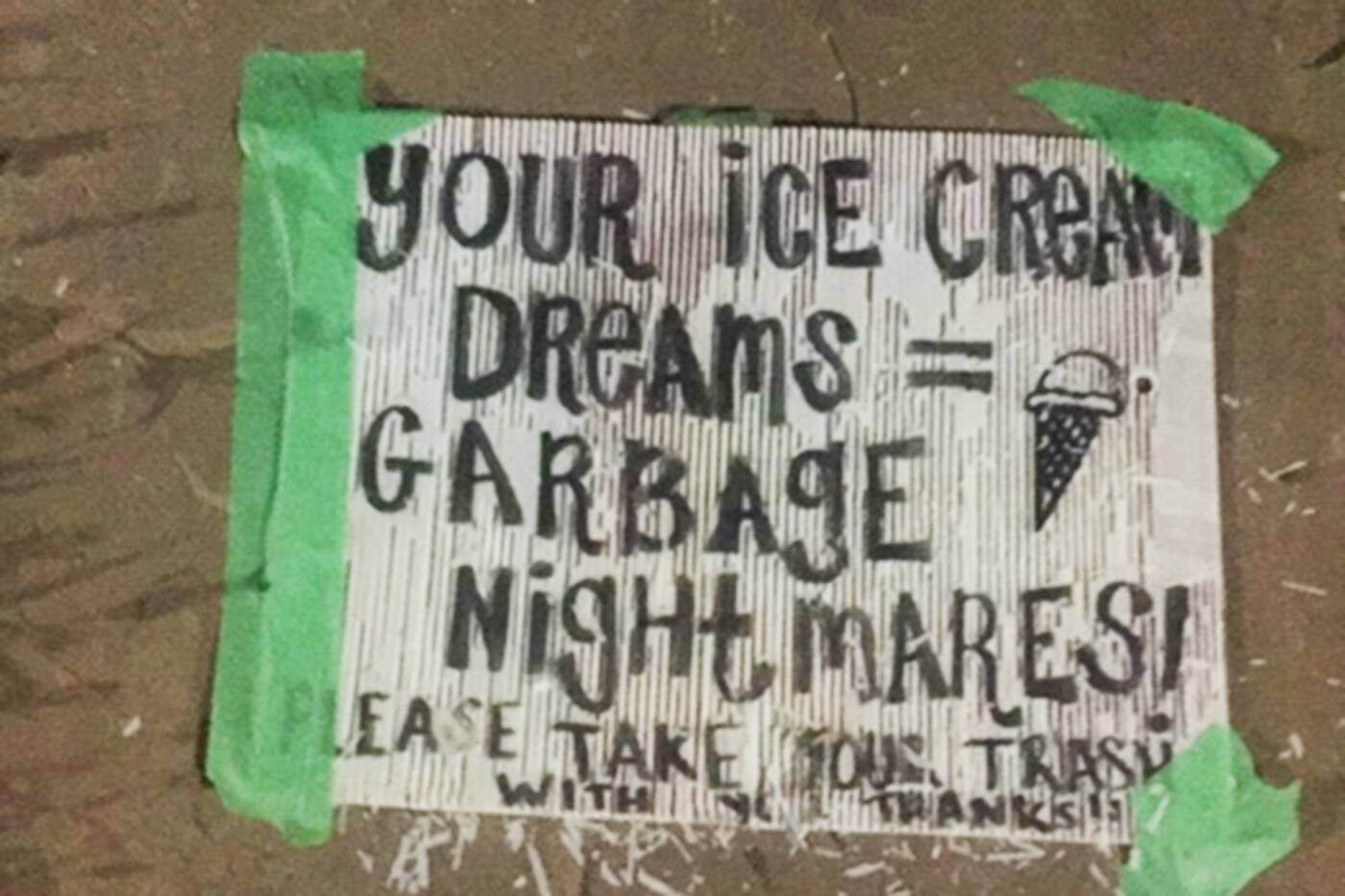 Aben says, though, that she is personally "completely paranoid" about COVID-19, and that the business has been strictly adhering to all protocols set out by the city and the province, including installing social distancing markers on the ground and regularly reminding guests to keep at least six feet apart from one another.

They've even gone above and beyond to ensure a smooth and physically distant payment and pickup process, and have no plans to open their inside dining area despite the fact that they are now technically allowed to under Stage 3.

"The line is social distanced all the time. My staff are constantly on  megaphones telling customers to social distance. We are doing everything in our power," Aben says.

"My customers have been amazing, actually. They order at the front door, we send them to the side door for pickup, and we're not even serving cones regularly — we put them down on the table and step back, and then the customer takes their cone."

And as far as the garbage complaints go, Aben says that employees go out after the storefront closes each night to sweep up any Dutch Dreams garbage they find in the area. Also, dealing with things like foot traffic and litter are part and parcel of living on a main street with commercial properties, for better or worse.

"They target us because we're reachable and we're not a big franchise. They have not given up and literally don't stop harassing us.... but you don't live in midtown Toronto if you don't want to hear or see people."

this is what we see in the neighborhood, thanks to dutch dreams and their inconsiderate customers. pic.twitter.com/Dv8HRyoWuL

Aben also believes that the concerns and social media comments are misplaced energy given the times we are in: "There have been people dying from this pandemic and you're worried about a customer parking illegally or a piece of garbage on the ground? This is where you're focusing your time?"

Still, it seems that there are many who have had a problem with the garbage, illegally parked cars or crowds at the shop — things that have been issues with many more popular bars and restaurants in the city — leading one to wonder to what extent customer behaviour should be the responsibility of the business to babysit, whether in normal times or in a pandemic when all new protocols are in place.