What started off as a regular Instagram post from one of Toronto's most popular coffee chains has become a hotbed of allegations from ex-employees against the company's owner.

Toronto coffee chain Jimmy's Coffee took to social media Tuesday to announce that nearly all of its seven store locations would soon be opening for takeout.

"We’re happy to be reopening everything!" said the post. "As of tomorrow all of our stores will be open (except our Queen West location)."

We’re happy to be reopening everything! 💛 As of tomorrow all of our stores will be open (except our Queen West location) #canadacovidportrait #georgepimentel1 #kensingtonmarket #southEtobicoke #Gerrard #Portland #McCaul #Mimico

But within hours, the post's comment section was flooded with angry accusations that moved beyond the store's reopening, including allegations of toxic work conditions and detailed accounts of mistreatment by Jimmy's owner Phil Morrison.

The comment section has since been disabled, but not before dozens of ex-employees of various Jimmy's locations came out of the woodwork to level charges that ranged from what they allege were inappropriate comments and wrongful dismissals to feeling physically unsafe while working at the cafe.

At one point, Morrison responded to one user with, "go fuck yourself", sparking more outrage. 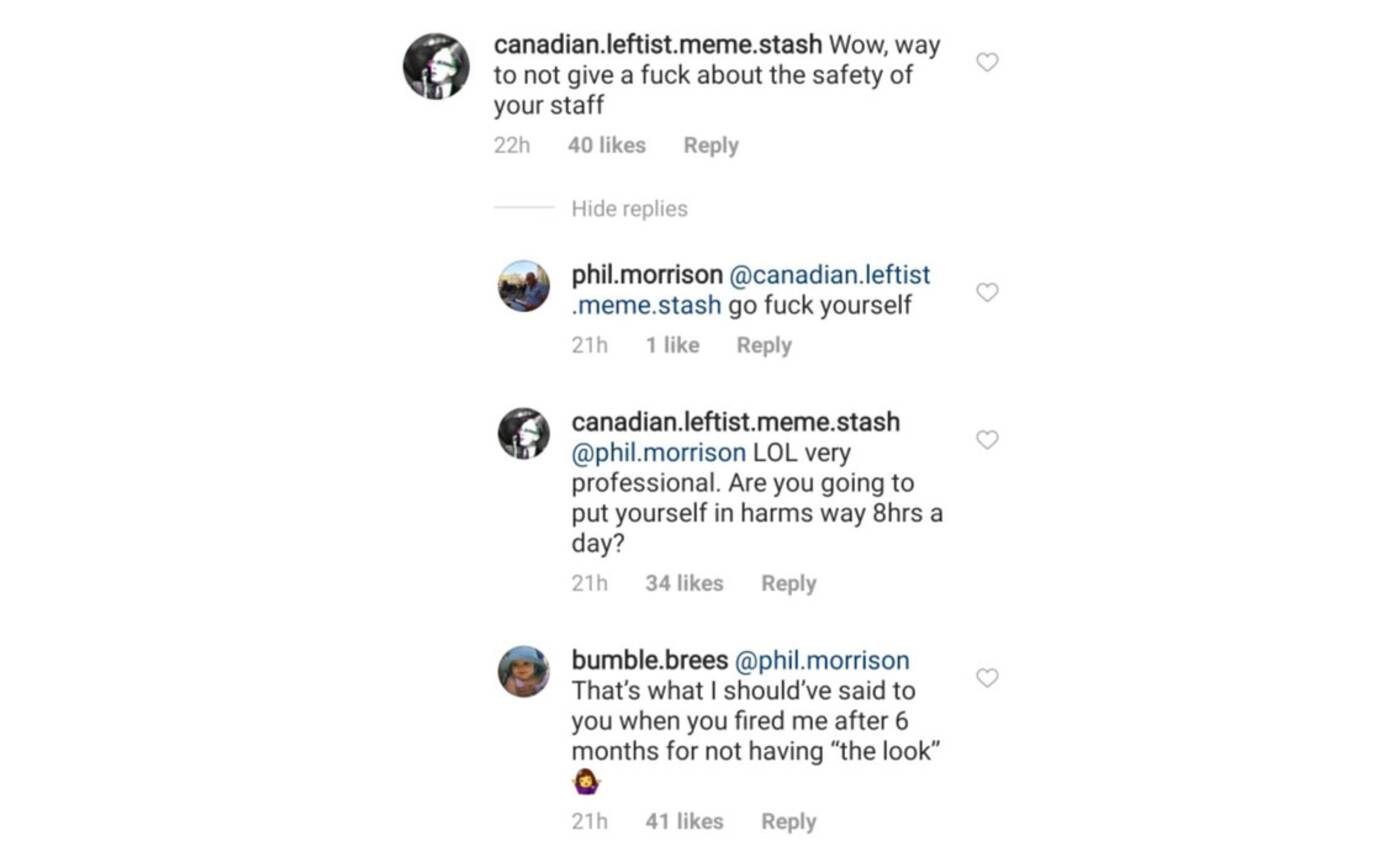 In a comment that has since been deleted, Jimmy's Coffee owner Phil Morrison used inappropriate language toward an Instagram user, sparking a flood of angry comments.

That comment has since been deleted, and a formal apology was issued over Instagram on Thursday, accompanied by a breakdown of how safety measures are being implemented at Jimmy's locations for their reopening.

"I would like to apologize to @canadian.leftish.meme.stash for my initial crude response on a comment on Instagram," said the post. "This is not easy for anyone, and everyone is on edge during this scary time. We hope that we can return to normal soon."

But the backlash continues, and more than 20 confirmed former and current employees of Jimmy's have reached out to share even more details about their experience working for the company.

I've tried to stay away from @Jimmyscoffee for a while now (since I heard the owner venting about the local homeless people), but this makes it stick. Too bad, because the employees at the Tecumseth location were always awesome. https://t.co/4Ete30OL35

"I never felt safe or comfortable coming into work knowing the verbal abuse I was going to face each shift and knowing I had no support both from other managers and even the owner of the company," says Whitney Eloise Héroux.

Héroux, who worked as a barista at Jimmy's Gerrard St. location from July 2018 to January 2019, alleges that she and her co-workers were constantly berated or threatened with layoffs over unreasonable physical demands.

Those included being asked to drag impossibly heavy bags of wet coffee grounds to dumpsters across the street, or being told to shovel snow during blizzards that made conditions unmanageable.

Jad Hammoud, who worked at Jimmy's flagship store at 107 Portland, recalls an incident where he alleges he was verbally reprimanded by the general manager for not sending people home early to save on labour costs.

"...Nobody had thoroughly articulated to me the expectations on labour, how to track it, and how to adjust accordingly," says Hammoud. "A recurring theme with upper management is that the employees are lazy and bad." 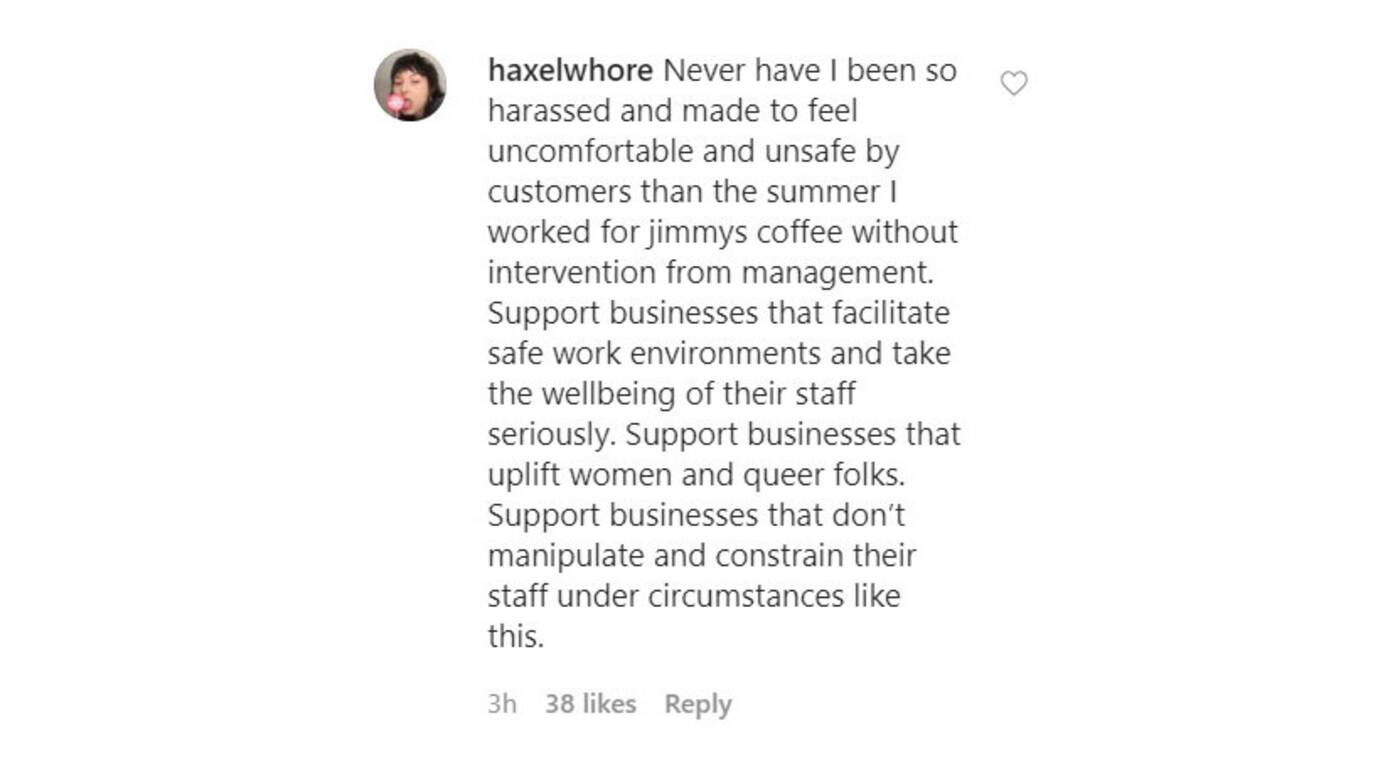 A number of former Jimmy's Coffee employees spoke out against the chain's owner Phil Morrison in an Instagram post that has since had its comments disabled.

The list of accusations against Morrison run on. Some recall him giving what they allege were inappropriate back rubs to female members of upper management.

Others claim they weren't allowed to turn on the AC despite temperatures that went upward of 30 C in the store. Many suggest the owner had anger management issues, which they allege led to a number of senior staff quitting on the spot. One person alleges being fired for "not having the Jimmy's look".

An assistant manager who worked at Jimmy's for over five years (who has asked to remain anonymous) says he can back up all the mentioned accusations against Morrison, having trained many of those ex-employees crying foul.

"The ridiculous firings, the nepotism and favouritism, the lack of care towards employee wellbeing, the veiled threat of asking staff to return to work during quarantine or lose their job, the new Draconian rules on everything from only playing his music playlist to how to talk to customers... This was par the course with Phil."

one of many stories from when i worked at jimmy's: my coworker was alone in the store when a group of men attempted to break in, shattering the door (which was, and still is, glass) and yelling at her that they were going to come inside. 1/? https://t.co/1wW71z1T2T

But for many employees, the boiling point at Jimmy's followed a series of tip thefts at multiple Jimmy's locations, including one man they say entered the Gerrard St. store wielding a knife for two days in a row.

And at 107 Portland, they say a group of men unsuccessfully attempted to break into the store. They say the men managed to break the front door while an employee was working alone, but that no concern was shown for the staff member's safety or well-being, allege several former co-workers.

"Jokes about keeping guns behind the bar were made, and once again she was not sent home early that day," claims Hammoud. "She worked her entire shift."

Despite safety concerns, staff say they were still expected to open and close stores alone.

In response to the allegations, Morrison sent blogTO a statment: "At Jimmy’s we take the physical and mental wellbeing of all our team as our highest priority... It would be wholly inappropriate for me to respond to you on unsubstantiated allegations."

"Any individual grievances being expressed by current or former Jimmy’s employees should be addressed directly to the company. I must refute any allegations of verbal abuse levelled against any member of the staff."

Dozens of Jimmy's employees have come out with allegations of toxic work environments at a number of the cafe's locations.

But many of those allegations were made on this week's Instagram post, which has since been cleared of comments, including one from Ashlyn Hader, who says she was a full-time barista at 100 Portland from November 2018 to October 2019.

"While most of the commenters have left Jimmy's and moved on to other jobs, it's hard to see our peers who haven't yet had that option continue to have to work for Phil, and frustrating to see his continued success, as customers don't know what goes on behind the scenes."

"We haven't had a means of successfully speaking out like this before, but once Phil himself responded 'Go fuck yourself" to a negative comment from a former employee, the opportunity was right there."