Castro's Lounge, the long-running bar and music venue in the Beaches, has been having its fair share of drama lately.

Co-owner Anthony Greene made a post on the Queen Street East establishment's Facebook page earlier this month claiming that an altercation between he and a liquor inspector had unfairly put the future of Castro's in jeopardy.

In the alleged argument, which took place over Facebook messenger, Greene compared the female inspector to the tyrannical Aunt Lydia from The Handmaid's Tale. It led to him being arrested for intimidation.

It would suck if they were closed over this, but it sounds like the owner really crossed a line of he was arrested (later released) because of an email

The co-proprietor apologized for the private messages in the since-deleted post on Castro's social media, saying that though his comments were unprofessional and "at the very least an unfavourable characterisation of a civil servant," he doesn't believe that they were grounds for revoking the lounge's liquor license, which the Alcohol and Gaming Commission of Ontario tried to do.

Though the charges against Greene were dropped in the end, the incident landed him a lifetime ban from his own bar.

Though he mentioned this fact in his initial post, what he didn't make clear is that he contravened the ban by showing up to the venue on multiple occasions — something brought to light in a newer Facebook post by fellow co-owner Stephen Reid. 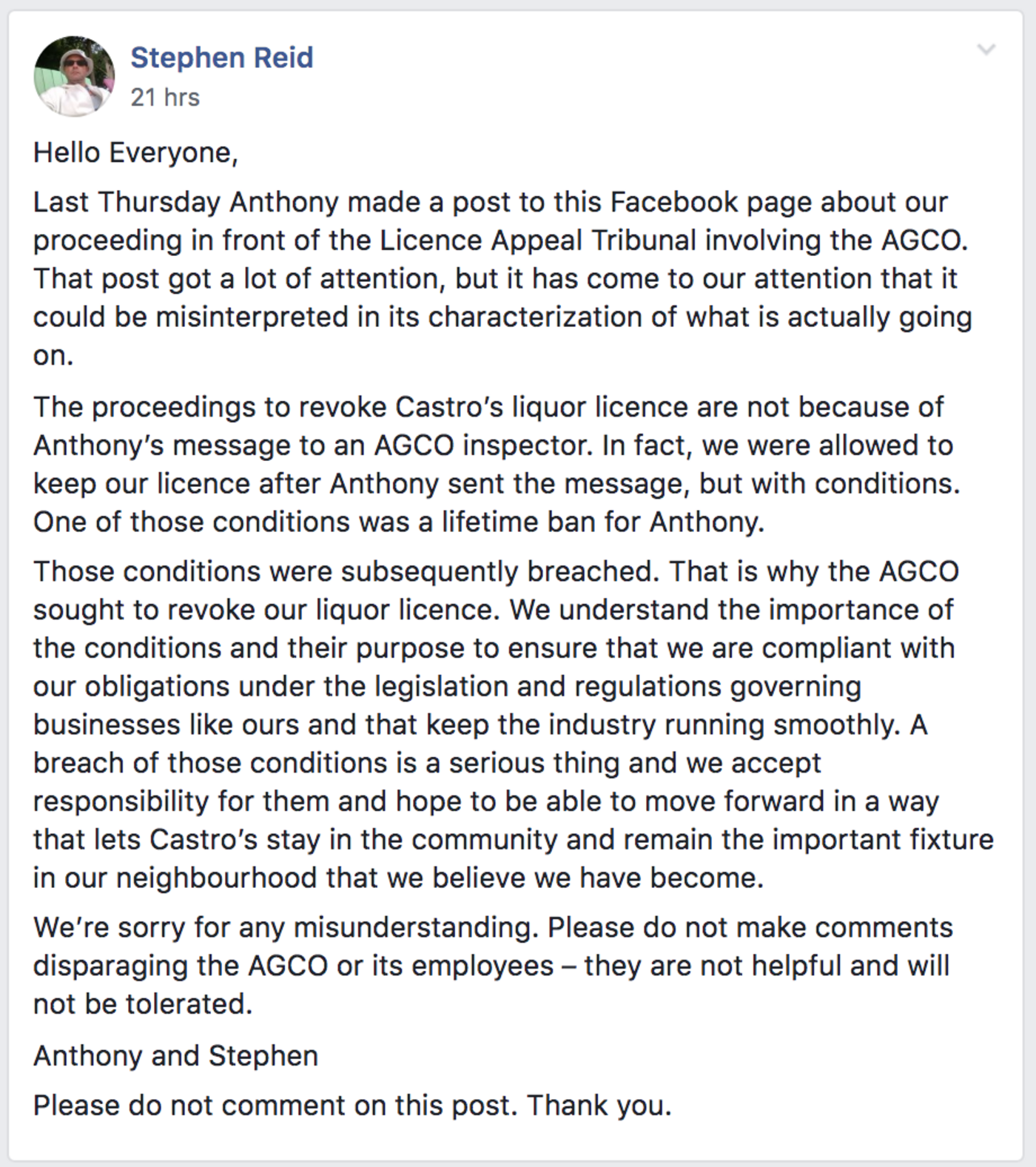 Reid said in the post that Greene's remarks on the Castro's Facebook "could be misinterpreted in [their] characterization of what is actually going on," as the ACGO's move to revoke the community hub's liquor license were apparently due to Greene's breach of the terms of his ban — a ban that was a condition of the establishment keeping its license — and not because of the original conversation that prompted it in the first place.

That second post, from January 21, has also now been deleted.

Amid the whole ordeal, which has included the launch of a petition against the ACGO to keep Castro's open, Greene has had no choice but to step down and give up his share in the venue so that it can keep its license and remain open, The Star reports.

This is crazy and unfair. Totally over-the-top reaction by bureaucrats. @fordnation ⁦@RodPhillips01⁩ and @douglasdowney need to take a look at this. “To save Castro’s Lounge, co-owner says he’ll give up his share of the bar” #onpoli https://t.co/qz663e5v95

Musicians, MPPs and other members of the local community rallied behind the Castro's team as they prepared to face hearings about the bar's fate before the License Appeal Tribunal this week.

According to the most recent post on the bar's Facebook, the AGCO today decided to cancel the hearings and permit Castro's to remain open, as Greene's decision to step down means Reid will now serve as its sole owner and license holder.

But, Reid says that he feels the resolution comes "at a terrible cost."

"I have been Anthony's business partner since we purchased the bar together in June 2011. I am wracked with grief that it has come to this," he writes in the post. 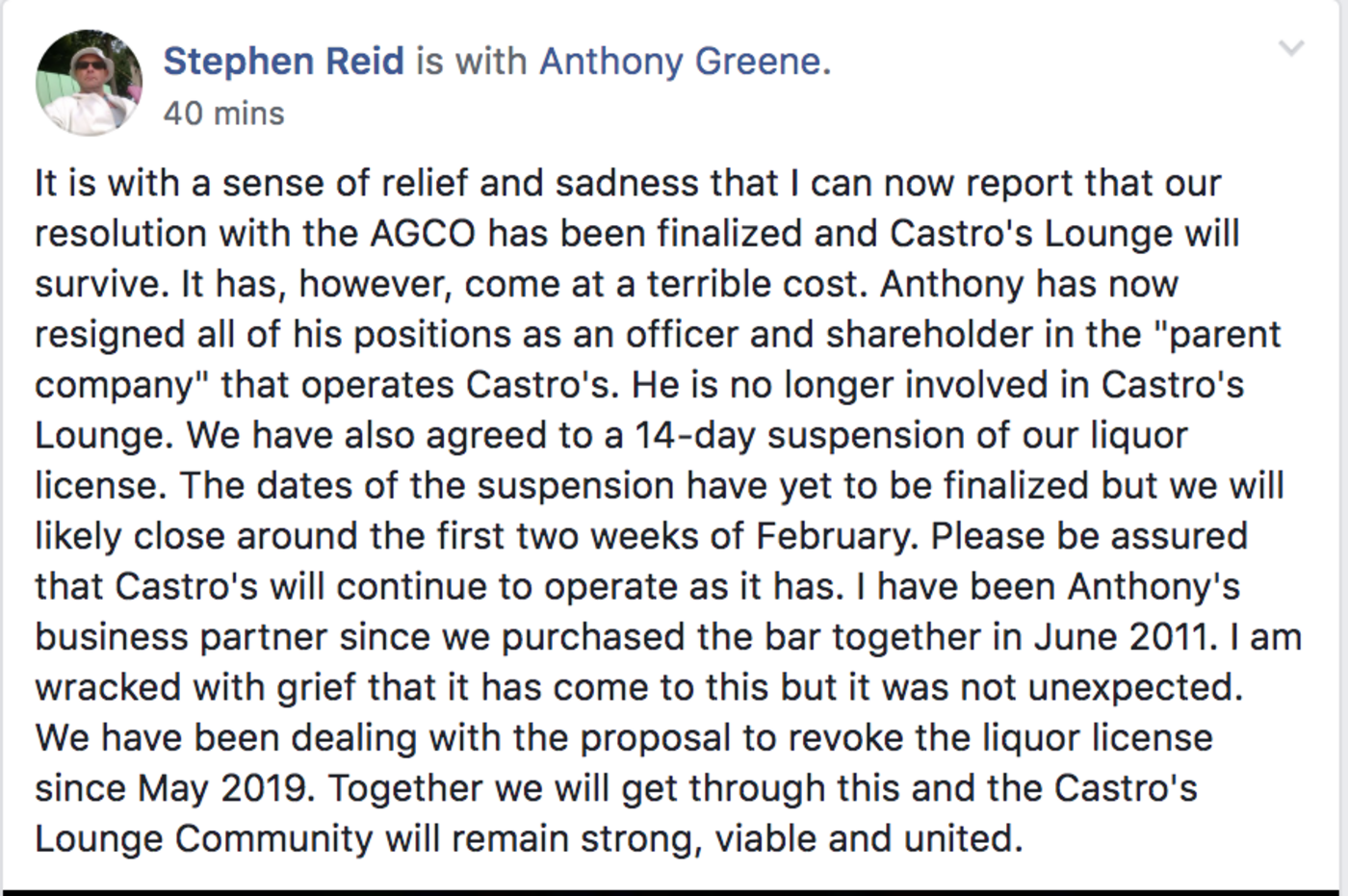 Castro's will be allowed to continue to operate as is following a 14-day liquor license suspension, which will commence on a later date to be determined.