Local pot-stirrer Sugo is at it again.

The popular Italian joint at Bloor and Lansdowne has once again found itself at the centre of a public feud—this time with an ex-customer—going down on social media for all to see.

The origins of the beef actually trace all the way back to a bad Google review from nine months ago, but resurfaced recently on the Instagram page of none other than Chef Anthony Walsh—weird.

A very solid and superdeluxe lunch with the chief from @gauchopieco at @sugotoronto good to be home!!!!!

The executive chef of Oliver & Bonacini posted a picture of his meal at Sugo, along with his praises for the restaurant, three days ago.

Not long after, user @zathorious commented, "You can't actually think it's good?"

After coming to the defence of the restaurant's food, Walsh eventually tagged Sugo's Instagram account in the conversation.

What ensued was a biting exchange of words between the man and Sugo's co-owner Connor Joerin, who ultimately ended up banning Joseph from the restaurant forever by saying, "Do us a favour and don't come back!"

"You came in got a take out gnocchi, left a shit google review and when I contacted you about it, you didn't even have the class or stones to reply," wrote Joerin.

"Go back to whatever city you came from. We don't want guys like you in our town." 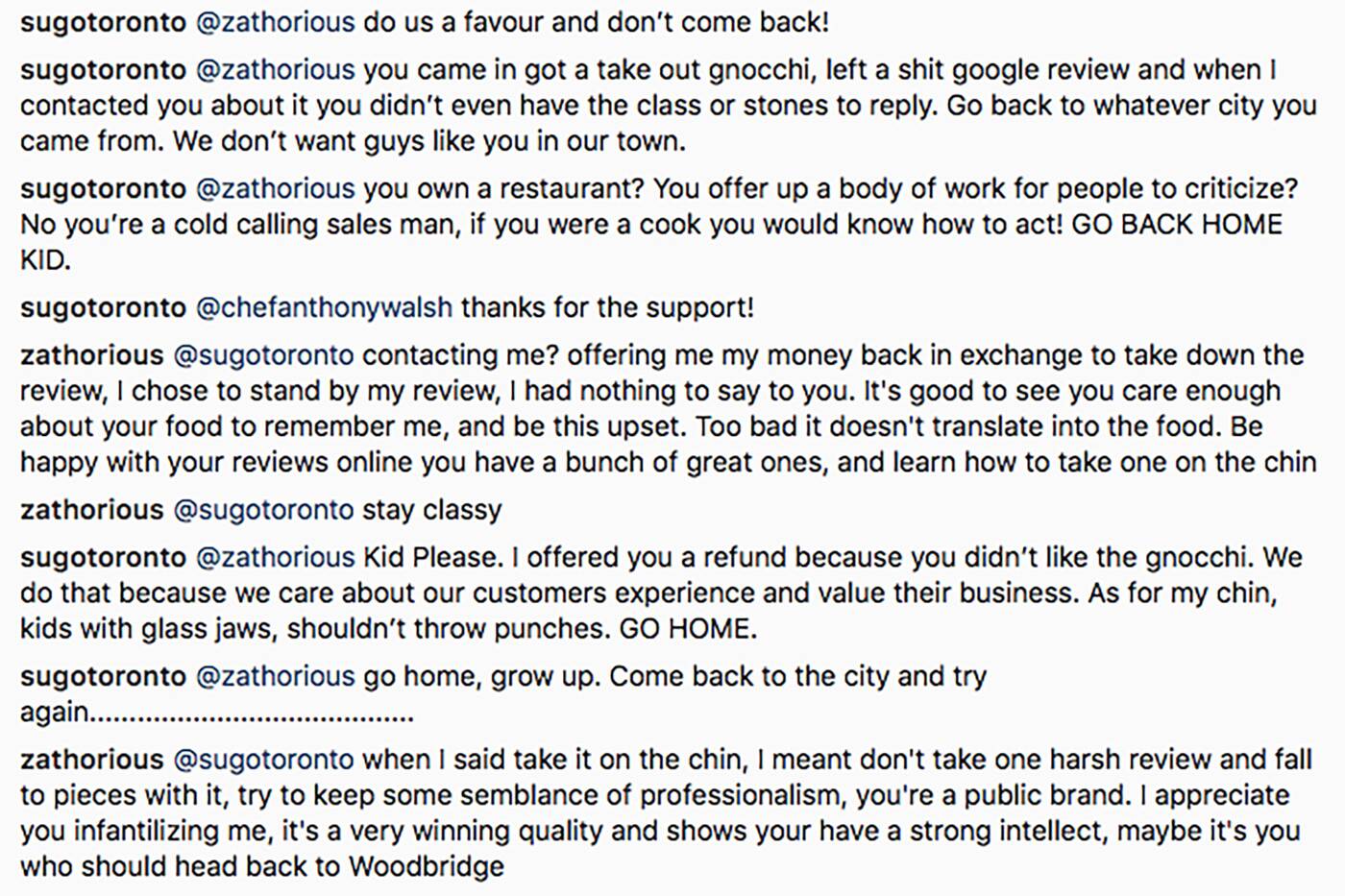 Part of the exchange between Sugo and an ex-customer @zathorious on Instagram.

Another user, @esjonks, chimed in: "Being celebrated as a rude douchebag is not exactly a good thing. Telling a foreign national to go home because they didn't like your shitty gnocchi definitely isn't."

To that, Joerin replied: "Come in and have lunch we can discuss this more over gnocchi."

From pestering other local Italian businesses via geotags to being at the centre of an heated accessibility debate, Sugo's Insta has earned its share of notoriety since joining the Toronto restaurant and social media fold last year.

This recent conversation, which the ex-customer in question describes as harassment and highly prejudicial, is just the latest in a string of Internet squabbles.

But Joerin, who handles the Instagram account, says that the IG back-and-forths are part and parcel of being an independent restaurant, and that all small businesses should "stand up for themselves."

"My strategy is a little bit different...when someone has something bad to say to me, I call them out on it," he says. "...When you’re writing a review like that you're not just hurting my feelings personally, you’re hurting a lot of other people too."

"I don't think people are used to small businesses speaking out and speaking back."

Also part of Sugo's strategy: reaching out to past customers who've left negative reviews on Google and offering them a refund, and a meal on the house.

They've done it about ten times, he says. The results have varied from some customers amending their reviews to more positive ones, to others leaving the negative comments as is, but returning to the restaurant for a second try.

So when a man came in to the restaurant nine months ago, ordered a gnocchi to-go, and left a bad review of the restaurant on Google, Joerin says he did the same thing, and DM'd him his personal number and e-mail.

He never heard back, until a few days ago, when he saw the negative comments on Walsh's post.

And despite the man hinting at one point that he might give Sugo a second shot at Walsh's recommendation, Joerin says he's not welcome anymore. Plus he's sticking behind his "go home" comment.