Why people are still waiting in line for Jollibee in Toronto

It's already been three months since the Filipino fried chicken sensation Jollibee opened in Scarborough, but it seems like the chain's palabok game is still going strong.

Though lineups are definitely not as crazy as they once were (read: waiting in tents for seven hours), people are still queuing up for those six-piece buckets and peach mango pies, with average weekend wait times of around 20 minutes. 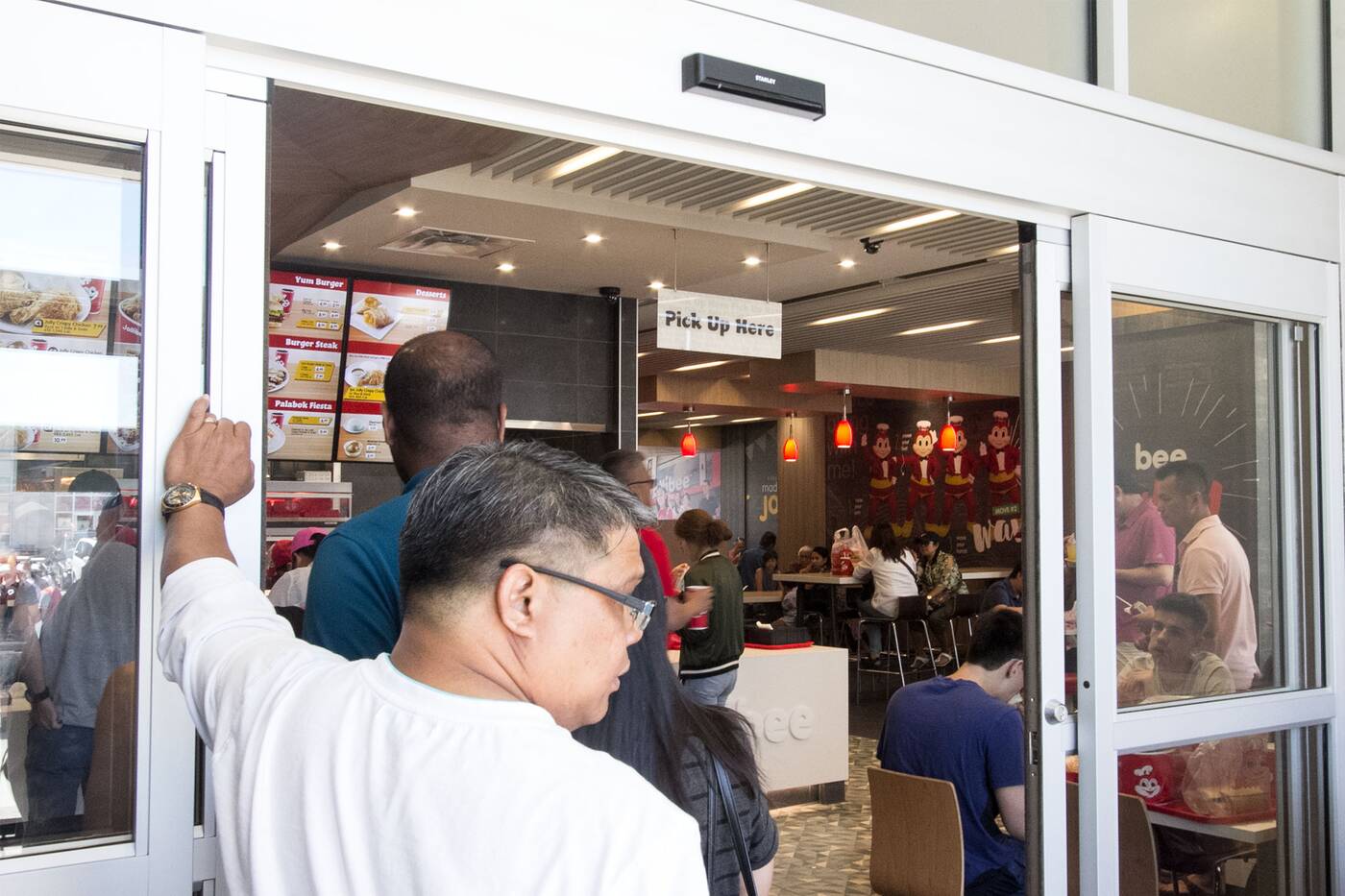 At this point, the restaurant is so used to the crowds, they've created a highly efficient lineup area with two sections, replete with stanchions and some very competent traffic conductors to direct customers.

It's evident that there's more to Jollibee's appeal than just the food. We asked some people in line (first-timers and longtime Jolly chicken lovers) about their connection to Jollibee and what they planned on ordering once they got inside. 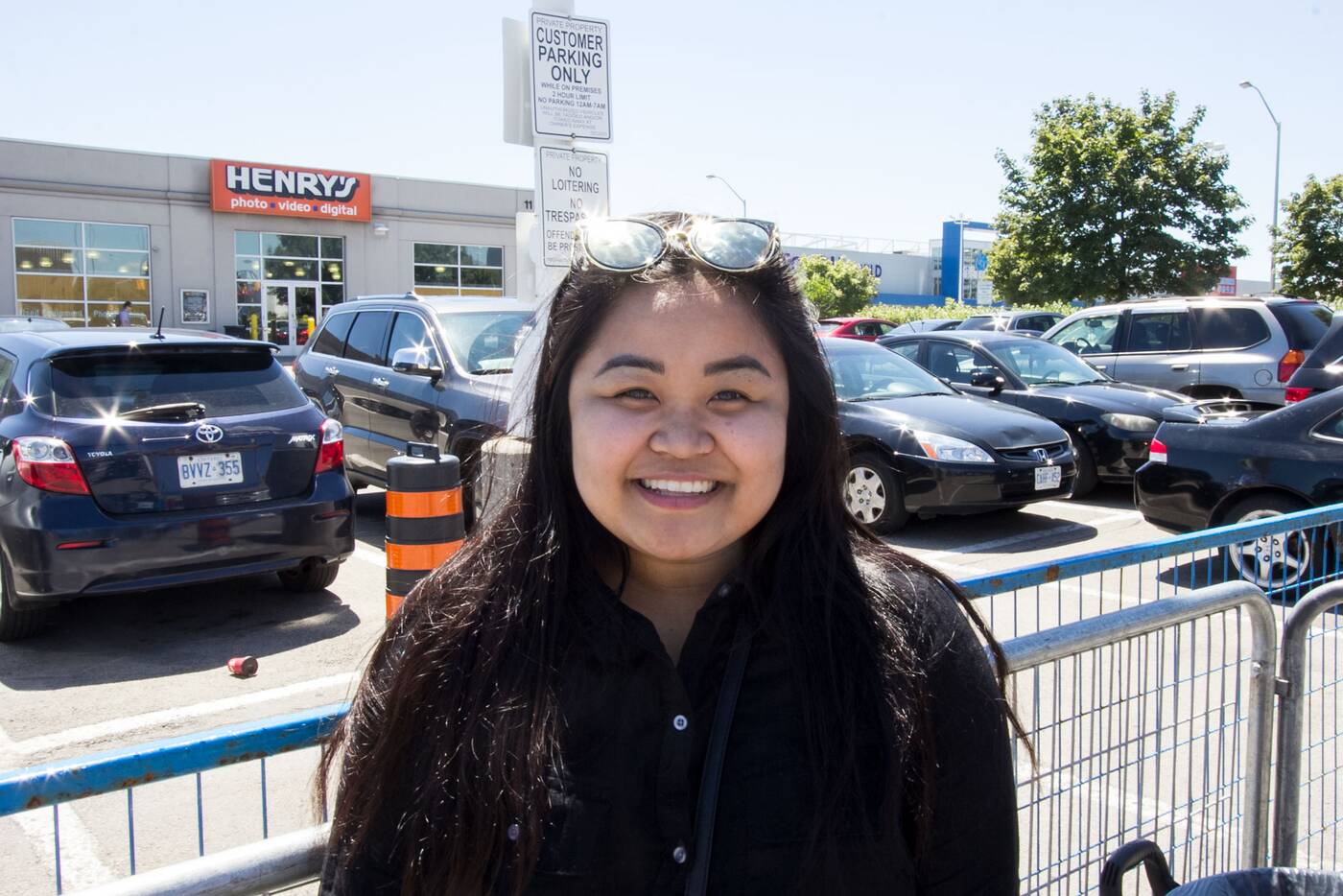 "I love the chicken, and I like how it brings childhood memories of back home. Also they're the only [fast food place] with chicharron and rice."
Order: Fried chicken and rice. 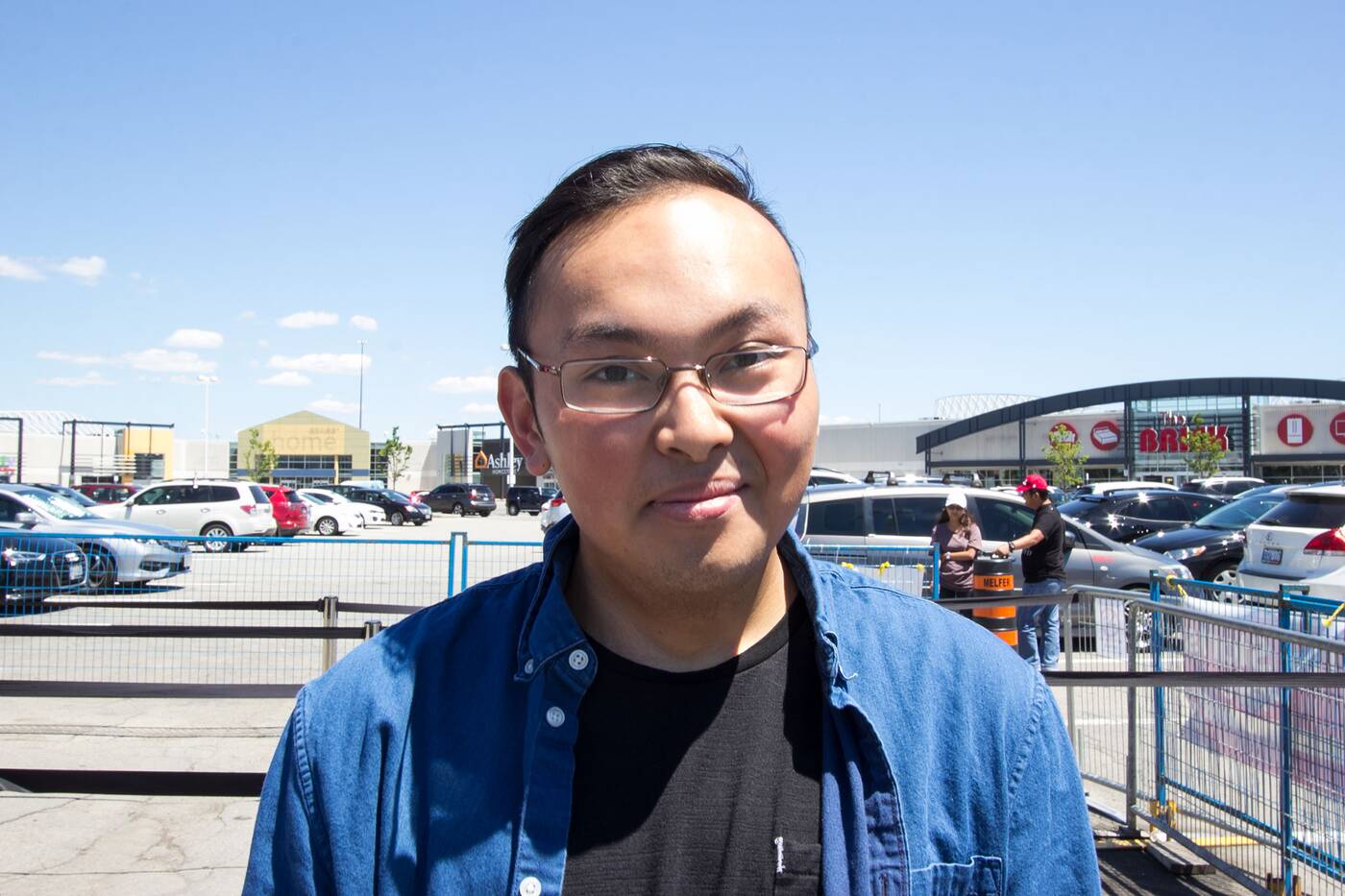 "Its our first one [in Canada]. I grew up in the Philippines and it was a weekly thing; I've been craving the peach mango pie."
Order: Peach mango pie and fried chicken. 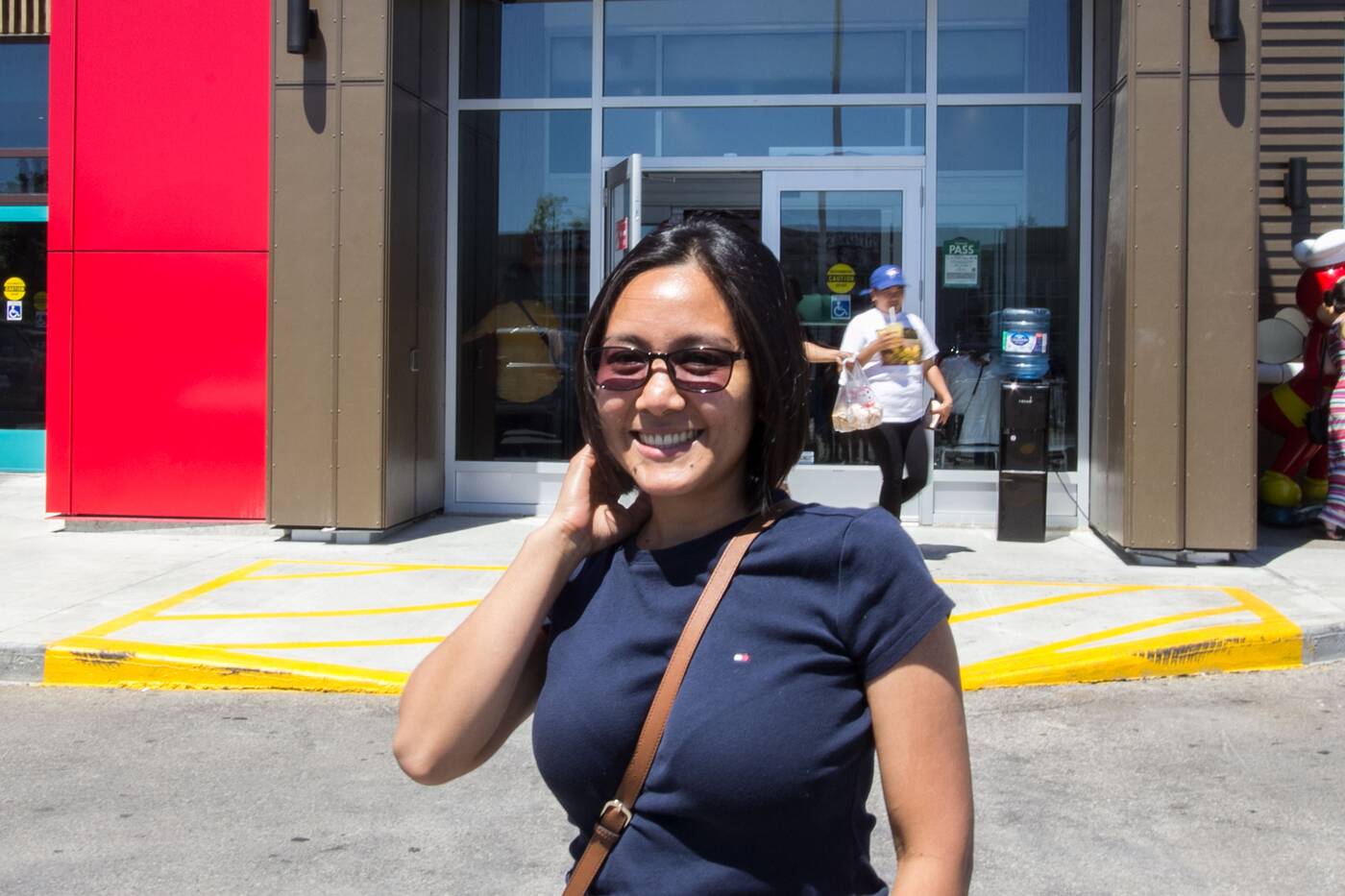 "It's just a treat. When you're going to Jolibee it's like reliving your childhood."
Order: Chicken bucket and palabo. 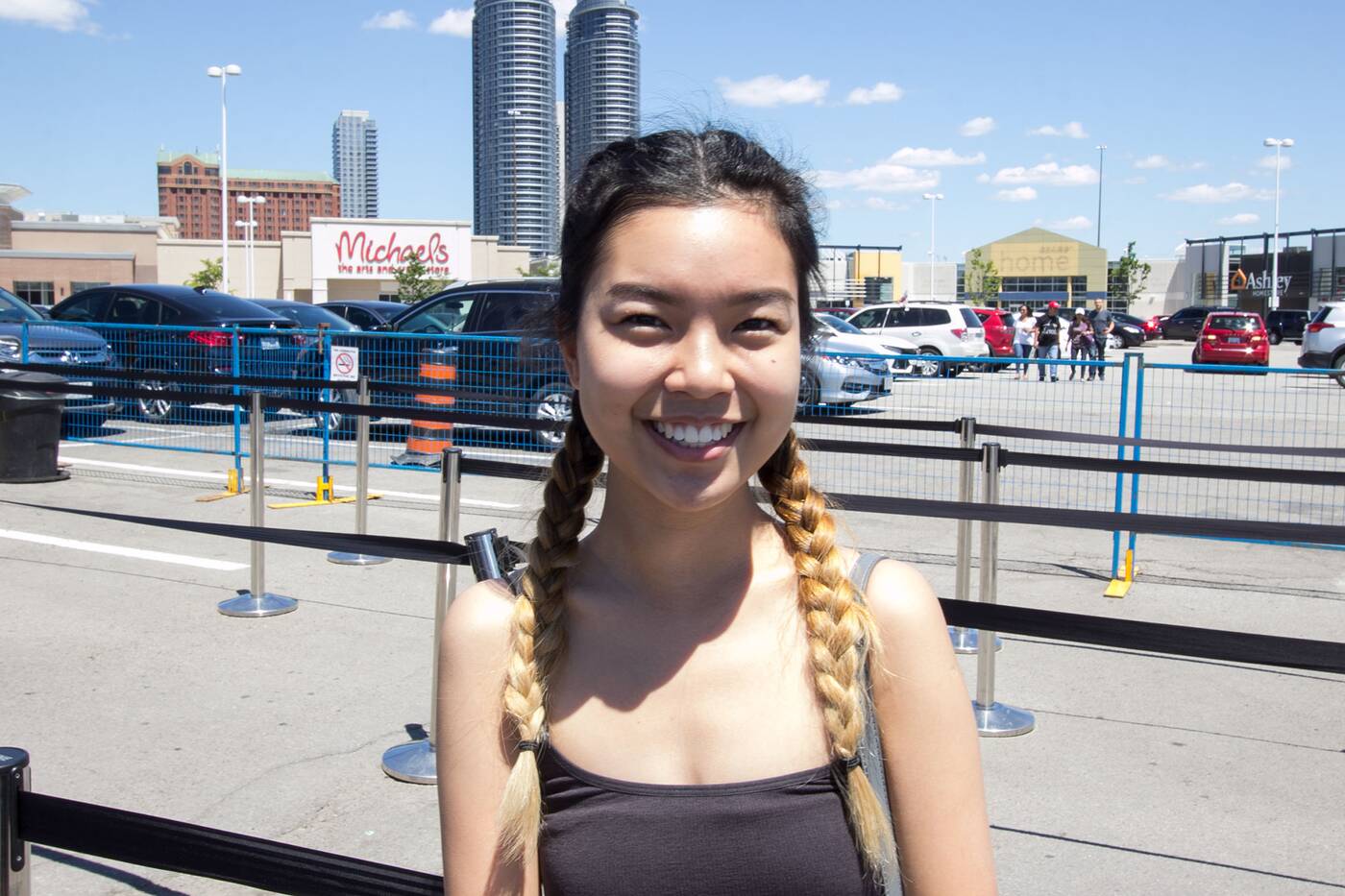 "I've been watching a lot of mukbang and a lot of them were of Jollibee. I blame Youtube: now I want everything."
Order: Fried chicken bucket, palabok, pineapple juice and the Halo Halo. 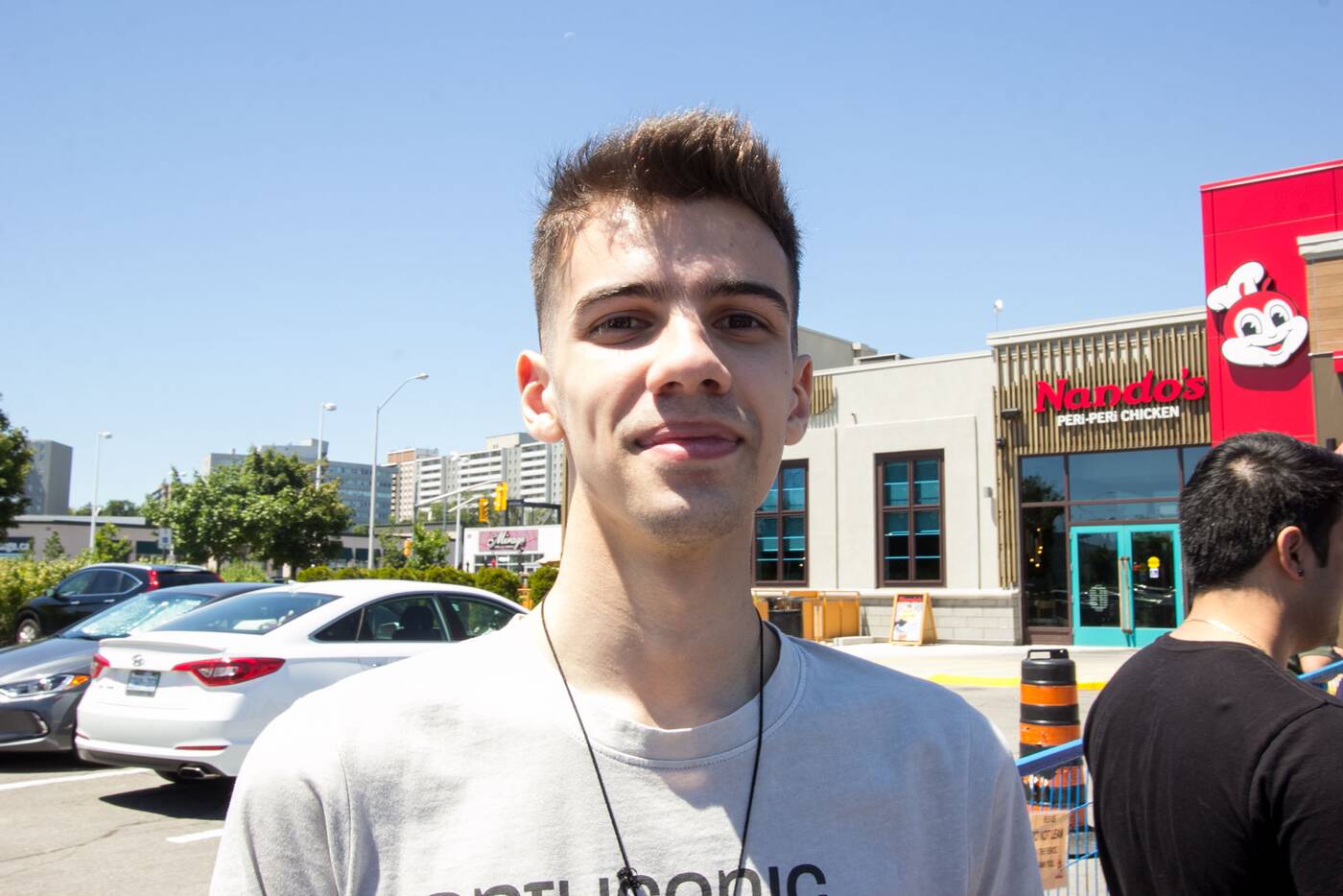 "We just came from Montreal and I don't even know what the menu looks like."
Order: No idea. 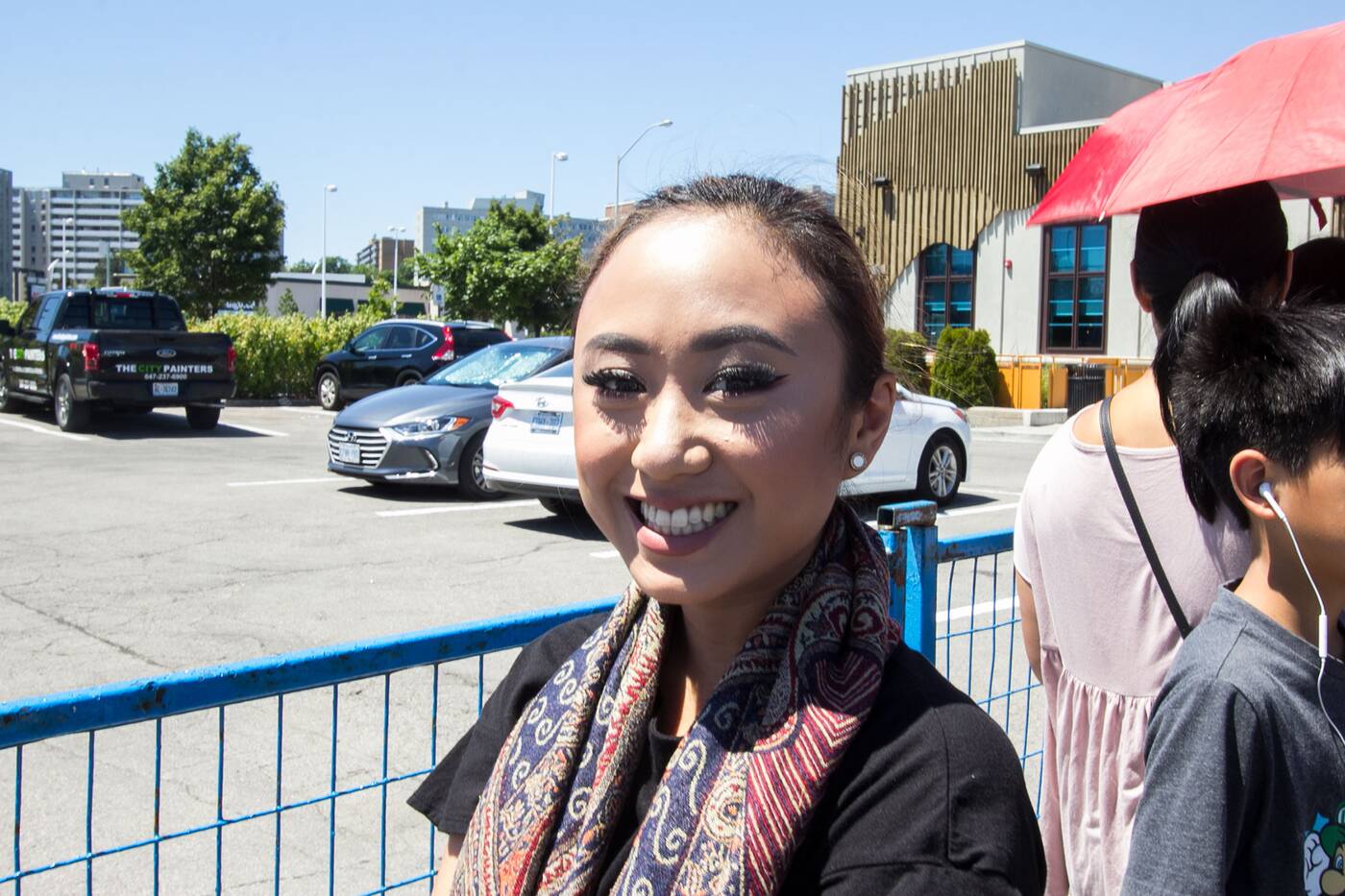 "I had it when it when I was a kid, but your taste buds are totally different when you're older, and I actually don't remember anything about what it tastes like. I actually only came here for the pie."
Order: Mango peach pie. 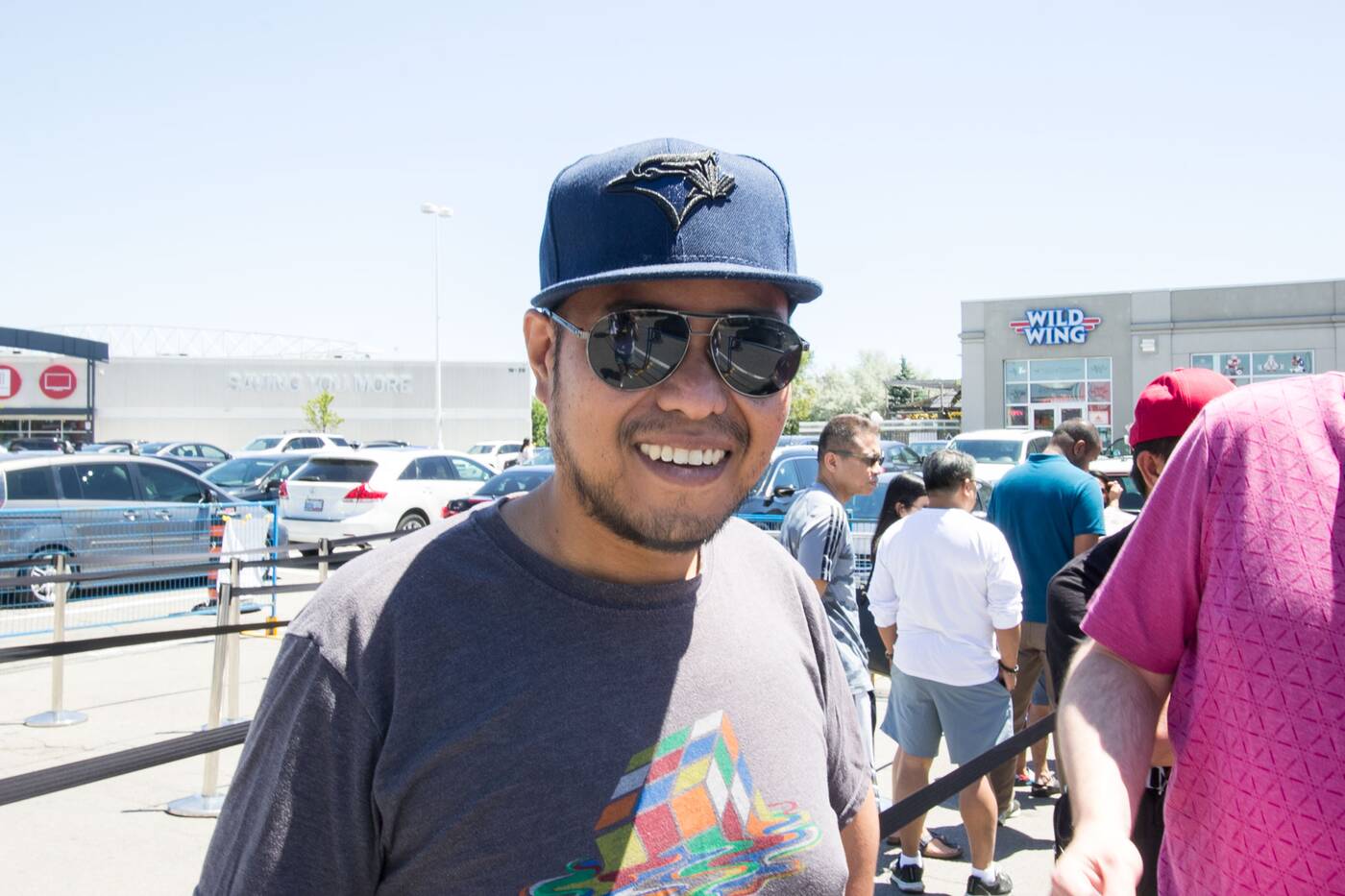 "I've been putting it off since it opened. Even though it's 'fast food' there's still a line, but it's finally a nice day so I came from Brampton."
Order: Two buckets of fried chicken, family pack of spaghetti and palabok. 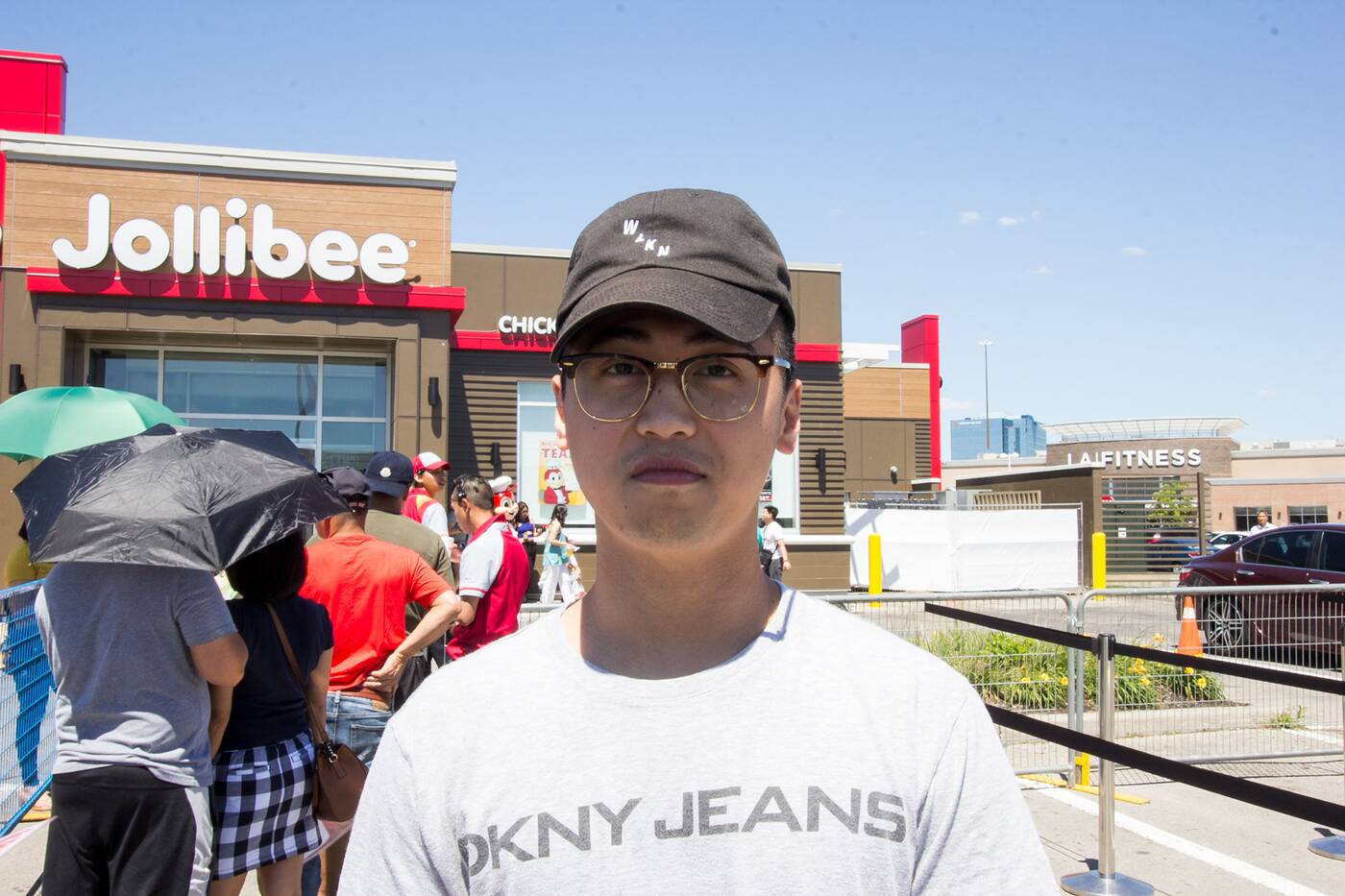 "I already know the taste of it, but I just ike to see so many Filipinos together."
Order: Chicken with rice and gravy. 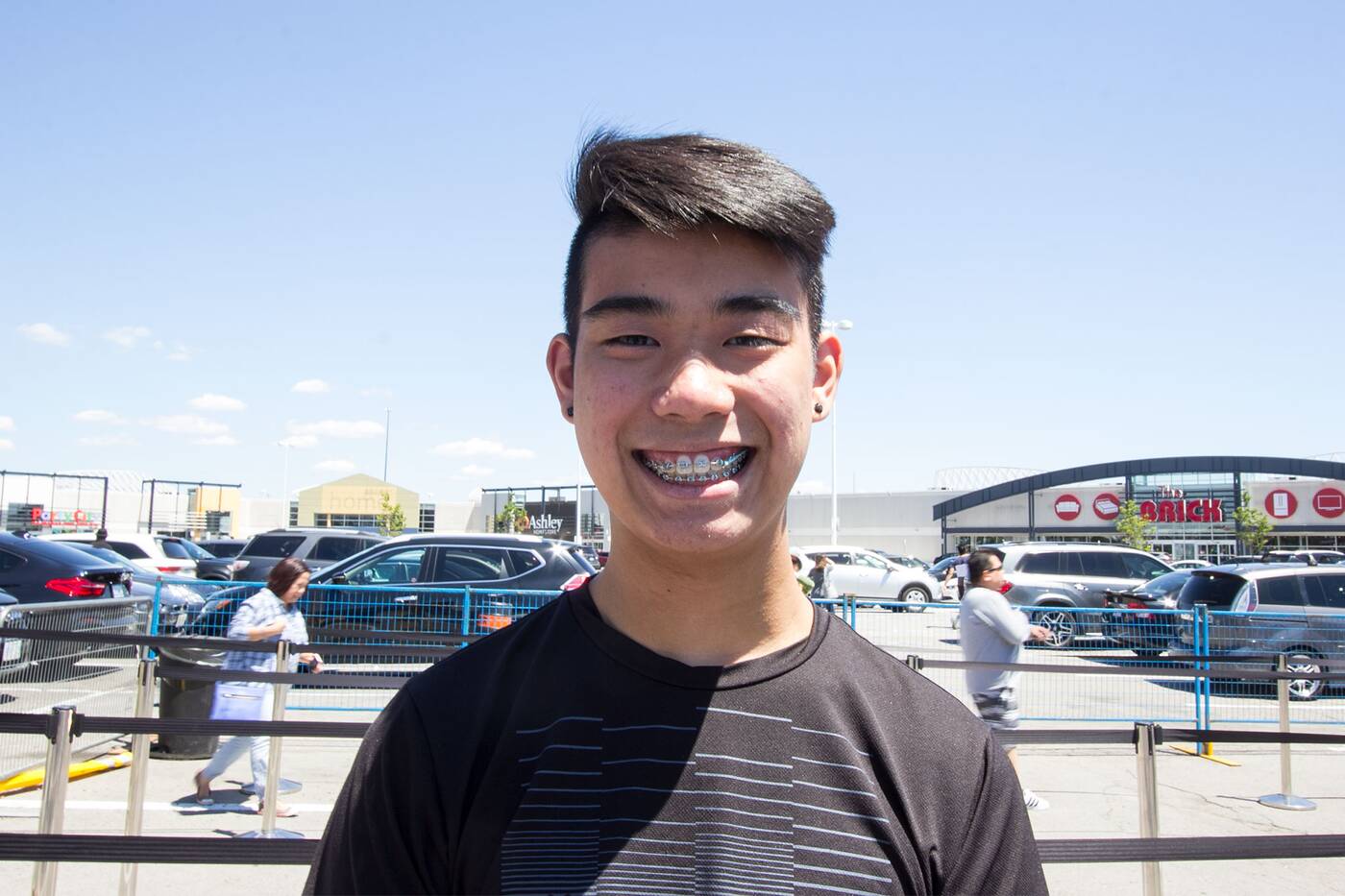 "All my Filipino friends keep hyping it up and I've never been here before, so I'm trying it now."
Order: Fried chicken, spaghetti, pineapple juice and peach mango pie.