The top food trucks in Toronto by type of cuisine

Food trucks in Toronto have mostly kept pace with the types of food offered at brick and mortar restaurants. From BBQ to Ethiopian, sushi burritos and beyond, you can get pretty much anything from a truck these days.

Here's a round-up of Toronto food trucks by type of cuisine.

Each winter the folks at ME.N.U Food Truck travel to Asia and bring back some new recipes to their food truck. Here you'll be able to order everything from rice balls to Asian poutines to roti tacos.

When it comes to smokehouse grub the Hank Daddy's Barbecue truck know what they're doing. Ribs and their infamous pulled pork parfaits are just some of the favourite offerings available. 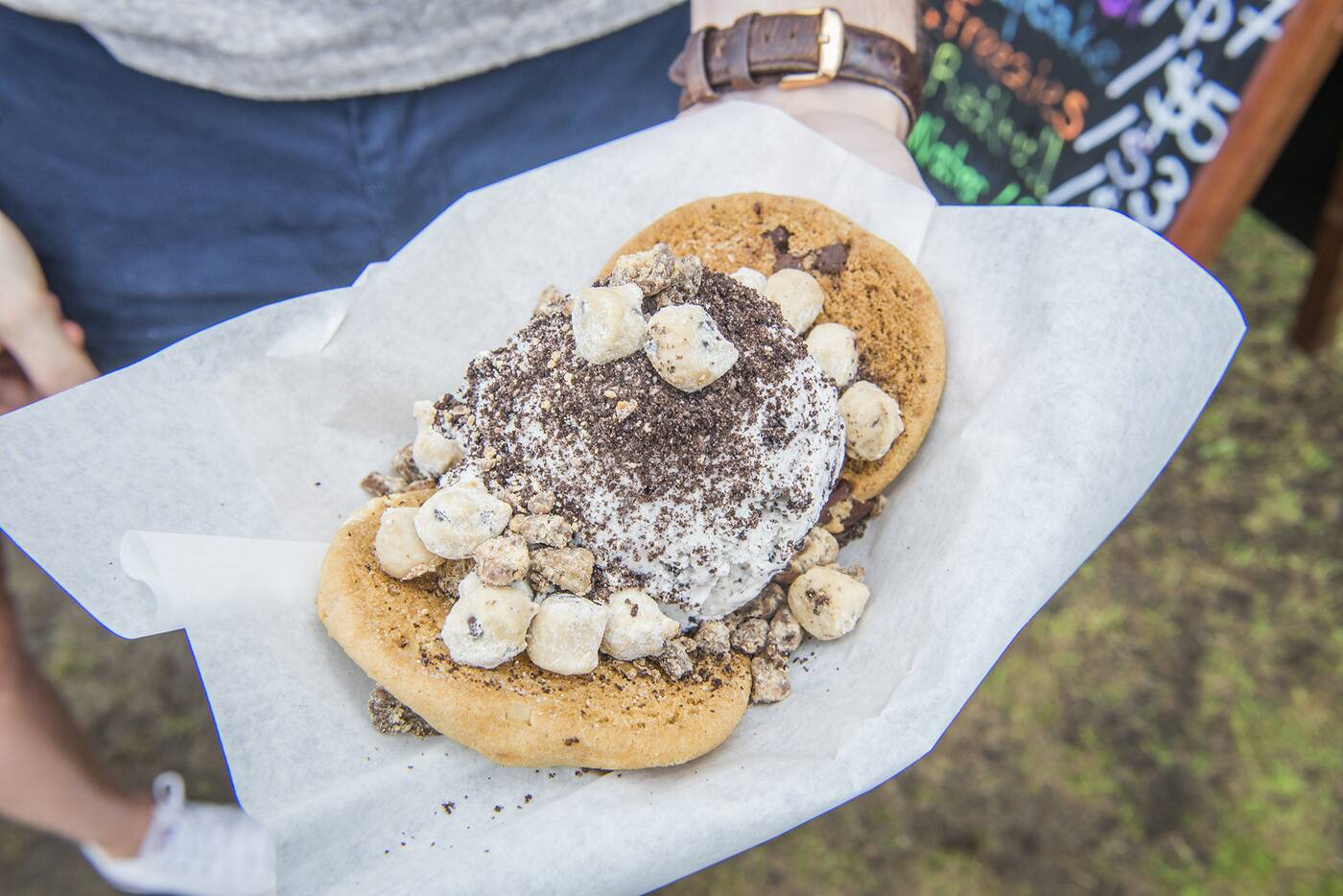 Customizable cookies and cupcakes are the speciality on the Bake Three Fifty truck. They also do ice cream sandwiches if you need a cool down.

Made In Brasil is an extension of Toronto restaurant Mata Petisco Bar. Similar to the restaurant the truck takes you on a journey south of the border with its South American fare.

What's the perfect start to day? Tater tots of course! The Egg Man is serving them up poutine style with hollandaise sauce or as a side to your bacon breakfast sandwich.

Burgatory serves a range of burgers named after the seven deadly sins. There's the Greed Burger with bourbon BBQ sauce with double smoked bacon and Pride Burger which is offered veggie style.

When it comes to Canadian classics BeaverTails has it down pat. BeaverTail pastries grace the menu along with killer poutine. 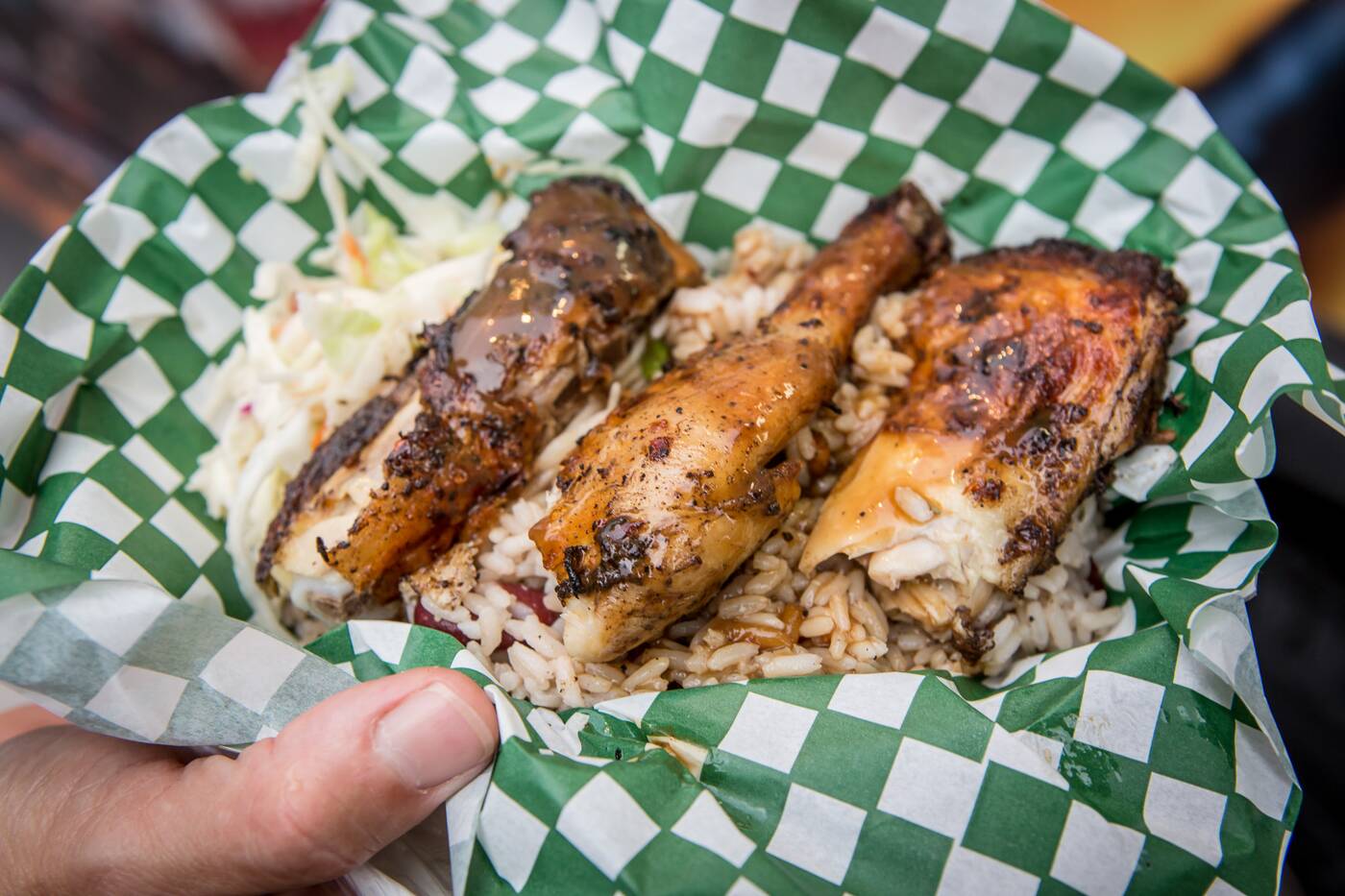 Satisfy cravings for jerk chicken and Jamaican patties with the Jerk Brothers food truck. They're often found at University and Dundas so if you're in the area on lunch stop by.

A cheat day favourite is the Festival Fun Food truck. They're dishing out all your favourite carnival fare including funnel cakes and deep fried candy bars.

Hungarian chimneys most certainly deserve their own category. Whether you want them savoury coated in garlic and herbs or filled to the nines with ice cream and toppings Eva's Original Chimneys can assist.

I Love Churros are from the folks behind Pancho's Bakery. Just like the popular Mexican bakery the truck serves churros stuffed with your choice of filling. They sometimes have their churro cones available too.

The tiny blue Jacked Up Coffee truck will keep you caffeinated all day long with their lattes. 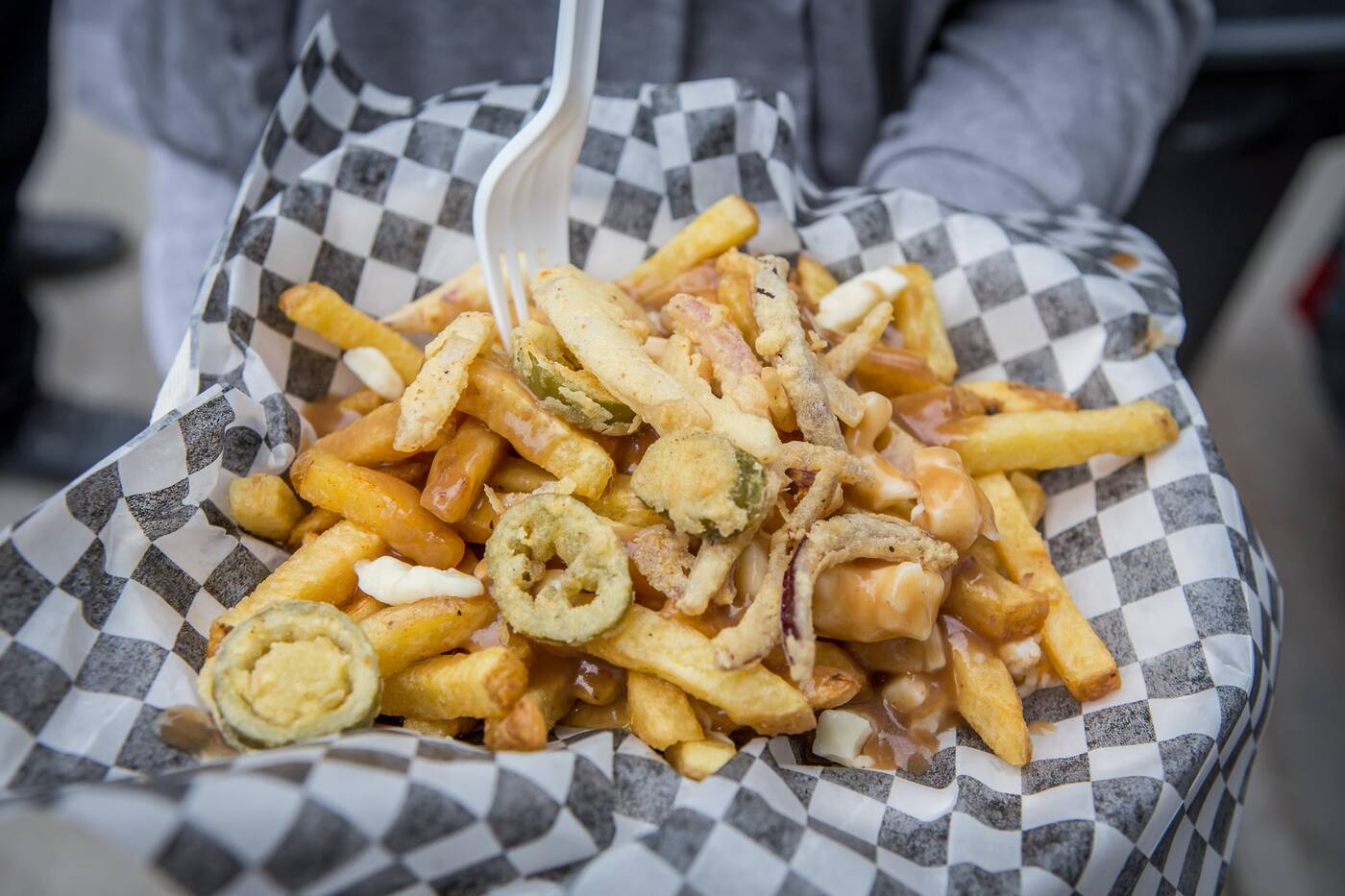 Sometimes just some good 'ol fashioned comfort food makes the perfect lunch. Untamed Chef does just that with their menu of sandwiches, poutine and fried foods.

feasTO is your number one option for delectable dumplings. They offer them in flavours off pho beef, Thai green curry and lemongrass chicken.

Tiny Toms Donuts is busting out donuts topped with icing sugar or cinnamon sugar from their various trucks that can be found at almost any truck festival.

The Spicy Ethiopian is Toronto's first and only Ethiopian food truck. While you may think this cuisine isn't ideal to eat on the go you'll be proven wrong once you see the perfect packaging this truck provides.

Prince Edward's Fries has been slinging french fries from their truck for years. They're served with a variety of spices or poutine style. 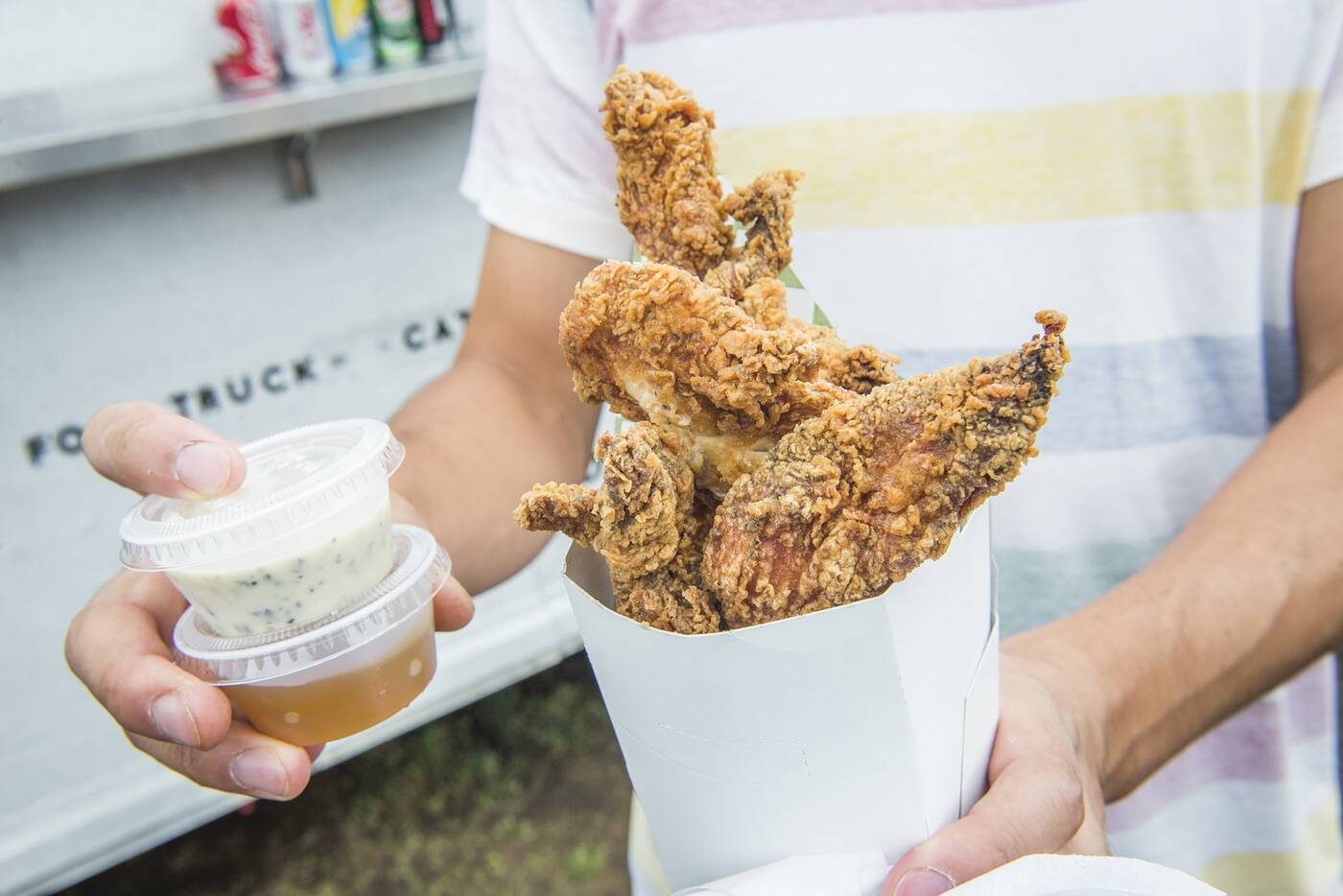 Fried chicken sandwiches and chicken strips are among the many menu items available on the Fully Loaded T.O truck. At events you'll be able to score some of their giant stuffed chicken wings.

Loaded Greek fries, salads and pita wraps are just a few of the options available on the Pappas Greek on Wheels food truck.

When the words grilled cheese are stated one food truck comes to mind, Gorilla Cheese. While the truck may be from Hamilton they frequent the Toronto event scene.

Tdots Naansense brings Indian cuisine to the streets of Toronto. A must-try menu item is their deep fried butter chicken mac and cheese. 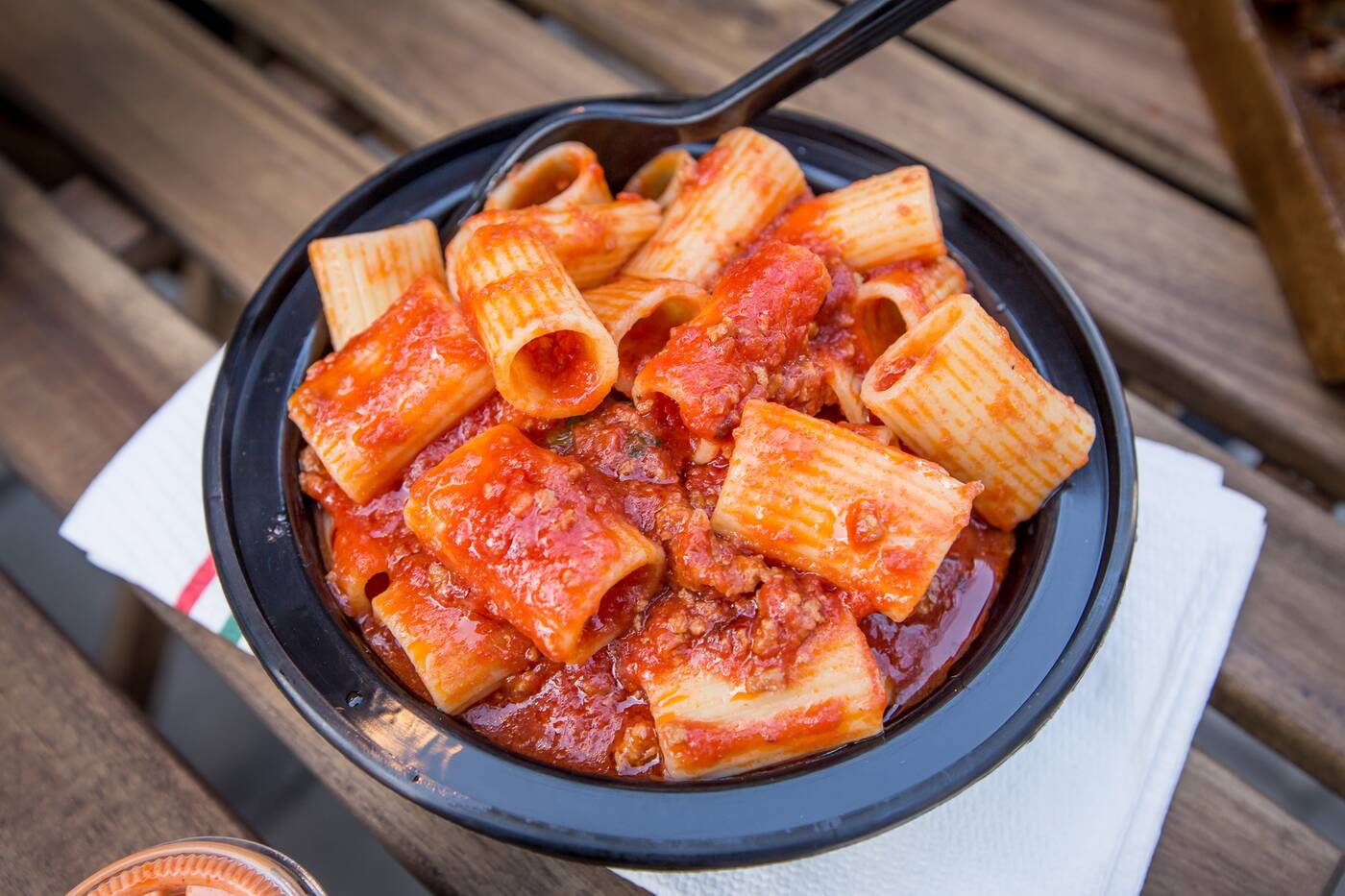 Traditional Italian fare is what the Pronto food truck does best. They boast a rotating menu of pastas, zucchini fritti and savoury tiramisu.

If you're on the hunt for Latin American comfort food look no further than Que Rico. Chimosa fries and pollo loco chicken sandwiches are just a few of the items available.

If you're looking for Mediterranean cuisine with a twist look no further than Alijandro's Kitchen. This truck is the only one where you can take down a fawaffle, a falafel shaped into a waffle cone.

El Trompo Movil is an extension of the Mexican restaurant El Trompo. Similar to the restaurant they serve a menu of Mexican sandwiches, tacos and street corn.

Fries, cheese curds and gravy are taken to another level on the Wickedly Sinful food truck. They top their poutine with everything from steak and fried eggs to crispy duck skin and kimchi. 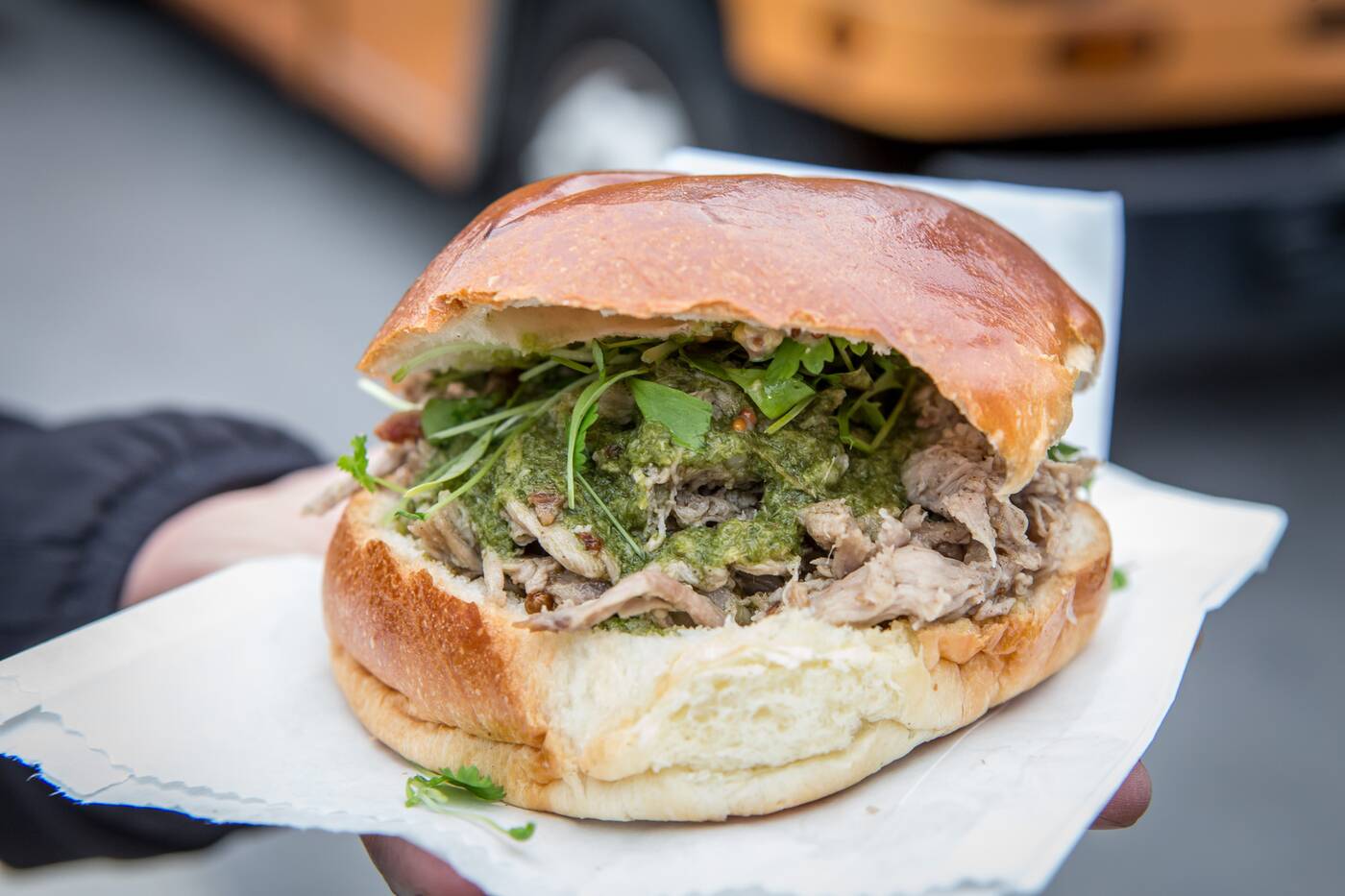 When it comes to seafood one truck stands out above the rest. Buster's Sea Cove is where to get your fill of fish tacos and lobster rolls.

What's food truck season without chowing down on some sushi burritos. Sushiburri is bringing the handheld curbside with services in North York and downtown. 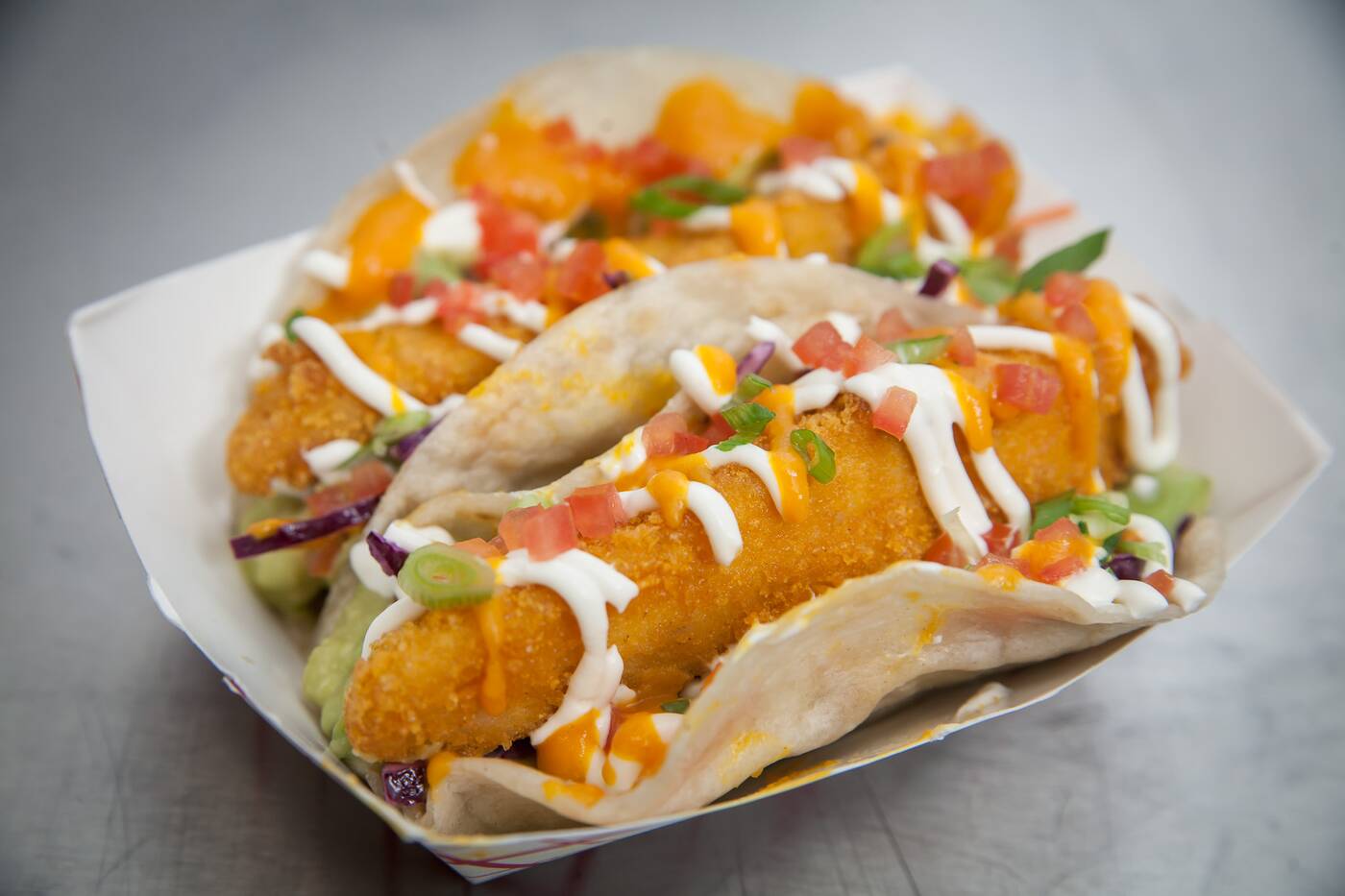 The Arepa Republic is Canada’s first food truck specializing in Venezuelan areas. Get them stuffed with meat, beans or cheese.

The Wafel Bar make Liege waffles and top them with icing sugar and ice cream.

The top 40 specialty food stores in Toronto by neighbourhood