How Scarborough once had the largest McDonald's in the world

Did you know that between 1974 and 1990, the largest McDonald's restaurant in the entire world was located in Scarborough?

It was on the grounds of the Toronto Zoo, more specifically in the African zone, and only lost its coveted title when an even larger McDonald's was opened at Pushkin Square in Russia by McDonald's of Canada, who had learned a lot from their adventures at the zoo.

If you visited the Toronto Zoo in the 70s, 80s or 90 chances are you ate there, and might have some strange memories of unique food items they served.

There were in fact two restaurants - one in the North American zone, one in the African zone - and three snack bars, selling an eclectic blend of the classic McDonald's menu, and a modified Zoo menu.

In 1974, McDonald's of Canada had beat out 84 other bids for exclusivity to sell food on the Zoo's property, however there were many conditions which forced McDonald's to significantly up their game.

Up until this point, McDonald's (especially in the U.S) ran a fairly cookie cutter franchise - burgers, fries and milkshakes were the mainstay of the brand. 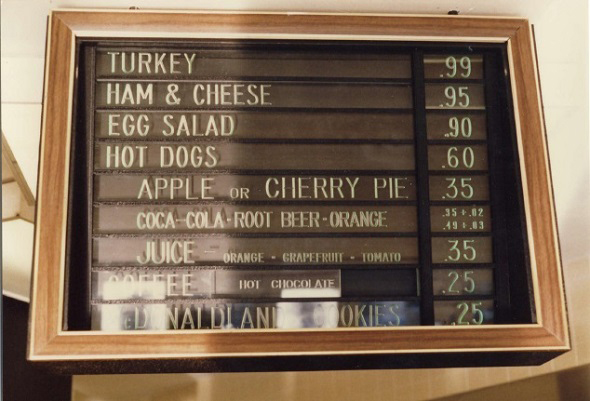 The menu at McDonald's at the Toronto Zoo.

Part of the contract with the zoo involved the operation of snack bars, something which McDonalds had never done.

It was a bold new challenge for the company, as the snack bars were outside and therefore had no kitchens. What could they possibly serve to the hungry zoo visitors? 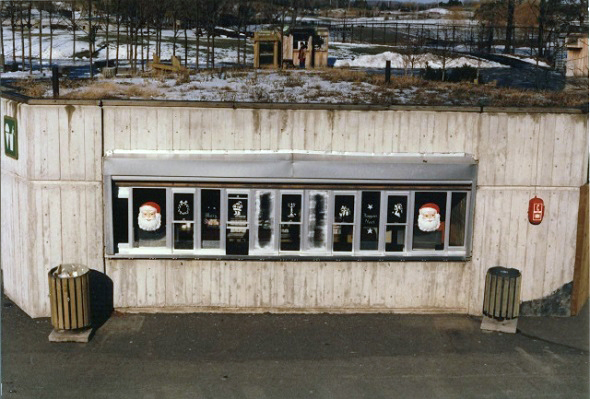 McDonald's at the Toronto Zoo.

The McDonald's snack bar menus have attained somewhat of a cult status among those lucky enough to have visited the zoo during those decades.

The hotdogs in particular were delicious as McDonald's maintained their commitment to using only 100% beef (like their hamburgers).

Soft serve ice cream, now ubiquitous at all McDonalds, actually had its debut in the African and North American restaurants. 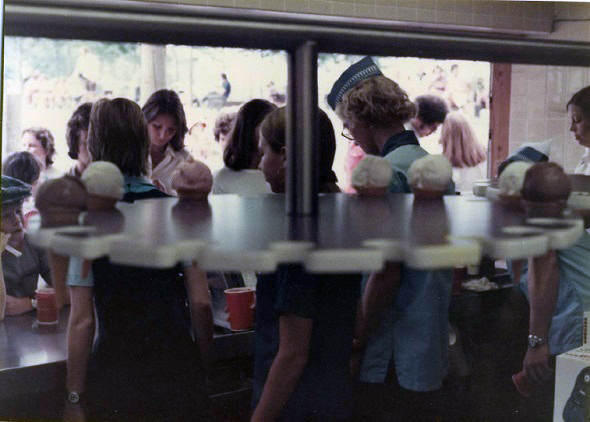 Inside the McDonald's which featured 10 flavours of hard scooped ice cream.

Due to the high volume of customers, both the African and North American zone restaurants required major firepower in the kitchens to keep up with the flow of guests.

The African zone McDonald's had at the time a totally unheard of 24 cash registers. The zoo was a seasonal business, something else which was completely new to the McDonald's business model.

In addition to the new menu items, McDonald's also had to modify some of their standard business practices.

As the safety of the animals was paramount, no straws were allowed on the premises, nor plastic lids (no ketchup packets either). This vastly increased the cost of doing business, while the price of the food had to be the same as it was in regular locations. 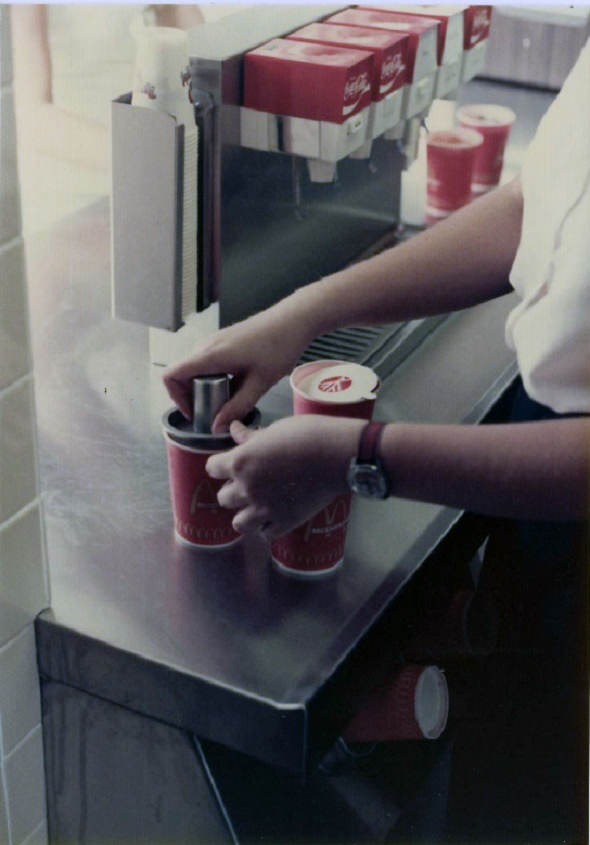 Soft drinks at the McDonald's at the Toronto Zoo.

Probably the most glaring change for McDonald's was the low-key branding - there were no golden arches on display.

The workers wore the standard uniform, but there were no McDonaldland characters, or playgrounds, or the usual signage you associate with the brand. 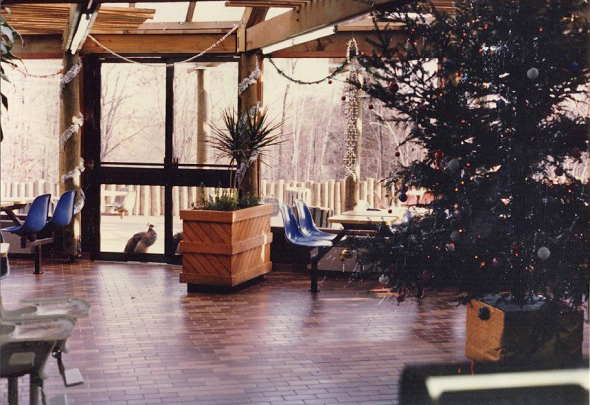 McDonald's had a successful 30 year run at the Toronto Zoo, but their contract was not renewed and the restaurants and snack bars are now operated by a mixture of companies including Smokes Poutinerie, Pizza Pizza, Beaver Tails and Tim Hortons. 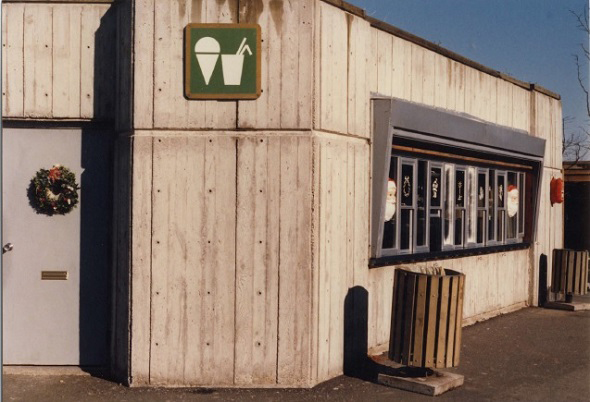 The McDonald's snack bar at the Toronto Zoo.

McDonald's of Canada carried their learnings from operating at the zoo into their biggest endeavour at the time, the opening of a massive restaurant in Pushkin Square, Russia in 1990. All of this was thanks to the vision of George Cohon, the founder of McDonald's Canada.

In addition to accommodating the challenges of the zoo, taking it into Russia, and evolving the McDonald's brand into something much more robust, Cohon was also responsible for helping to save the Toronto Santa Claus Parade in 1982. 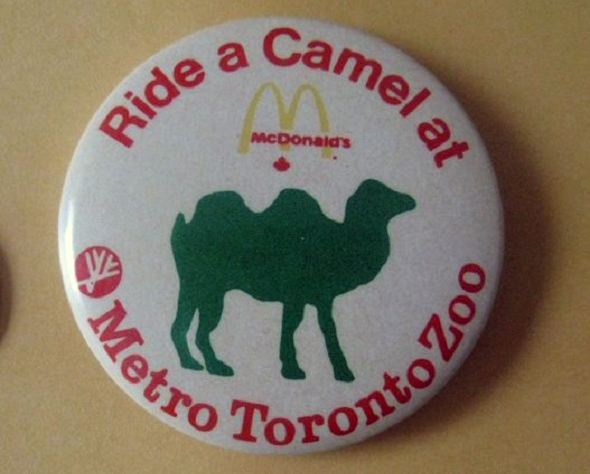 A McDonald's pin promoting camel rides at the Toronto Zoo.

Like the Monorail, McDonald's played a huge part in many people's happy memories of visiting the Toronto Zoo between the 1970s and 1990s, as anyone who remembers those tasty McDonald's hot dogs will attest.