The top 22 steaks in Toronto by neighbourhood

Steak is big in Toronto, even if the city might embrace the moniker Hogtown. While the old guard steakhouses specialize in splurge-worthy cuts, you'll find some more modestly priced options all over the city at French bistros and other casual restaurants.

Here are my picks for where to get a great steak in Toronto by neighbourhood.

Head to Le Paradis if you're looking for a great steak at a reasonable price. The Bavette aux Echalotes ($21) is a flank grilled with a shallot demi glace. It comes with frites.

Carmen's is an historic Toronto steakhouse that is the place for prime cuts (try the 14oz Canadian ribeye for $52) and an abundance of classic sides including asparagus with hollandaise, mashed potatoes, and truffle fries.

Allen's isn't just a great destination for burgers. Among their dinner specials you'll find their 10z striploin steak cooked on their charcoal grill and served with gorgonzola butter.

Cluny is a massive French bistro where steak frites is a staple on the menu. Served with lemon garlic aioli and fresh cut frites, the menu offers affordable options like an 8oz hanger steak for $25, and a 10oz striploin for $36. 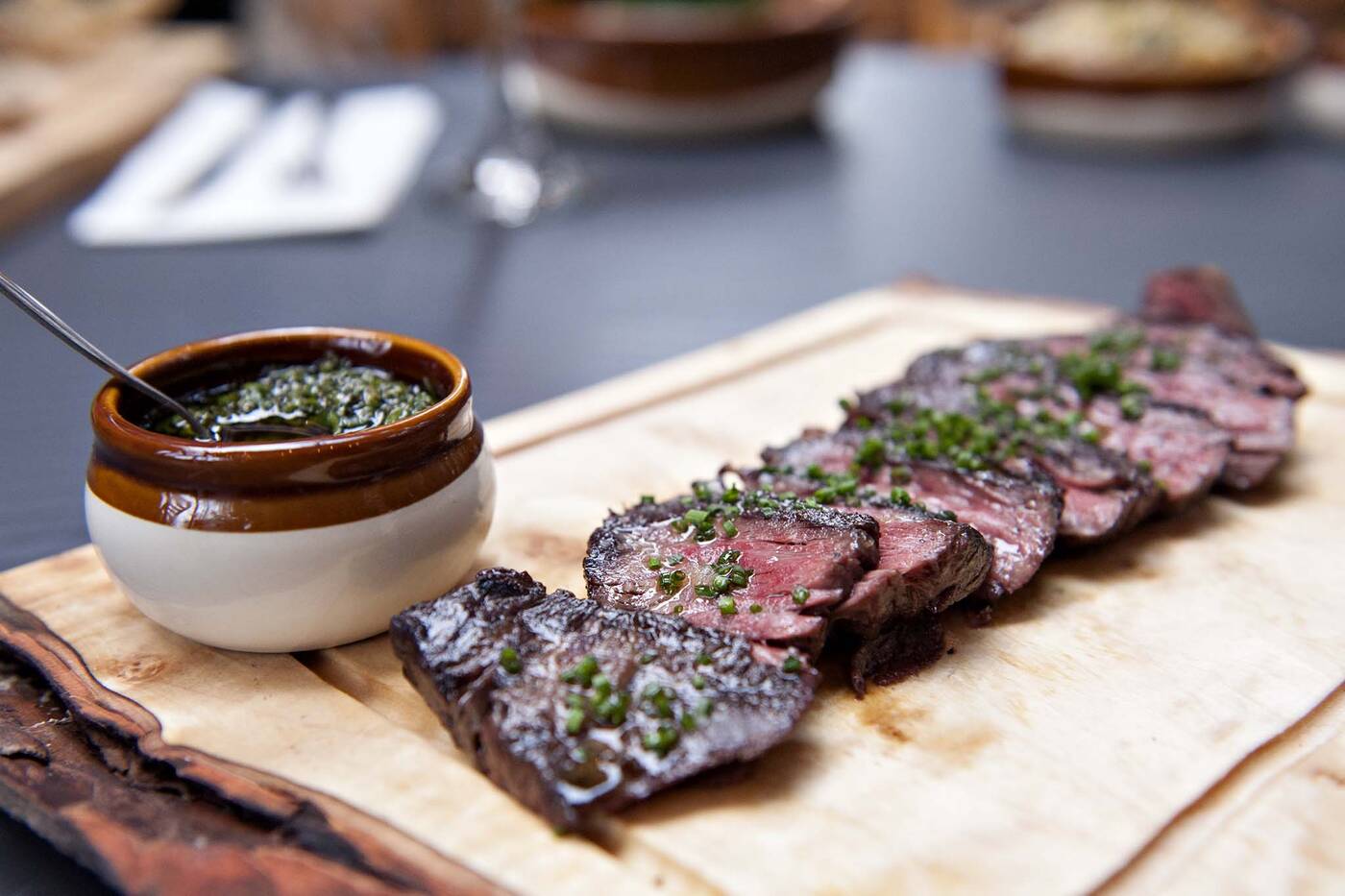 Steaks are slathered in a garlicky chimichurri at Branca. Photo by Morris Lum.

The main attraction at the Argentinian grillhouse Branca is the selection of meats from the grill. The skirt steak ($24) is an 8oz inside cut, seasoned and char-grilled. If you're looking for something more substantial there's always the 48oz tomahawk ($140).

Classic steak frites ($32.50) is what you'll find on the menu at the French bistro Merlot. It's a New York striploin with maître d’hôtel butter and fries.

Hy's Streakhouse is where Bay Street traders and big spenders go to blow big bucks on fat cow. Pair the steak and lobster ($71.75) with some delectable sides.

Near the waterfront, Harbour Sixty Steakhouse is a premiere destination for surf and turf along with top shelf steaks including a double porterhouse ($160) and marbled Japanese Kobe ribeye (MP). Suggested add-ons include king crab, Atlantic lobster or jumbo prawns. 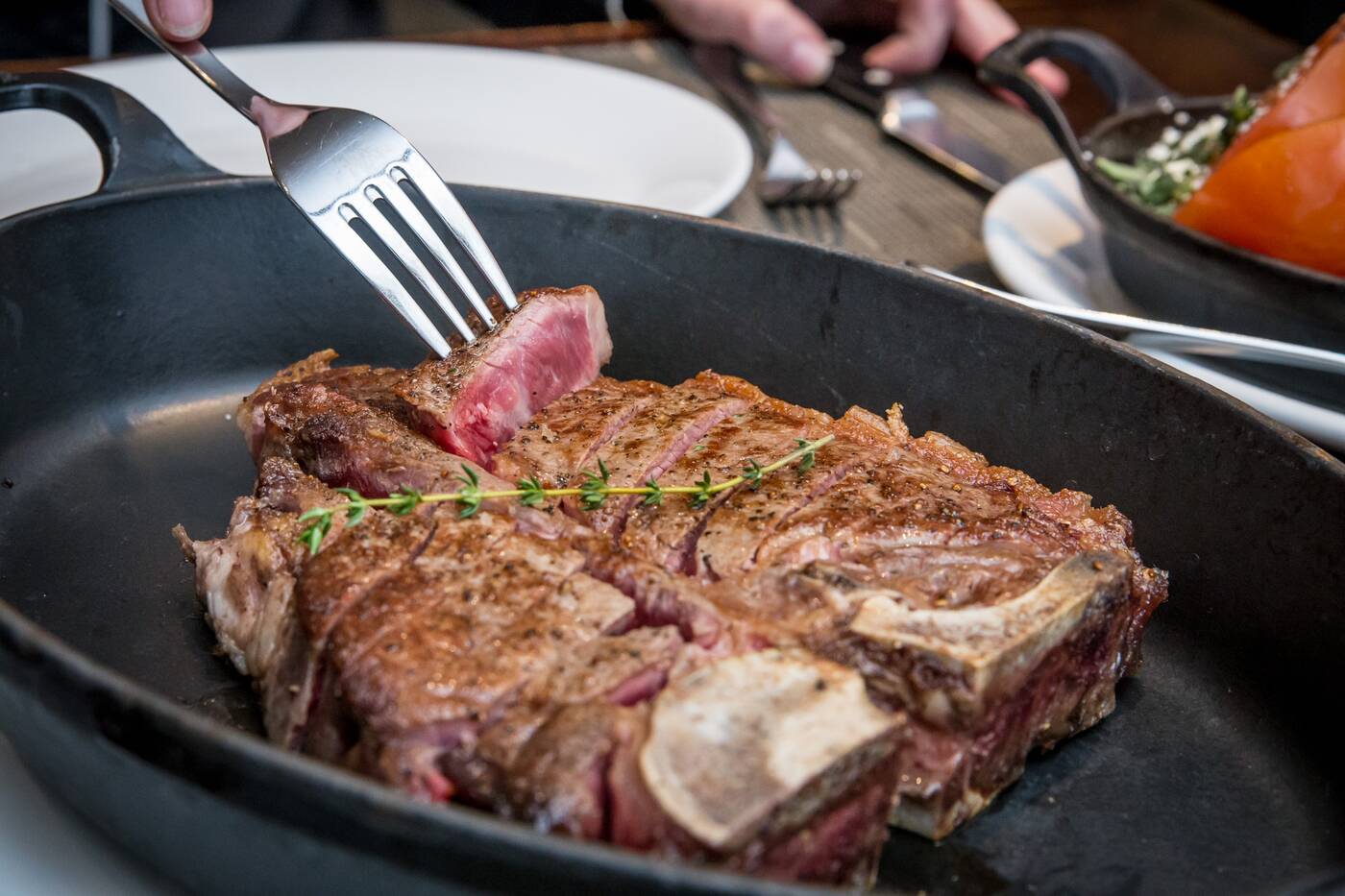 Jacobs & Co is one of Toronto's top steakhouses. Photo by Jesse Milns.

Expect to splash out when dining at Jacobs & Co., the distinguished steakhouse that attracts hockey players, celebs and suits. Top cuts of meat (MP) aged in-house are the main draw, while the Caesar salad is among the best in the city. There's also a dozen or so classic sides.

If you like your steak on the leaner side, The Tulip is for you. The 12oz sirloin ($23.95) is juicy, filling and will satisfy all of your meat filled cravings.

Boehmer is your destination on Ossington for a great steak frites. Their Grilled Bavette Steak ($27) is served atop house cut fries and lathered in a chipotle green onion jus.

If you go to Jules Bistro and don't order their cote de boeuf ($64), you're seriously missing out. The platter for two consists of a 24-ounce Angus ribeye, fries, salad and ratatouille.

Aft sous vides a 12oz flank steak for its steak frites ($22) which means you're guaranteed to get a perfect rosy centre and seared exterior. The dish is served with crispy frites and a tangy red chimichurri.

The Ace has been featured on popular television shows like Diners Drive Ins and Dives and that's thanks to their eclectic menu. A real standout is their steak frites ($24) served with red wine jus. 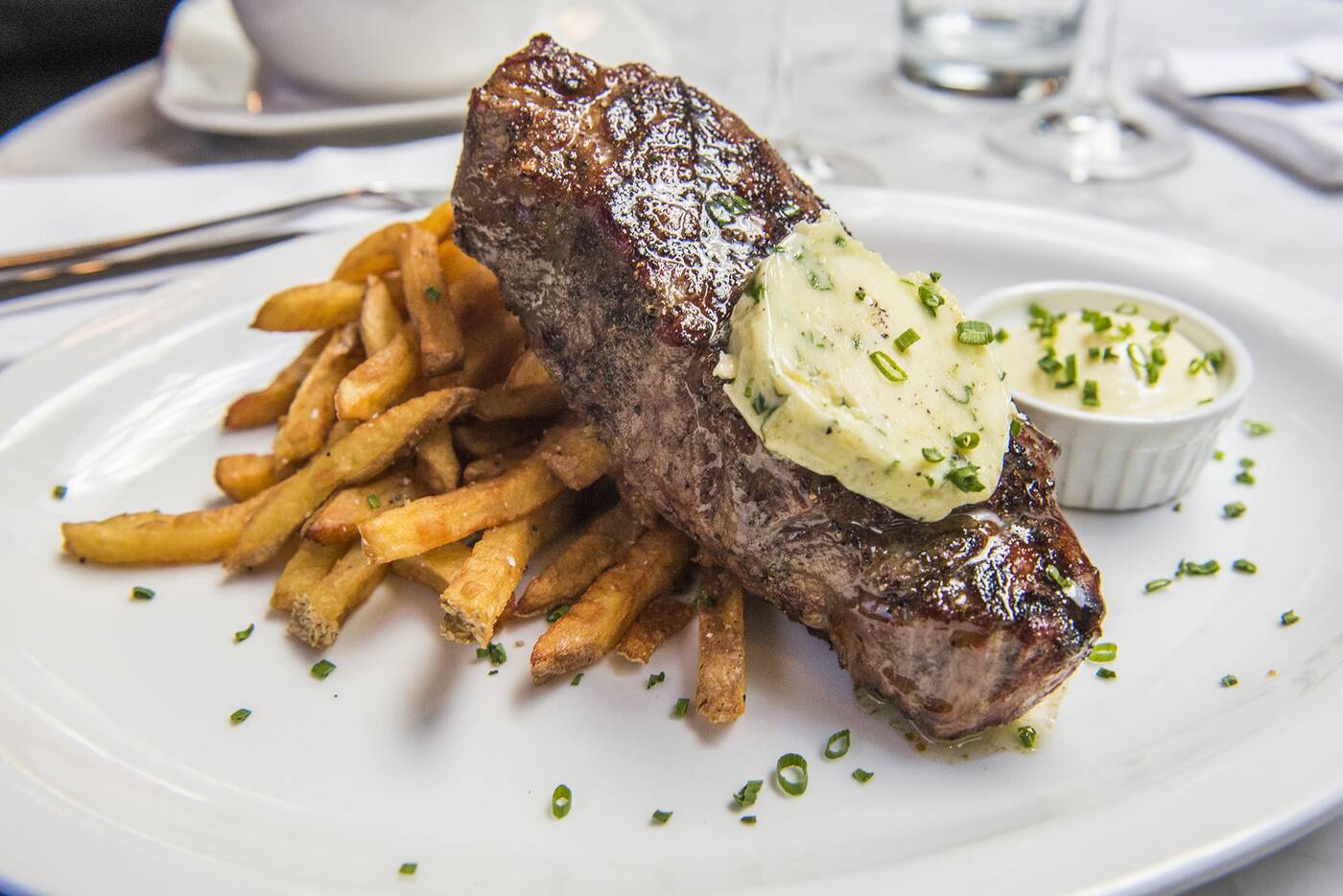 Carens Rosedale knows there's no such thing as too much better on your steak. Photo by Hector Vasquez.

The steak frites ($36) at Carens Rosedale is a must order. Here it comes in the form of a sizable, seared 10oz striploin with a thick disc of herb butter on it, all over top a bed of hand-cut fries accompanied by aioli.

Smith Bros. Steakhouse Tavern specializes in 28-day, wet aged steaks and local craft beers. The steakhouse prides itself as being an affordable option, serving up 7oz. sirloins for $24 and 10 oz. New York striploin for $32.

BlueBlood can be found inside Casa Loma. The space boasts a stunning interior along with a hefty menu of steaks including a centre cut filet ($65/8oz.), a bone-in ribeye ($100/16oz.) and even cuts of wagyu. 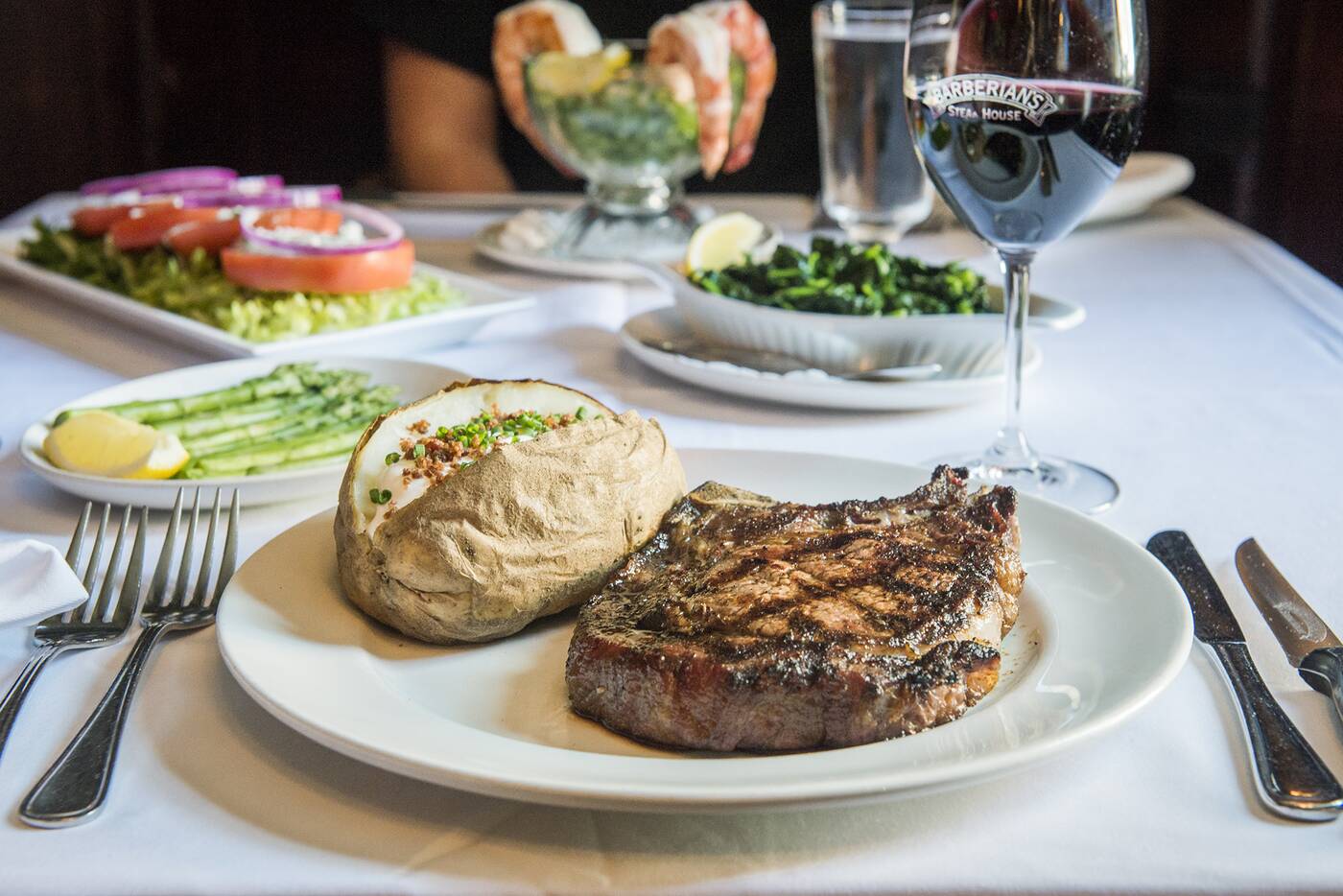 A steak with all the fixins is the way to go at Barberian's Steakhouse. Photo by Hector Vasquez.

Barberian's Steakhouse isn't just one of Toronto's last surviving old guard steakhouses, it's a right of passage. Go for the centre cut top sirloin ($42.50/9oz) but don't miss out on the classic starters including Caesar salad, escargot, and jumbo shrimp cocktails.

Miller Tavern has its very own steak lover's menu. On it you'll find everything from a Kanas City steak ($32/8oz.) topped with sauteed mushrooms to a 14oz New York ($46) strip inspired by Frank Sinatra.

STK is one of Toronto's swankiest steakhouses and has an impressive menu of grilled meats. Steaks are available in sizes of small, medium, large and extra large - that's where you'll find their dry aged porterhouse.

Hector Vasquez at STK. With files from Liora Ipsum.