The CityPlace Farmers' Market launched its first full season this June after a few successful trial markets last fall. The market is one of four MyMarket certified local farmers' markets throughout the city, put on with support from the CityPlace Residents' Association. It runs every Tuesday from 3:30-7:30pm until October 15th at Canoe Landing Park, near Spadina and Fort York Boulevard.

CityPlace may not seem like your typical farmers' market setting. This glass and concrete jungle of massive towers and never-ending construction has been celebrated as an urban planning success story, but also condemned as a future ghetto that lacks a community feel. 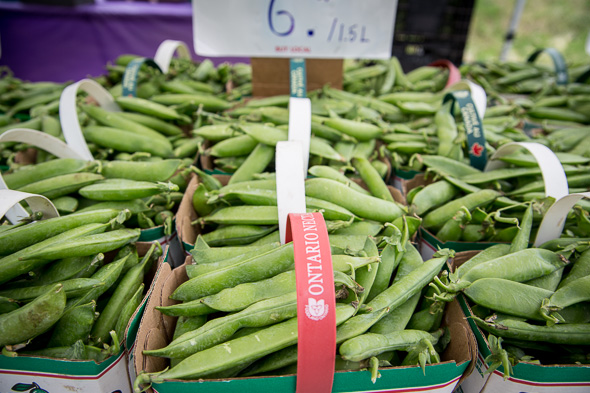 Yet, I was pleasantly surprised by the sense of community during my visit to the market one sweltering afternoon (although the lack of shade was less than ideal). Market-goers included, as expected, single professionals walking their tiny dogs, but also young families and seniors. Regular shoppers chatted with their favourite vendors and neighbours caught up, while kids splashed in the colourful water fountains nearby.

MyMarket representative Leehe Lev says that the arrival of Toronto Community Housing units has brought more families with kids to the area, and the market hopes to offer more children's programming in the future.

While the CityPlace Farmers' Market is small--less than 10 vendors during my visit--it has a solid selection of produce, meats and baked goods, including organic and biodynamic options.

Here are some fave vendors from my recent Adventures in Condoland. 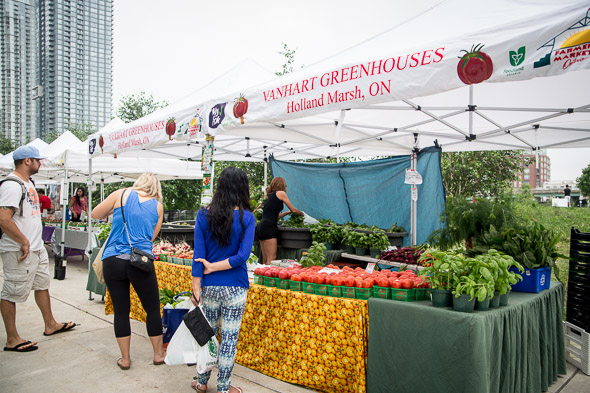 VanHart Greenhouses
VanHart's stand lured me in right away with its abundance of colourful organic veggies, including heaps of golden and red beets ($3/bunch), bins of vibrant salad greens ($3/bunch), and baskets of multicoloured heirloom cherry tomatoes ($5/pint). Amanda VanHart told me her father Ron started farming organically over 22 years ago, after his father and uncle died from working with pesticides. Amanda has worked at the Holland Marsh farm for 10 years, and is "going to take it to the next level," with ambitions of also selling prepared foods and operating a food truck in the future. This season's harvest of organic veggies also includes zucchini, radishes, Brussels sprouts, broccoli, onions, beans, and an impressive 25 different types of tomatoes.

Blackbird Baking Company
This Toronto-based bakery operates out of SOMA Chocolate near King and Spadina, and sells its handcrafted organic breads at the CityPlace Farmers' Market as well as Sanagan's Meat Locker in Kensington and Leslieville's Hooked. The bread is simply beautiful--golden-brown loaves and baguettes with a dusting of snow white flour--and would make the staunchest low/no-carb dieter question such a silly life choice. The baked goods for sale during my visit included sourdough baguettes ($4),Toronto sourdough loaves ($6), and multigrain loaves ($4.50). Based on owner Simon Blackwell's suggestion, I sampled their popular Pecorino Bianco, a savoury and moist bread with a fragrant mix of parsley, rosemary, and oregano, accompanied by a perfect touch of sea salt ($5.50). No surprise it was sold out less than halfway through the market. 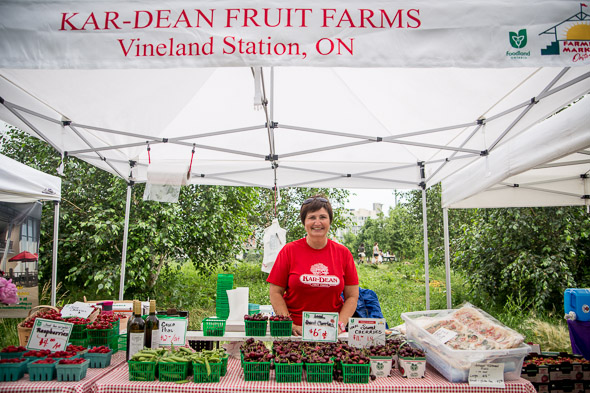 Kar-Dean Fruit Farms
"I'm the 'Kar' in Kar-Dean," Karen High warmly explained when I stopped by her stand to chat. I couldn't help but take a few moments to admire her plump cherries, blackberries, currants, plums and apricots, showing off their vivid colours under the bright summer sun. It was particularly hard to resist grabbing a quart of orange apricots ($6) or some cheerfully yellow plums ($3/quart). Karen told me her husband, Dean High, is the third generation of farmers running this family operation in Vineland Station, Ontario. This season will also bring heirloom tomatoes, peaches, nectarines, and pumpkins. 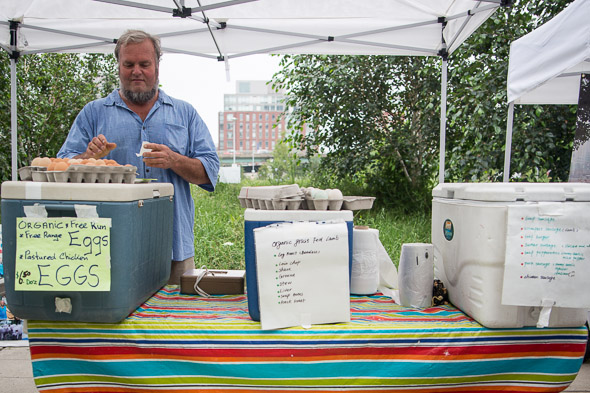 Bio Vision Farm
This certified biodynamic farm in Grand Valley sells 100% grass-fed beef, lamb, pork, chicken, and eggs, with an impressively wide range of cuts and meat products. The long list of meats available include whole chicken ($5.50/lb), steaks ($19/lb), beef burgers (4/$12), as well as sausages, bacon, beef bacon, and salami. It's clear that farmer Henricus Verhoeven strives to use as much of the animal as possible without waste, selling parts like tongue, heart, liver, oxtail, and bones for soup (or as a treat for your four-legged friend). A (biodynamic) meat-lover's dream. 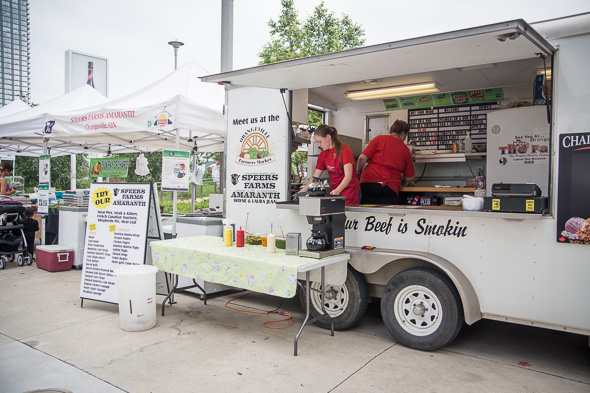 Speers Farm Amaranth
"Well then you could guess my age, couldn't you?" farmer Wayne Speers quipped when I asked how long he's been farming. Speers has been raising beef his whole life, and currently has about 70 heads of cattle on his Amaranth, Ontario farm. The range of hormone- and antibiotic-free beef products for sale includes steak ($5-$23/lb), roasts ($5-$14/lb), sausages ($8/lb), and patties ($5.25/lb). Speers also sells pork and chicken from nearby farms, as well as meat pies. At the end of the work day, however, it was the Speers food truck that was drawing a crowd, with the irresistible smell of hotdogs, sausages, and peameal bacon sandwiches wafting through the air.