Summer beer festivals in Toronto present only one problem â because there are so many to choose from, keeping track of them all actually becomes difficult. And, let's face it, you've already got enough on your plate â what with picking out the the right tank top and sunglasses to wear while you patio-hop to kill the time between beer festivals.

So, to take some of the stress out of our collective beer-drinking schedules this summer,
I've compiled a list of the various beer festivals happening in the city so that the biggest decision one has to make is whether or not those slick Wayfarers clash with flip flops.

Toronto Beer Week
What: By their own admission, the organizers of Toronto Beer Week are "dedicated to the celebration and advancement of the craft beer movement" so don't expect too much Bud Light or Stella. Instead, the week is actually hundreds of events related to locally made craft beer ranging from beer dinners, tasting events, and homebrew competitions. As the week approaches be sure to check their website for an updated list of events and participating venues.
When: September 13 - 21
Where: Various venues across the city.
How much: Costs vary per event
Pro: There are multiple events happening each night of the week so you're sure to find something going on nearby.
Con: There's so many events to choose from it can actually be overwhelming deciding which to attend (We've got you covered though. BlogTO will share our picks for the best bets as TBW approaches).

Ontario Craft Beer Week
What: The fourth annual tribute to Ontario's independent brewers now features over 30 Ontario Craft Breweries pouring local brew at 150 events in over 50 different Ontario communities. Festivities will include food and beer collaborations, tap takeovers, tasting events, brewery tours, cooking demonstrations, beer dinners, contests and more. The week prior to the festival, we'll feature a comprehensive guide to the events occurring right here in Toronto during the week.
When: June 16 - 23
Where: All across Ontario
How much: The cost of events varies.
Pro: It's 150 beer events across the province! There's going to be at least a few you're interested in.
Con: You might have to take the week off work so you can fully enjoy all the events in your area. 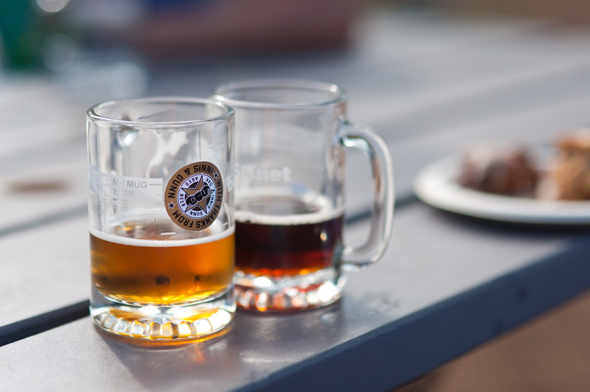 Session Craft Beer Festival
What: What started as the unofficial close of Ontario Craft Beer Week has become an event in and of itself. This year, Session (formerly Session 99) has moved venues and will take over the Artscape at Wychwood barns for an evening of live folk music, a selection of food trucks, and, obviously, a great selection of craft beer.
When: June 22
Where: Artscape Wychwood Barns
How Much: A $50 ticket (plus $2 for "handling") gets you in the door for the 4pm-9pm event and includes a sampling glass and all your beer samples.
Pro: The event features a showcase of collaboration beers made with local celebrities, including Tom Green, Ed the Sock, and the current cast of The Second City.
Con: You'll need to brave the "St. Clair disaster" to get there. Oh no!

Muskoka Beer Festival
What: If you're headed to cottage country this summer, check out this outdoor celebration featuring 20 craft brewers as well as wine, cider, and food.
When: August 25
Where: Annie Williams Park, Bracebridge, Ontario
How much: The ticket is $45.20 but includes your sampling and access to all the beers on hand.
Pro: You now have access to a great selection of craft beer even though you're at your cottage.
Con: You don't have a cottage.

Toronto's Premium Beer Experience
What: Our pick for one of the more interesting beer events of the summer, this one promises a "renaissance of the modern day beer festival" and boasts that all the brewers involved will be brewing something unique specifically for the event ot will be bringing a brand new beer.
When: September 12
Where: Berkeley Church, 315 Queen St East
How much: Tickets are $17 and sample tickets will be $1 each.
Pro: New, never before seen beers!
Con: New things can be scary.

The Roundhouse Craft Beer Festival
What: A selection of Ontario beer poured in a casual setting with food from some Toronto food trucks
When: August 10-11
Where: Roundhouse Park, 255 Bremner Boulevard
How Much: Details aren't yet posted, but last year it was $10 online and $15 at the door with $1 sample tickets.
Pro: The "ticket" for this event last year was your glass, which meant in and out privileges and even returning for day two without a second ticket fee.
Con: Last year their was far less food than you might expect at an event advertising "Toronto's best food trucks."