The Eephus pitch in baseball is an extremely rare junk pitch. It's a high-arcing, impossibly slow pitch that sometimes crosses the plate at speeds as low as 50mph. Of the pitch, Pittsburgh Pirate Maurice Van Robays once said, "Eephus ain't nothing, and that's a nothing pitch."

When you learn that this rare pitch was the inspiration for the name of one of the beers brewed by Left Field Brewery, you'll start to appreciate the philosophy of Mark and Mandie Murphy; the company's co-founders and sole employees, whom I spoke to recently about being Toronto's newest microbrewery, and the first one to embrace baseball puns.

What are your backgrounds? How did Left Field Brewing come about?

Mark: "It was an idea I had at least three years ago when I started attending the Niagara College Brewing program [as part of the very first graduating class] and I've always been a huge fan of baseball. I've been a chartered accountant and right out of school I worked at Molson, but I always wanted to work for myself, and I finally just took the opportunity to combine two passions."

Mandie:"I'm a marketer. I worked in beverage alcohol before, but I don't currently. I used to manage Grower's cider, I worked there for a couple years, then I worked for a number of different industries and I've managed a number of brands since."

Where did the beer ideas come from?

Mandie: "The concept of the brewery started by brewing beers we like to drink. These are recipes that Mark's refined through homebrewing."

So you've just been drinking your own stuff then decided, "Hey, I could sell this?"

Do you have any accounts lined up? Where can people try your beer?

Mark: "barVolo already asked for it, Tequila Bookworm already asked for it [Since I met with them, Mark confirmed that he's delivered Eephus to both these locations. Go get some!] We actually had a handful of bars approach us before we even had beer."

It's kind of nice that the craft market in Toronto is such that bars are actually approaching people who have something new to offer.

Mark: "Even Pub Milos [in London], they contacted me. They're willing to drive all over Ontario once a month just to pick up beer. That's kind of nice."

That's sort of a double-edged sword, isn't it? On one hand beer bars like to support the new guys, but in six months they could say, "Nah we're not interested, we've already had that here."

Mark: "Yeah, it's ironic but it's actually hard for the guys who have been around for ten years and who only have core brands. They're invested in these brands that they need to keep the lights on and don't have as much time to play around and evolve."

Mandie: "To some degree, while we see advantages with having flagships or go-to brands, we think there's maybe even more opportunity with continually offering new and interesting styles."

So these aren't your core brands, these are just kind of your first out of the gate beers?

Mark: "Yeah. The market will decide. I'd love to have one-offs and stuff throughout the summer. We're going to be at the Toronto Festival of Beer. People are already throwing out tons of baseball-related names for one-offs."

Mandy: "There's no shortage of baseball puns available--which helps, and the type of person who would be drawn to our brand seems to always be looking for the next new thing." 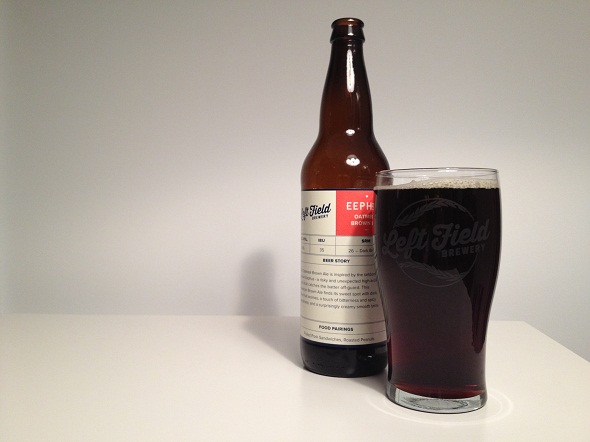 You're contract brewing right now, but hoping for a Toronto headquarters some day? How's that search going, or is it even going on at all yet?

Mark: "Yeah, we're at Grand River Brewing [in Cambridge] but the Toronto brewery is on the back burner. We want to launch and get out there. Right now it's just the two of us but further down the road when we have an established brand and some volume we'll be able to approach investors once we have experience and some numbers behind us. I didn't want to make up things and say 'Here are my projections' when we don't really know."

That seems to be the way things are going. Contract brewing for a bit, building up some capital then looking for a location.

Mark: "Yeah. But my ideal brewery is something with a 20 hectorlitre system in East York. Because that's where we live."

Mandie: "And there's a growing beer community in East York--a number of bars supporting craft beer--but brewing-wise there isn't a lot going on. Mill Street is in the East, and now Amsterdam is up in Leaside, but compared to the West End, it's still extremely underdeveloped. Danforth, Danforth East, Leslieville, and the Beach--there are lots of craft beer fans without a neighbourhood brewery of their own."

Mark: "But we don't want to be the three barrel local. We'll wait until we can do something full scale."

Well you have an interesting hook. Whereas the trend seems to be to associate breweries with neighbourhood, you guys have opted to be baseball themed.

Mark: "Well that was a worry, maybe some people don't like baseball but--"

Mark: "Ha! No. I mean, maybe everyone doesn't identify with Kensington or Bellwoods or Liberty Village. We love what all those guys are doing, but we wanted something more universal."

Mandy: "Everyone [in the brewing industry] is incredibly supportive and collaborative and we honestly couldn't be doing what we do without the help, advice, and support from a bunch of great people in the industry. We have huge respect for the other craft brewers out there but we're all approaching it a little bit differently.

We also like the idea that baseball gives us a possible inroad into the United States. It's not part of the plan right now, but maybe someday down the road."

Left Field Brewery's beers are available exclusively in a handful of bars here In Toronto. Look for the Eephus Oatmeal Brown Ale now and expect the 6-4-3 double IPA and the Maris American Pale Ale in a growing number of the city's beer bars soon. You can also attend their aptly named "Home Opener" on Friday April 5th at 3030 Dundas West at 7:07PM --handily lining up their official launch with the opening pitch of the Jays / Red Sox game that is occurring that evening. All three Left Field Brewery offerings will be on tap, there will be $5 plates of "ballpark food," naturally the game will be on, and the evening will close out with soul music.

Top photo by Mark Horsley. Additional photo by the author.