Mill St. does Robbie Burns proud with food and brews

While a standard tribute to The Ploughman Poet typically involves consumption of Scotland's eponymous beverage, this year, as with last, I opted to forgo the more traditional drams of scotch and instead enjoy a Robbie Burns Supper with the folks at Mill Street Brew Pub.

As one might expect, along with attention to some traditional touchstones--Burns' poetry, haggis, bagpipers--the draw of the Brewmaster's Burns dinner at Mill Street is the beer; five beers, actually, one paired with each course of the meal. And as I learned last year, part of the fun of the banquet-style dinner is hearing the thoughts of those nearby on the beers, and so, when we sat, I checked the place-setting name cards to see who I'd be talking beer with for the evening and noted that to my left would be "Joel Manning."

Yes, I'd somehow been seated next to Mill Street's Brewmaster, Joel Manning, former president of the Canadian Brewing Association, and a brewer for almost 25 years. My notes on the beer then better be on point. 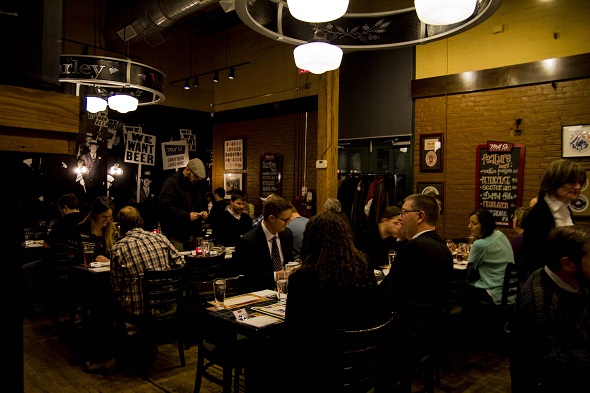 I was also joined by Mark, who shall heretofore be referred to as "T-Bone," because that's what he asked me to call him, and my photographer Paul, who always has interesting things to say about his beverage. In the interest of being thorough, I've included T-Bone's and Paul's thoughts on each beer, as well. 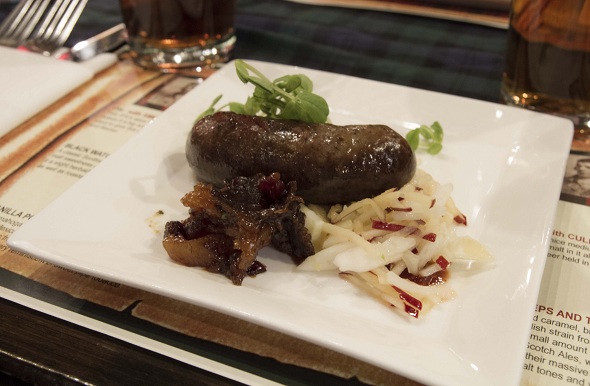 The food: Smoked duck sausage, served with what I'll call an apple salsa (a detailed menu wasn't available) and a cranberry chutney.
The beer: Mill Street IPA
The verdict: Though Manning explained the history of IPAs to the assembled revellers as a high-alcohol, hoppy beer brewed to endure the long voyage to India, this version fell a little short of that big flavour. In an Ontario industry fairly flush with hop bombs at the moment, this relatively tame 6.5% ABV IPA doesn't really stand out.

What it does have going for it is some uniquely traditional terroire. That is, this Ontario-made IPA has the distinction of being made with English yeast, British hops, and British yeast. As Manning noted, the only thing Canadian about it is the water that was used. It's a perfectly nice little IPA, but don't expect fireworks.

T-Bone's thoughts: "It's hoppy, but not enough legs to get to India."
Paul's thoughts: "Yum. It reminds me of going to someone's garage workshop in Newfoundland. Sawdust." 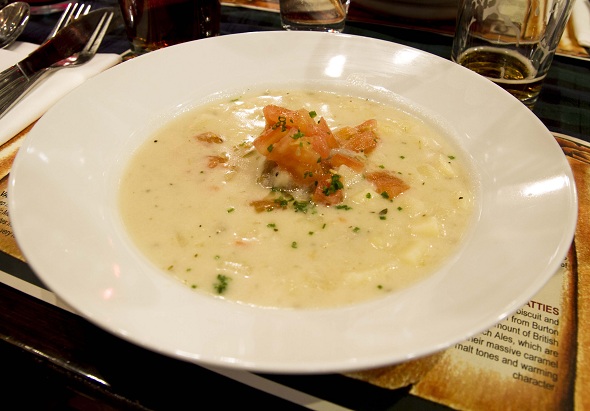 The food: Cullen Skink, a traditional thick soup made with smoked haddock, potatoes, onions and, in this one, tomato.
The beer: Father John's Ale, a southern English ESB
The verdict: Manning first brewed this beer in 1993. It was born out of an attempt to impress Manning's soon-to-be father-in-law, John. It was a pale amber colour with considerable Czech aroma hops, making it a fairly floral beer with big and semi-sweet flavour. As Manning's father-in-law noted on first trying a pint, "It's a beer a man can take his coat off to."

T-Bone's thoughts: "This is hoppier than the IPA. Rounder. Fuller."
Paul's thoughts: "Mmm. Reminds me of something. I used to pick wild strawberries with my cousin, but they'd always be in a field of grass somewhere by the bay." 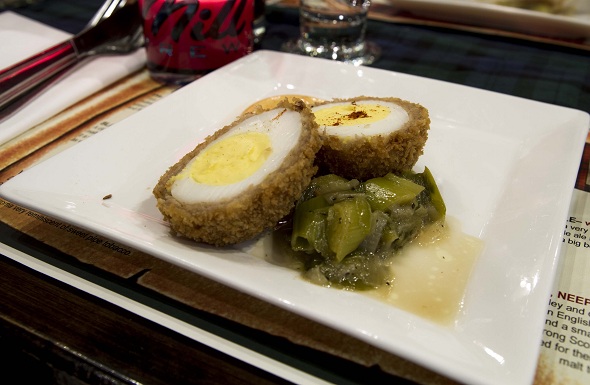 The food: A traditional scotch egg.
The beer: Black Watch Scotch Ale
The verdict: This was a great, traditional, mahogany-coloured pub ale that had a caramel aroma with a little smokiness, and a nice taupe head. The taste had notes of coffee grinds and roasted malt, but with a subtly bitter finish. This was definitely my pick for the best beer of the evening.

T-Bone's thoughts: "This is a lovely, complex beer. Dark and slightly bitter; goes awesome with a scotch egg."
Paul's thoughts: "I don't mean this to seem negative, but for some reason I'm reminded of the bathroom at Hard Luck. The toilet was constantly flushing and the door was very narrow. This beer reminded me of that. Very interesting." 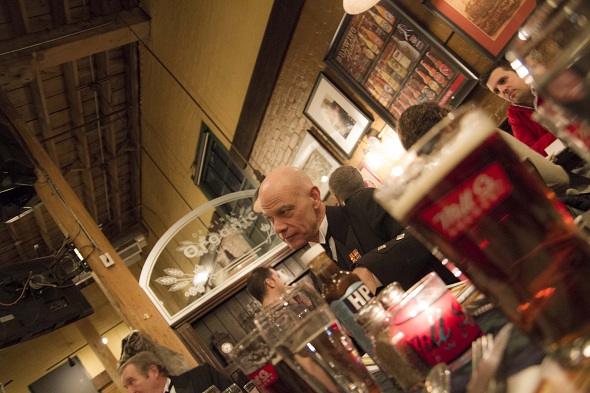 I managed to display some level of beer nerd cred at this point when, upon hearing the tasting notes that Joel Manning offered the room regarding the Black Watch Scotch Ale, I let him know that I was tasting none of the things he pointed out and suggested that perhaps he had given his notes regarding the Tartan Ale, which was next up, instead. This was in fact the case. Aside from T-Bone, no one else in the room seemed to notice. To test the room's level of attention, Manning and I discussed the idea of him taking the mic with a bottle of absinthe in hand and offering tasting notes for Mill Street Organic just to see if anyone would call him on it. He opted not to do this. 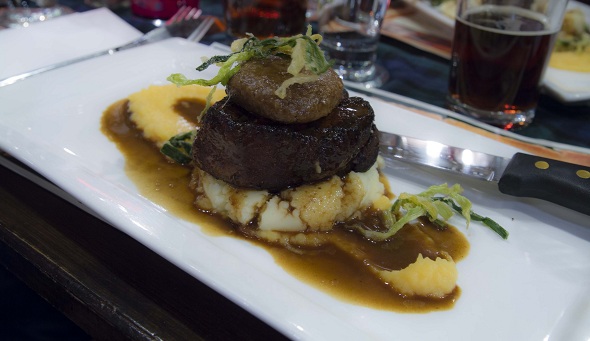 The food: A honking piece of beef tenderloin served with neeps and tatties and a dollop of Haggis.
The beer: Tartan Ale
The verdict: This beer was brewed specifically for Robbie Burns' day at Mill Street's Ottawa location and was a sweet, boozy strong Scotch ale. The aroma has notes of currants and the taste was caramel, biscuity, rich malts with some hints of fruit. It was smooth, warming beer, and well-paired with the main course.

Speaking of warming, Manning let me know that the beer's label was a tribute to bagpiper John Sempill. Sempill had been the official piper for Manning's Burns' dinners until last year, when, upon calling Sempill to procure his services once more, the brewer learned that he had passed away. As a way of honouring him, Manning opted to use the Sempill family tartan on the beer's label.

T-Bone's thoughts: "Sweet yet dark. Slightly heavy, hint of smoke."
Paul's notes: "Reminds me of burnt brownie in a square pan, and my mom is wearing Christmas oven mitts. She's giving me the burnt ones instead of throwing them out. This doesn't taste anything like brownie though." (It's probably worth noting that this is the point in the evening Paul admitted to feeling a little drunk.) 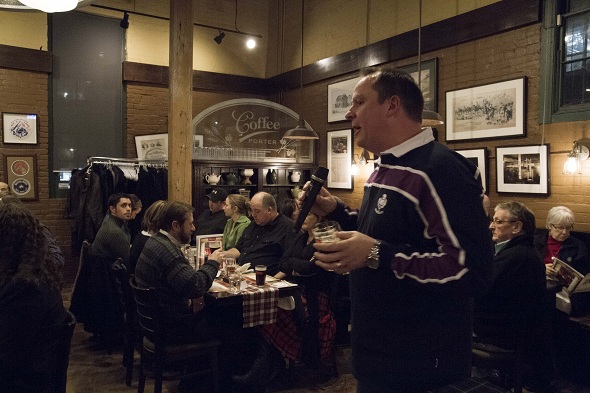 As with last year, this was the part of the evening where Manning delivered a lengthy speech on the importance and cultural significance of Robbie Burns. His enthusiasm for the subject matter was obvious, but fell somewhat short of infectious--through no fault of his own. Quite simply, after four beers and four courses of a large meal, it would seem that nothing short of a live cock fight would have held the attention of the assembled guests, and yet Manning endured.

In fact, there was something quite admirable in Manning's insistence at finishing all five pages of his prepared script, despite an audience that grew increasingly insolent as he progressed. As he noted to me privately, "Someone has to explain why the fuck we're here." I definitely agree with the sentiment, but I also agree with Paul, who aptly noted, "He should really deliver this speech first." 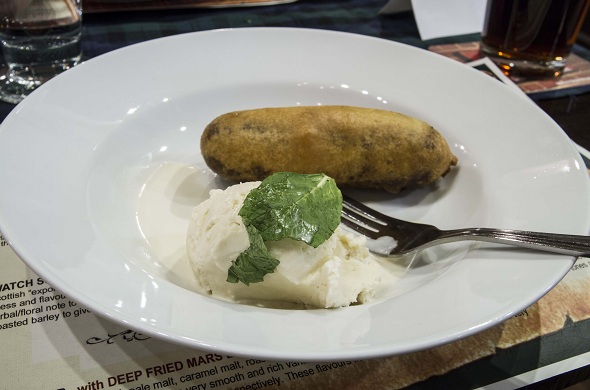 The food: Deep-fried Mars bars and vanilla porter ice cream
The beer: Vanilla Porter
The verdict: Mill Street's Vanilla Porter is one Toronto's great seasonal beer treats. However, while I remember it being dark and rich, the one I was served this year seemed thinner than in previous years. It also seemed lighter in colour. Manning, however, assured me that it was the same as in previous years but, owing to the fact that our glass sizes were less than a full pint, it probably seemed lighter.

Regardless, it was still a very tasty beer with rich roasted malt flavour and obvious hints of the organic vanilla extract that was added. It's a complex, smokey, sweet, and rich brew and beer fans will be happy to learn that we can expect to see it in cans around November.

T-Bone's notes: "Not a traditional porter, but the vanilla finish is light and flavourful."
Paul's notes: "Reminds me of eating chocolate at my aunt's house. I picture a box and her gold couch. That couch was so soft you'd fall asleep instantly." 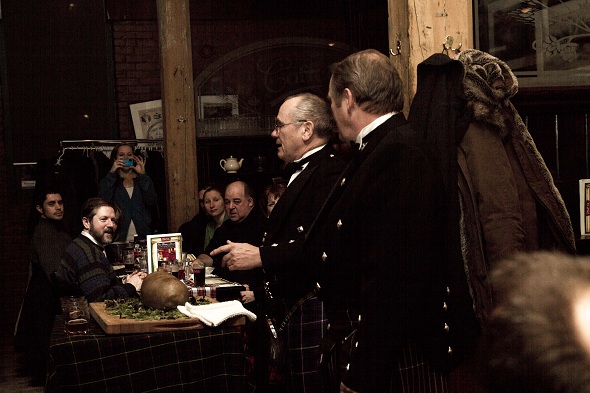 Ultimately, the evening was a great success. The food was fantastic and the beers equally good and well-paired. The tributes to Burns--including the Selkirk Grace, the Ode to a Haggis, and a closing rendition of Auld Lang Syne--were fitting and entertaining. I've even come to see trying to pay buzzed attention to Manning's lengthy speech on Burns' as part of the fun. Because, although most of us gather each year for the novelty of eating haggis, drinking, and listening to the piper, it's important to remember, as Joel Manning did in the opening line of his speech, "Robbie Burns is awesome." 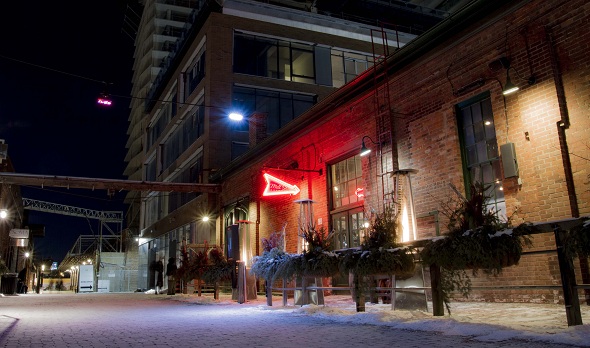