Why sit around and simmer when you can do something about it? On Sunday, thousands of hungry soup lovers toted in bowls and spoons to support Soupstock 2012. The culinary protest featured 200 top-chefs soup creations to bring attention to the proposed Highland Mega Quarry. At $10 for three bowls it was a stellar liquid lunch. Here are some of the highlights. 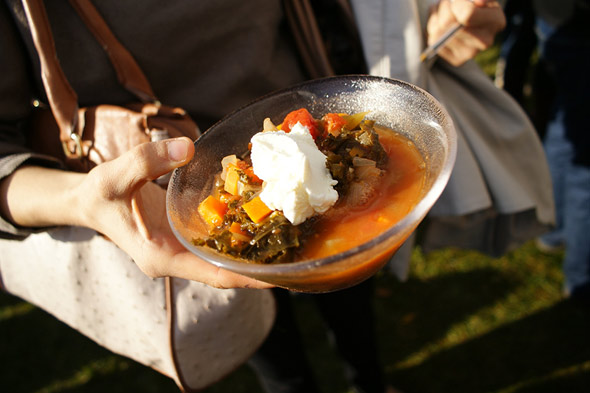 Soup #1 - Ribollita by Crème Fraiche
Soup eating is so much better with bread. This veggie-packed soup was like minestrone with bread cooked right into it. The final dollop of sheep's cheese on top added a tart creaminess. It was by far the heartiest soup there. The only thing I'd say is my bowl had a few extra kale stems, but for a rustic soup it's to be expected.

Soup #2 Corn Chowder by Oyster Boy
I was doing a lot of food gawking at this event. But I zeroed in on the soup that had popcorn kernels floating on its surface. This soup mixed corn, oysters, jalapeno, cilantro and popcorn. It reads like the worst combination of ingredients to mix together, but I could have gone for a second helping. The creamy, sweet corn taste went well with the punch of heat from the jalapeno. And mixing in popcorn wasn't a fluke. It was a genius move. I find oysters to be too slippery and soft. The popcorn added crunch and texture. I'm thinking of skipping bread and sprinkling kernels into my next bowl. 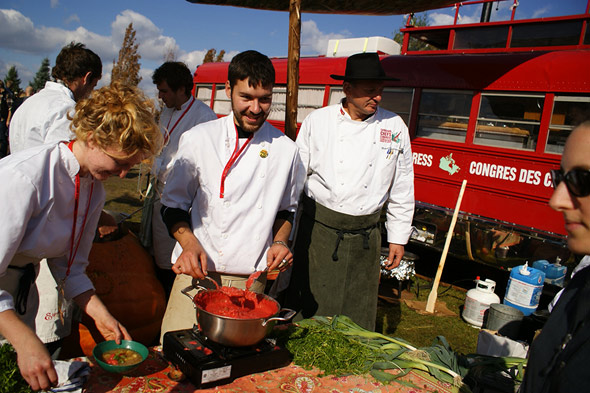 With 200 chefs on board there was a mix of traditional soups mixed in with bold moves. A few notable mentions: 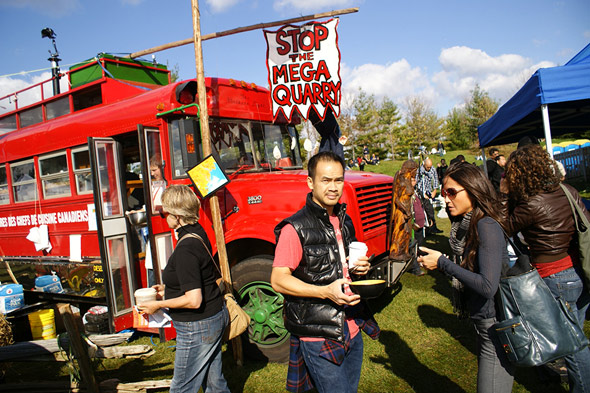 Best Bowl: There was a lot of ceramic floating around the event. But the best was the bread bowl. Buy one bread loaf, tear off the top, fill with soup and enjoy.

Best Story: Azzura's recipe for stone soup is based on the famous children's story. But the stone for this batch came right from the Highland farms.

The soup was the perfect Sunday lunch, but its cause is even more important. The land that the quarry would overtake is some of the best farmland in Ontario. It happens to have a ton of limestone underneath it that developers want to blast for. Not only does the project threaten the best farmland and the drinking water of a million Ontarians, it's an eyesore, the size of Orangeville and deeper than Niagara Falls. You can find out more about the plan and the next steps at the David Suzuki Foundation. 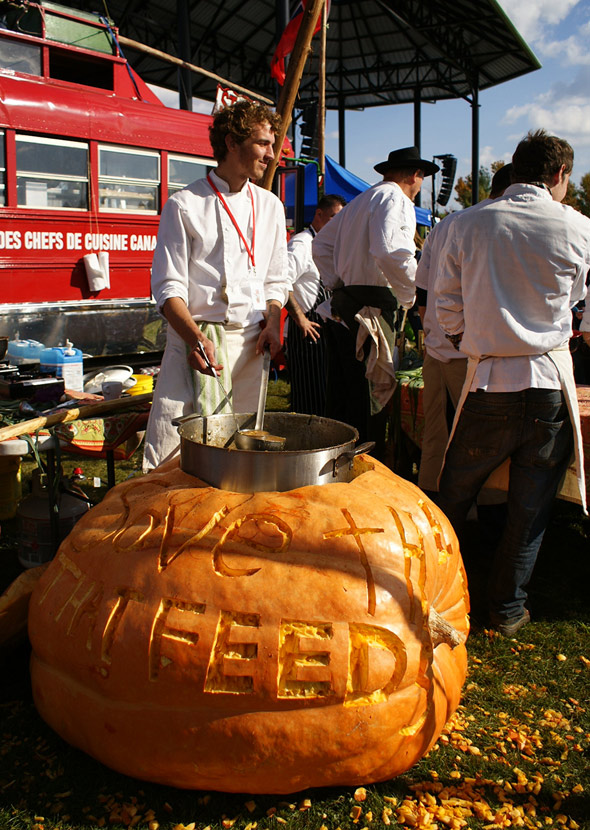 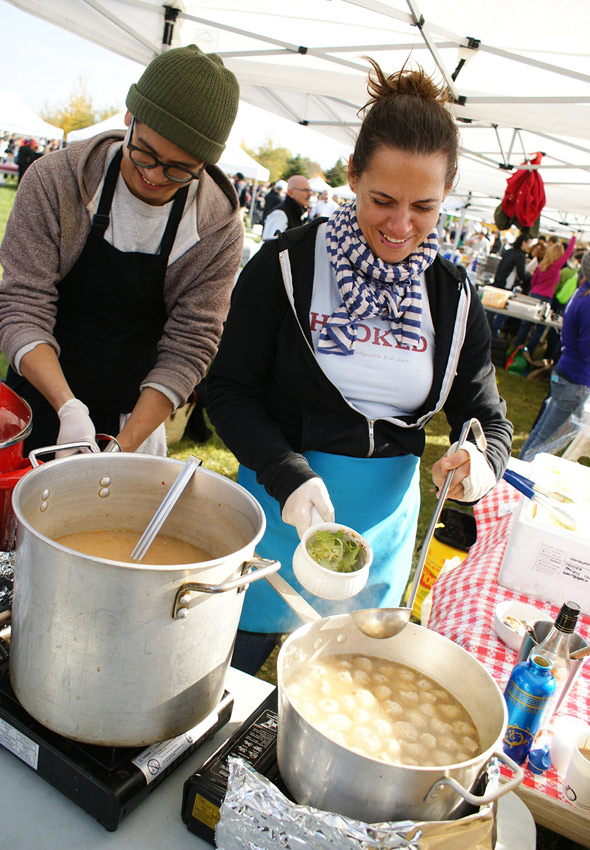 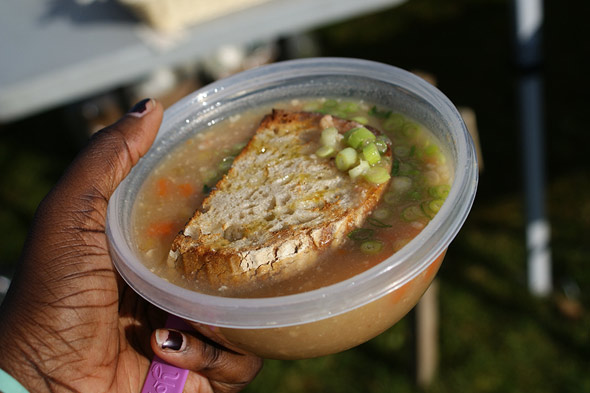 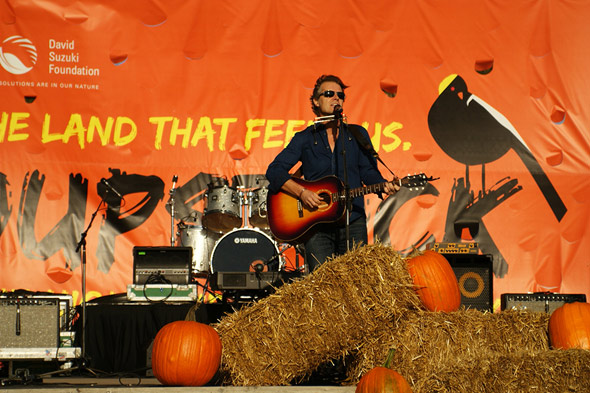 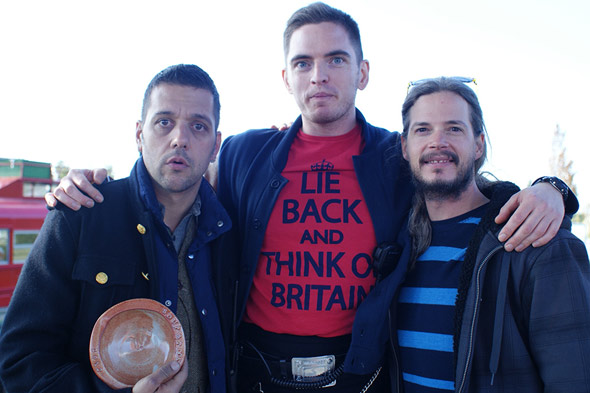