As we mentioned a while back, Amsterdam Brewery will be moving at the end of the month. Today Amsterdam revealed that not only will they be relocating their brewing operations to an industrial park in Leaside, they'll also soon be opening a brewpub on the Toronto waterfront.

As of November 1, 2012, production of Amsterdam's beer will move to 45 Esandar Drive, just east of Laird Drive and south of Eglinton. Amsterdam has revealed that this new brewing space will feature a sampling facility with over ten beers on tap as well as a cutting edge retail experience replete with a 400 sq/ft glass wall to allow for a view directly into the brewing facilities. The space will also feature a 2000 sq/ft event space for dinners, brewing seminars weekly casking events and corporate bookings. 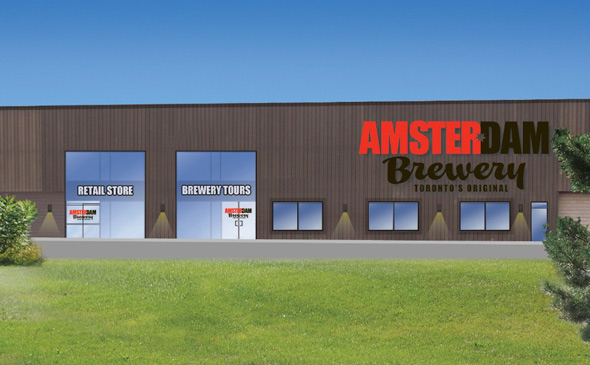 The move wasn't just prompted by a foreseen lease-expiry, but also a need to expand production in response to increased demand for their products--not to mention their clear plans for wider distribution. "We can't make enough beer to keep bars in Toronto stocked," says Iain McOustra, Amsterdam Brewmaster, "so if we want to expand more in Ontario or other provinces, we need bigger capacity."

The move also means that some of Amsterdam's lesser-known beers are going to get some much-deserved exposure in the space's new retail area, a prospect that's got McOustra, who recently shifted his focus to working Amsterdam's pilot system to craft more experimental beers, very excited.

"It's going to be pretty badass," he says.

Increased capacity will allow McOustra to brew larger quantities of seasonal beers and one-offs, those Amsterdam beers that may not have enjoyed a very broad audience previously. "The goal is to always have some experimental beers in the new retail space. Always. So when you walk in you may be there to buy a six pack of Blonde, but now you'll probably grab one or two experimental beers too."

Some of those beers McOustra hopes will get a broader audience include those in his "Adventure Series" of brews. A series much-lauded by the city's beer fans that has thus far featured a Berliner Weisse, a Smoked Porter, a Pale Ale, a Barley Wine, and even a sour cherry Imperial Stout, to name just a few. 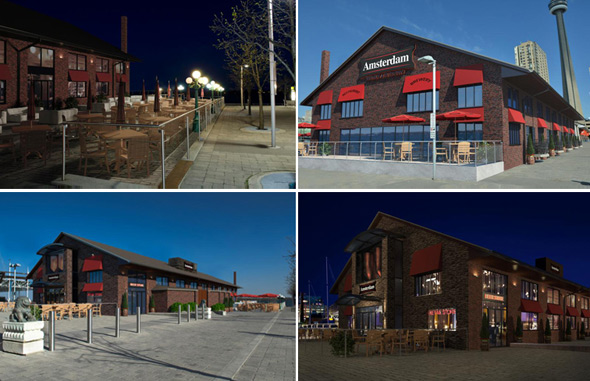 Following their move, in May of 2013, Amsterdam will also open a 900-seat restaurant and brewpub at 245 Queen's Quay West (near the Radisson Hotel) that will feature Amsterdam's specialty beers and a beer-inspired menu. The location will also function as the brewery's main retail outlet, offering Amsterdam's entire portfolio in every size. The brew pub will also host tastings, educational tours, beer dinners, special events, and what seems destined to become Toronto's best patio with a planned 300-person outdoor space directly on Lake Ontario. Details of the menu and management will be released sometime closer to opening.

The addition of a brewpub to Amsterdam's beer production echoes back to the company's past. Founded in 1986 as The Amsterdam Brasserie and Brewpub at 133 John Street, and followed shortly thereafter by The Rotterdam, a second brewpub location on King Street, one might say beer and food in the same place was part of the original concept for Amsterdam.

"We hope that through reflecting on our history and continuing our passion for authenticity, the brewpub will become a destination for the people of Toronto and it's visitors" says Jeff Carefoote, owner and operator of the Amsterdam Brewing Company. 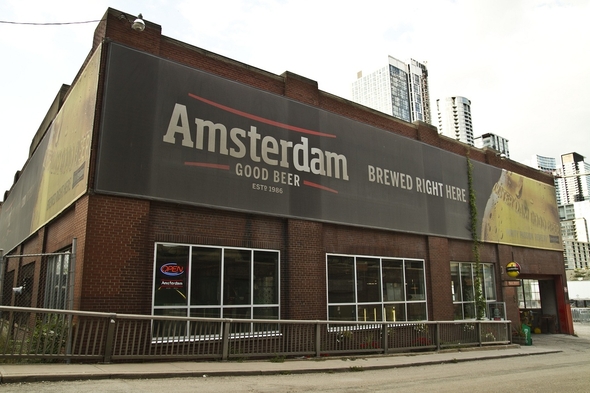 Since moving into their current space at 21 Bathurst, the company's focus has been squarely on beer production, but they always knew the location was temporary.

"This is a space that we knew had a shelf life when we moved in," says McOustra, "We were always aware that we'd have to move at some point" he says, and with the move to Eglinton and Laird and the announced brewpub, obviously Amsterdam's got their sights set clearly on the future.

In addition to the increased focus on retail sales, a broader distribution, and the obvious draw of being one of the city's handful of brewpubs, McOustra is confident the new exposure for the more complex beers he's passionate about is going to help create a big boom in the company's future. "I think these beers are what's going to take Amsterdam to the next level," he says.

He's probably right, but a brewpub with a massive waterfront patio probably won't hurt either.