Will a new Starbucks on Ossington kill the street's vibe?

The stretch of Ossington between Dundas and Queen has that intangible indie/creative vibe that makes locals squeal and east-enders unreservedly smug. But whatever the effect of Ossington's lauded je ne sais quoi, there's only one word that could bring it all into jeopardy: Starbucks (ok, maybe two if throw the word "condo" in there, but more about that later).

Yes, Ossington is poised to receive its very own Starbucks; the clichĂŠd community addendum that seems to say "there goes the neighbourhood" to those who call it home. Granted, this new Starbucks will be at the foot of the strip, situated at the base of a condo on Queen Street. Nevertheless, its presence will surely resonate up to Dundas and beyond. I can hear those Frappucino orders already.

But in terms of competition, it seems the cafes in the area aren't much concerned. I head to Ossington veteran I Deal Coffee, where my Starbucks questions are mostly met with shrugs. "We're catering to different clientele, I think," says the barista. "I don't think it will bring that much competition." 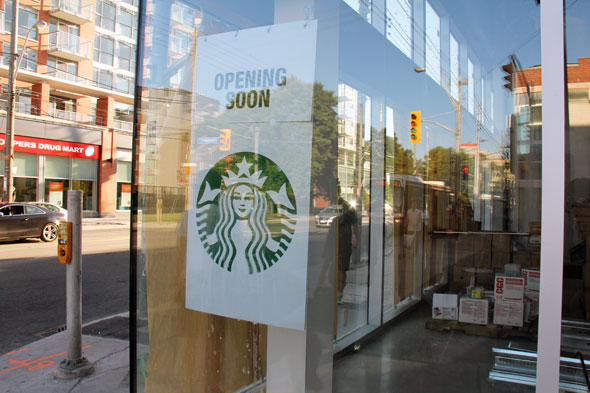 That sentiment is echoed by Scott at Crafted by Te Aro. "If anything," he says, "it will end up taking away from its own business." Indeed, there is a Starbucks already firmly planted at Queen and Dovercourt, so this new outpost will be but minutes away. Scott adds that he thinks some of the would-be disdain for the new Ossington Starbucks has been overshadowed by the condo project slated for the street. "In comparison," he says, "people don't seem to care much about the Starbucks."

Scott is referring to the new 109OZ condo project, which has certainly sparked its own "there goes the neighbourhood"-type discussion. The plan for the six-storey structure has already catalyzed community consultation meetings, petitions, and a resident association group called Smart Growth for Ossington. With that sort of movement, it is indeed easy to see how something like a little Starbucks might get overshadowed.

That said, some, including Dhani from Academy of Lions, are keeping a watchful eye on the progression. "Independent businesses are what makes Ossington great," he says. "The more we get away from that, the more we lose." But he adds that area residents, generally, are intent on indie shopping anyhow. "The neighbourhood decides with its dollars," he says. "I don't think we have too much to worry about."