The rise of large-scale beer brewing in Toronto

While last week I wrote about the Davieses, early brewery owners whose influence helped shape Corktown in Toronto's east end, it was still some time before brewing in Toronto could rightly be referred to as any sort of industry.

The Davieses were big in the brewing business, but in terms of their reach and distribution, both the Don Brewery and the Dominion were still essentially "craft" breweries. It wasn't until one man, EP Taylor — who some might call the anti-Christ of craft brewing — began to see the money-making potential in brewing that the industry in Canada really took off.

As a young man, Edward Plunkett Taylor, a businessman who is perhaps best known as a breeder of thoroughbred racehorses, was on the board of his family-owned, Ottawa-based Brading Brewing Company when prohibition ended in Ontario. Like Brading, a few other brewers in Ontario had managed to survive prohibition (mostly by selling their beer in Quebec) and as Taylor turned his thoughts to the money that might be made in brewing, Ontario still had no less than 36 competing breweries which produced more than 150 brands of beer.

After moving to Toronto, Taylor hooked up with a number of British investors and convinced them there was potential to make a lot of money by brewing in southern Ontario. As a result, on March 8, 1930, the Brewing Corporation of Ontario was born and, following an example set by National Breweries, who had bought out many smaller companies in Quebec over the decades prior, Taylor and the Brewing Corporation of Ontario began the task of buying up as many Ontario breweries as they could.

In one year alone, Taylor had overseen the acquisition of 10 breweries and 33 different brands and by the end of that year his renamed "Brewing Corporation of Canada" accounted for 26 per cent of all beer sold in Ontario.

For a very early local architectural example of the "rationalization" of the brewing industry that occurred following the end of Ontario's prohibition, one needn't look any further than Toronto's own Canada Malting silos on the waterfront at the base of Bathurst Street (which are now protected heritage sites). These no-nonsense silos — with their emphasis of function over form — are not only a great example of early modernist architecture, but speak directly to the new wave of large-scale thinking that was beginning to take over the brewing industry in 1928 when they were built. 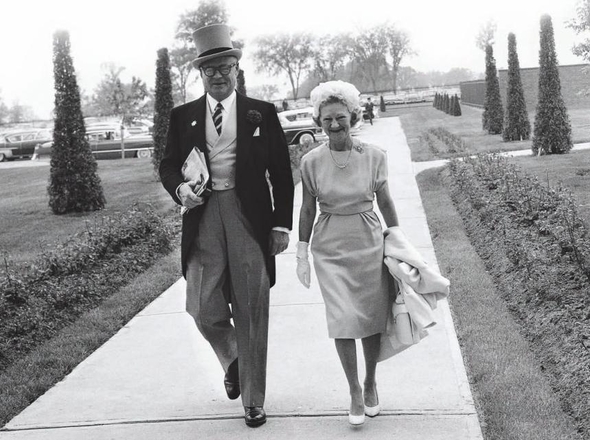 For phase two of his plan, Taylor began unceremoniously shutting down a large number of these breweries, firing their employees, selling off their equipment, and consolidating production of his once-again-renamed Canadian Breweries Ltd.

He drastically changed the brewing industry by focusing on large-scale brewing in fewer, more efficient breweries located in strategically chosen cities, and he limited the number of brands that consumers had access to. Out of the 16 breweries he had purchased, only six were now producing beer, and brewing just 27 brands--down from the over 50 previously produced by the brewers he bought out.

Following the second World War, when people once again had money to spend (and aided by the spread of the refrigerator), Taylor's monopoly was booming. And the other guys took notice. Labatts and Molson quickly adapted consolidation as a business model, buying up whatever breweries were left, or building new ones as needed.

By 1960, ten companies ran Canada's 51 breweries, and twenty-five of them were owned by either Molson, Labatt, or EP Taylor's Canadian Breweries — accounting for 94 per cent of all beer sold in Canada. This period, when the big brewers laid their roots in Canada and established the brewing industry as we know it, is largely when Canadians' beer tastes were defined.

All three companies responsible for the beer market responded to consumer tastes and, because the post-war consumer wanted milder, easy-to-drink brews, they gave the people what they wanted. Furthermore, given the switch to mass production of beer, less expensive adjuncts like corn and rice were added as a supplement to the brews to cut costs, making most of Canada's beer milder and sweeter, while the more complex-tasting beers previously brewed by Canada's smaller brewing companies all but disappeared. 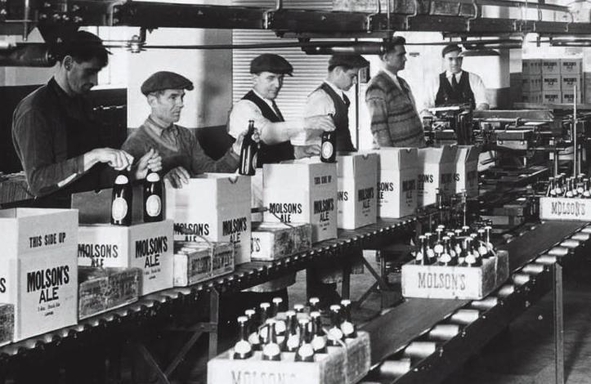 In March of 1950, Labatts introduced its Fiftieth Anniversary Ale (now just "50") and their Pilsner Lager Beer which, owing to its blue label, soon came to be known simply as "Blue." Meanwhile, in 1954, Molson also introduced a new lager, the first in the company's 170-year brewing history: "Crown and Anchor." The new beer was brewed at the plant on Toronto's waterfront and, in 1959, was renamed "Canadian." Taylor's Canadian Breweries continued to brew their Carling Black Label, which they had been brewing since they purchase Carling in 1926.

The result was that the majority of the beer brewed in Canada became simply safe. There was nothing remarkable about the beer's taste, but there was nothing that would offend anyone either. And, given that the era marked the beginning of a virtual monopoly for big brewers, not a lot has changed in their highly successful approach to brewing. You can, in fact, see how the consolidation of brewing in Canada which started with EP Taylor in Toronto has affected our beer choices today by simply looking at the taps next time you're at a bar.

Oliver Dawson, beer aficionado and host of The Beer Lovers Tour, a historical exploration of Toronto's brewing heritage (with beer!)

Image credits: All three images in this post were borrowed from the fantastic book, Brew North: How Canadians Made Beer and Beer Made Canada.