The Miller Tavern's patio is now open for the summer, though it's too early to tell if it's destined to become a place for celebration or drowning one's woes. We'll leave that aspect up to the Jays. But the new downtown patio — a stone's throw from the ACC and Rogers Centre — has got all of the pre/post-game drinks and eats covered, some of which are priced surprisingly low for a place so close to organized sports. For when you just can't stomach another $10 hotdog or ballpark beer, here are some of the details on Miller Tavern's new patio.

The Scene
Expect one rowdy sidewalk on nights after the game, with a patio that stretches along both Bay and Harbour streets with room for more than 90 fans (or else, innocent tourists who had no idea what they were in for). You can enjoy a gentle evening hum from the Gardiner (when it's not shedding concrete) and sidewalk shows in the form of streetside shenanigans. In shorts — everything you won't find at Miller Tavern's North York location.

The Eats
Miller Tavern, of course, is know for its formidable fish, but I'm told that the team is working on a special patio menu of finger foods. (Specially priced) items such as jerk chicken, quesadillas, charcuterie and more are planned to grace the outside-only menu, with perhaps a special fish item snagging the headline spot. Whether you opt for sharables or not, goat cheese antipasti and beef tenderloin beats a ballpark Frank every time.

The Drinks
First and foremost — the cheap ones. Miller Tavern is running a patio special all summer long where bottles of Heineken, Corona, Miller Chill, Coors Light Iced T are all $4.95, along with glasses of red or white wine and sangria. If you're keen on some afternoon pints, draught glasses and pitchers are $3.95 and $11.85 (respectively, of course) between 3 p.m. and 6 p.m. (includes Canadian and Coors). Now, for something a little more refined, there's Miller Tavern's extensive Manhattan list ($9-$11), though I think the summer begs more for a couple of mojitos ($11) and blood orange coolers ($10). 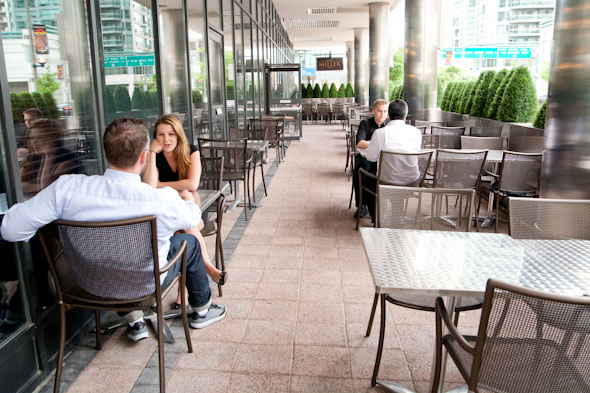 Key features
Chairs and couches, because nothing gets you in the mood for lounging quite like angry downtown traffic. Low tables and cushion-equipped seating are ideal for Miller's chocolate mousse dessert and fruit skewers, which is intended for patio-loving couples looking to take in the night air. Fingers crossed for a table that's not next to university first-years after the game.

And other details
Onsite parking is definitely a plus, though only for those who aren't planning to over-indulge in those $4 sangrias. The patio is covered (which means no smoking) and heat lamps are available for those occasional mid-summer temperature dips. The patio does take reservations (for now).