For further evidence that Toronto is having its street food moment (and this in spite of dated by-laws), one need look no further than the Stop's first annual Night Market. Joining TUM and the various Food Truck Eats gatherings, this new event has some impressive vendors lined up â think Brockton General, Cowbell, Hawker Bar, Great Lakes Brewery, the Stockyards, Ursa, Woodlot, and Yours Truly (to name a few) â and is ultimately all for a good cause.

Set to take place on June 20 from 7 p.m. to 11 p.m., the market will also breathe some new life into one of Toronto's iconic but underused spaces: Honest Ed's alley. With it's oh-so urban backdrop, it's the perfect setting for a night market. Well, that is if you don't mind close quarters. Here's betting it's going to get very tight in there once the proceedings get underway (which is kind of how it should be at a market, anyway).

Also worthy of note is that the food stalls will be hand built by a variety of local designers, including Brothers Dressler, Fugitive Glue, and 3rd Uncle. That won't make the food taste better, but it certainly ups the cool factor. And hopefully well designed stalls will make navigating the market a painless process.

At $50, the event isn't exactly cheap. But when you factor in that it's all you can eat and that the proceeds go to charity, it's hard to think that it won't be money well spent. For ticket info, check here. 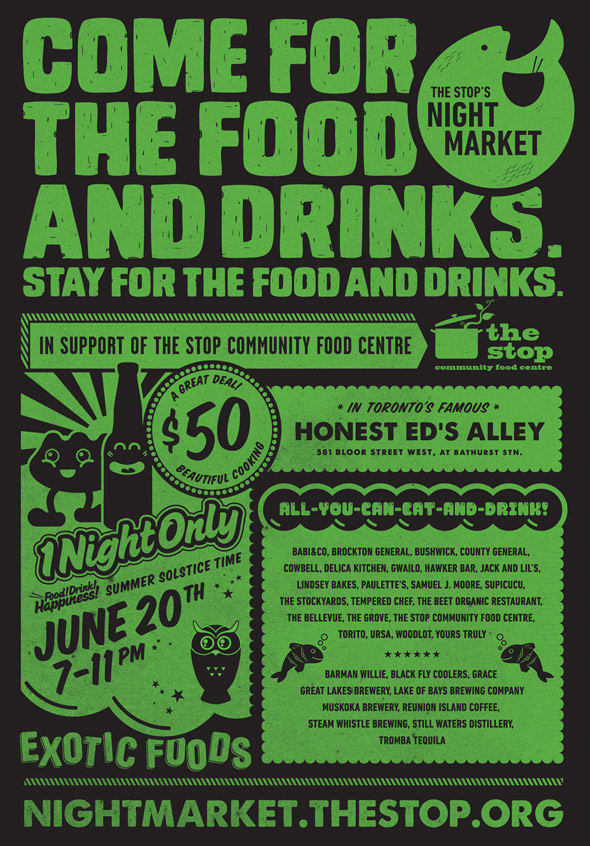