The sixth annual Terroir Symposium at the Arcadian Court drew over 400 guests, including chefs, food writers, wine and food experts and business leaders. Organized by the Brick Work's Arlene Stein, the annual shindig is becoming one of the top hospitality industry events around. With an incredible daylong menu, including a Chinese-Canadian lunch with the quippy title Wok & Roll, curated by Ivy Knight, and a line-up of international speakers talking about integrating food sustainability with haute cuisine, guests came for the lectures and stayed for the food. Or maybe it was the other way around (yes, the food was that good).

The New Radicals (the name of the event) was a celebration of a new era of top chefs who not only create mouthwatering fare, but who embrace their unique position to both educate the consumer and work with producers to steer the entire industry and food system in a more eco-conscious and socially conscious direction. So it was fitting that the food served for the day was local fare prepared by Toronto talents and New Radicals Matty Matheson of Parts & Labour, Alex Feswick of The Brockton General, Kevin Gilmour of The Drake, among many others.

It was the ultimate opportunity for foodie shoulder rubbing with the likes of Ken Friedman (music executive turned restaurateur and one of the partners behind The Spotted Pig and The Breslin in Manhattan), Australia's celebrated chef Ben Shewry, and Toronto's own illustrious food critic, columnist and editor, James Chatto, who was master of ceremonies for the day. 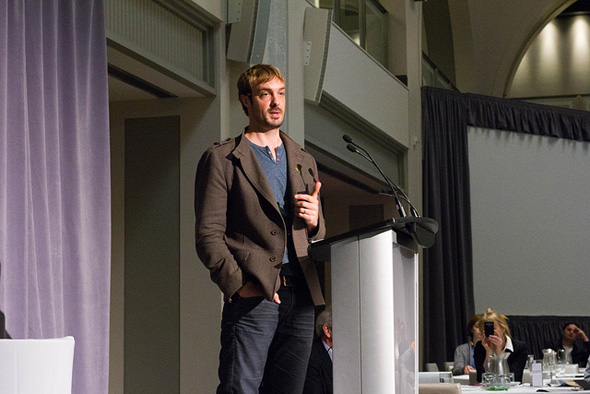 But the real show-stopping presentation came from seafood activist and chef Barton Seaver, whose impressive resume includes National Geographic Fellow, Esquire magazine's 2009 "Chef of the Year," Author of For Cod and Country. And all that recognition of his work is not for nothing - he's articulate, charming and smart as a whip. Though we've figured out how to farm fish sustainably, he said, there's nothing sustainable about serving all-you-can eat shrimp buffets.

"It's not just sustainable food, but sustainable eating," he said. "Having whatever we want all the time brings terrible unforeseen consequences - diabetes, obesity, environmental degradation." Since we can't simply create more fish out of thin air, the only solution for our rapidly depleting underwater ecosystems is to stop cramming our plates every meal with the catch-of-the-day and start eating more modest portions balanced with grains and vegetables.

Other highlight presentations included that of the chef and activist behind last year's popular Foodstock fundraiser to stop Ontario's mega quarry, Michael Stadtlander. Standing tall in a cowboy hat and a mint green shirt and speaking with a charming German accent, Stadtlander reminded the audience of the incredible, rich farmlands that are under threat from the proposed mega quarry north of the city. "The chef is the middle man between the consumer and the farmer, a powerful place to be in," he said.

After a very warm introduction by James Chatto, Stadtlander spoke proudly of last year's Foodstock that drew over 28,000 people, and said they will follow it up with another event this fall, Soupstock, on October 21st in Toronto.

Other speakers included Alice Feiring on natural wine, Tama Matsuoka Wong on the art of foraging, Lilia Smelkova on the slow food movement and influencing food policy, among others. We're on the cusp of a new way of interacting with food, and many of the people at Terroir will likely be the leaders who show us the way.