How Toronto craft beers get on LCBO shelves

The LCBO is about to increase its stock of Toronto craft beer. Coming soon to a liquor store shelves are cans of Kensington Brewing Company's Augusta Ale and Double Trouble's Hops and Robbers.

While Toronto beer fans should be excited that we'll now have a chance to take home a little more local variety from the city's burgeoning craft beer scene, the accomplishment is all the more admirable when one has a little knowledge of just how daunting the LCBO's process can be.

The first thing a brewer needs to do if he or she is interested in selling his or her product at the LCBO is apply to the LCBO's Trading Partner Access Request system (TPAR). Once your TPAR request is granted, you'll have access to various LCBO web-based systems, including the New Item Submission System (NISS). Once a brewer has access to NISS...

OK, you know what? I haven't even got to the official application part yet and the acronym count is already at three. The process is about as tedious and process-driven as one might expect from the provincial government. Essentially, getting approval from the LCBO comprises six complicated steps, each of which can take a month or more.

I'll spare you the specifics, but some of the things a brewery needs to do to get into Ontario stores include taste testings, multiple chemical analysis, marketing strategy evaluations, and the actual ordering of the beer (not quite as straightforward as it might sound). All of these steps are reasonable enough in and of themselves, but they take a lot of time.

It's enough to make you need a drink, really.

Despite all this, Brock Shepherd, owner of the Kensington Brewing Company, isn't discouraged. "My experience has been really positive," he says, "albeit daunting."

On meeting the requirements, Shepherd notes, "You need to navigate their system and learn their way. The beer and cider administrator Gisele [Renaud] has been amazingly helpful. They are very supportive of Ontario craft beer, so that helps a lot."

On top of starting Double Trouble with his longtime friend Nathan Dunsmoor, Claude Lefebvre is also the head of North American Craft, essentially a marketing agency that focuses on the needs of small craft brewers. Along with helping often new-to-marketing craft brewers with sales plans, North American Craft acts as the the agent of record for these brewers at the LCBO, so Lefebvre has some experience with the "jumping through hoops" that is required.

"You do have to go through a process, and it's a timely one, but it makes a lot of sense," he says. It's also not always as cut-and-dried as the outline I've provided. Sometimes any number of these steps can take a lot longer than expected; however, ultimately, it's worth the effort. Lefebvre notes that a large percentage of craft beer sales comes from the retail market and that's where he and Dunsmoor plan to focus their efforts for the time being. He notes that this provides them an opportunity to can focus on making and marketing their beer, then essentially "hand over the distribution to the experts, the LCBO."

Shepherd is likewise supportive of the process and notes that it could be worse. "I look at it this way, we could be like the U.S. with a wide open system, but then you have to deal with distributors, each individual store, etc. — more middle men. People may complain about the LCBO, but we've got it pretty good." 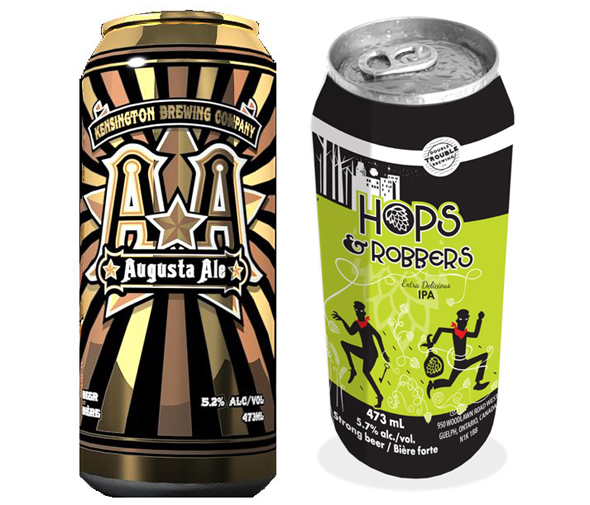 I suspect local beer fans will be happy to see these new additions to the LCBO's burgeoning craft lineup. Augusta Ale is approachable — i.e. not overly hoppy — and yet clearly different from the run of the mill big brewery stuff out there. Hops and Robbers, on the other hand, is a fairly complex golden IPA that brings a bit more bite to the table owing to the brewery's dry hopping with cascade hops. Not only are they made by small, local companies with a passion for beer, they're also both brewed under the experienced and watchful eye of brewmaster Paul Dickey at Black Oak's facilities.

Dickey has been brewing beer since 1986 and is currently a Grand Master Level One Judge with the Beer Judge Certification Program. He has brewed beer at Denison's Brewing Company, Pepperwood Bistro and Brewery in Burlington, and was the head brewer at the Black Oak Brewing Company in Oakville until he began his own venture, Cheshire Valley Brewing Company. Among others, Paul is responsible for the creation of the Black Oak Saison and Nutcracker, and Mill Street's Coffee Porter.

If none of that makes any sense to you, I'll summarize: This dude knows his beer.

And soon you'll be able to take home some of that beer. Shepherd estimates Augusta Ale will finally be available in stores in a few months and the guys from Double Trouble are optimistic that Hops and Robbers will be in the LCBO by May 2-4 weekend.

With a little patience, these local options should keep coming.