Origin Restaurant has enjoyed plenty of success on King East for the past couple of years, but it is now poised to expand over to the west, where a handful of restaurants of late just couldn't stay afloat.

Liberty Village has seen a curious number of restaurant closures over the past few months, wherein places such as The Liberty, Liberty Noodle, Chuck and Co. Cinquecento Trattoria, and Liberty Belle ended up closing their doors. The trouble with Liberty Village seems to be that of the nine to five; it sees an influx of professionals in the morning, many of whom leave after work in the early evening. Of the people who do live in the area, many are first-time homeowners who are tackling their first mortgages, and don't necessarily look to dine out several times a week or feel more comfortable at pubs like Brazen Head. Lack of parking and congestion only exacerbates the issue.

Nevertheless, there are restaurants that have managed to survive (and thrive) in Liberty Village, and Mildred's Temple Kitchen is just one such example. I chat with owner and chef Donna Dooher, who has watched her restaurant grow in Liberty Village since opening in 2008. "I think what we're seeing," Dooher begins when I ask her about the area's recent closures, "is the growing pains of a neighbourhood that is growing so fast."

"I think it's really important to do your homework to find out what product will be successful in that environment. It takes a bit of massaging, and we've made plenty of changes since first opening up a few years ago." 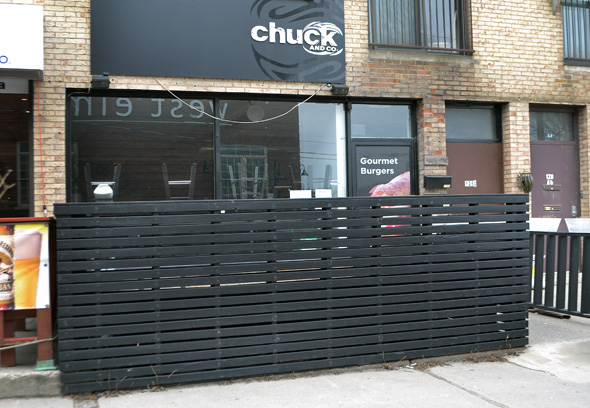 I ask Dooher about the nature of those changes and what she thinks it takes to run a successful restaurant in Liberty Village. "I don't know if there's really an answer to that," she replies. "Of course, people are looking for value, quality, and great service. But it's important to be mindful of what your competitors are offering. If you want to open casual, quick service â well, the Metro store offers a great takeout counter. On the other end, there are a lot of first-time homeowners in the area, and you have to ask if people from other areas of the city are going to drive here for fine dining."

As for the recent string of closures, Dooher thinks it amounts to nothing more than an unfortunate coincidence â an idea that is echoed by Lynn Clay of the Liberty Village BIA. "There's an ebb and flow that happens in any community," she says. "All of those places that have closed are being replaced by new restaurants that will be moving in. It's just coincidental."

Claudio Aprile, chef at Origin, is gearing up for his late spring Liberty Village opening. He isn't concerned about the area's recent restaurant closures, likely in part because he admits he hasn't really heard about them. "It's a fertile neighbourhood with a very affluent demographic," he says. "The menu is going to embrace the area." Aprile won't spill on what will make this Origin different from the others, but he does say it will be distinctly "Liberty Village."