Chiu Chow? Chao Zhou? Chao Shan? Teo Chew? Chow Mein? OK, I made that last part up. But seriously, it's no wonder that this cuisine is not more well-known around so-called mainstream circles, given that there are various different ways of calling it, based on all the different Chinese dialects and languages. This does not mean that the food is similarly confusing though. On the contrary, it is very clear. Almost literally.

In sharp contrast with the fiery and bold flavours of Szechuan cuisine, Chiu Chow-style Chinese food (CCC) has much subtler flavours. Many of them involve braising and marinating in soy-based sauces. As far as I can tell, they are almost never spicy and provide a nice change from the stronger-tasting food that I often consume.

Also, its relative obscurity also shields its name from random over-usage in Chinese restaurants. Unlike the Szechuan name which involves too many impostors to count, when you see the term Chiu Chow (or any of its 496 spelling variants) right beside a dish in a restaurant, it's likely that the food is at least somewhat genuine and faithful to the original cuisine. What may make things a bit tricky, unfortunately, is that many CCC restaurants do not explicitly identify themselves as such.

The influence of Chiu Chow food can actually be seen in many Asian countries which host a large number of immigrants from the Chaoshan region. In fact, I was surprised that many Singaporean-Malaysian dishes that are more Chinese in nature (such as Hainanese chicken rice) have been purportedly influenced by this cuisine.

Over the years I've have had the privilege of eating at some very good CCC restaurants, and I would like to share the ones that I know of here with you. Here are five Chiu Chow-style Chinese food restaurants in the GTA worth seeking out.

Chiu Chow Man (1177 Central Parkway West, Mississauga)
This long-established Mississauga favourite may not win any interior design awards but the food here is certainly medal-worthy. Each dish displays the characteristic subtle flavours that make them a pleasant contrast to the typical Cantonese-style cuisine one gets bombarded with in Markham and Scarborough. The oyster omelette is a must-try, and the classic mixed marinated meat platter (I call it the 3M dish) truly represents what Chiu Chow flavours are all about. Also worth ordering is the lobster chow mein. It looks sort of Cantonese but nobody said it's not ok to mix things up a little. 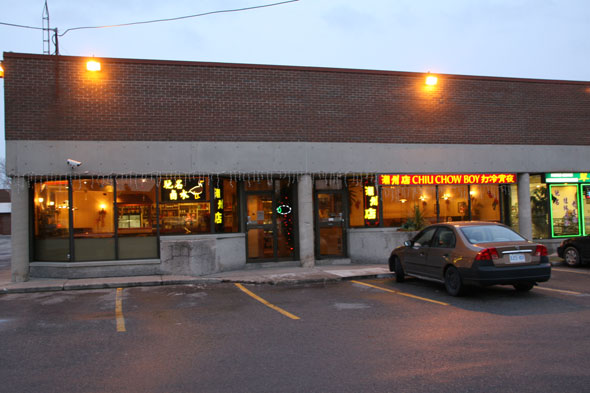 Chiu Chow Boy (3261 Kennedy Road, Scarborough)
This little place is NOT the answer to the question "who was Chiu Chow Man before he grew up". However what it actually is, is a well-established and well-run CCC joint in Scarborough, close to Pacific Mall and one that I have frequented for at least 10 years or so since it's located across from my old high school (take a guess which one). The quality has been consistently good through the years, something not to scoff at for a small place like this. The braised tofu with duck is extremely smooth and lovely, and the mixed meat platter is just as excellent as the one at Chiu Chow Man. Combined with their oh-so-delicious taro fried rice, and you've got a winning dinner combination.

Also make sure you try their chin jew chicken (not sure how to properly spell that out) as it is amazingly delicious and, I've been told by the servers, is a genuine CCC offering. Side note: their crispy fried squid, while not a Chiu Chow dish, is very delicious and much better than the better-known Congee Queen variety. The only downside is that this place is almost always packed during mealtimes and thus can get very loud, but at least the service is very prompt, if a little lacking (though still passable) English-wise. Not a place for a date, but definitely one for eating. 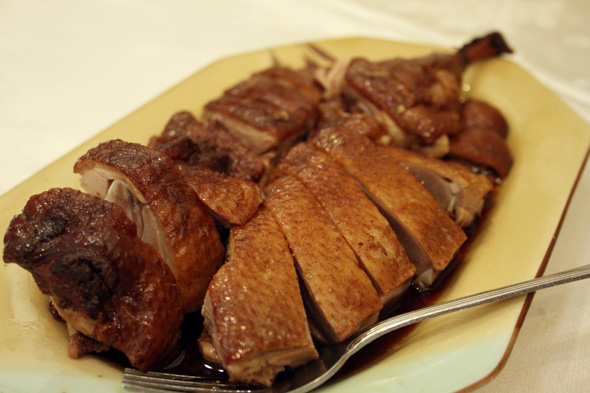 The Oriental Gourmet (633 Silver Star Blvd, Scarborough)
This place serves really good duck, seriously. For years, my only exposure to Chinese duck dishes were in the form of bbq duck legs or Peking ducks. I've never seen duck braised, mixed with soy sauce, or served in a soup, and boy did I miss out! This place has them all! They also have specials that seem to change often, which is great because you'll never run out of new things to discover. Of course, for this you'd need to be somewhat conversant in Mandarin, Cantonese, or Chiu Chow. However I found that the servers generally speak English quite adequately, if not great, and that's really all you need. Also, if you're looking for something a bit more soothing, try their wide assortment of noodle soups (In particular, the fish and preserved egg noodle). Beware: this place is jam-packed during weekend mealtimes.

Bayview Court (1070 Major MacKenzie Dr East, Richmond Hill)
Although it doesn't explicitly identify itself as a CCC place, Bayview Court serves quite a lot of CCC items and it's clear that this is their specialty. Definitely one of the more impressive-looking places compared to everything else on this list, this restaurant also appears to be the one that serves the most kind of non-CCC dishes. As such, it's probably the best place to go if you want a lot of variety, or just want to try Chiu Chow without overly committing to it. The chin jew chicken here is nice but not as flavourful as the one at Chiu Chow Boy. The variety of braised meat and tofu combination dishes are pretty much a-OK, without anything really standing out. Bayview Court is not exactly the cheapest option around which makes this arguably the weakest of the six on this list. They do get bonus points, though, for a unique decor and relatively fast service.

My Kitchen (9021 Leslie St, Richmond Hill)
A relatively new restaurant, this place serves up a combination of several types of Chinese cuisines. The most helpful part is the fact that the Chiu Chow section of the menu is very clearly labeled with an extensive offering of dishes (especially the marinated meats). I've tried the cuttlefish and the chicken with fish sauce and found them to be tasty in a classically understated sort of way. All I can say is that you can tell that the food is prepared with care, and the flavours blend very well as you slowly savour them. The marinated duck on rice is something that you must try. I can also recommend the Chaozhou-style fried shrimp and crab balls. The food is a little more expensive than most restaurants on this list but it's worth it.