Where to eat arepas in Toronto

The arepas available in Toronto are a diverse mix. A national dish of both Venezuela and Colombia, the arepa can be eaten as a side dish, used as a base for other ingredients or, as is most common, eaten like a pita and stuffed with everything from chicken and avocado to cheese, pork, egg, vegetables and more. There's even a sweeter dessert-type arepa sold at a couple of spots around town.

With the recent closure of Arepa Market, Toronto's arepa options may have been reduced by one, but they can still be had (usually for a very reasonable price) in various pockets in the west side of the city. Here's a round-up of some of my favourite spots to grab one.

El Arriero (Los Arrieros)
This quaint Colombian restaurant at the south end of Jane St. has walls adorned with traditional artwork and crafts and picnic table style seating which makes it warm and inviting. Here the arepas are billed as appetizers and cost from $4 - $10 but the large meat stuffed Arepa con Carne is arguably a meal in itself. My favourite is the Chicharon Con Arepa paired with a bottle of Colombiana soda. Yum.

Columbus Bakery
Columbus Bakery has a reputation as a great spot to grab fresh baked traditional pastries, as well as other South American delicacies. Most days this tiny spot is jam-packed with customers indulging in something sweet while others wait their turn at the counter. Arepas here are on the sweet side (think snacks/dessert, not lunch) with the arepa de chocolo ($2) made with sweet corn and farmers white cheese the star attraction. 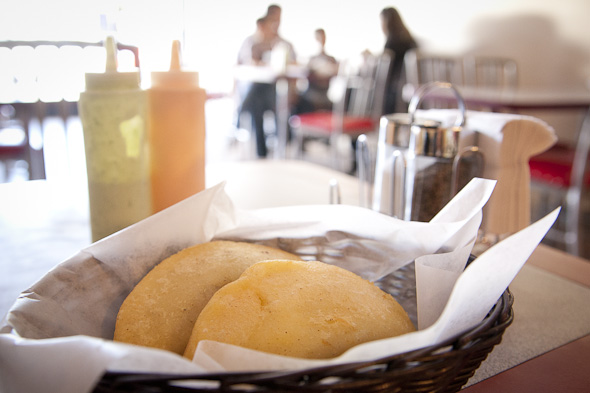 Rica Arepa
Found on Eglinton West (near Dufferin), Rica Arepa offers eat-in service but it's probably best to get the arepas to go. The menu features two arepa options - the Arepa Rellenas ($5) stuffed with your choice of meat, fish and vegetables and the Arepa Zuiliana ($8) with shredded beef, shrimp,cheese, ham, eggs and vegetables. I suggest a combination of the Arepa Rellena with chorizo, chicken and avocado. Hearty fried yuca is available as a side.

Arepa Cafe
Possibly the most well known areperia in Toronto, Arepa Cafe has been thriving on Queen West since 2009. It's probably safe to say that for most Torontonians, Arepa Cafe is their first introduction to this versatile little corncake. The arepa menu here is comprised solely of the stuffed version of this dish with an impressive 21 options including octopus, roast pork and shredded flank steak. Prices range between $6.50 and $9.75 and wash down well with one of their raw brown sugar can lemonades.

Arepiando
Located across the street from Colombus Bakery on Dufferin, Arepiando offers several unique variations on the arepa such as the Hawaiian with ham and pineapple. The main difference here is that the arepas themselves are made with white corn which results in a slightly crunchier texture and nutty (almost bland) flavour. For home cooks, Arepiando conveniently sells frozen Arepa shells made on site that can be bought in bulk. Prices range from $2 for the Arepa Con Queso (cheese only) to $7 for the Arepiando Arepa which comes stuffed with virtually everything on their menu and topped with a hard boiled quail egg.

Mi Tierra
Mi Tierra is one of the largest authentic Colombian restaurants in the GTA. On St. Clair West, this traditional dining room offers an extensive menu of Latin American favourites as well as regular nightly entertainment. Here there are two arepa options: a $5.99 arepa served with your choice of toppings (egg, avocado, bacon or Colombian sausage) or the big-spender $9.99 Arepa Con Carne or Con Pollo, which consists of a large arepa topped with either strip loin steak or chicken along with tomatoes and onions.